Today we took the morning to explore the Grand Pré Historic site and hike some of the trails around the Wolfville area. 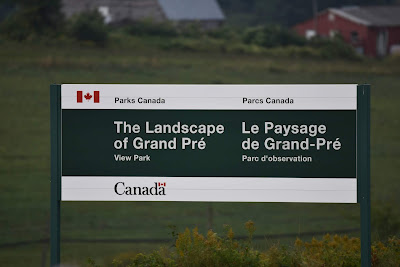 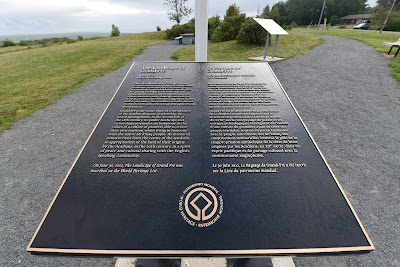 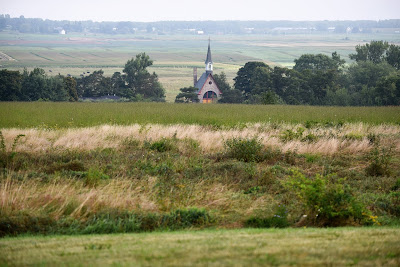 Soren and Pia very kindly dropped us off at a lookout point above the National Historic Site, which gave us a panoramic view over the landscape of the Grand Pré, which was designated as a UNESCO World Heritage Site in June 2012. The tidal salt marshes between Wolfville and Hortonville were settled by the Acadians in the 1680's. They built dykes to hold back the tides of the Minas Basin, drained and desalinated the marshes, and turned them into rich fields for their crops and pastures for their animals. The evidence of these settlements can still be seen on the landscape, and there were some amazing "before" and "after" photos to help with interpreting what we were seeing. 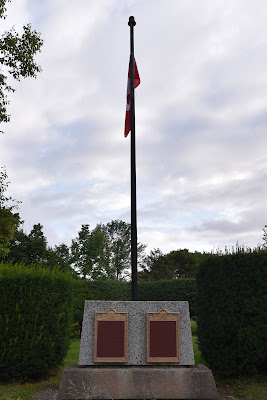 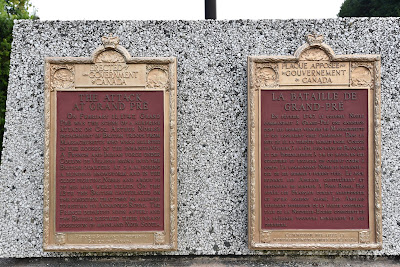 From the lookout we walked down to the National Historic Site. In the interpretation center we watched a short film which told the story of 'Le Grand dérangement' of the Acadians in 1755. During the Queen Anne's War and later King George's War the Acadians sought to remain neutral, refusing to fight for the French, and refusing to sign an unconditional oath of loyalty to the British. During the French and Indian War, the British forcefully deported the Acadians in an effort to interrupt the supply lines the Acadians were providing to Louisberg, and to minimize threats from the Mi'kmak. 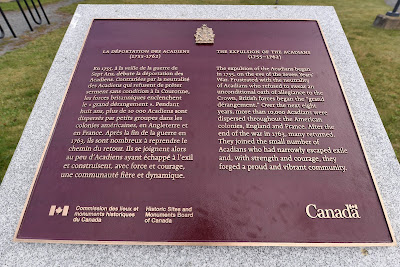 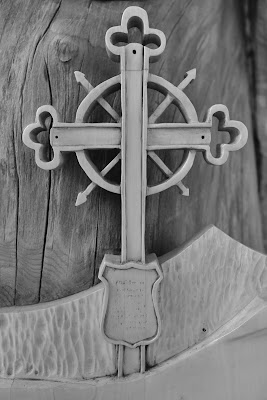 The film was very interesting, and we learned a lot about the Acadians, which are such an important part of Canadian history. I had previously thought of these unfortunate events as the result of a conflict between the French and British. I came away seeing that the situation was far more complicated, involving at least five groups - the French, British, Mi'kmak, Acadians, and New Englanders. Each group had their own interests, and events were also influenced by the large and powerful community of Boston.

We also learned a lot from the displays that showcase what life was like in Acadia around the time of the expulsion, as well as detailed displays of what the area looked like and how the dykes were built. 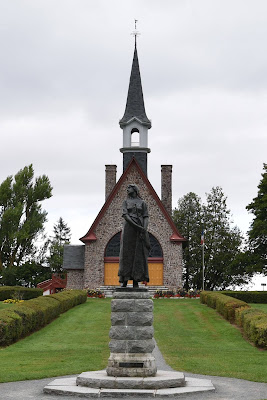 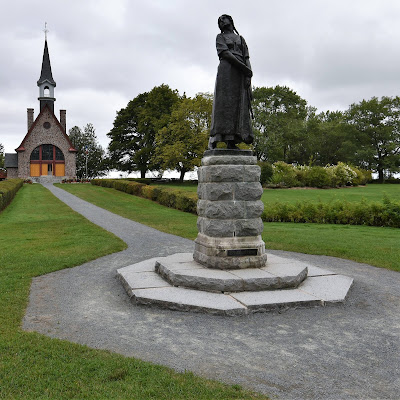 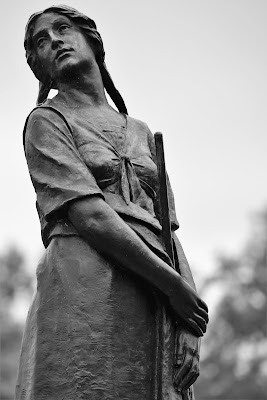 At the site we also enjoyed walking through the beautifully landscaped grounds, and seeing the statue of Evangeline. This fictional character is the heroine of the poem Evangeline, written by Henry Wadsworth Longfellow in 1847 in the US. This poem is credited with bringing the story of the Acadians to the attention of the English speaking world. 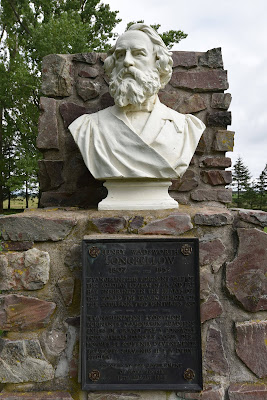 Our final stop was the St. Charles des Mines Memorial Chapel, which is also located in the grounds. This building is neither a recreation nor a restoration, but was built to act as a museum and interpretive center. It housed some thought provoking and graphic paintings depicting scenes from the expulsion, as well as a beautiful stained glass window designed by the artist Terry Smith-Lamothe. Apparently when the sun is shining on Sept. 5th, the anniversary of the expulsion, the window creates a line of red light that splits the chapel in half, representing how the lives of the Acadians had been brutally shattered. 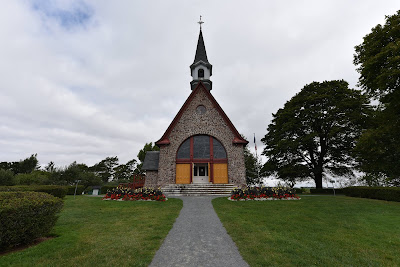 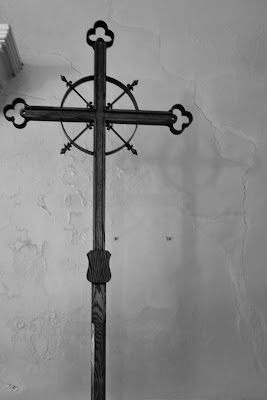 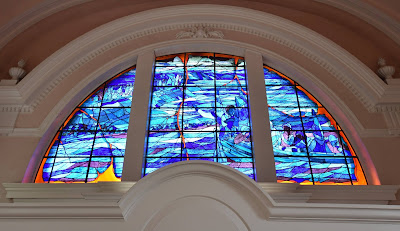 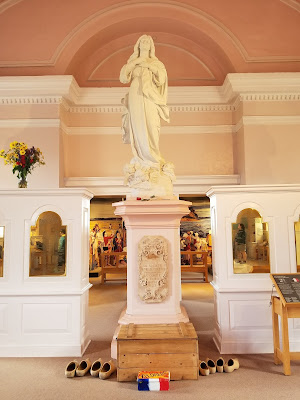 We were also delighted to learn more about the Stella Maris. This symbol is part of the Acadian flag, and represents the 'star of Mary.' According to an article from 1884 in 'Le Moniteur Acadien' "The star, Stella Maris, which is to guide the little Acadian colony through the storms and shoals, will be in the papal colours, to show our inviolable attachment to our Holy Mother Church." We have just learned about and followed the signs for a small Canadian Camino from Musquodoboit Harbour to the Cathedral in Halifax, that was dubbed the Stella Maris, so we were very happy to learn more. It also came at a good time, when two of our friends are currently on the Camino, one just finished, two are about to leave in a few days, and another is seriously considering going back. Once you begin to follow those little yellow arrows, you find them everywhere! 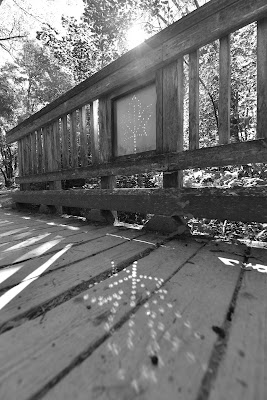 After our visit to the National Historic Site we followed the King's County Rail Trail back to Wolfville. This was a lovely, flat, gravel trail that was well used by hikers, joggers, and cyclists. It provided beautiful views out over the bay toward the towering red cliffs of Cape Split, and offered an opportunity walk the dykes left behind by the Acadians. 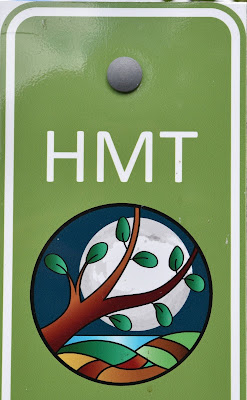 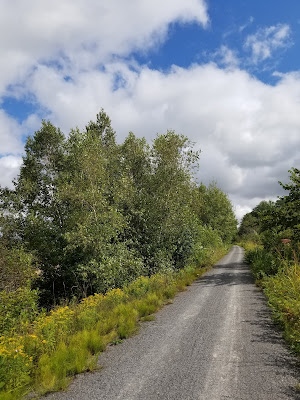 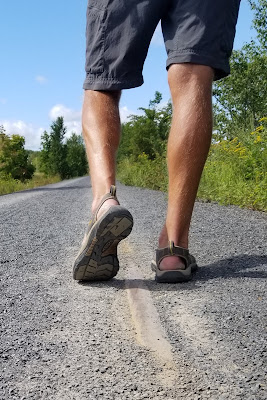 Another neat thing we found along the way was an Uncommon Art project, where small plaques were left on certain trees along the side of the trail, and people were asked the question - what would you say to this tree? 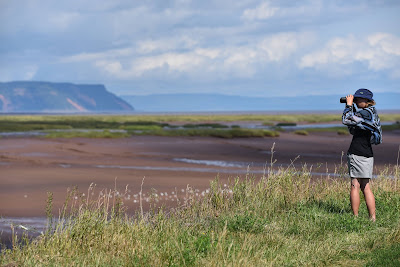 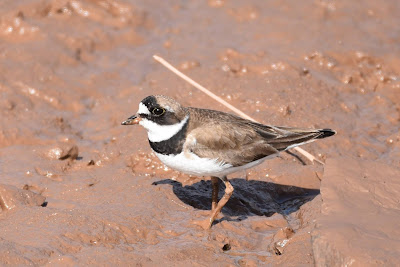 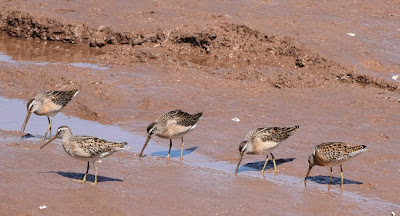 When we reached the outskirts of Wolfville we came to a boardwalk with a gazebo and a small picnic area with a nice view of the mud flats. There were Ring-billed Gulls, Black-backed Gulls, several Greater Yellowlegs, a small group of White-rumped Sandpipers, and quite a few Short-billed Dowitchers. 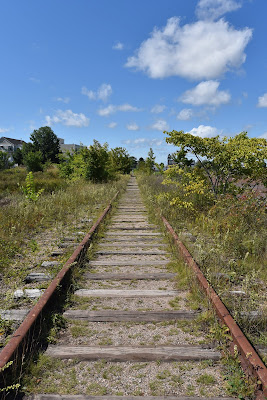 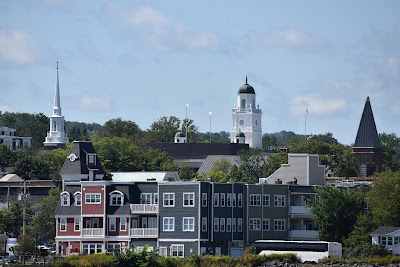 We enjoyed exploring and discovering the natural and cultural history of this region. Tomorrow we are headed to Annapolis Royal to give another bird talk.
Posted by Sonya and Sean at 2:39 PM