Today we began our hike across Prince Edward Island in earnest. It felt great to be back on the trail and moving forward once again, although even that had a twist, since the day ended with us heading east once again. We didn't end up getting too far, but that's okay. We certainly had lots of fun! 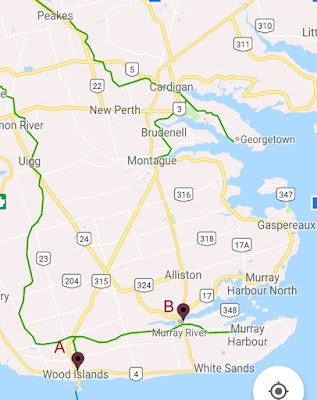 In this smallest of Canada's provinces the Great Trail follows the Confederation Trail, which is a 435 km shared use walking and cycling trail in summer and a snowmobile trail in winter. It is a rail trail with a gorgeous rolled stone dust bed, that never exceeds a 2% grade. The main trail begins in Tignish at kilometer 0 and extends to Elmira at kilometer 273, but there are branches that stretch out into the rest of the province as well. So far the section we've hiked has mostly been a beautiful treed corridor, but the trail's description promises views of picturesque rolling hills, charming villages, and expansive seascapes, as well as opportunities to experience local culture, music, food, and Canadian heritage. Apparently there are also over 1600 geocaches to be found along the trail, and it is part of the International Appalachian Trail. We can't wait to explore! 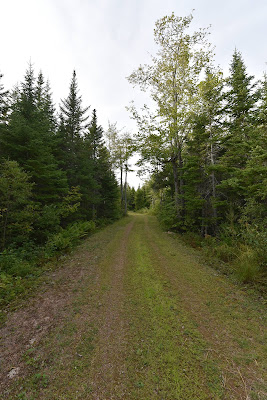 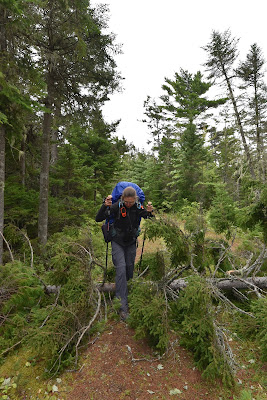 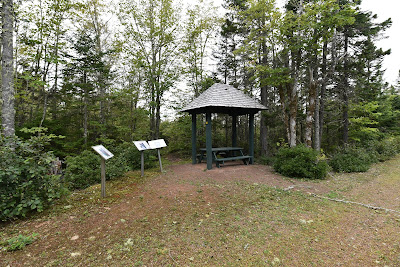 We woke up around 6:30 am to the loud blaring of the ferry's horn in harbour. The little ferry can certainly command attention when it needs to! This wakeup call was followed shortly by the demanding squacks of a group of Blue Jays, so we decided it was time to get up. We knew there was rain predicted for later in the morning, so we made an effort to have breakfast and pack everything up while it was still dry. 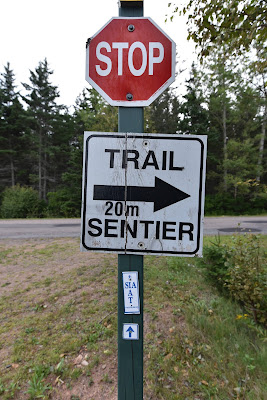 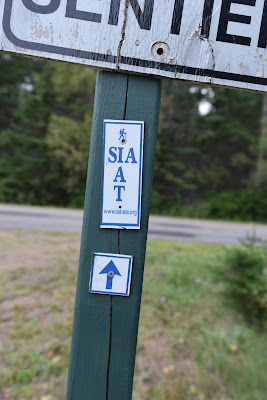 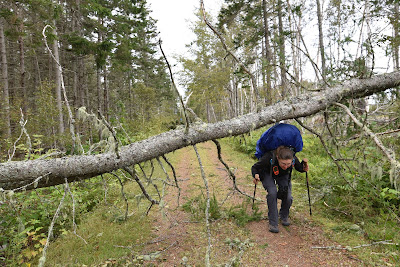 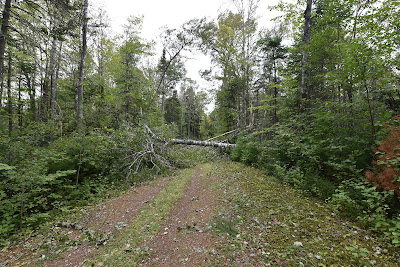 As we set off down the beautifully treed trail, we soon realized that Dorian had left a bit of an obstacle course in his wake. In the first kilometer there were just over 20 large trees down across the path that we either had to crawl under or climb over. 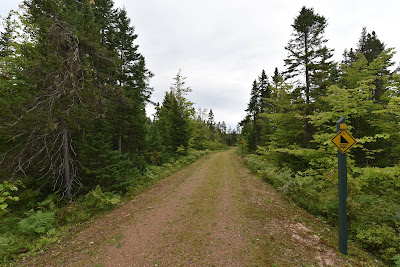 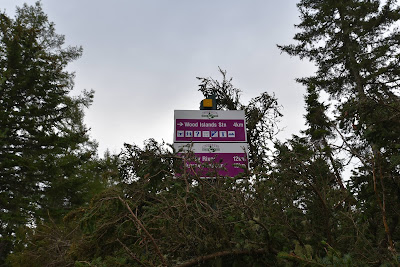 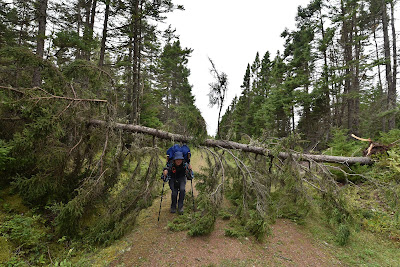 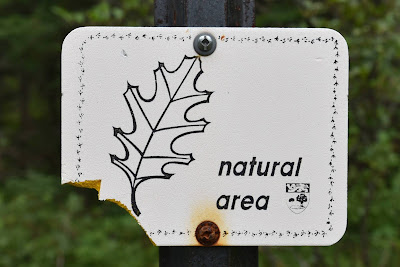 We had been warned by fellow hikers that water is not readily available along the trail, and that the few sources which do exist may be contaminated by pesticides, making it best to ask for drinking water from local residents. Normally this would be okay, but at the moment quite a bit of the island still has no electricity or water. In this situation, we don't feel right knocking on someone's door to ask for 4 or 5 litres of water when it is not just a matter of turning on the tap. 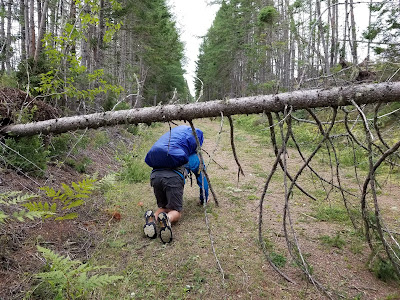 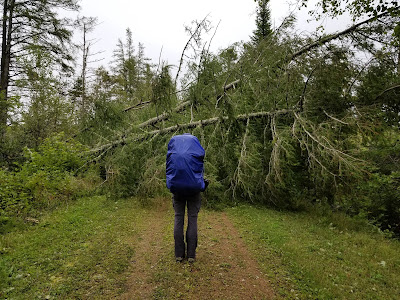 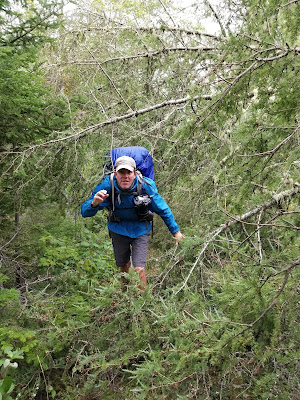 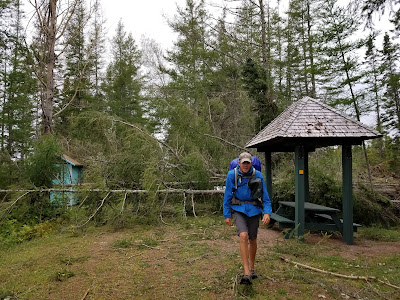 We weren't quite sure which parts of the island have had their utilities restored and which haven't. Strangely, as we were picking our way through the storm debris a man and two dogs appeared on the trail ahead. He said he didn't have water or power yet, and as far as he knew parts of the center were still out, but that the eastern part of the island was back up and running. Since we do have a few extra days to spend on PEI, and we wanted to explore a bit more of the island anyway, we decided to walk east towards Murray River. 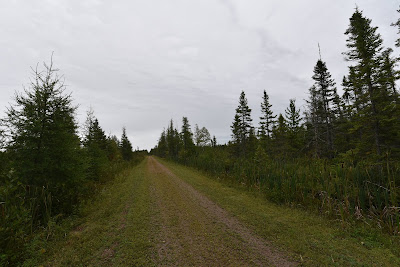 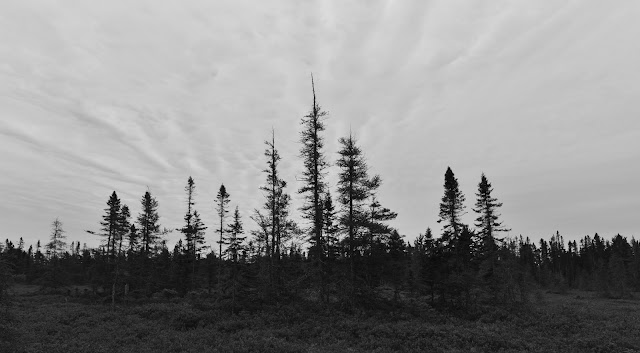 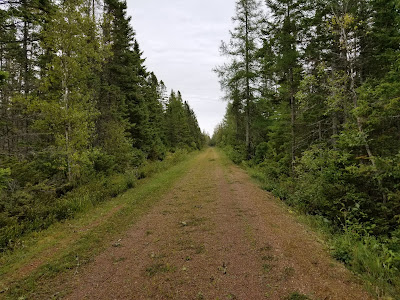 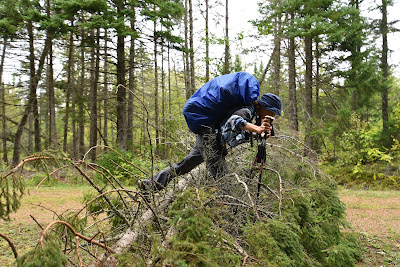 The trail took us through forested sections, past small ponds with near perfect reflections, along the edge of fields with reddish blueberry bushes and rows of blond grain, and through small sections of marsh that fondly reminded us of Newfoundland. 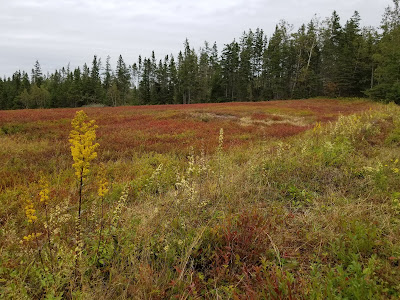 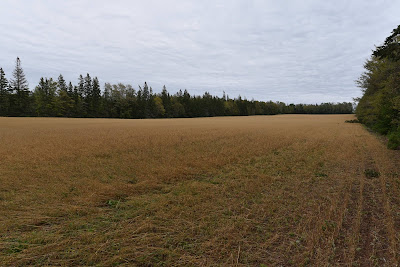 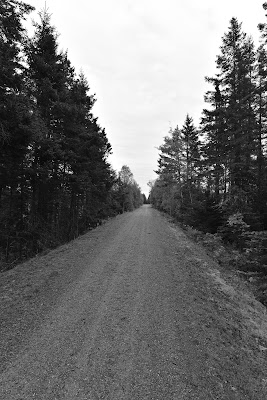 As we hiked we passed multiple shelters with picnic tables under them, lots of interpretive signs and benches, and a spotlessly clean bathroom. Large trees had fallen all around many of these structures, but none of them looked damaged.  This is a real testament to the workmanship of the volunteers and trail associations that built the infrastructure. 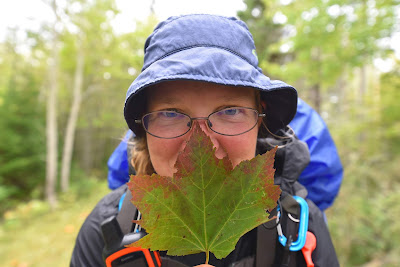 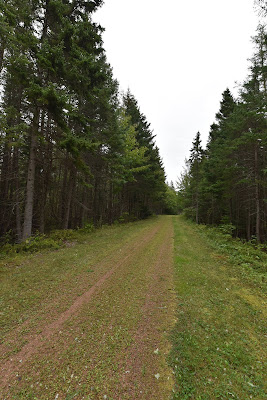 By the time we reached Murray River, around 12 km from where we started, we had climbed over, under, or around 109 large trees. We were in good spirits, and still enjoying the challenge, but our legs had begun to feel like jelly and it had started to rain quite hard. We decided to find a spot to camp and explore Murray River. 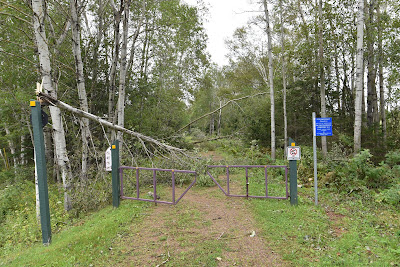 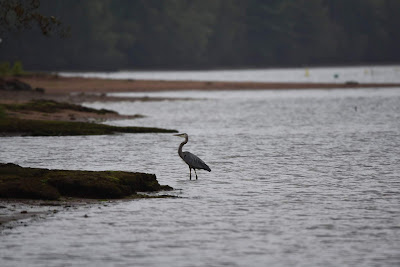 This turned out to be a lovely community on the edges of the river it is named after. There is a restaurant, a craft shop, a cafe with goats out back (sadly it was closed), and a convenience store. Along the shores of the river were at least four Great Blue Herons, a flock of Double-crested Cormorants, a Belted Kingfisher, and many gulls. As we hiked today at least three separate groups of mixed warblers swept past us. Among the individuals we could spot were many Yellow-rumped Warblers, Black-throated Green Warblers, and Dark-eyed Juncos. We wished them all safe passage on their long journey south.