Charlottetown: Exploring the Arts and Culture of a Coastal Capital City....

Our day began with a visit to the CBC Charlottetown. Bryson was kind enough to drive us over, and we found Mitch Cormier waiting for us on the trail behind the building ready to brave the chilly wind in order to interview us. We would like to thank CBC Charlottetown and Mitch for giving us another great opportunity to share our story! 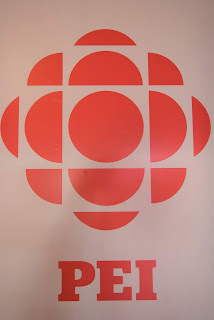 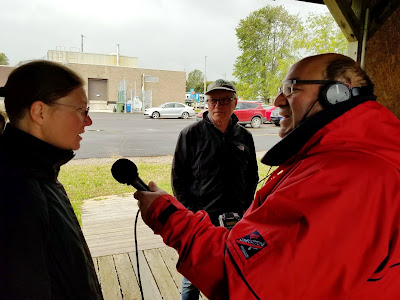 After the interview we headed out to explore downtown Charlottetown on foot. 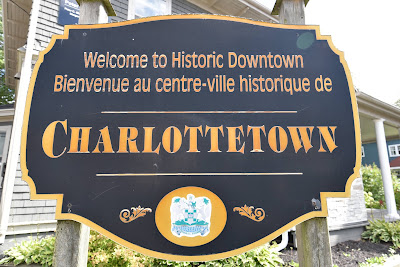 Our first stop was the Confederation Center for the Arts, which is a modern looking building dedicated to showcasing the visual and performing arts.  Upon entry we were warmly greeted and encouraged to photograph the artwork and share it.  After having much of the museum explained to us, we headed upstairs to the gallery section, and were greeted first by an artwork display created by local school children that explored the connection between people, nature, and the world. It seemed highly relevant to the message of our hike, and was very well executed. 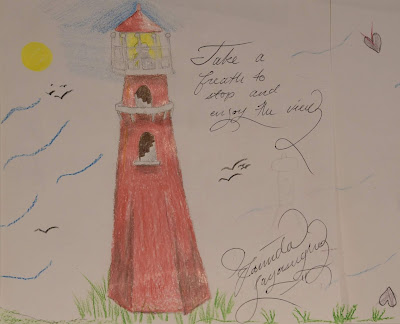 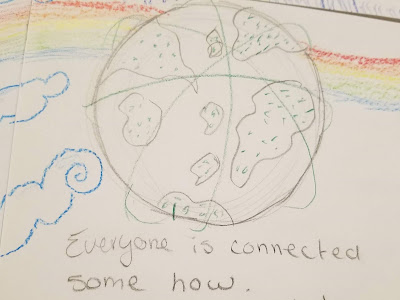 We also got to view an exhibit of paintings and photos that explored the relationship between fiction and reality. Many of these pieces showed a picture within a picture, sometimes many times over. 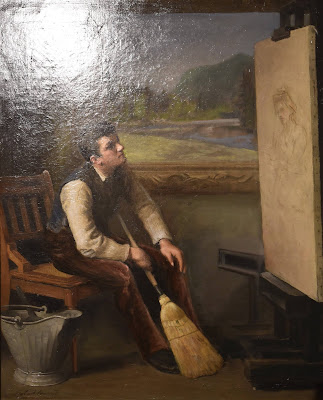 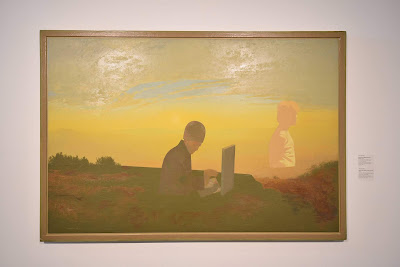 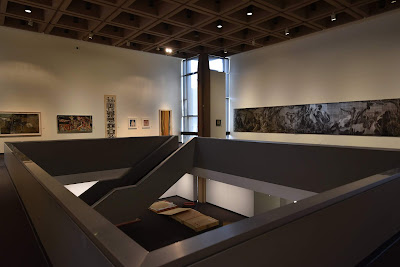 The collection of works by Phillipa Jones explored the moment of death, and featured many bird images, which were very intriguing. My favourite part was an interactive piece consisting of many hanging acrylic balls filled with natural objects such as flower petals, pine cones, and milkweed fluff that were hanging from the ceiling. Visitors were encouraged to lay under the hanging balls and look up to experience a sense of calm. It was curiously effective! 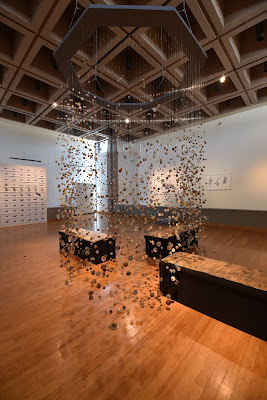 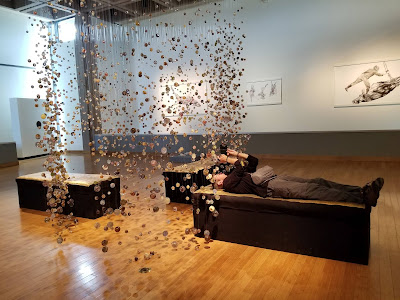 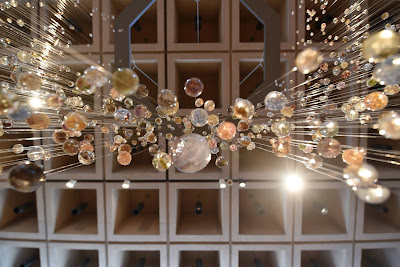 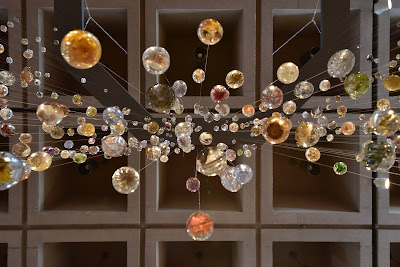 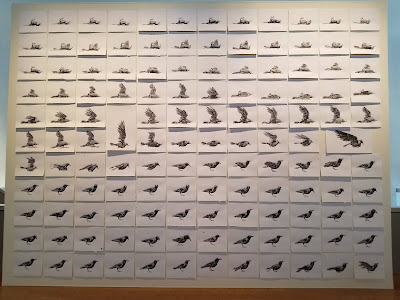 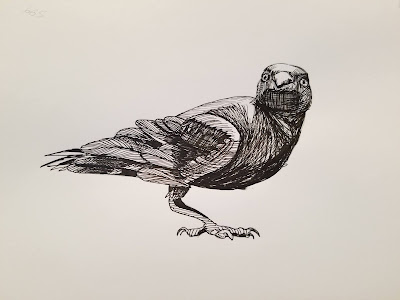 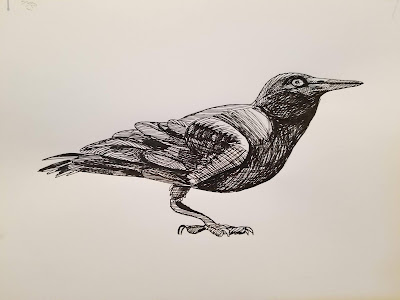 Downstairs we took in sculpted installations by Ian Funke-McKay that were brightly coloured collages of figurines, symbols, emblems, and patterned backdrops. I'm not sure I understood or appreciated these pieces, but to me they seemed reflective of our times - very bright and loud and all mixed up. 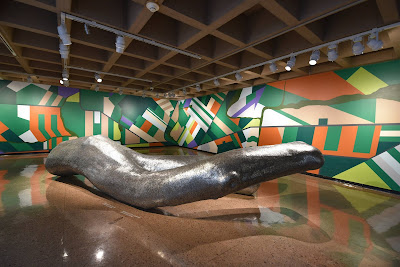 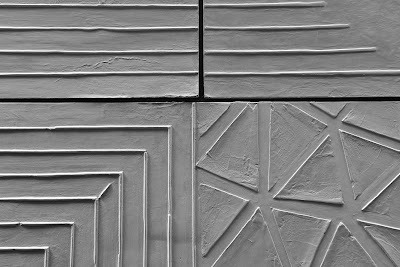 Since the Province House National Historic Site is currently closed for restoration work, we had hoped to visit the temporary Story of Confederation exhibit in the Art Gallery, but sadly there was a large conference going on in the space and it was closed to the public.

Province House is an important landmark for PEI and Canada because it is the birthplace of our Confederation. On July 1st, 1867 the British colonies of the Province of Canada, Nova Scotia, and New Brunswick were united into the Dominion of Canada. During the process of Confederation the Province of Canada was split into Ontario and Quebec, meaning the new Dominion had four provinces. Since 1867 Canada has become a sovereign nation, and seen many territorial shifts and expansions, resulting in it's current configuration of ten provinces and three territories.  Our nation has a fascinating history which everyone should take at least some time to learn about and explore.  Who we were is who we are and helps us understand where we are going. 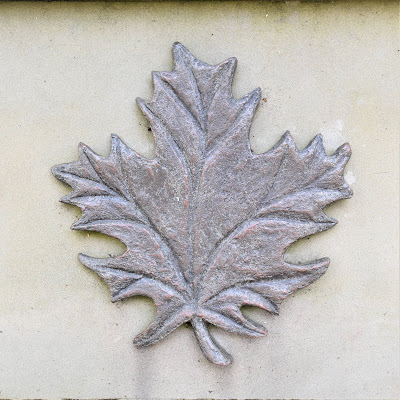 After visiting the Art Gallery we headed to a coffee shop downtown to speak with Zach Metcalfe, a freelance conservation journalist. Zack is relatively new to birding but working hard to build his life list, and I learned a lot about birding PEI from him. It was an interesting interview, and we'd like to thank him for talking to us and sharing his stories.

As we walked around town today we noticed it was a lot busier than yesterday, and when we made our way down to the waterfront we discovered why. There were four huge cruise ships in the harbour! We nonetheless walked the waterfront boardwalk, investigating the souvenir shops selling PEI dirt shirts and local crafts, the food stands, and of course Cows Ice Cream. It was a lively, beautiful, and vibrant waterfront.

Given the size of the crowds we set off to find Joseph Ghiz Memorial Park to find the historic plaque commemorating the conception and development of the Trans Canada Trail here in Prince Edward Island.  For two people now dedicated to a 3 or 4 year long hike across Canada from Coast to Coast to Coast along the Trans Canada Trail's successor, The Great Trail, we found it an inspiring place to spend some time.  We are constantly amazed by the vision, and dedication of trail builders and path volunteers who tirelessly work to ensure that everyone has the possibility to explore Canada. 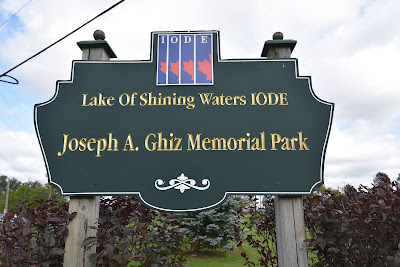 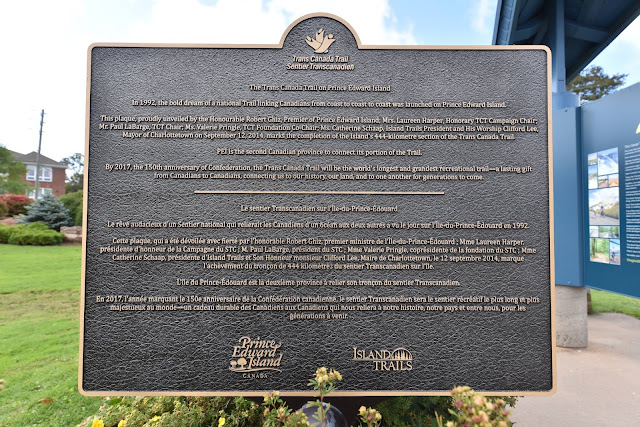 We eventually turned back downtown and took the opportunity to visit St. Dunstan's Basilica Cathedral, which was designated a National Historic Site of Canada in 1990. It is named after the Anglo Saxon saint from Glastonbury who served as Bishop of Canterbury, and who helped restore monastic life to Britain and reform the church. It is a beautiful building that was built in 1919, shortly after the original structure burned down in 1913. 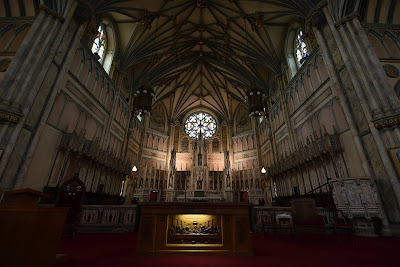 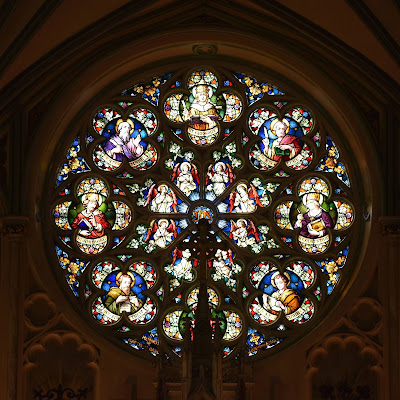 We also visited the Trinity United Church, which is a very tall, impressive looking structure. The ceiling inside is wooden and is shaped like the bottom of a ship turned upside down. It soars upwards, leaving space for a large balcony. The inside of this building was colourful and artistic. 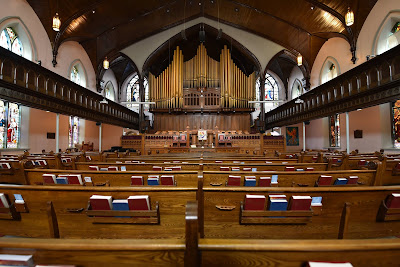 After our walking tour of the city we headed back along the waterfront, enjoying beautiful views across the harbour from the boardwalk. There were lots of people out jogging, walking, socializing, and enjoying the warm afternoon sunshine. 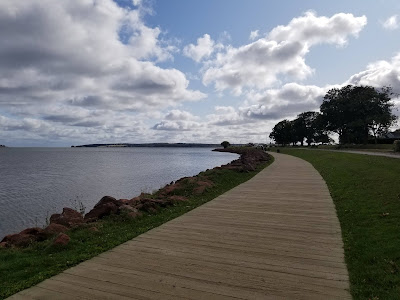 After a few hours of working on our presentation, we headed back out to see the lights of Charlottetown. We wandered for a few hours, enjoying the historic buildings, heritage houses, and tree lined streets. 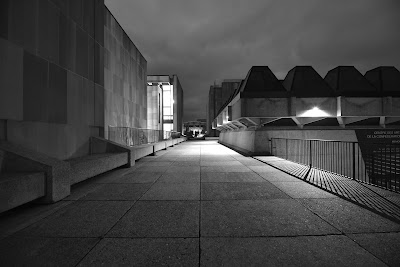 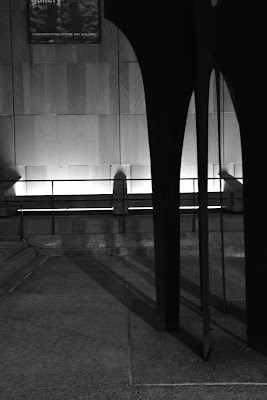 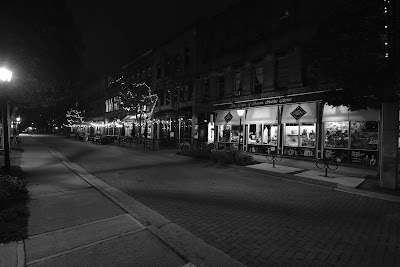 Eventually we ended up in the Old Triangle Pub to listen to a group of 8 or so local musicians play their fiddles and various other instruments. They were seated at a table, and when their glasses were filled they would play. Many people were enjoying drinks from the local breweries and cideries, and it was a warm and lively atmosphere. I think that as we cross the country Charlottetown and Prince Edward Island will continue to occupy a special place in our hearts.
Posted by Sonya and Sean at 2:33 PM