This morning began with a conversation about connections. The lady who hosted us last night was describing how bad the mosquitoes had gotten in Port Elgin since the bats disappeared. She noticed that the dragonflies got much larger once bats were gone, and then they became less abundant too. A few years ago there was an oil spill off the coast of Newfoundland, which wiped out a lot of the marsh birds. People used to visit Port Elgin to go birding, and now they don't anymore. She said scientists and politicians tended to look at the math and the statistics, but it was different for those who lived the reality. This left us with lots to think about. 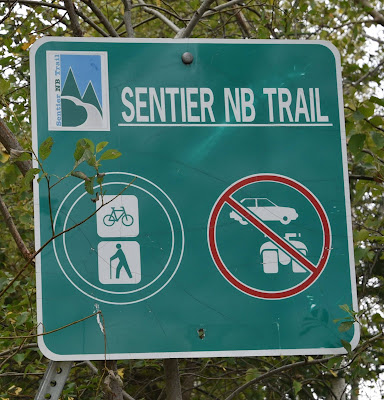 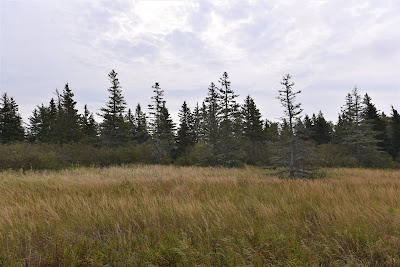 Once we headed off down the trail we were delighted to find that it was a beautiful, clean, flat trail that was free of downed trees. The wind was strong, but the trees on either side of the trail provided some protection. 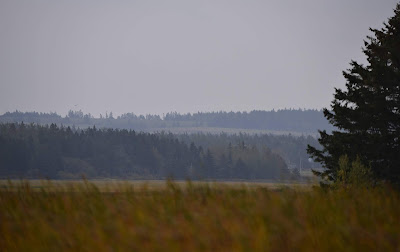 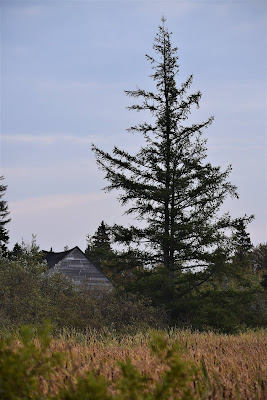 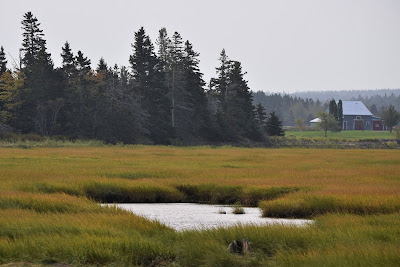 As the morning progressed, the sun peaked out from behind the clouds, bringing out the fall colours in a blaze of glory. When I was in high school one of my teachers said that in fall you could see all the warmth and sunshine that had been collected in the leaves of the trees, and that the memory of their blazing colours would carry us through the dark, cold winter until spring. We kept this in mind as we walked today. 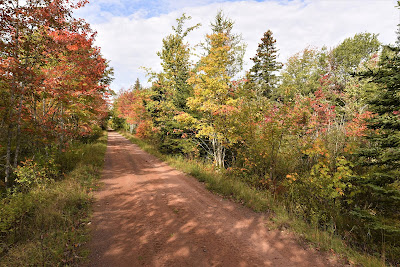 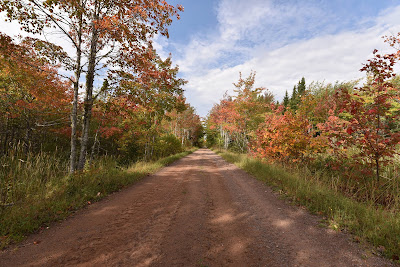 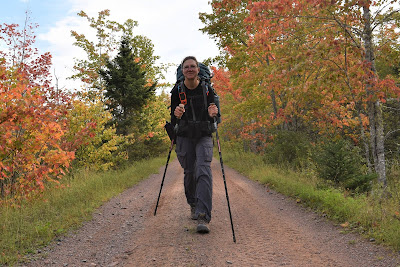 The trail took us through young regenerating forests, marshes, and clearcut areas. In the afternoon the landscape transitioned to fields of mown hay, with lovely barns and cows.

Today was a long walk, but it was filled with interesting signs of wildlife. We saw lots of moose and deer tracks, many colourful caterpillars, and quite a few garter snakes. 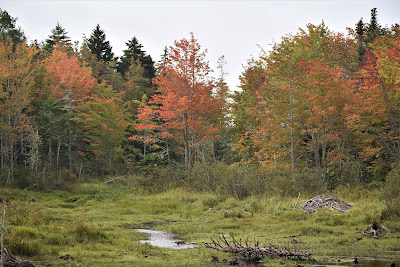 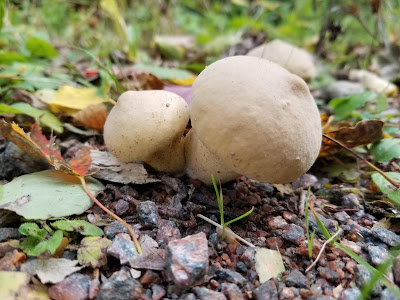 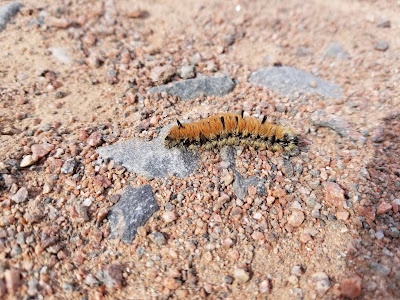 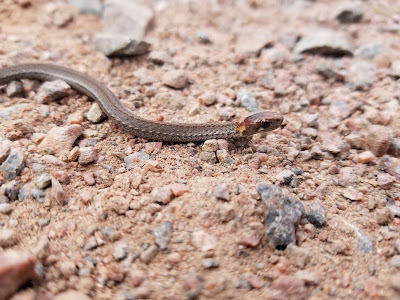 There were also many different bird species to keep us distracted. In the morning we stopped in a section of trail with a stand of dead trees that had been killed off by a beaver dam. They were hopping with birds, including Palm Warblers, Black-capped Chickadees, and Yellow-rumped Warblers. As we watched, a magnificent Spruce Grouse strolled across the path! 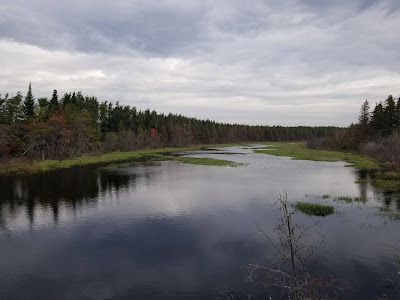 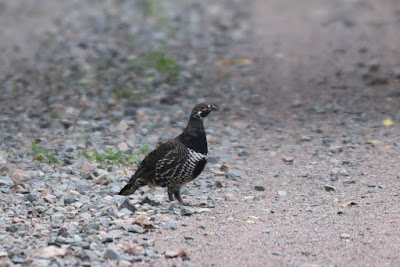 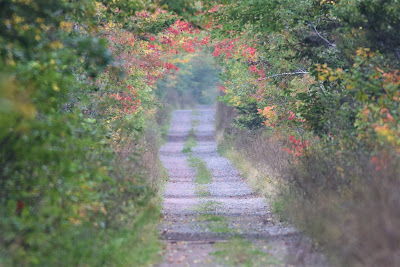 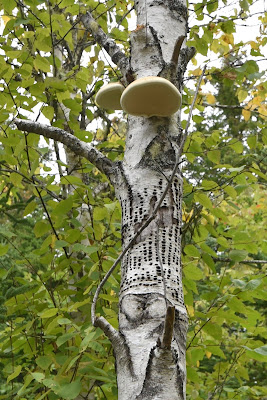 A bit later in the day we came to a beautiful trestle bridge over a river that was covered in Double-crested Cormorants. There was a Great Blue Heron fishing in the marsh below, and a Belted Kingfisher was circling above, occasionally emitting his loud rasping call. The surrounding marsh was full of resting waterfowl, but they were to far out to accurately identify without a scope. 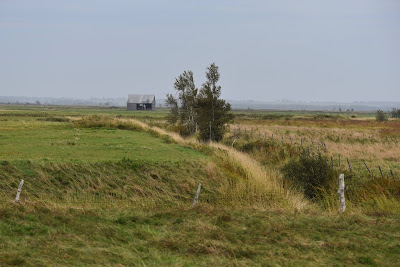 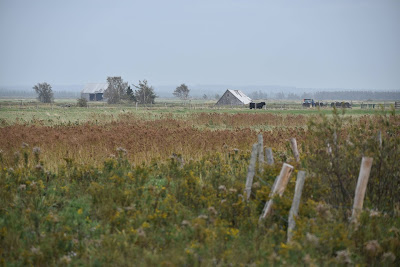 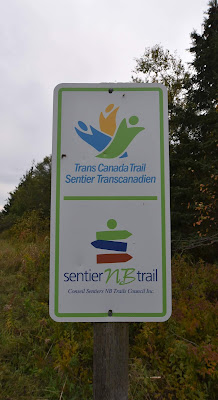 As we approached the outskirts of Middle Sackville we passed hay fields with many staging Canada Geese. As we walked, a Northern Harrier swooped low over the fields, the loud call of a White-throated Sparrow sounded once, and several American Crows flew by overhead, straight as an arrow. One of the more unusual sights was a group of four Ring-necked Pheasants sprinting at full speed across a field. 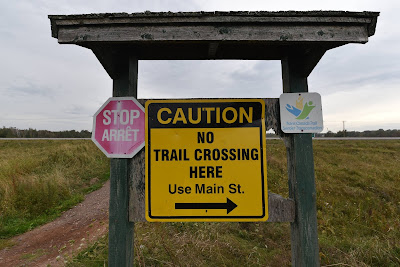 Just as we came to Sackville the trail crossed the Trans Canada Highway. Officially the map showed a 2 km detour to an overpass down the road, but it was tempting to try to cross the busy road. In the end we made the detour, which ultimately brought us around to the Sackville Waterfowl Park. 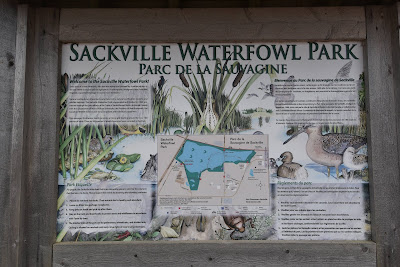 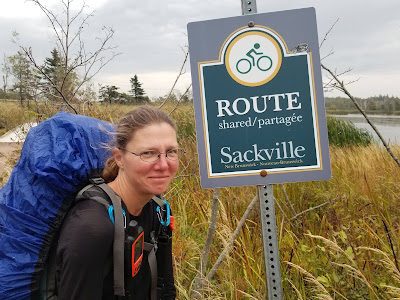 We were very tired by this point, and there was a dark cloud threatening rain. However, we couldn't resist stopping along the beautiful boardwalk that ran the length of marsh to see the ducks in the water. Among the highlights were an American Widgeon, a small group of Gadwalls, and several Blue-winged Teals. 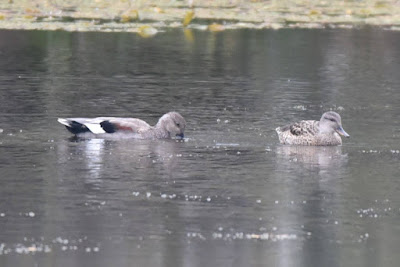 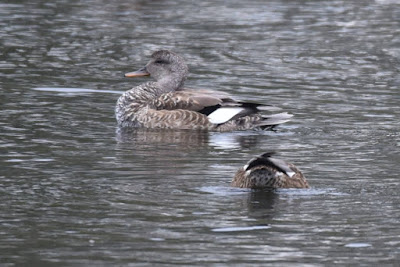 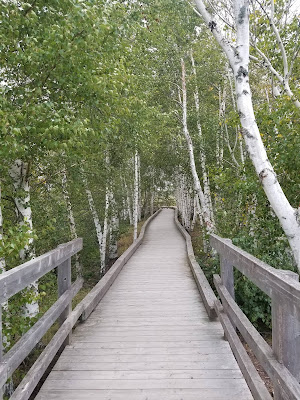 When we arrived at Eva and Frank's house we were greeted by an enthusiastic if slightly shy welcoming committee who had put together a fantastic welcome basket! 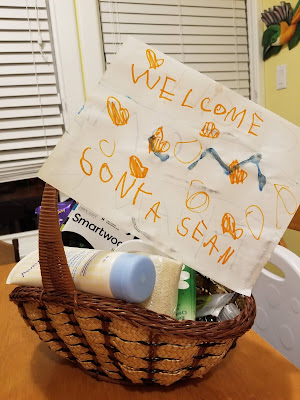 We were treated to a lovely dinner, and an evening of wonderful company, laughter, kid-energy, interesting conversation, and kindness. As the rain pours down outside, we are left once more feeling very grateful for the kindness and generosity of all the people who have helped us along the way.