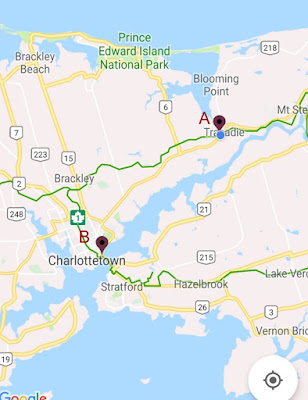 We began the morning by making breakfast indoors, using an electric kettle to boil the water, which accomplished this simple task far quicker than our twig powered stove does, and seemed far more civilized. It also gave us another chance to chat with the British cyclists we met last night, who were heading to Charlottetown as well. 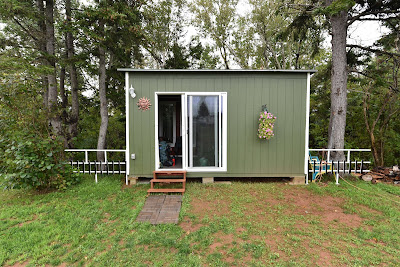 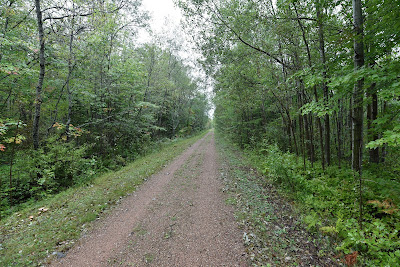 Shortly after 8 am we set off down the trail, full of optimism. We were in for a real treat today - the main part of the trail had been completely cleared, and we didn't need to climb under, over, or around a single tree! The work of volunteers and the province in cleaning up the hundreds of trees that blocked the 435 km of trail on PEI is truly amazing! We greatly appreciated it. 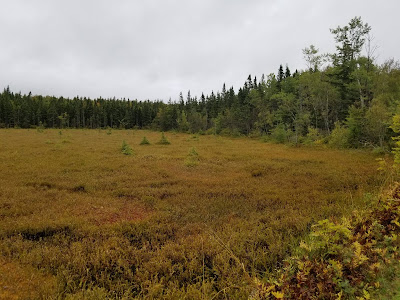 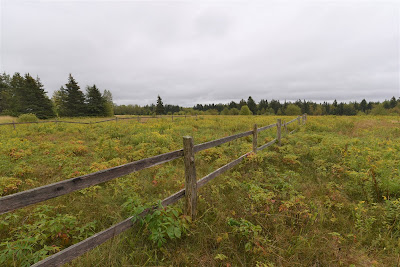 Today's walk took us through more pastoral landscapes, offering views of rolling hills, fields of golden soybeans, and even a field of orange and white pumpkins! Fall truly has arrived. 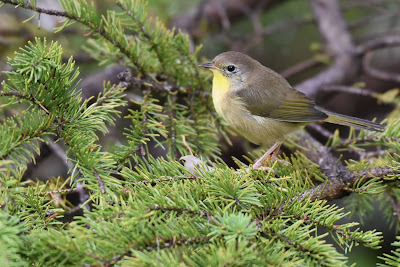 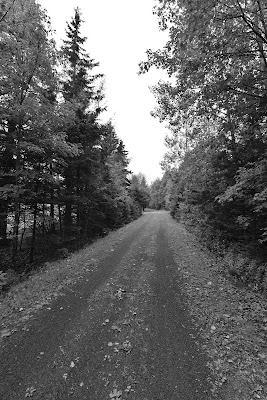 Around 10 am it began to rain. At first it was just a light mist, the sort you can easily dismiss, right up until the point where you are soaked. We were wise enough to put on our pack covers and rain gear, and it was a good thing we did - it soon began to pour! It wasn't cold, so we continued on. 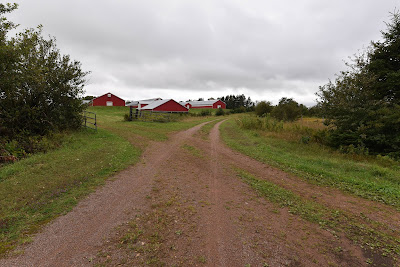 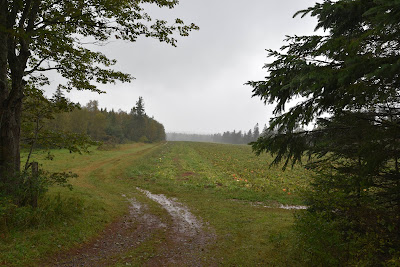 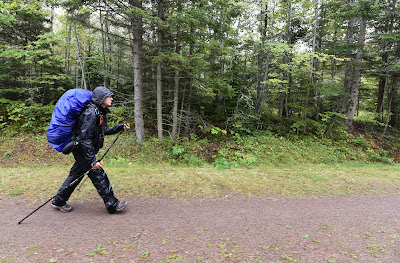 We were clipping along in the deluge, when suddenly we saw a figure approaching on the trail ahead. We didn't think anyone else would be out hiking in the wet, and were delighted to meet a lovely lady who asked if we were the two who were walking across Canada. It turned out she was following our hike, and she herself was walking the PEI portion of the Great Trail. It was lovely to meet her, and it really made our morning. 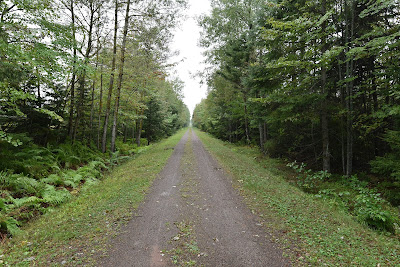 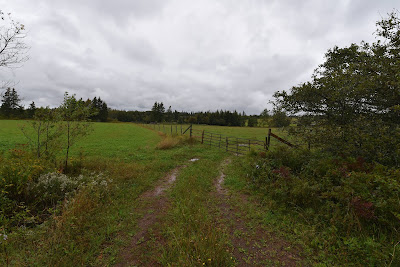 We stopped for a bit in a lovely gazebo on the trailside near York, hoping the rain might let up a little. It seemed about to stop, then redoubled its efforts. We waited until we started to get chilly, then decided to get on with it. A few minutes later the rain stopped, leaving behind some very dynamic skies. 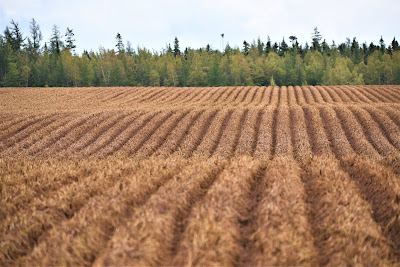 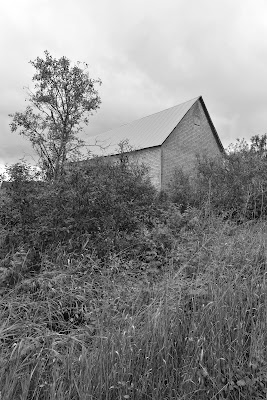 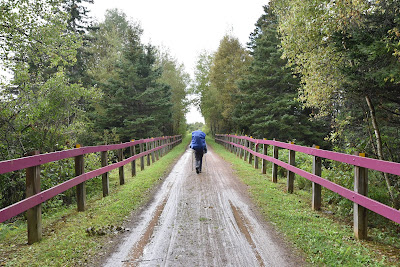 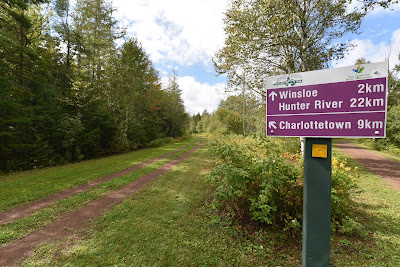 As we approached Charlottetown we passed through the usual progression of industrial park, to busier roads, to box stores and shopping centers. However, unlike the approach to many cities, the trail remained a lovely treed corridor, complete with benches, and interpretive signs right into the campus of the University of PEI. 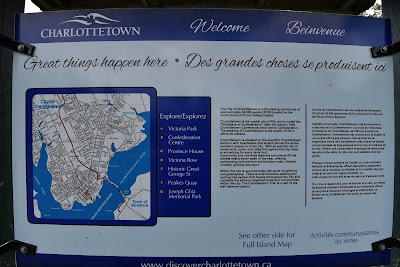 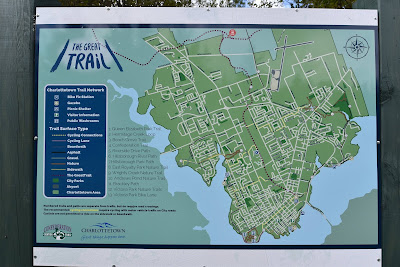 One of the interpretive signs right on the edge of town was placed beside a cemetery. Apparently there used to be a railway station on the spot, which was officially called Sherwood Station, and which was about 4 km from town. In spring and fall the clay roads were difficult for funeral processions to navigate, so the train would drop the deceased off at the station, and then return to take the mourners back to town after the ceremony. The station became known as Cemetery Station. 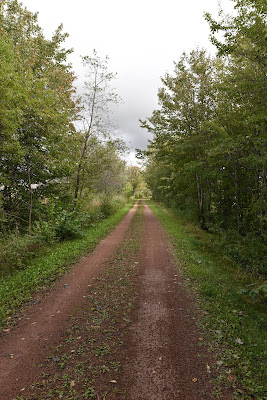 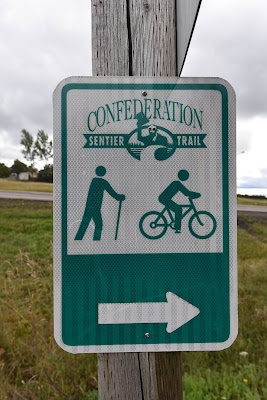 When we got in to town we made a brief stop at the Sporting Intentions shop to buy a new pair of rain pants for me, since it was abundantly obvious the last few times it rained that mine are no longer waterproof. 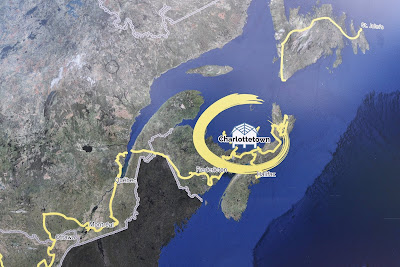 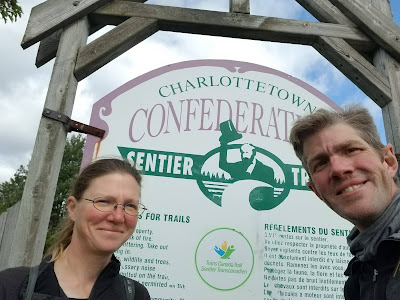 After that Bryson, who is very generously hosting us for the next couple nights, picked us up. We spent a few hours doing some much needed cleaning up and drying out, which was greatly appreciated. 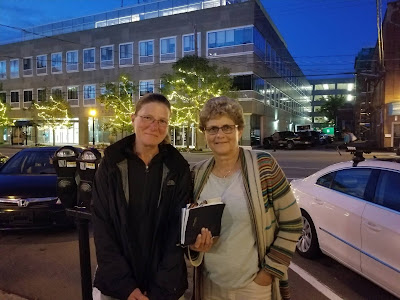 In the evening we were taken to dinner by Ruth, who helps run the Confederation Trail, and joined by Sue and Bryson, who volunteers for Island Trails. It was a wonderful evening of learning about the trails on PEI and sharing stories with three very accomplished hikers. Once again we were left inspired, humbled, and amazed at how much dedication, work, and effort goes into building, maintaining, and managing trails, a lot of it done by volunteers.

It seems like the trail system in Prince Edward Island, and the tightly knit community of people here, make the process of trying to get things done much more efficient than the system in Nova Scotia. The Confederation Trail is managed by the province, and there is a strong group of volunteers who work with the province to build, maintain, and manage additional trails on the island. The results are evident to the long distance hiker. On Prince Edward Island there is a province wide trail system that maintains the same incredibly high standards from one tip of the island to the other, and on numerous spurs in between. For anyone looking for a Camino-like experience in Canada, or for anyone interested in walking a section of the Great Trail, we would highly recommend walking or cycling the Confederation Trail. It truly is a pleasure to walk.