Today was full of surprises, some good, some more challenging. Some might say the Dobson Trail is marshy, wet, overgrown, or difficult to navigate, but I think everyone would agree it is stunningly beautiful. It is a tribute to the volunteers who built it and have kept it going for 60 years now.

The day dawned chilly and with a heavy grey sky. As we packed up and made breakfast we were very thankful that the rain held off.

Just after we left our campsite the trail climbed steeply, then dipped down to a river, and then climbed even more steeply. 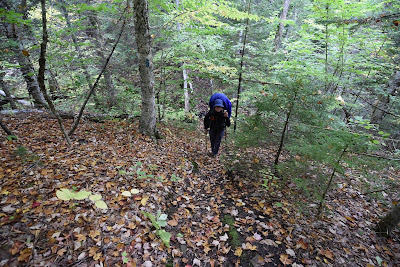 When we got to the top of the ridge, we found ourselves in an area that was actively being logged. As we picked our way through the harvested strips it started to hail! We watched in amazement as the tiny pellets bounced off the ground, and everything else. We quickly changed into rain gear, just before it began to pour. Throughout the day we experienced several scattered showers.

As we continued we made our way along the top of a ridge, complete with a lookout point that offered a panoramic view of a beautiful forested valley. The reds and yellows of the deciduous trees stood out against the dark greens of the conifers, setting the valley aglow. There was a sign indicating that this was a designated 'Amazing Place', and we'd have to agree. 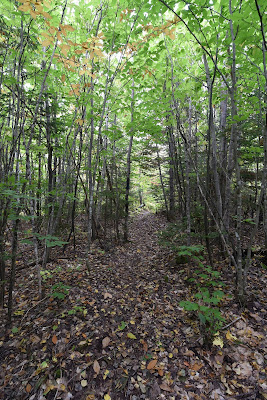 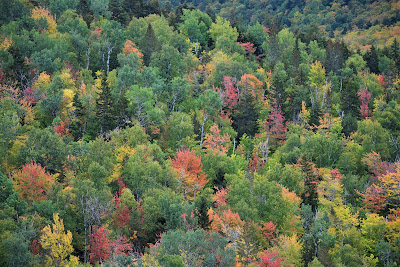 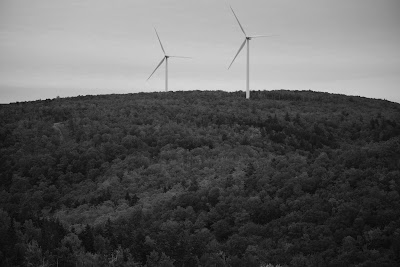 When we reached Possner Rd we had a lovely surprise. Kim had left us a note tied to a tree with additional tips and info about the river crossings in Fundy National Park, as well as the amenities in Alma. She even mentioned where we could do laundry, and that she had left a container of soap that might or might not still be there. This was totally awesome, and really made our morning! 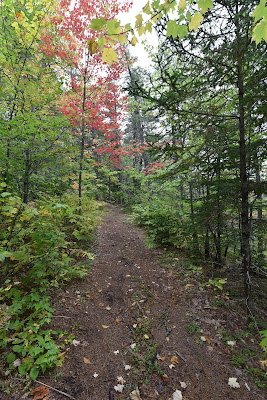 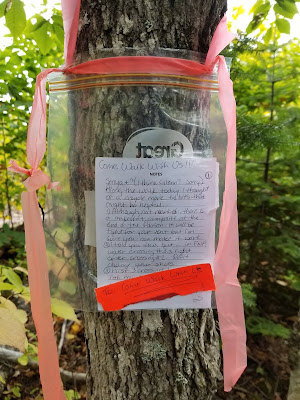 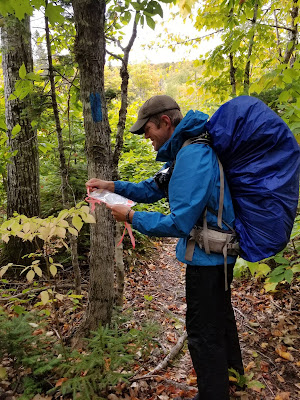 Over the course of the day we had many more road crossings. A lot of these crossings were not mentioned in the guidebook or shown on the map, and at some of these junctions it was difficult to find where the trail picked up again. It was often pretty overgrown, and there weren't blazes on the edges of the roads. In the end however we managed without getting lost. 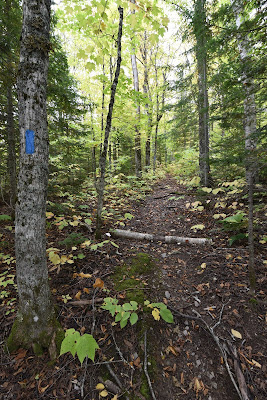 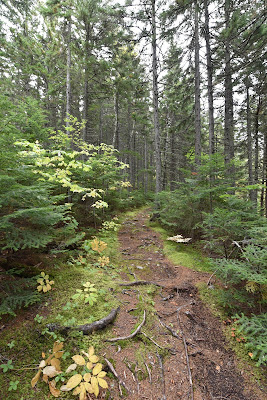 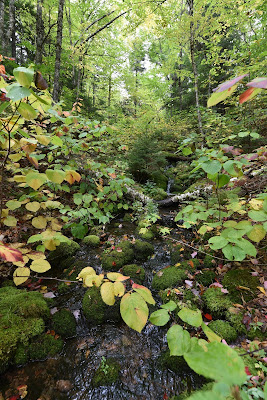 By early afternoon we made it to the Kent Wind Farm, and were walking among large, slowly turning wind turbines. We could hear the rhythmic rushing and whooshing as they turned, and occasionally a buzzing noise as well. 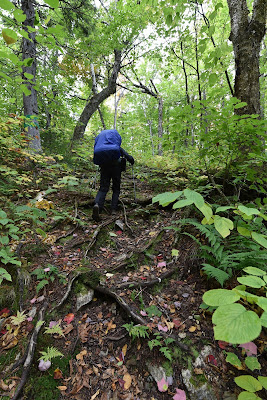 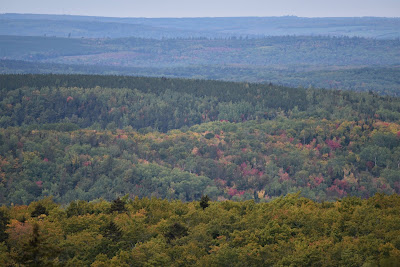 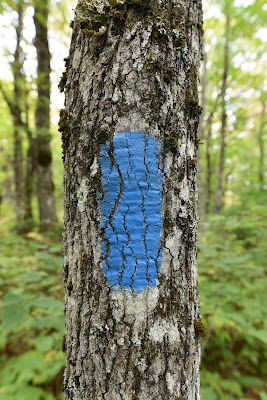 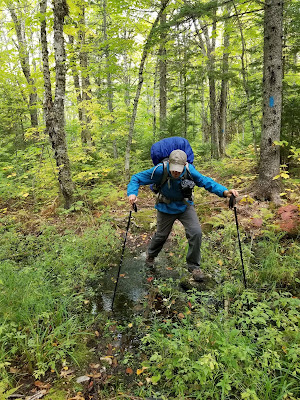 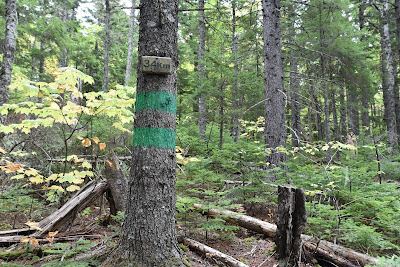 When we were up on the ridge we briefly had cell service and took the opportunity to connect with the rest of the world. There we learned we may be giving a talked in Fundy National Park in a few days as part of their Bike Fest. 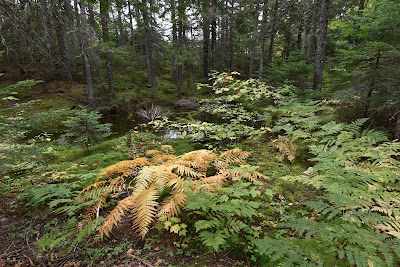 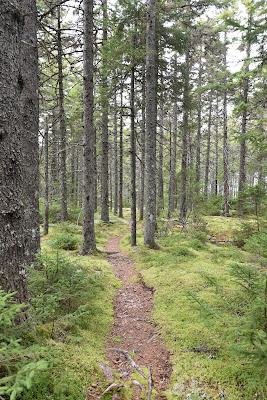 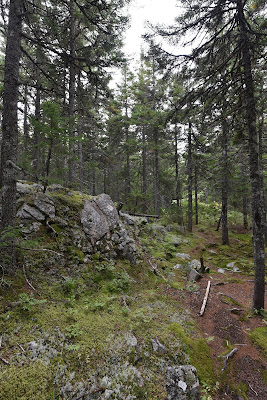 After the wind farm the trail descended into some really beautiful mossy forest, with very tall spruce trees. The deep hammocks of bright green moss, with fluffy looking drifts of lighter lichen on top looked soft and magical. Over the course of the afternoon we also walked through a stand of very old sugar maples, and a patch of breech trees whose foliage was still bright green. 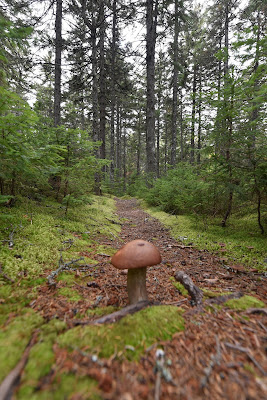 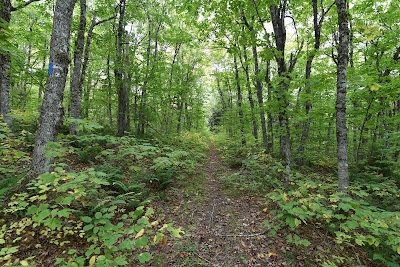 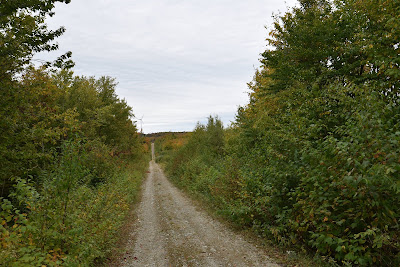 In the last few kilometers of the hike things went a little off the rails. We were following the trail, heading into a section the guide described as very very wet walking. We weren't too enthusiastic about that, because a lot of the trail has been wet and muddy, and we've spent quite a lot of time picking our way through marshes, sometimes to little purpose it seemed. We soldiered on only to find a blowdown involving six or seven huge trees that had fallen helter skelter across the boggy trail. We painstakingly crawled under and around them through ankle deep water. On the other side we found a heavily logged area full of slash and more trees down. We made our way laboriously around those, only to find another huge tangle of trees a few meters along. When we struggled around those we found ourselves waist deep in slash and fallen trees and completely unable to find a single standing blaze. We had read a Facebook post just before we began the trail that claimed a complete cleanup had been done post Dorian, and the trail was ready to go. I think they missed a few! 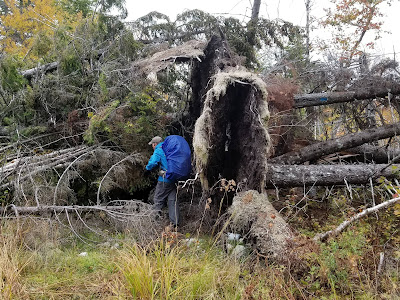 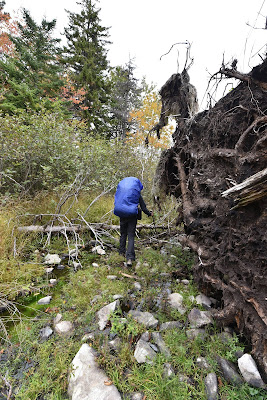 Having little choice at that point we made for the nearest road. It was about ten minutes of bushwacking through slash and raspberry bushes, and we were free. We set off down the road, hoping we were headed in the right direction for Blackwood Lake. Two logging trucks passed us, one going in empty and the other headed out and fully loaded. A kilometer down the road we met up with the trail again, which was a wider dirt track. 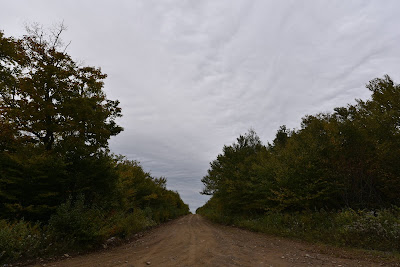 We followed the muddy track for just over a kilometer to the campsite at Blackwood Lake. The guide book had warned that it could be muddy and filled garbage because there was ATV access, and this turned out to be a pretty accurate description. It seemed like a once-beautiful spot on the edge of a lake that had been mistreated. As we set up the tent in the failing light the temperature dropped, the wind picked up, and it began to rain. As the storm strengthened the nearby wind turbines began to sound like jet engines. Iseeing their flashing red lights and radiy spinning blades on the darkness was very unnerving. We are glad to be dry and warm and inside the tent! 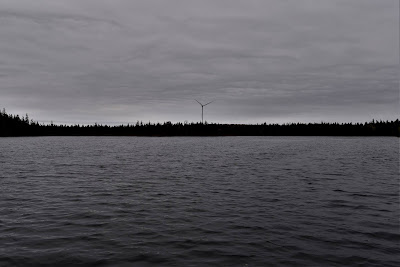