Today we were blessed with another beautiful, sunny, warm fall day - the sort of day that is perfect for hiking with a pack on.

We hung out in Saint John until noon, when we were able to catch a Maritimes Bus to Oromocto. We had debated quite intensely whether we should take the bus around the water section of trail or walk the highway, but as we sped along in the bus, enjoying views of the rolling forested hills of New Brunswick, we realized we made a good decision. The highway was bordered on both sides by a 6 ft tall wildlife fence, and it was posted all the way along as a military training ground with no trespassing allowed. It would have been nearly impossible to camp along the highway or get water, and we would have had to break the law. The bus was a good decision for us.

The bus dropped us off at Tim Hortons on the highway. As we made our way to the beginning of the terrestrial section of the Great Trail we came across the Oromocto Gateway Wetland. 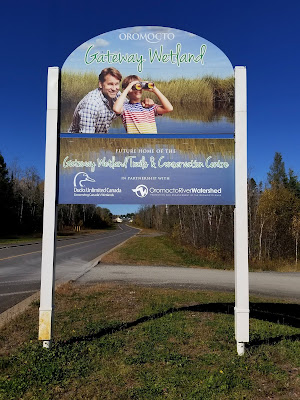 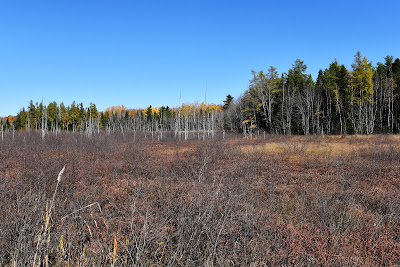 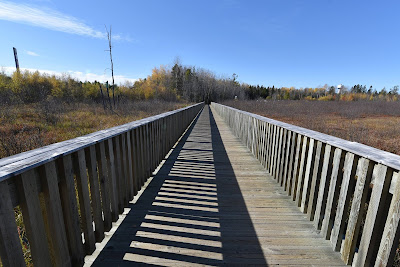 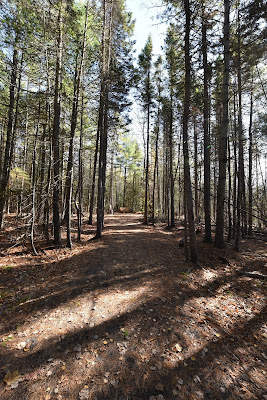 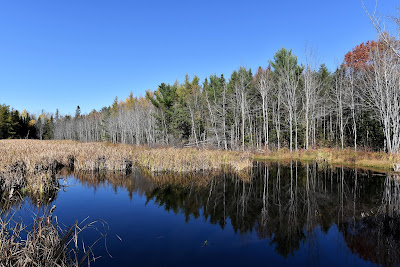 This protected area included a boardwalk and a loop trail that featured wood carvings of animals, interpretive signs, and some fine rock art. We spotted a small flock of Mallards on the marsh, and we suspect this would be a fantastic spot to do some birding in the spring and summer!

When we joined up with the Great Trail we learned we were in for a treat. The trail between Oromocto and Fredricton followed the old railbed, and it was a glorious, forested track with a wide, flat, crushed stone dust bed. 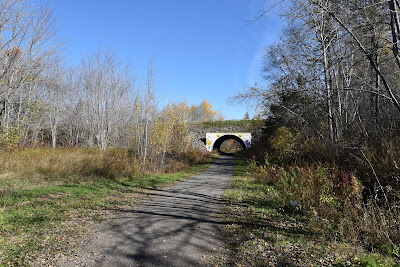 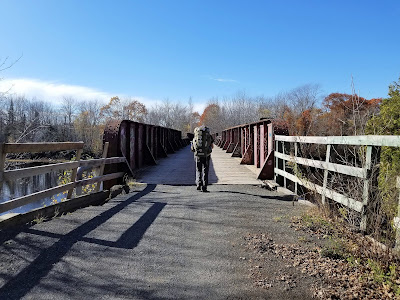 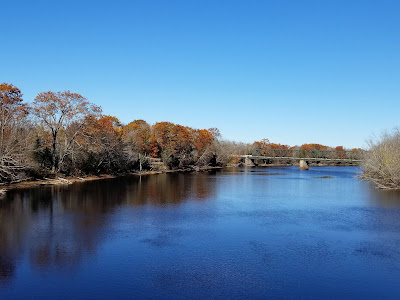 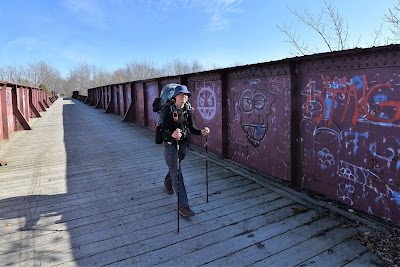 As we crossed a trestle bridge over an offshoot of the St. John River we were stopped by a friendly couple who asked what we were doing. They mentioned they had spoken to someone who was biking the trail in the other direction a few days ago. There were lots of people out biking, walking their dogs, ATVing, and enjoying the beautiful fall weather. 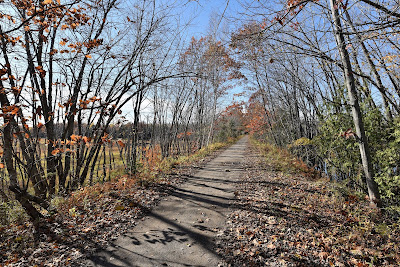 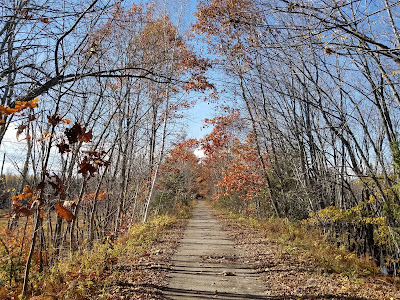 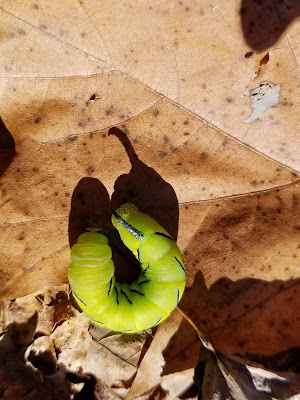 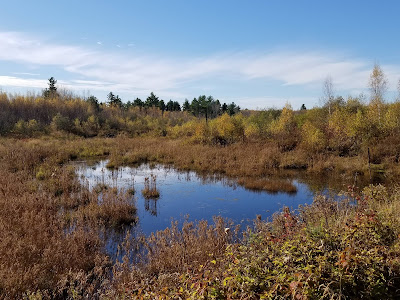 After crossing the river, the trail, which was a lovely forested corridor, took us around the airport. We've walked around airports before, and the experience usually isn't too pleasant. In this case it was different. We watched as a small Katana aircraft practised taking off and landing, and we skirted around the runway on a nice sandy trail planted with red pines. 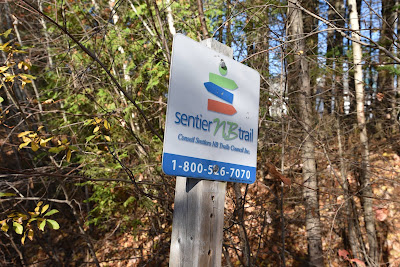 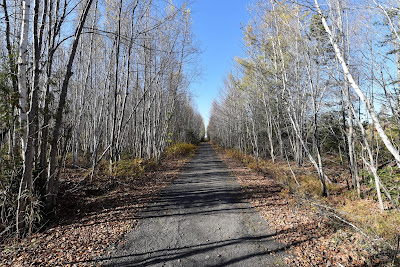 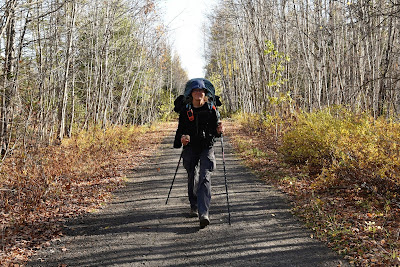 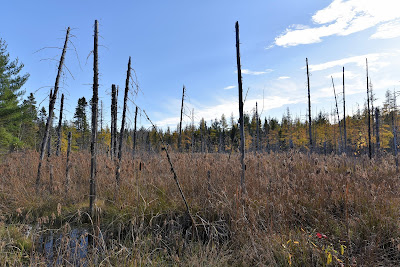 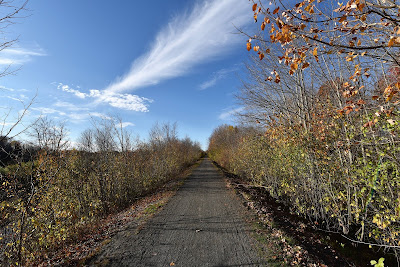 After the airport we continued on, past marshes, fields, and forested areas. One of the highlights was coming across a small group of Canada Jays at the side of the trail. We also spotted an American Robin - our first in quite a while. In one of the marshes we passed a group of Blue-winged Teals, and all day we saw Blue Jays and American Crows flying by overhead. It was a joy to be back on a trail in a more natural setting again. 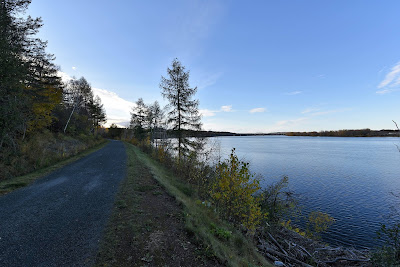 About 11 km into our hike the trail began following the St. John River again. The density of houses began increasing as we approached the city, and as the sun set it turned the river to gold. It was one of the most beautiful approaches to a city we've experienced yet. 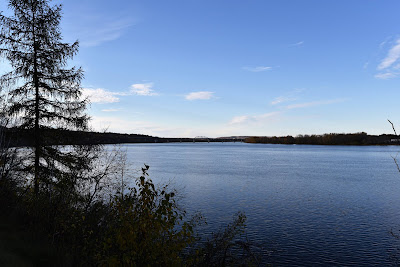 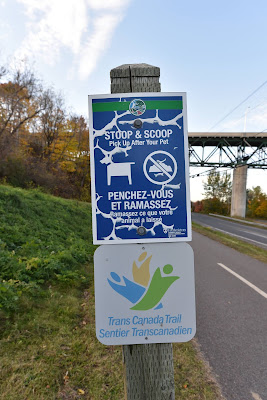 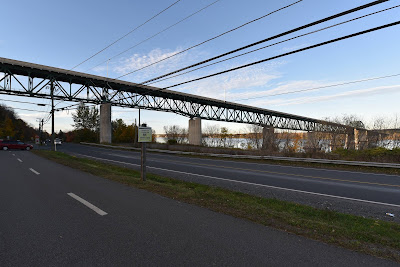 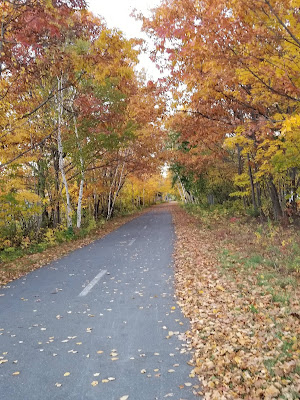 We walked between the river and a row of unique, landscaped, and luxurious looking houses for quite some time. We passed the Princess Margaret Bridge, and then seemed to enter the city proper. We walked past the University of New Brunswick, and then entered the old quarter - passing several churches and historic buildings along the way. 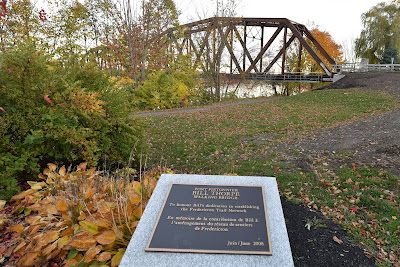 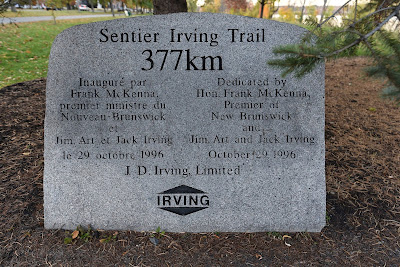 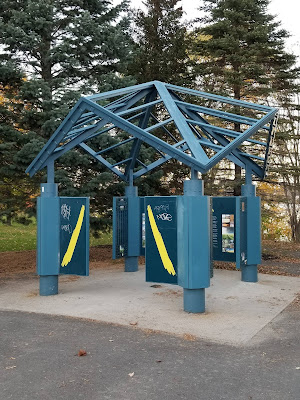 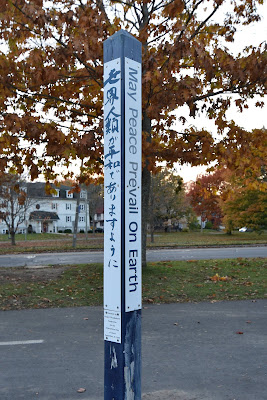 Our first impression of Fredericton made us want to explore it more. Unfortunately it seems to have a graffiti problem, with a lot of gang signs and crude language decorating many of the interpretive signs, bridges, and pavilions. It seems there might be an opportunity to commission some street artists to help with this. 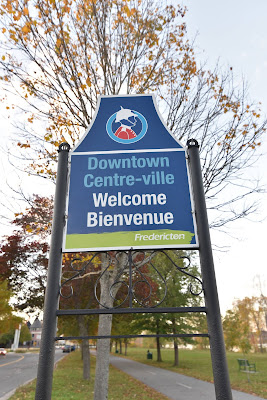 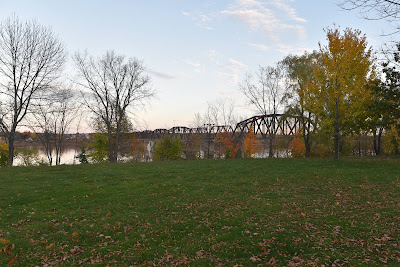 As we entered the town we met a young man who asked where we were from. When we mentioned Simcoe, he said he had been there! What are the odds? It turns out he visited for the Mumford and Sons Gentlemen of the Road tour. Small world.

Tomorrow we will push on, hopefully completing another 30 km of trail while the weather is good. We will be back to give a talk at the University of New Brunswick in a few days though, and will take the opportunity to explore it more then.