Since we arrived in Hampton in the dark last night we got our first glimpse of it in the golden light of early morning. There was a delicate layer of frost on everything, and the early morning light was setting the fall foliage aglow against a clear blue sky. It was stunningly beautiful.

The town of Hampton is located on the Kennecasis River, amid rolling hills. It has a beautiful town square, bordered on two sides by historic buildings, and centered around the old train station. It seems like a prosperous and lively community, with active arts, food, and sports cultures. 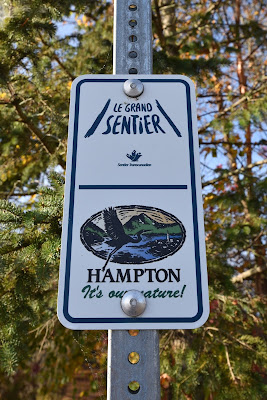 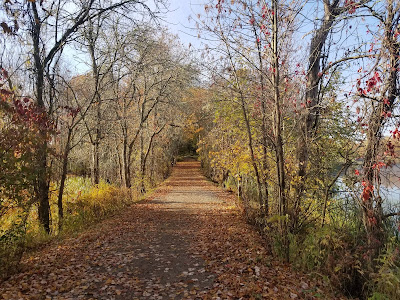 We made our way through town and along a beautiful, colourful, forested trail that ran beside the river. The fall colours reflected in the dark water of the river looked like a painting. There was a large flock of Mallards paddling around in the wetlands at the edge of the river. The amiable, sociable, busy chatter of ducks always makes me happy. 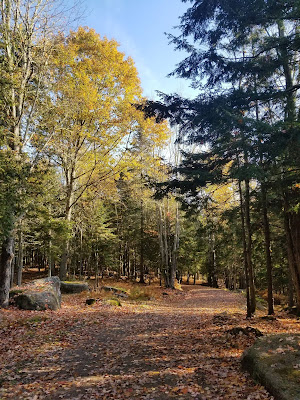 For a few kilometers we enjoyed a lovely forested, municipal trail that wound along the river. It was wide, crushed stone dust, interspersed with boardwalks. There were lots of people out walking their dogs and small children as they enjoyed the beautiful fall morning. 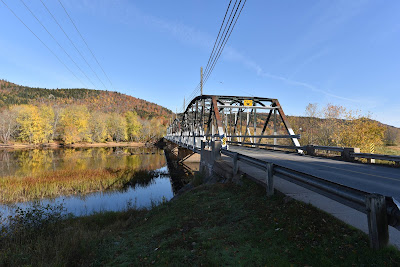 As we crossed out of Hampton we passed another Stonehammer Geopark site at the base of a lovely iron sided trestle bridge over the river.

From there we passed a lovely looking country market, advertising specials on fresh apples, and then found ourselves on a winding road that offered panoramic views of the river, marshes, and rolling agricultural fields.

It was a prosperous area with custom built ranches and houses overlooking the waterway and marsh. As we walked past one such house, a man waved and called to us. Donny shared his story of growing up in the area, farming, and then retiring to the house he built on the hill. In the past he had hosted a girl solo biking across the country. Before we left he gave us each a delicious apple he had picked in a nearby orchard. Fantastic trail magic! 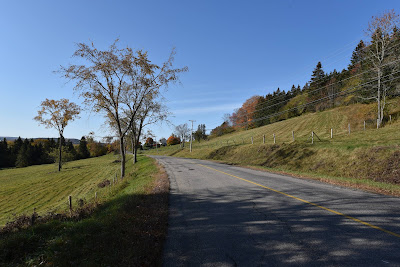 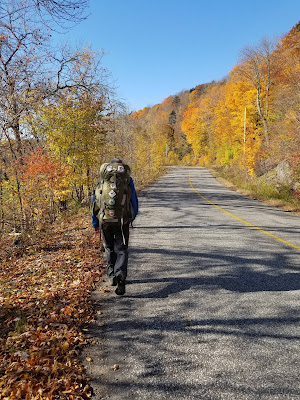 For the next few hours we walked this road. At first it was paved and lined with houses, and offered expansive views of the river. 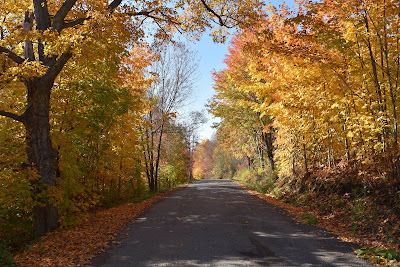 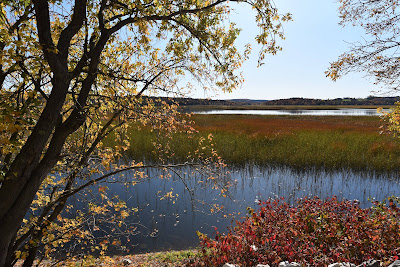 Eventually we turned onto a smaller road that eventually turned to gravel and then dirt. This road wound between the river and steep, colourful, rolling hills. It was a pleasure to listen to the rustle and crunch as we dragged our feet through the fallen leaves like children. The fresh earthy smell of fall foliage is always one of my favourite parts of autumn.

The road became narrower, the houses turned to cottages, and the cars were joined by ATVs. This peaceful backroad was a very nice change from all the busy road walking we've been doing lately. 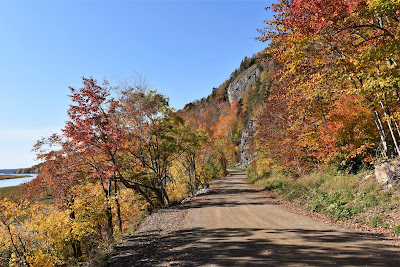 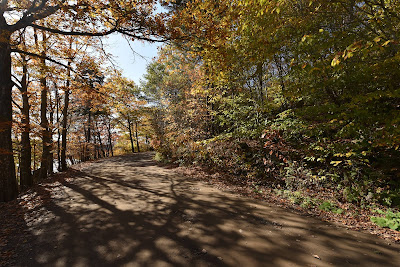 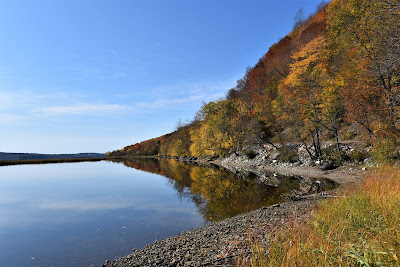 As we headed towards Kingston we began climbing. This seemed like hard work by this point, but it was a beautiful, warm, sunny day and we couldn't have asked for a more beautiful time of year ro be in the rolling hills of New Brunswick.


Eventually we made our way back down to the water, and arrived at Reeds Point, where we caught the Gondola Point Ferry over to the community of Quispamsis. There are two small open-deck cable ferries that make this crossing during the day, and one that runs at night. There was space for maybe 16-20 cars on the open deck of each ferry, and when we made the crossing both ferries were full! 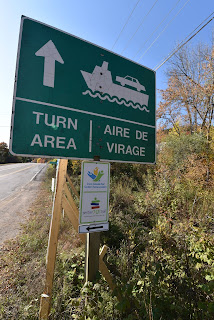 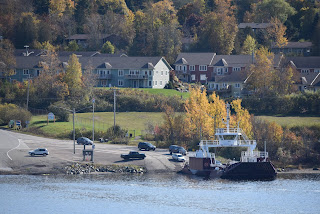 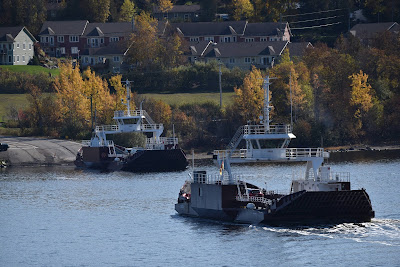 When we arrived in Quispamsis it was immediately obvious that we were in the suburbs of St. John. The rolling hills were fully developed with subdivisions and newer looking condos. 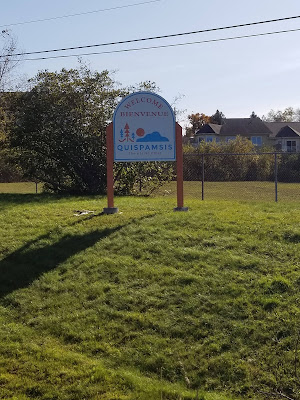 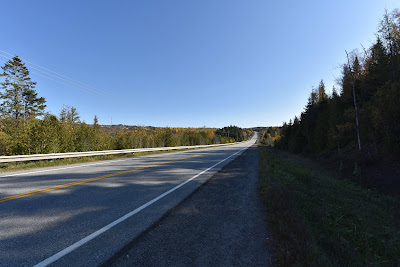 Fortunately for us, the Great Trail followed a series of municipal pathways that wove through the housing developments. The trail was a wide, flat, multi-use trail of crushed stone dust, and it was extremely well signed and easy to follow. There were lots of people out enjoying it, and at one point we passed a large playground and bmx bike park full of small children playing noisily and happily. 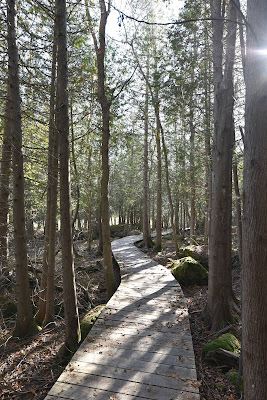 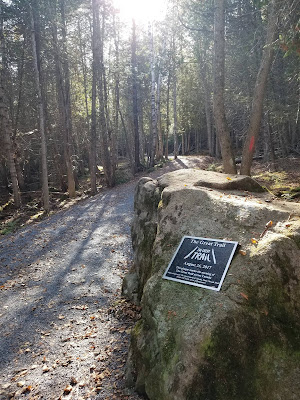 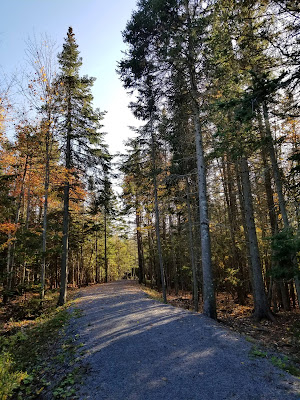 As we were making our way into the town of Rothesay, which is just 16 km outside of downtown St. John, it was rush hour. Suddenly a very elegant lady came rushing up the sidewalk towards us. It turned out to be Georgie, who had very kindly and generously offered to host us in Hampton - which we sadly had to turn down as we had passed through the town far earlier than expected. She made a generous contribution to our resupply fund, and wished us a cheerful "Buen Camino!" It turns out she was a fellow pilgrim. Her energy and kindess really made our day! 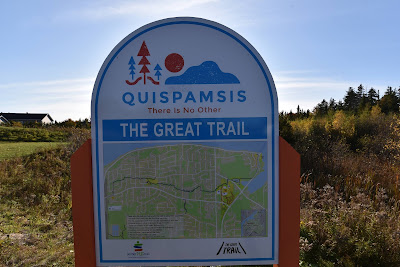 Over the past two days we've now walked just over 75 km, which is more than we're used to. We are supposed to have 70 kph winds and anywhere from 25 - 70 mm of rain tomorrow, so we're going to take a rest day in Rothesay before continuing on.  This will also give our bruised and foot sore bodies a chance to rest.  Look out Quebec, here we come - at 5 kph!