We knew there was a considerable amount of rain expected for today, something New Brunswick badly needs. They predicted it would begin at noon. They were wrong.  Not about the rain, but about the timing. 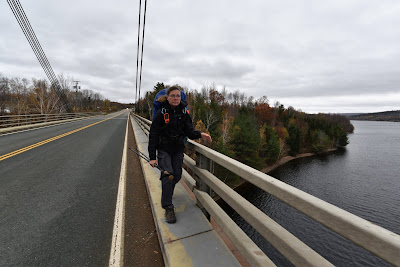 The day began well enough. We set out into a blustery morning, watching as the dark gray clouds scudded across the water. Leaves were blowing sideways across the pavement as we drunk-walked along, blown slightly off coarse by the gusts. Just as we passed the bridge into Nackawic a Bald Eagle came soaring past, then suddenly dove, feet and talons extended to catch a fish in the St. John River. 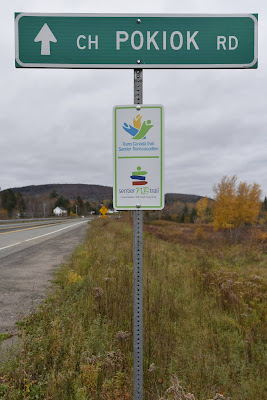 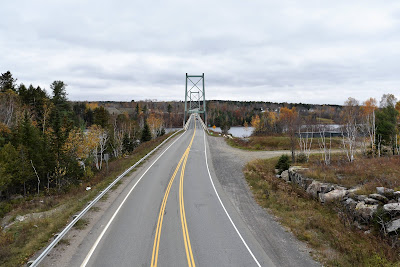 The first five or so kilometers we walked down a two-lane paved road that continued to run along the river. Unlike yesterday, there was no traffic on it, which was kind of nice, but also a bit unnerving. The road was cracked and in need of repair, and it felt distinctly unused. As we walked it started to rain. At first it was just a few drops, then a few more, and suddenly it was raining hard. 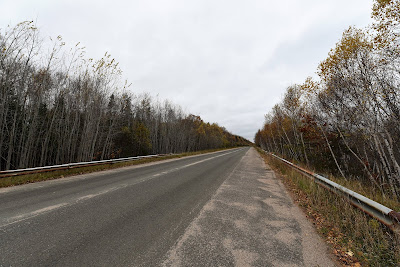 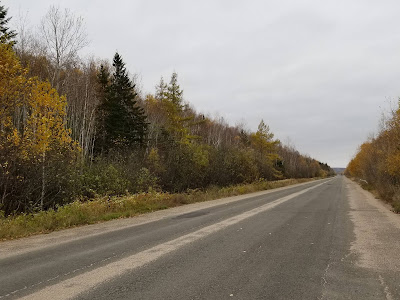 We continued down the road for a bit, enjoying the bright yellows and deep reds of the leaves as the rain brought them alive. Then quite suddenly the road seemed to come to a dead end. This seemed a little puzzling, until we realized that there was a smaller paved lane running off the side. 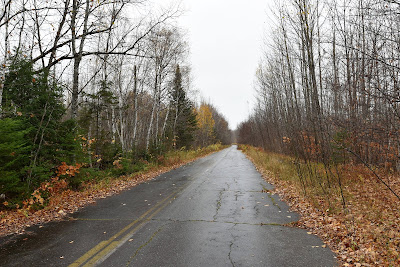 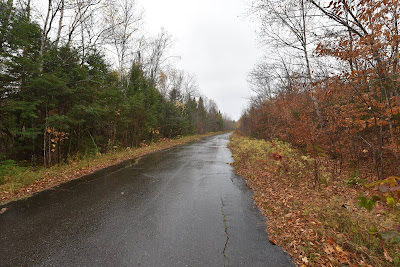 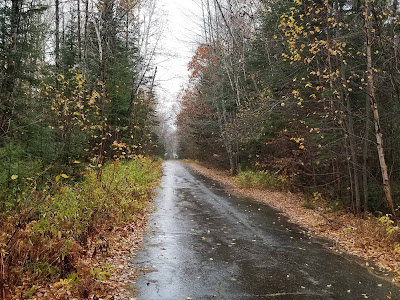 Lower Shogomoc Rd was a narrow lane, bordered on both sides by brightly coloured trees. To our great concern there was a 'No exit' sign posted at the beginning, so heading down it required an act of faith. It was a lovely walk though. Though at one point, two Ruffed Grouse erupted out of the leaves on the side of the trail as we passed, scaring both of us with their abruptness. A group of Black-capped Chickadees chattered in the shrubs, making themselves heard above the steady patter of the rain. 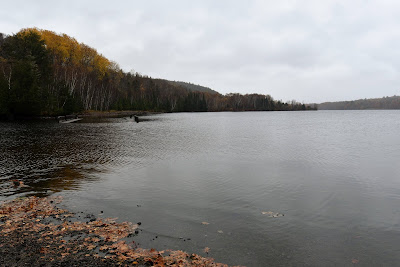 When we reached the river, our hearts sank. Coming around the corner we could see the trail continue straight ahead - under about 2 ft of water. Clearly the old road bed had sunk! Thinking we'd either have to backtrack or wade, we walked - crest fallen - the last few meters to the shore, which offered a beautiful view over the river. 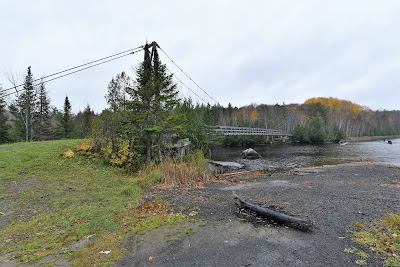 Surprise! As we reached the water we saw there was a huge pedestrian bridge spanning the river. Yay!! It was an elegant suspension bridge that swayed as we walked across it, adding to the excitement. 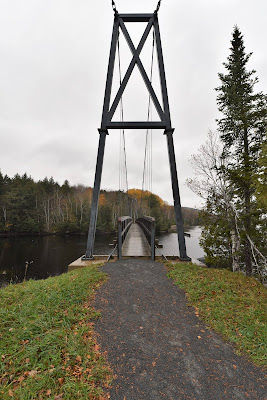 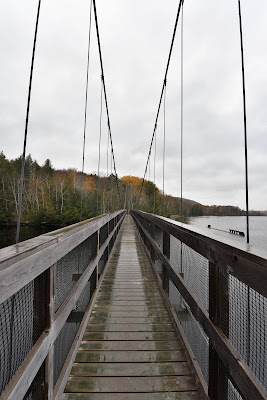 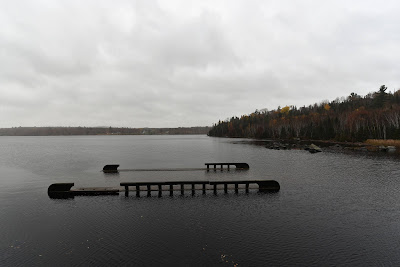 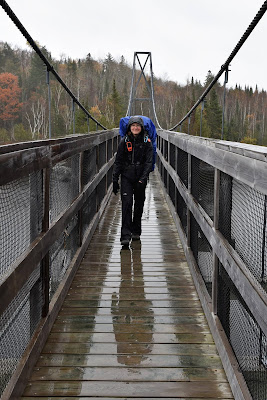 At that moment we fully appreciated all the work the trail builders, volunteers, planners, and fund raisers have done to create and connect the Great Trail. 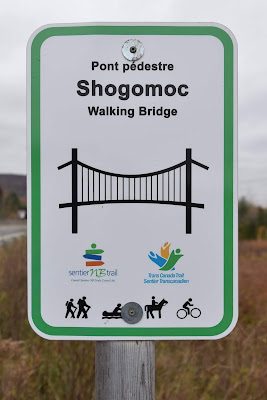 There was a picnic table on the far side of the bridge, followed by a short section of lovely, stone dust trail through beautiful forest. Just off shore there was a flock of Hooded Mergansers! 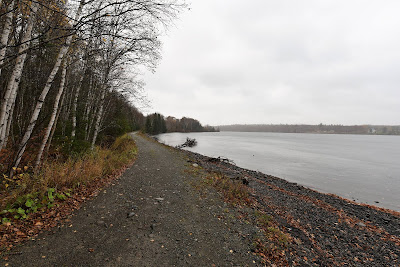 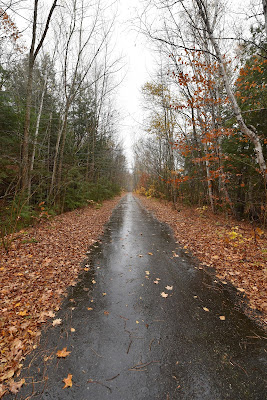 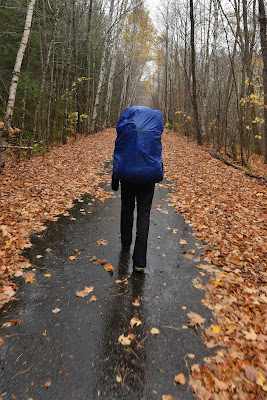 When the trail ended we emerged onto Temple Rd, which was a well used two lane road with houses and a church on it. Feeling more confident, we kept up a steady pace, now thoroughly soaked by the heavy rain. 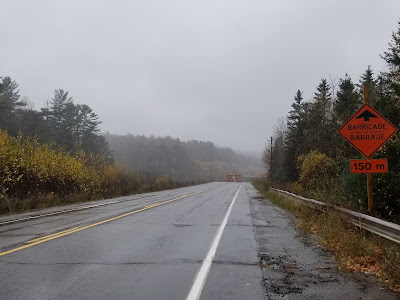 Not too much farther along we saw a sign saying there was construction ahead. Unconcerned, we continued on. Then we saw a sign saying the road was closed to thru traffic. Slightly more worried, we decided to continue on and see if we could walk around the construction. It was raining hard when we started to see flashing lights up ahead. We persevered, and with a sinking feeling saw the 'road barricade in 300 m sign.' That sounded very final. 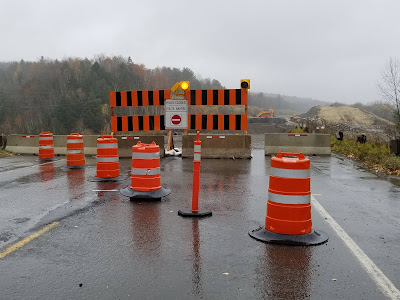 When we got to the blockade we found a bridge out. There was a steep, deep, valley with water at the bottom, and a construction crew on the other side. We considered our options, but there was clearly no way to safely get down the embankment, let alone up the other side, and we couldn't see a way to walk around it either.  At this point a construction worker drove up and flatly - though kindly and with a great deal of sympathy - told us that we could not walk through the site and that it was likely between 20 and 25 km via roadway to go around it.  For a car this would be a 10 minute inconvenience, for us it would mean an extra day of hiking to move forward 100 metres.

We were supposed to meet Eric in Meductic, which was another 5 km down the trail, at 1 pm. When we looked at the reroute we'd have to take around the construction, we discovered it was about 23 km long, or it would require us walking along highway 2. It was thundering and lightening at this point, and raining hard enough to turn the world white. 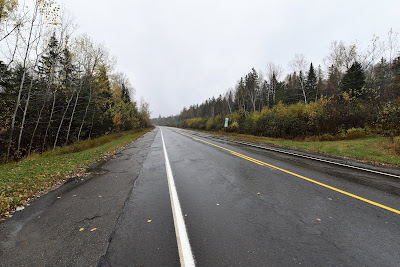 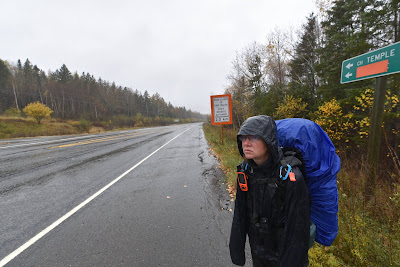 Dismayed by our options, we called and very luckily for us Eric kindly agreed to pick us up early, from the side of the bridge we were on. He arrived with the heat in the car turned up high.  He must have been roasting, but we greatly his thoughtfulness! He also kindly brought a pile of dry clothes for us to change into, and he treated us to lunch on the way back. We couldn't have wished for anything more.

We spent the afternoon drying everything out and meeting a house full of lovely rescue animals. It was an evening of wonderful food and great conversation with Eric and Gabriela. Once again we were left feeling extremely blessed by our good fortune and the wonderful people we've met along the way.  They were so kind, generous, and thoughtful, we were positively spoiled!