Our campsite on the edge of the beautiful St. John River was very noisy last night. This was partially due to the road and air traffic overhead, but it was mostly due to a large group of Canada Geese and Mallards that landed on the river just after it got dark. They spent much of the night honking and chattering softly to each other, but about once an hour they erupted into loud squabbling, complaining, honking fits. At one point it sounded like a large animal stomped down to the shore, drank noisily, and then took a loud splashy bath. Try as I might, I couldn't see what it was. I love nature, but I think it never sleeps, and sometimes it conspires to keep everyone else awake too. 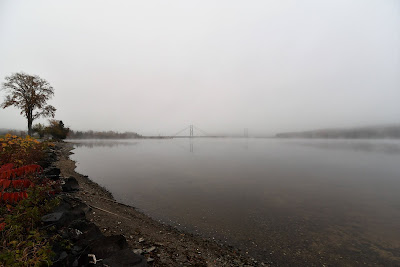 When we climbed out of the tent this morning it was to find the world blanketed in a thick layer of fog. The bridge was just visible, but still reflected in the water of the river. The fall colours on the hill opposite could just be made out in the early morning light. As I made our coffee and oatmeal, struggling to get the damp twigs to ignite, the Canada Geese took off in small groups, beating their wings and making trails on the surface of the river before disappearing into the fog. All that was left behind was their friendly honking, receding into the distance. 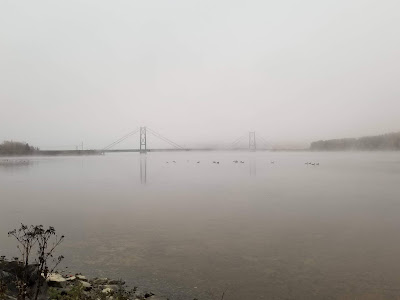 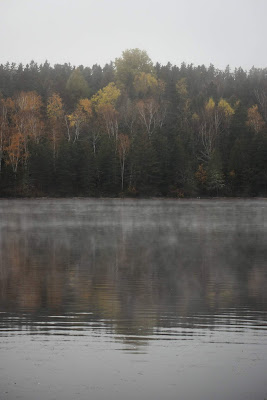 Last night was only 3°C, so it was a chilly start to the day. Even with partially frozen fingers and a very wet tent we managed to get everything packed up and to get under way by about 9 am.  The highlight of morning then came when a family of loons began calling - which to us has always been the sound of the wild and summer nights on the lake. 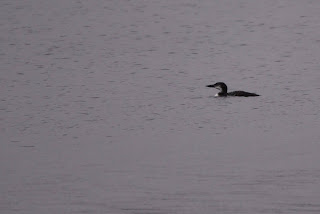 Today was a 36 km walk along the side of highway 102 North. Although we don't enjoy road walking too much, we did appreciate the wide, paved, level shoulder and the relative lack of traffic. You know your life has taken a turn for the strange when you become a connoisseur of road shoulders. 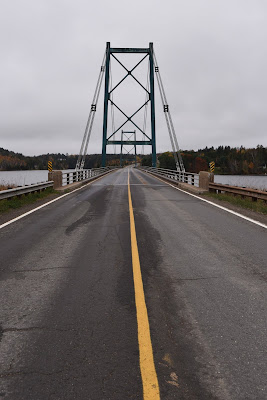 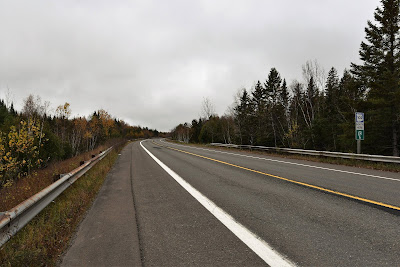 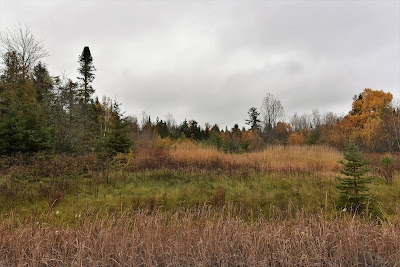 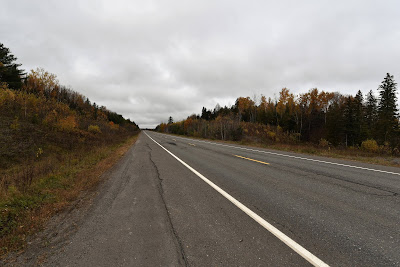 Our first and only stop came 8 km into our hike, when we made a small detour for a second breakfast. We stopped at the Acorn Restaurant, which was in a truck stop.  To our delight, we found that it was in fact a very nice restaurant, with amazingly friendly staff. We thoroughly enjoyed our veggie omelettes with home fries, warm buttered toast, and coffee. (Yes food has become central to our world, the focus of many of our discussions, and lately the centre of most of my dreams) There were also washrooms complete with showers, although we didn't partake.  If only such facilities existed across Canada...oh to dream a dream. 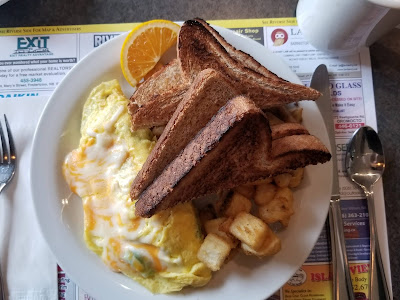 After leaving the restaurant, feeling much fuller and happier, we followed the trail past the entrance to Kings Landing. 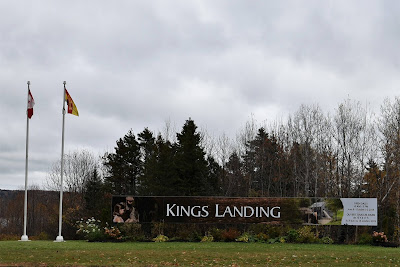 Unfortunately it was closed for the season, which is a problem we've started to encounter more and more, and is a definite downside to being behind schedule. Kings Landing is a living history museum with buildings constructed between 1820-1920. It is a village which is a representation of what life was like in New Brunswick during the 19th and 20th centuries.  This area was settled by Anglo-American  Loyalists  from the thirteen colonies, who were called the United Empire Loyalists. When it is open, it is possible to learn about the history of this area in Kings Landing. 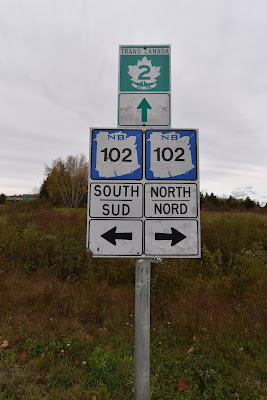 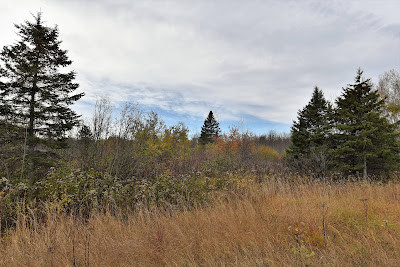 After passing by the historic site we walked down the shoulder of the road, which followed the St. John River. It was a mostly forested landscape, with houses and the occasional business interspersed along the way. Across the river we could see houses, agricultural fields, church steeples, and rolling forested hills beyond. It was a beautiful and idyllic setting, but it never changed, giving us the feeling we were walking endlessly without making any progress. 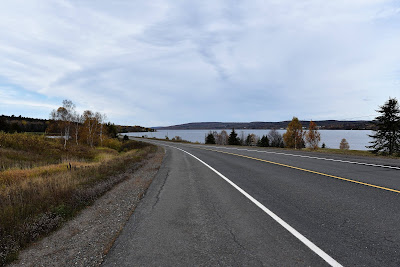 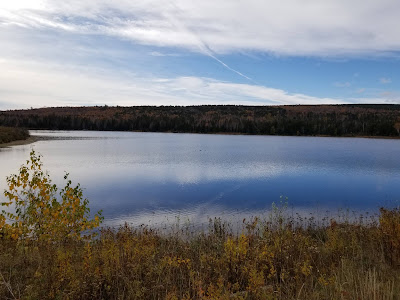 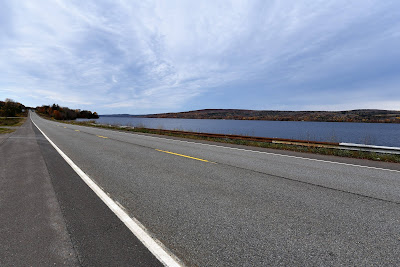 One thing we noticed today was a distinct sense of suspicion by local residents. One lady was leaving her driveway, saw us coming, and sat for about fifteen minutes at the end of the drive. She then made a u-turn to park in her neighbour's drive a little farther along. She waited for us to pass, made sure we kept going, and then drove by shaking her fist at us. Shortly afterwards a farmer from followed us for several minutes on his tractor - at one point yelling 'your type aren't wanted here.' 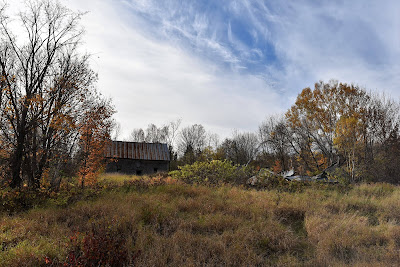 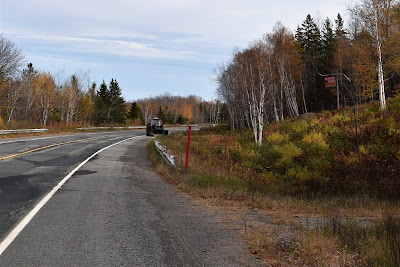 Every time we went to stop for a few minutes we had people stop - idling in their cars - and stare until we started moving again. We were passed by four different RCMP vehicles over the course of the day. It made us wonder what goes on in this area to put the residents so much on edge. 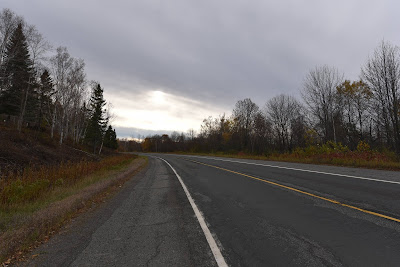 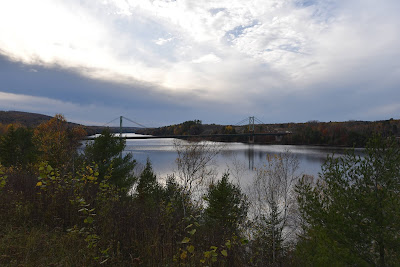 As we walked today we saw many v's of Canada Geese flying overhead. Several groups of Common Mergansers swam on the river, pairs of Mallards took to the air from roadside ponds as we passed, and a large, noisy flock of European Starlings perched atop a highway sign. As the temperatures dip and we see waterfowl heading south it is hard not to feel like winter is coming and we should follow them.  Given all of these signs, our pace has been quickening, with our goal now to get to Quebec and perhaps Quebec City or Montreal. 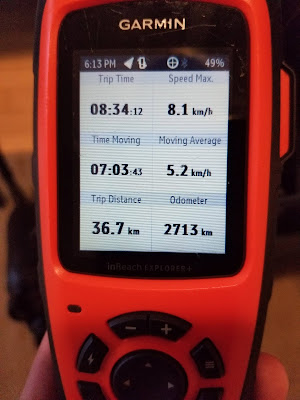 By late afternoon we had walked over 30 km and our feet were starting to hurt from all the pavement walking. With the leaves down it is harder to find spots to camp, especially in these rural areas, where it seems like every woodlot is privately owned and watched over by a house opposite. Finally we stopped near the town of Nackawic, which is apparently home to the world's largest axe. This roadside attraction was built in commemoration of Nackawic's designation as the forestry capital of Canada. It no longer holds that title, but there is a time capsule in the blade of the axe explaining why the town once held that distinction. 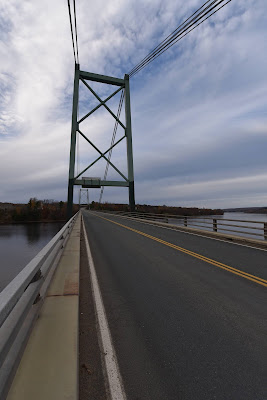 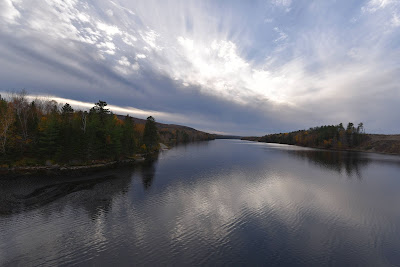 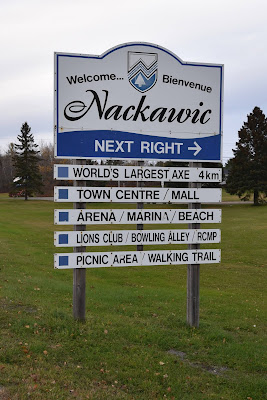 Initially we set up camp along the roadside, however the night's early rainfall soon lead us to have a very wet tent.  Unfortunately in our exhaustion we set up our tent in a lowland area and soon had a very wet - ok, flooded camp site.  The realities of the night and our condition soon set in and we both felt that we had no choice but to repack our gear (now very wet), and trek into Nackawic to find a B&B to get warm, dry out, and get a good night's rest.  Ultimately we ended up at the amazing Big Axe Brewery B&B - the host of which was amazing!  We were soon inside, showered, dry, comfortable, and having our gear laundered!  As a result an evening which was rough to begin with soon turned into pure heaven. 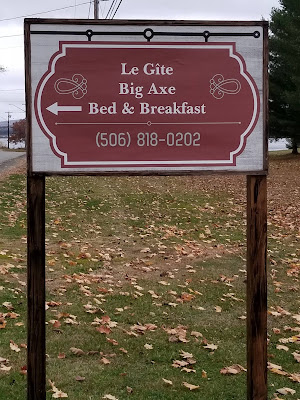 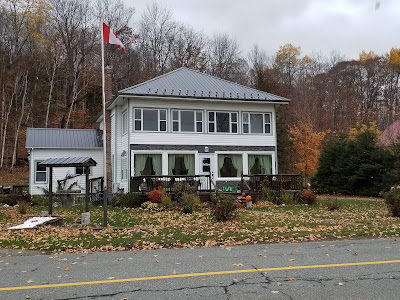 It has been a very long day, and tomorrow is supposed to bring over 25 mm of rain. We have had a very long run of beautiful, warm, sunny, fall weather and we have no complaints.
Posted by Sonya and Sean at 5:31 PM