We began making our breakfast in the dark, and left the campsite around 8:30 am. The sky was mostly overcast, and there was a persistent wind blowing through the canopy. As we emerged from the trees into the river estuary we were met with a truly gorgeous sight. The river was located in a deep gorge, the sides of which were covered in dark green and yellow foliage. 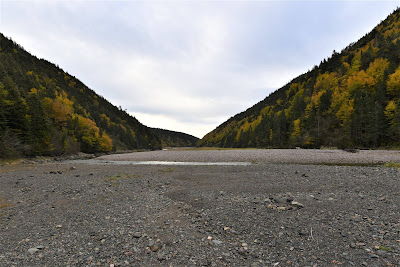 The wide riverbed was littered with coloured rocks and pebbles, strewn with the occasional piece of blond driftwood, and bordered with rich golden marsh grasses. As we watched a majestic Peregrine Falcon with soft brown wings soared down the canyon and alighted on a conifer, its stripy breast turned towards the warmth of a sun that promised to show itself shortly. 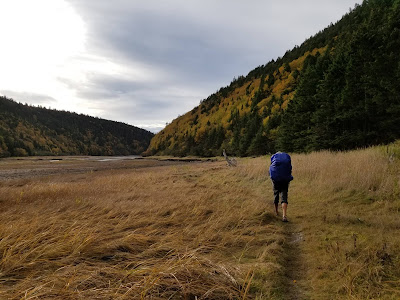 Unfortunately we had misunderstood the description in the guidebook, and thought we would be able to cross the Little Salmon River without getting wet. Sadly, this was not the case, so we had an abrupt wake-up as we waded through the icy shallows, our feet stinging within seconds. It was neither deep nor far, so we were soon dry and on our way again. 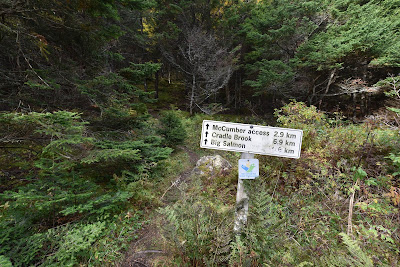 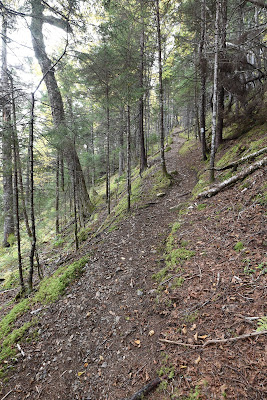 Although the steep ridges on either side of the river made a gradual ascent seem improbable, we were delighted to find a relatively gentle climb up out of Little Salmon River.


There seems to be a break in the trail at Little Salmon River. East of there the kilometers are marked, apparently as surface distance (not flat line), and they count up as you progress west. Until kilometer 17 they are indicated by markers along the trail. After Little Salmon River the kilometers apparently reset to zero, still counting up as you move west, but using flat line distance. However, they are not indicated anywhere on the trail.  The guidebook doesn't really provide much of a description of this part of the trail, so this seemingly unnecessary renumbering may be more theoretical than anything else. In any case, the trail did have a different feel after Little Salmon River. 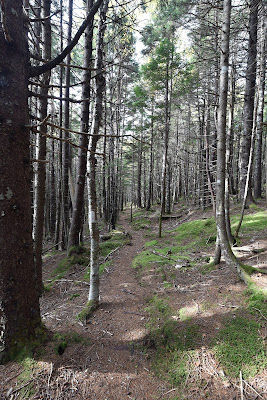 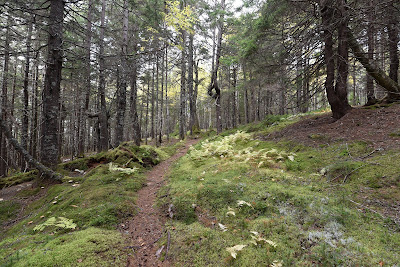 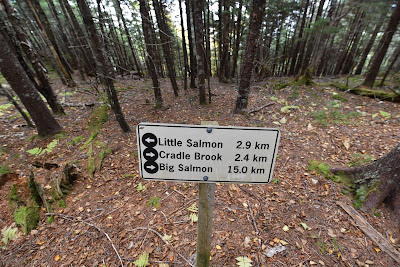 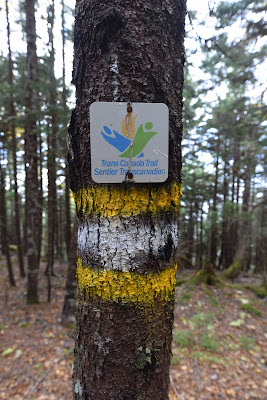 As we climbed, we enjoyed a relatively wide footpath that was mostly free of roots, rocks, and sags. It was really enjoyable. When we reached the top we found ourselves wending through a mossy forest. The trail was still about a foot wide, easy to follow, and easy to navigate. It was a pleasure to walk, and we felt like we finally had the energy to enjoy the mounds of deep, emerald green moss, the colourful mushrooms and ferns, and the little fir seedlings forming what looked like a whole miniature world at ankle height. 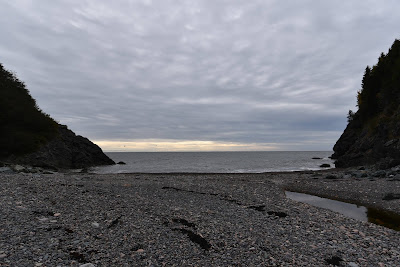 The descent into Cradle Brook was also relatively sedate, involving no narrow switchbacks or precarious sagging sections. Just before we emerged onto the beach we found a beautiful little campsite, tucked into the trees beside a busily flowing brook. At that point we had high hopes that this section of the trail would be less extreme.

The beach at Cradle Brook was relatively small, wedged between two towering and impressive cliffs. The wind was quite strong as we crossed it, causing the slate grey waves to crash into the shore, erupting in towering plumes of white spray. It felt wild, rugged, and beautiful. 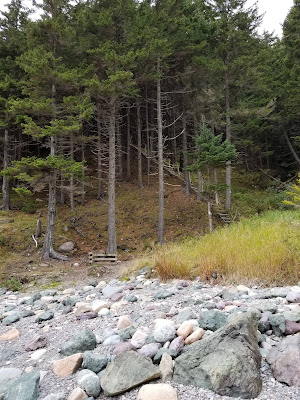 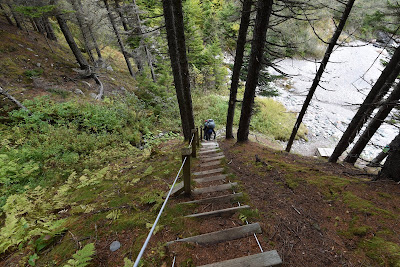 On the eastern edge of Cradle Brook we began the ascent with a 100 step (30 m) cable assisted ladder. This wasn't as scary as it looked, but a few of the posts holding the cable in pace were rotten, giving it some extra swing, which was interesting. 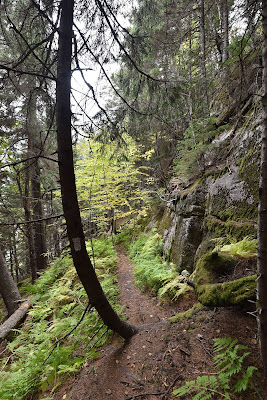 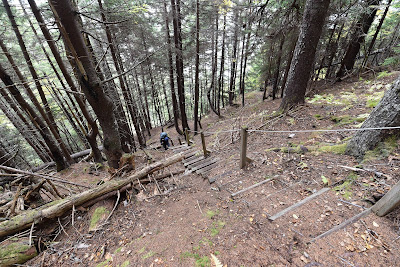 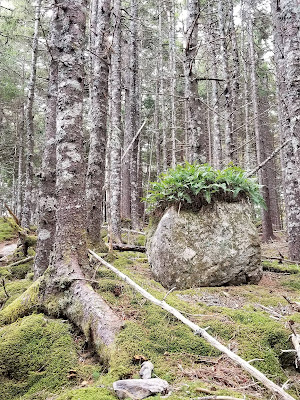 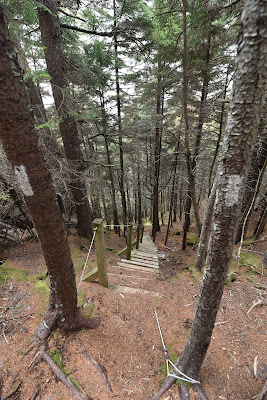 It turned out that this section of trail had no switchbacks. Instead, the ladder took us straight up the hill. When that ended we continued straight up on a natural staircase made of tree roots and mossy boulders. Then we came to another set of cable assisted ladders, then another straight climb. In total we climbed five sets of ladders, with 100, 42, 26, 10 and 21 steps respectively. By the time we reached the top of the 300 m tall (or so) cliff our legs were lodging desperate complaints against management and requesting new ownership. 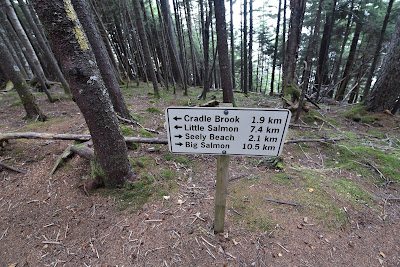 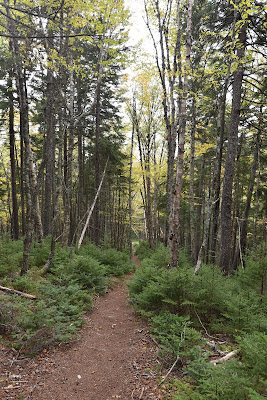 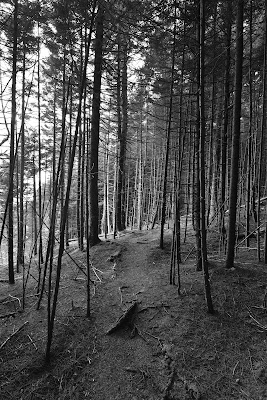 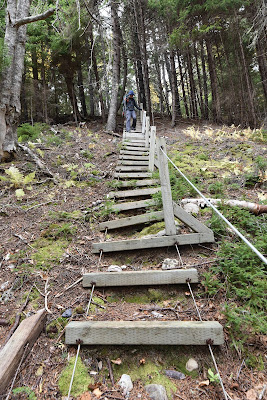 There was a very short stretch of trail after the summit through mossy, coniferous forest, and then we began working our way down again, nearly as steeply as the ascent. Again, the trail didn't take us along the cliff edges, as in the eastern sections, for which we were grateful, but we did descend two more ladders of 47 and 64 steps respectively. It looked like a lot of trail maintenance had been done in this section, which undoubtedly made the going easier. 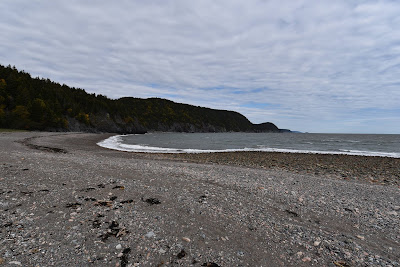 When we emerged onto Seely Beach we found another beautiful seascape. We could see the tall cliffs receding down the coast, giving us a visual summary of where we've been. The beach itself was quite long, and the trail skirted along the edge. 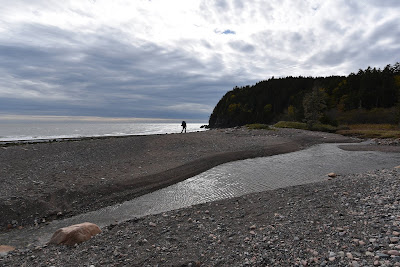 As we walked a stiff wind had sprung up, making our progress along the sand slow, and drowning the sounds of our footsteps in the noise of the waves crashing on the beach. We gratefully ducked into a sheltered campsite halfway along the beach to rest and enjoy some respite from the wind.

Here we faced a decision. It was only 2:30 PM when we arrived at Seely. It is Friday of the Thanksgiving long weekend, which means that we will now have to wait until Tuesday morning for the post office in St. Martins to reopen so we can pick up our resupply box with our winter clothing. We aren't supposed to camp at the Big Salmon River Interpretation Center at the end of the footpath, and we were too tired to walk the entire 30 km to St. Martins.  However, tonight we are supposed to get 5-10 mm of rain, which should continue into tomorrow afternoon. So, should we stay and camp at Seely, and walk the rest of the trail in the rain, or continue on? Since it was early in the day, and neither of us relish the idea of walking this trail in the rain, we decided to press on. Possibly this was a mistake. 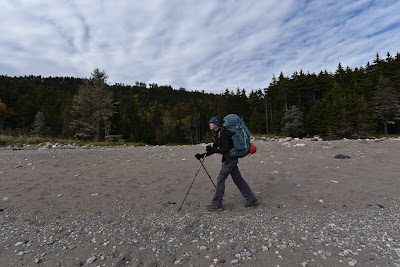 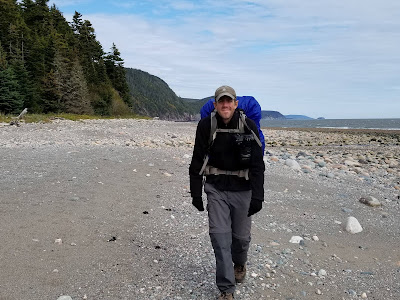 The guidebook described everything after Seely Beach as easy going, with no more CUDS (Coutless Ups and Downs). If you look at the elevation chart, this is partially true - there are no more ascents and descents from sea level to 300 m elevation and back. However, the trail was not a moose path followed by a cart track either, which the guidebook suggested.

The walk from Seely to Big Salmon River was an undulating footpath, which required almost continuous climbing over roots and boulders. It also involved many smaller climbs and descents as the trail skirted the edge of the ocean, at times going down to the beach, and then climbing back up above the tree line. At times it offered some glimpses of the ocean, and it did have a 55 step cable ladder at one point. 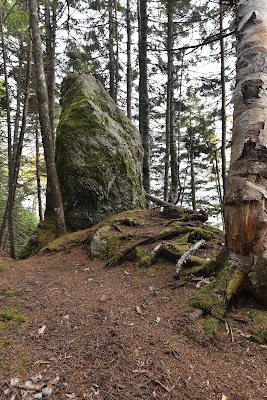 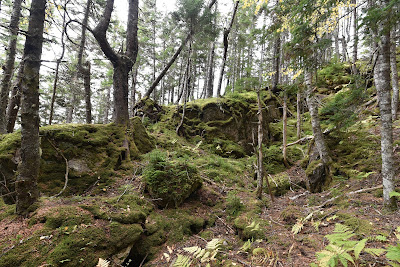 The trail wasn't overly difficult or strenuous, but for legs that were feeling the effects of two ascents and descents of around 300 m already today, it wasn't easy or fast going. If we had been racing to get to the Interpretation Center before they shut the gate at 5:00 PM we wouldn't have made it.

We took a short break at the Interpretation Center at Tufts Lookout.  There was a parking lot there, a lookout, lots of picnic tables, and a washroom, and there were quite a few other people who drove in. During this period we were summarily told off by one lady and another couple stopped their car, rolled down their windows and commented on our appearance and smell.  Apparently after 4 days on the Fundy Foot Path we are not longer in ideal appearance for fit society. 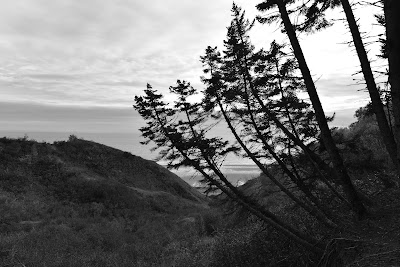 After Tufts Lookout the trail continued in the previous fashion, with a small section of nice crushed stone trail out to a waterfall. There wasn't much of a waterfall to be seen due to coastal erosion, but a few people were venturing out.  Immediately after the stream crossing the trail became more rugged again. 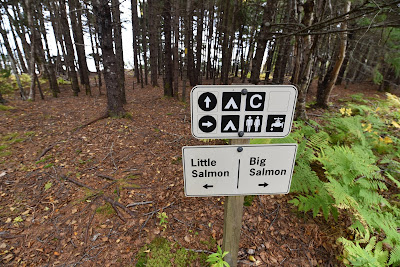 By the time we reached the campsites at Big Salmon River around 4:35 PM Sean was tired, fed up, and had had more than enough. We decided to stop here for the night, with 2.7 km of trail left for tomorrow, plus the walk in to St. Martin.  When I called to book a place in the hostel in St. Martin for tomorrow night so we can have a shower and do laundry the lovely lady on the phone asked if we wanted to be picked up at the Interpretation Center tomorrow. Oh, sweet, tempting, seduction. Although it was painful to do so, we turned down this kind offer. We will see this thing through to the end. Hopefully there aren't too many remaining cliffs to navigate tomorrow. 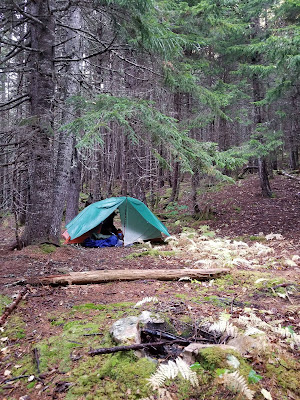