Today is election day !  So hopefully you have gone out, and exercised your right to choose your representatives! 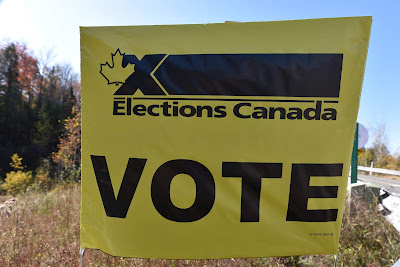 This morning was sunny and cool as we walked along the St. John River, heading out of Fredericton. As we walked through town, we passed a small tent city, full of homeless people living on the side of the trail. It was a stark reminder that although we are homeless too, it is by choice. Although I don't know the stories of any of those people, I imagine none of them had the luxury of making the choices we did.  Their situation was all that more striking given the prosperity of the city around us. Without trying to sound condescending, given many of the experiences we have had in the past 5 months, I have a great deal more sympathy for those who are placed on or seen as being on the outskirts of society. Like so many peoples, so many issues they are set aside and need more community action to assist them. To see this community was humbling and gave us a great deal to think about as we continued hiking. 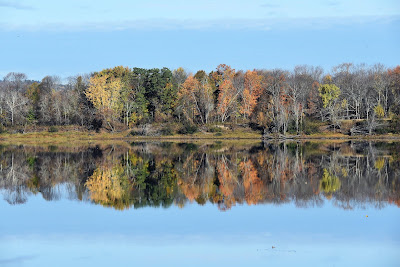 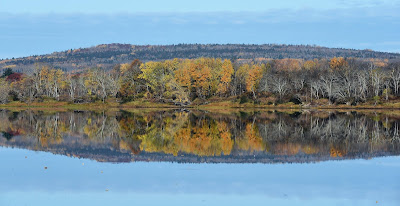 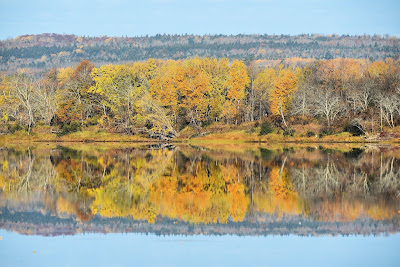 The walk out of Fredericton was as beautiful as the walk in was yesterday. We trekked down a treed path with houses on one side and the river on the other. The wind storm of a few days ago blew a lot of leaves down, but the bright yellow foliage of the white birches, the warm brown of the American beech leaves, and the deep red of the oaks were still set aglow above our heads. The fall sunshine was warm, and the sky was a strong blue.  The reflections in the water were stunning and provided Sean with some of his favourite moments for photography.  Regardless, the residents of Fredericton clearly live in a beautiful city set amid a fantastic landscape! 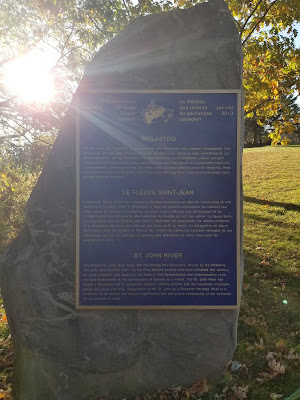 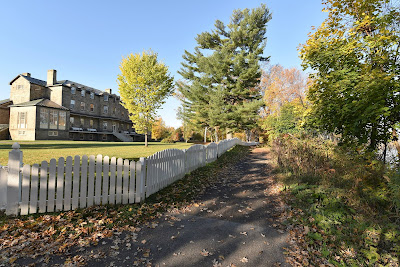 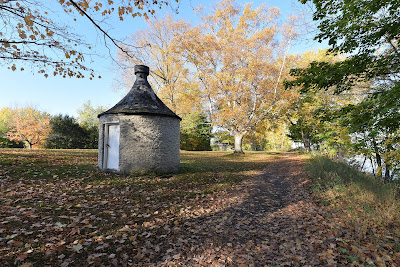 As we walked we were serenaded by the constant chatter of Black-capped Chickadees in the canopy. Song Sparrows and American Goldfinches moved about in the trailside bushes. A Great Blue Heron fished out in the river, perfectly reflected in the still water. A Double-crested Cormorant dove, leaving a small circle of ever expanding ripples on the surface, and a Common Merganser female glided silently by. A Bald Eagle soared overhead, and Herring and Ring-billed Gulls dozed in groups along the shore. We saw more birds on our riverside walk today than we've seen in a few weeks. 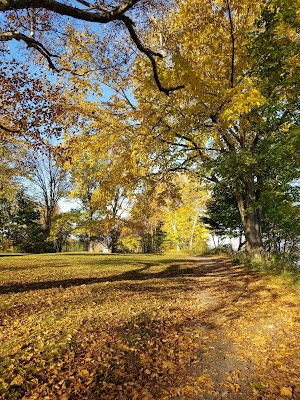 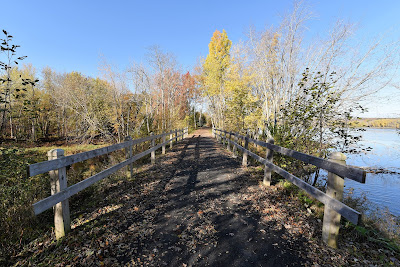 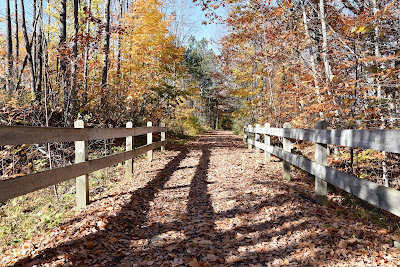 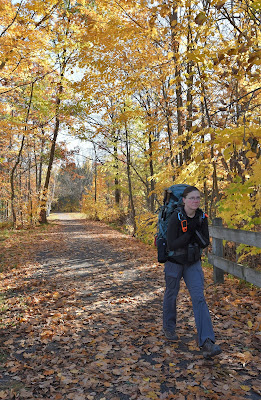 For the first ten kilometers or so we enjoyed the peaceful morning, the crunch of leaves on the trail, and the warming sunshine. There were quite a few people out and about, some of whom stopped for a friendly chat. 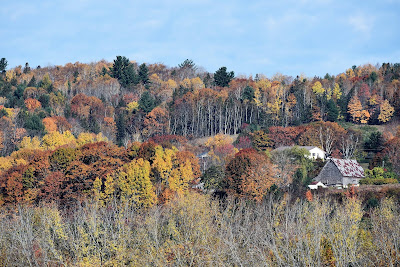 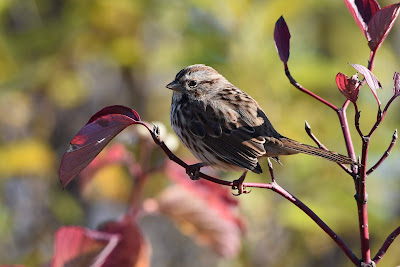 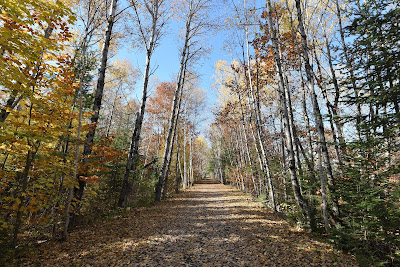 Eventually our lovely trail came to an end, and we were deposited onto the shoulder of a road. Thankfully it was a wide shoulder, and relatively flat, so it was pretty easy going, although there was a lot of high speed traffic. It looked like there was an old track running beside the road, and we'd kind of hoped to be able to use that, but it kept disappearing as it crossed what has become private property and developing suburbs. 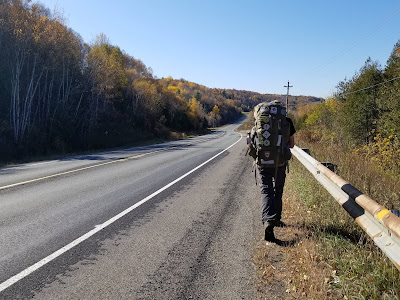 The road led us past a large hydro-electric dam and a fish hatchery, and then through a Maliseet community. 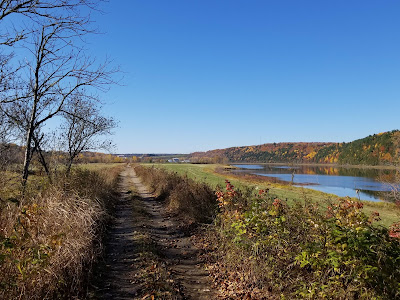 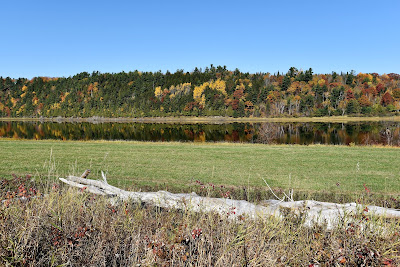 It was a prosperous looking community on the side of the river, and as we walked we noticed signs on the utility poles saying 'we honour our elders.' It made us think we could learn a thing or two from these people. 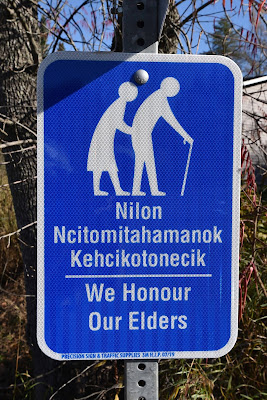 Shortly after passing through the small community we stopped at a busy convenience store for a cold drink and a short break. As we sat on the curb we saw several hunters stop for gas, some with the results of their efforts lying dead in the back of their trailers. 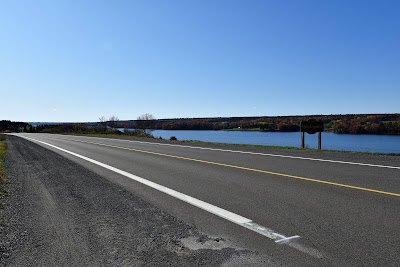 After our break we walked another 15 km, pretty much without stopping. The two lane road was busy, and still ran beside the wide, blue river. On both sides of the river were rolling hills checkered with colourful trees, bright green fields, and the occasional house. It was a beautiful landscape, and once again made us realize just how hilly New Brunswick is.

Around 3:30 PM we arrived at a campground in Woolastook, about 29 km outside of Fredericton. It is partially closed for the season already, but there are still a few occupants in trailers, and the owner kindly let us pitch our tent at a lovely site right on the river. 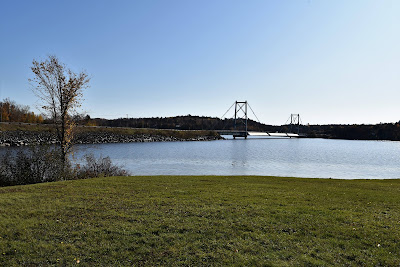 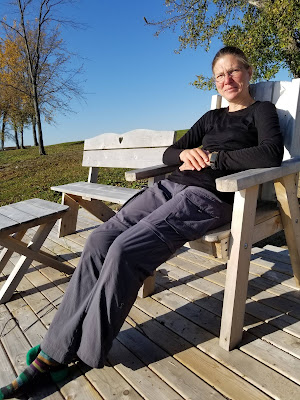 We have a beautiful view of the water and the span bridge that we will cross in the morning as we continue west. As we set up and made dinner a man drove up, stripped to his bathing trunks, and proceeded to go for a swim in the river! The sun is warm, but not that warm! While he paddled about he quacked back at the Canada Geese that were noisily enjoying a swim of their own. He must have been a kindred spirit (or maybe just a little nuts). 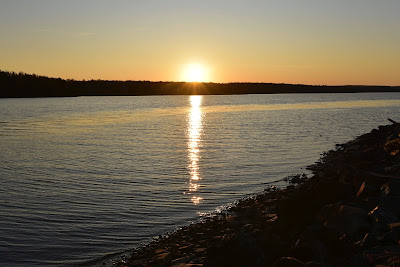 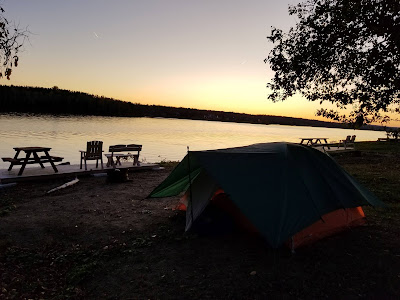 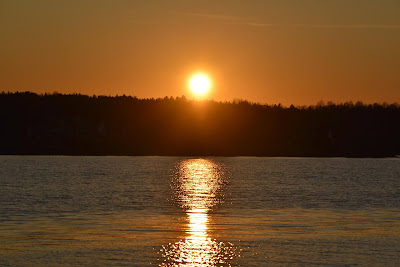 It is a beautiful spot to spend the night. As I write this the night sky is filling with stars. We were blessed with a beautiful fall day, and we were able to cover another 30 km of trail. We hope our luck will continue to hold! 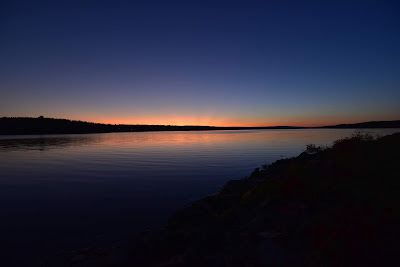