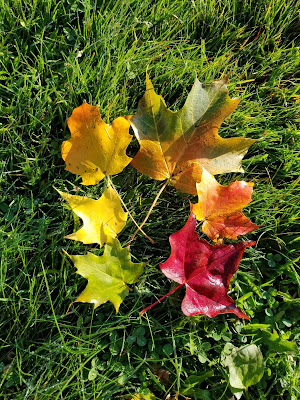 This morning began when the alarm clock went off at 5:30 am. It was time to get up and prepare for a radio interview with CBC Morning St. John. A huge thank you to them for giving us the opportunity to share our story! 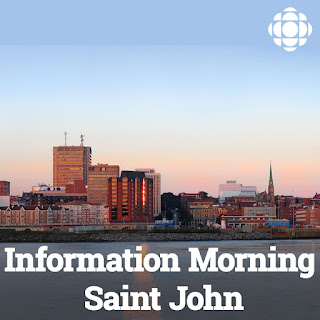 The interview went well, and afterwards we did some work on the blogs and packed before heading down to the post office at the edge of town to pick up our long awaited care package. It was full of treats and some winter clothes from my parents. My mother made some more cocoa balls, which were a particular favourite. A huge thank you to my parents for a lovely Thanksgiving box! 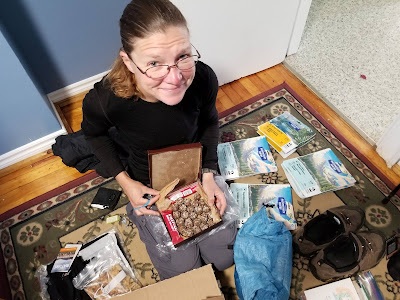 After packing the goodies into our backpacks we set off down the road towards Hampton. Although it was a beautiful hike today, this is one of the sections of trail that make us wonder about the route. St. Martins is 45 km from St. John, yet we are about to walk over 100 km on busy roads with no shoulders to get there. We can't help but wonder why. 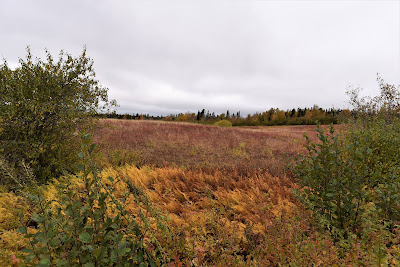 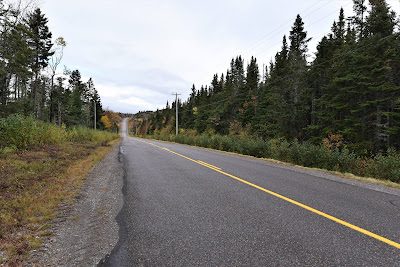 The walk began with a long, steep, climb up a hill - the first of many today. When we set out the sky was overcast and grey, but the fall colours turned the hills into glowing waves of bright yellow, orange, and red. It was truly amazing! 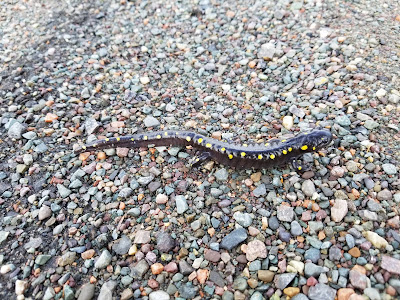 As we walked we were continually passed and re-passed by a group of dump trucks. They seemed to go back and forth with such speed that we couldn't imagine there was any time to load or unload between trips! Eventually we passed their destination and discovered they were stocking a depot with sand for the roads in preparation for coming winter weather. 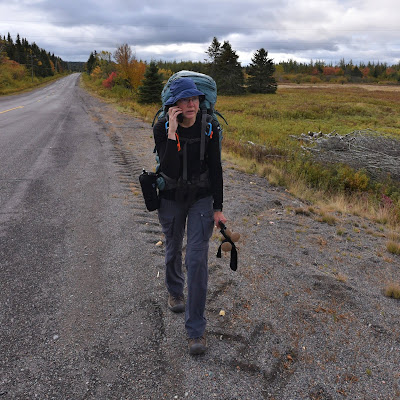 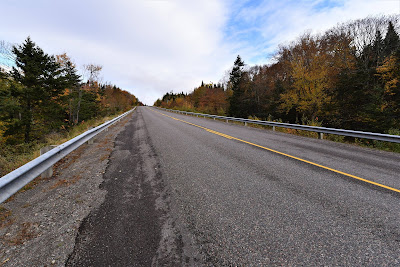 The noise of the trucks and the half dozen tour buses that passed us became a bit of a problem around noon, when CBC Fredericton unexpectedly called and requested an interview. We tried to find a spot slightly off the road, and sheltered from the wind, but there really wasn't anywhere to go. We made the best of it, and it seems the interview was aired today, so a huge thank you to CBC Fredericton for sharing our story as well! 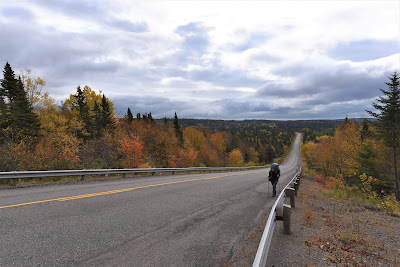 Just after noon the sun came out, warming the world and setting the fall colours aglow. Around the same time the landscape shifted from mostly forested to a mix of small woodlots, agricultural fields, and scattered houses. We enjoyed seeing curious horses, plump white sheep, multi-colored goats, and a llama in a few of the fields. 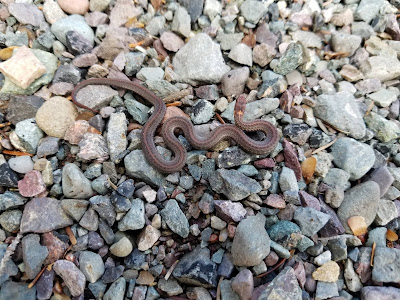 Other wildlife highlights for today included rescuing a spotted salamander from the highway, and seeing a very tiny garter snake with a red cross on the back of its head basking on the side of the road. Avian sightings included several flocks of resting Canada Geese, multiple American Crows, and one small group of highly excited and vocal Black-capped Chickadees. 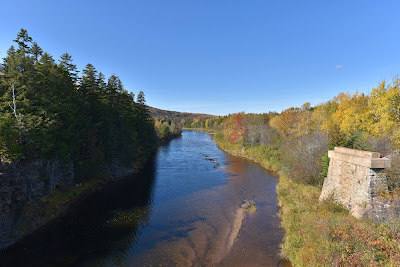 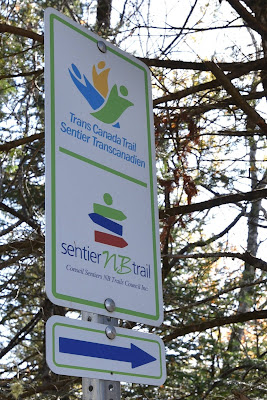 Around 4:30 PM we were walking through a beautiful community just outside of Titusville, when we were joined for a few kilometers by a 70 year old lady who was out for her walk. She turned around and walked with us, chatting all the while. It was very nice to meet her, and she introduced us to her neighbours as well.  Now past the distance were we prefer to stop the lady began asking her neighbours - all farmers - if they had room for a tent for the night.  Here it was fascinating to watch as each was told about our hike and have each person in turn respond that there was no room in this area for tents and that we should get in our car and drive to Fredericton for the night.  While having to continue walking was not a problem, repeatedly getting the same response suggesting that they did not hear what was said about our hike or that we must have a car near by was a little frustrating. 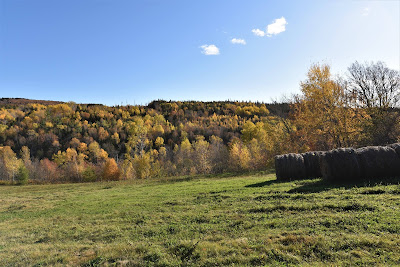 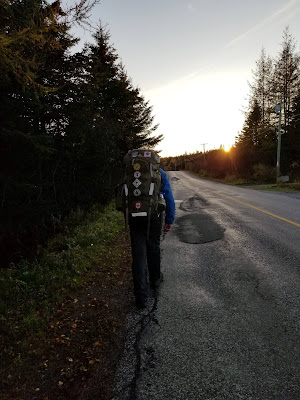 When we reached Titusville we stopped at the General Store and were delighted to learn that Mel Vogel had passed through there before us, and everyone remembered her! So cool! We met a man inside whose wife had heard our radio interview, and the owner of the shop very kindly provided some trail mix trail magic! By that point we had already walked 30 km, and still hadn't found a place to camp, so this was a huge boost for us! 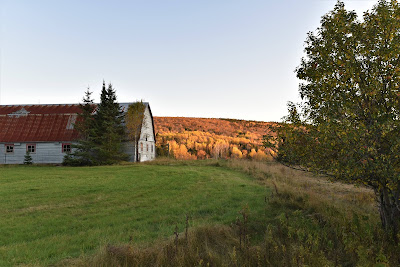 We walked into the evening, and enjoyed a beautiful sunset. As the sky turned a soft pink and yellow, and turned the rivers to ribbons of liquid gold, we spotted four White-tailed deer in a field. At our approach they took off, leaping and bounding in great bouncing arcs.

The light faded into darkness, and soon we were walking against a steady stream of headlights. There was a lot of traffic on the backroad, making it very difficult to see the edge of the road. Whenever there were gaps in the traffic though we had a clear view of the starry night sky. It was a relatively warm and still night, and actually quite peaceful during the moments we were alone out there. 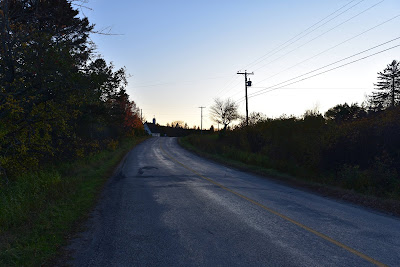 As we approached the edge of town Sean nearly walked into a deer. We were partially blinded by the oncoming traffic, and it was standing right on the edge of the sidewalk. It didn't move until we were almost beside it, and then it only walked a few paces and pretended to be a statue. 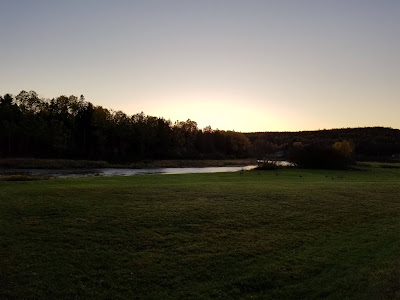 When all was said and done, we walked over 42 km today, reaching the town of Hampton a full day ahead of schedule. We don't usually walk that far, but are thinking this might be the new norm as we approach ever more built up areas. As we go to sleep we feel lucky to have the opportunity to see New Brunswick in the fall - it really is a beautiful place!