We have covered a lot distance over the past few days, so we decided to take a rest day in Grand Falls. This is one of the largest communities we've passed through since leaving Fredericton, and it has a lot to offer.

One of the things we noticed coming into town yesterday was that it seems to be truly bilingual. French is provided first on most signs, but everyone here seems to easily and readily converse in both English and French. It is wonderful to see and hear this, and reminds us immediately of our own shame at having lost the ability to speak French after leaving high school.

One of the claims Grand Falls has to fame is that it boasts the widest main street east of Winnipeg. Broadway Boulevard is a charming thoroughfare divided by a wide, treed, green island. It is lined with shops, restaurants, and cafes, and is a lovely spot to wander. 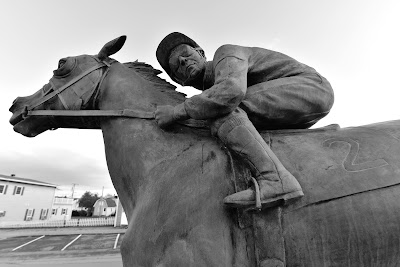 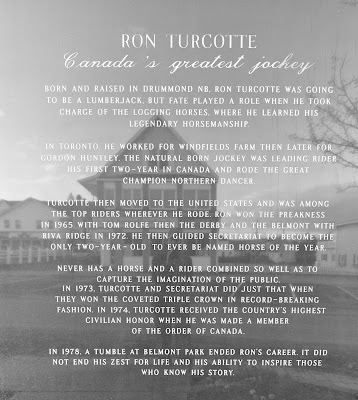 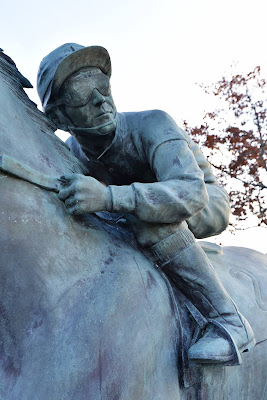 On the island are a number of historical plaques and tributes. One of these is a large bronze statue of the legendary jockey Ron Turncotte riding Secretariate, his world famous race horse. The pair won the US Triple Crown in 1973. Tragically, in 1978, at the age of 36, Ron Turncotte became a paraplegic as the result of a fall from his horse at the beginning of a race. He is one of the best jockeys of all time, and one of the most decorated athletes in Canada. He now lives near Grand Falls with his wife. 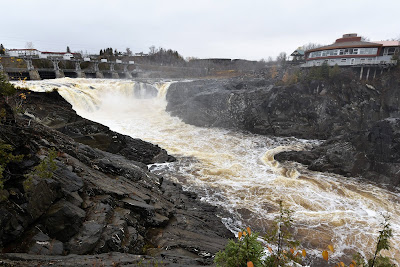 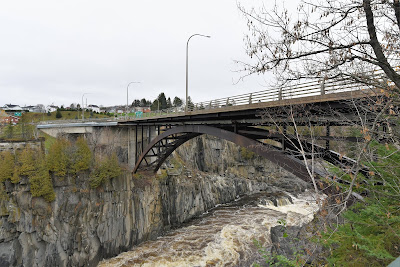 Of course, the main attraction in Grand Falls is the Grand Falls Gorge, with its impressive waterfall. There is a 1.6 km walking path around the gorge and falls, a tourism and information center, a campground, and even a zip line over the falls. Right at the top of the Falls is the Grand Falls Generating Station which a hydroelectric dam. The dam was built in 1931 and has the capacity of 66 megawatts. The gorge and falls are definitely well worth exploring! 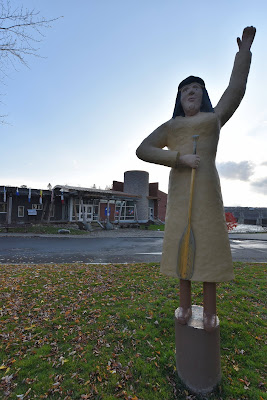 Outside the tourism center is a wooden statue of Malabeam, a Maliseet heroin who saved her people from defeat by the Mohawks five hundred years ago. At the time there was a Maliseet village on the banks of the Wigoudi (St. John River). Malabeam's father was captured and killed by the Mohawks, and Malabeam was taken prisoner. The Mohawks promised to spare Malabeam's life and wed her to a Mohawk warrier if she showed them the way to her village. She told the band of 300 Mohawks to keep their canoes close together and she would lead them down the river to her village. With a cry of triumph she led the group straight over the falls, killing the entire raiding party. The bodies of the Mohawks were found the next day, but hers was never recovered. 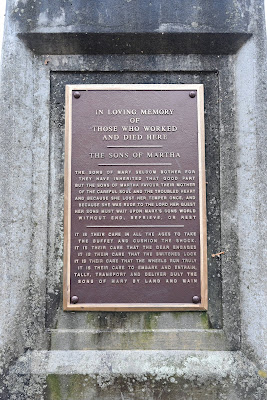 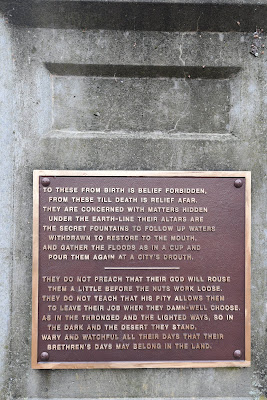 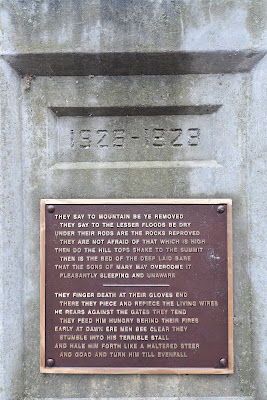 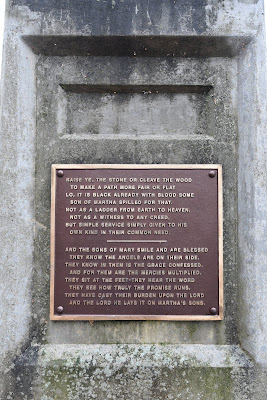 In addition to the waterfalls and regional history we also found yet another monument to the Sons of Martha and the Sons of Mary.  Based on a poem by author Rudyard Kipling and inspired by a story in the bible, these cenotaphs celebrate the efforts of engineers, builders, and labourers who work tirelessly to ensure the comfort and safety of those in their communities. In Canada the poem is part of the Ritual of the Calling of an Engineer and recited during the graduation ceremony in Universities and colleges across the nation.

THE Sons of Mary seldom bother, for they have inherited that good part;
But the Sons of Martha favour their Mother of the careful soul and the troubled heart.
And because she lost her temper once, and because she was rude to the Lord her Guest,
Her Sons must wait upon Mary's Sons, world without end, reprieve, or rest.

They say to mountains, " Be ye removèd" They say to the lesser floods " Be dry."
Under their rods are the rocks reprovèd - they are not afraid of that which is high.
Then do the hill tops shake to the summit - then is the bed of the deep laid bare,
That the Sons of Mary may overcome it, pleasantly sleeping and unaware.

They finger death at their gloves' end where they piece and repiece the living wires.
He rears against the gates they tend: they feed him hungry behind their fires.
Early at dawn, ere men see clear, they stumble into his terrible stall,
And hale him forth like a haltered steer, and goad and turn him till evenfall.

To these from birth is Belief forbidden; from these till death is Relief afar.
They are concerned with matters hidden - under the earthline their altars are
The secret fountains to follow up, waters withdrawn to restore to the mouth,
And gather the floods as in a cup, and pour them again at a city's drouth.

They do not preach that their God will rouse them a little before the nuts work loose.
They do not teach that His Pity allows them to leave their job when they damn-well choose.
As in the thronged and the lighted ways, so in the dark and the desert they stand,
Wary and watchful all their days that their brethren's days may be long in the land.

Raise ye the stone or cleave the wood to make a path more fair or flat;
Lo, it is black already with blood some Son of Martha spilled for that !
Not as a ladder from earth to Heaven, not as a witness to any creed,
But simple service simply given to his own kind in their common need.

And the Sons of Mary smile and are blessèd - they know the angels are on their side.
They know in them is the Grace confessèd, and for them are the Mercies multiplied.
They sit at the Feet - they hear the Word - they see how truly the Promise runs.
They have cast their burden upon the Lord, and - the Lord He lays it on Martha's Sons !


Grand Falls is a border town near to the United States (about 3.5 km away). As we leave here on the Great Trail we will be staying on the eastern shore of the St. John River, since the border with United States runs right down the middle of the St John River. Between here and Edmunston we will be looking a cross the water at another county - another first for us along The Great Trail!