This morning we had a late start, but it was cool and not raining, so we were very happy. The trail out of Badger began as a very wide, sandy road. On the way out of town we got a chance to chat with several residents and admired the local historic fire engine. 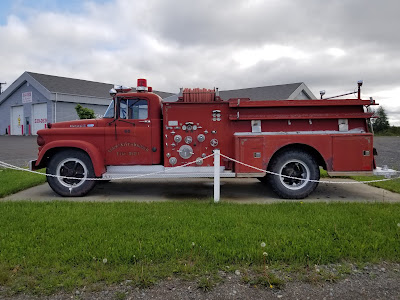 Almost immediately however it turned into a newly graded rail-bed, with lots of fresh, deep, loose gravel. In some places it was ankle deep. Sadly, those were the trail conditions for the next 26 km, which left us feeling like we were gradually ascending by clawing our way up a pebble beach.

The exhausting trail conditions aside, the landscape today was phenomenal. It was generally more open again, with many wet meadows, small lakes and ponds, and rivers. It was also amazing to see the dark green hills, or "mountains" jutting up in the background. These steep rock formations looked like something out of a science fiction movie - possibly the landing site for alien space ships. These formations and the coming Topsails are called Tolts, and are the the remains of the post glacial landscape and years of erosion.

Perhaps best of all, the walk today was through an area that was wild and remote, and for much of the day all we heard were the songs of birds, the buzz of the mosquitoes, the burbling of running water, and the crunching of our own boots on the gravel trail. Being in a place without other human sounds for hours at a time is a rare treat. 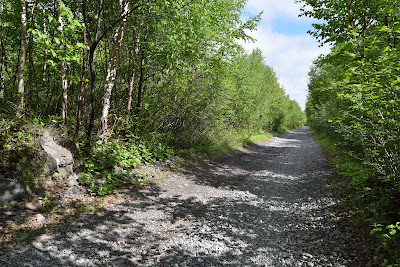 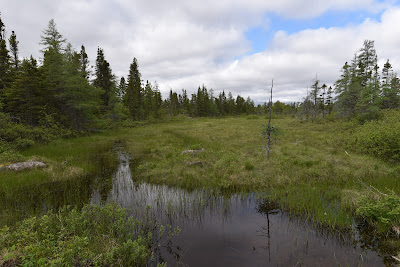 This was not to say that the day was entirely peaceful. There were at least seven pairs of Greater Yellow-legs nesting in the vicinity of the trail, and members of each one took it upon themselves to dive bomb and harass us at full volume, often for 10 minutes at a time. 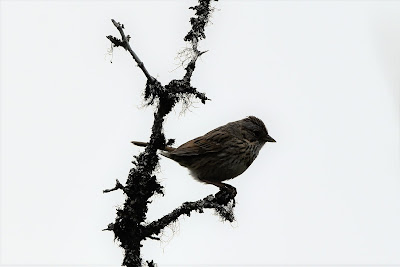 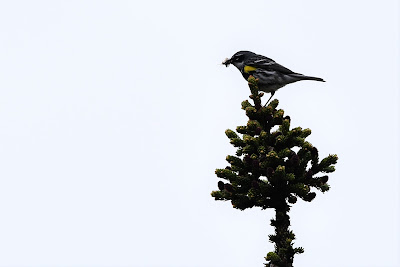 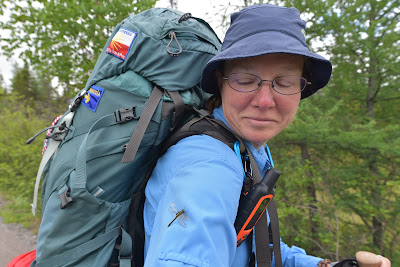 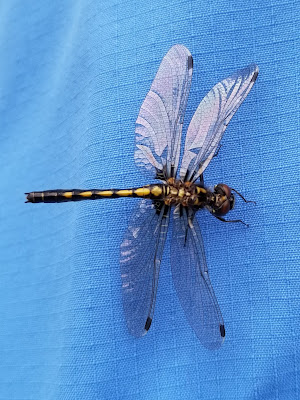 At one point I also had a hitchhiker tag along for about 10 km. I've been dreaming of having my own trained dragonfly to munch on the biting insects that try to munch on me, and today I did! Too bad it eventually took off, ending our mutually beneficial partnership.  Regardless, as we ventured down the trail we were led and followed by flights of dragonflies and butterflies for hours - it was a truly amazing experience. 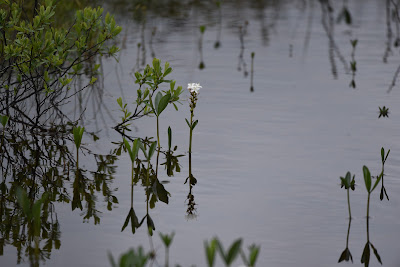 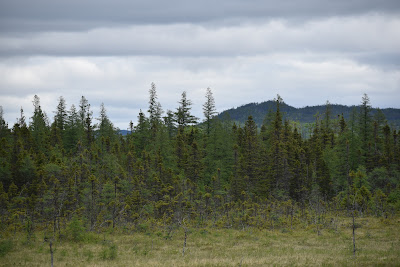 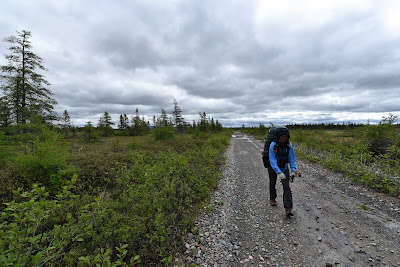 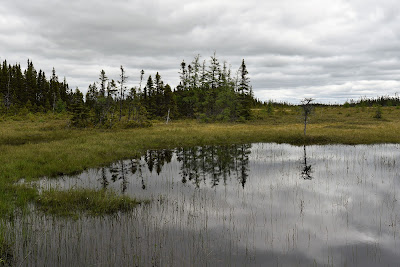 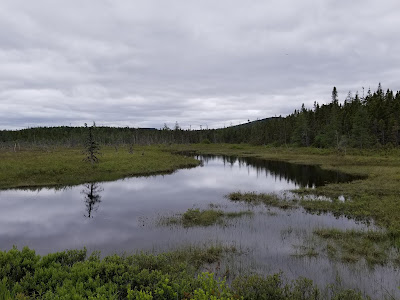 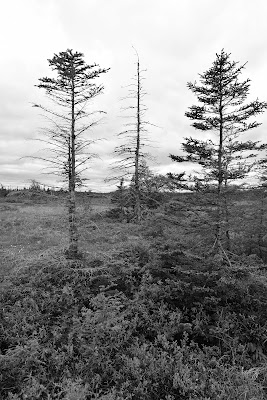 Much of the day's hike took us through an amazing landscape varying between marshland, forested stretches, and hills - and all of it was a challenge given the condition of the trail.  While we took hundreds of pictures it soon became evident to us that no image, nor any description could possibly capture the subtle and striking beauty of the region.  Towards the afternoon we saw a few cabins and cottages, some of which were very large and modern looking. We were also passed by two ATVs, giving us the sense that we were approaching civilization again. 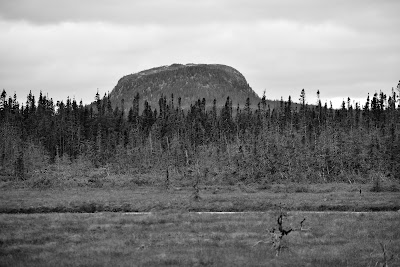 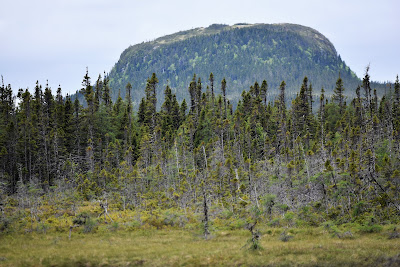 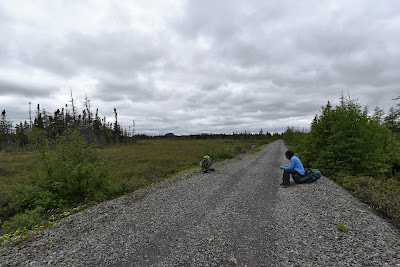 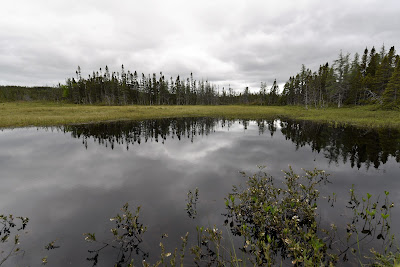 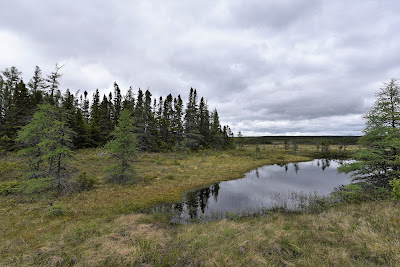 By around 4 PM we hobbled into Millertown Junction, which is a small community of houses on the edge of a lake. It was very cool to see the remains of the concrete train platforms on the side of the rail trail as we came to the junction. The platforms were slowly being overtaken by bushes and small plants, but still a recognizable sign of what used to be here. 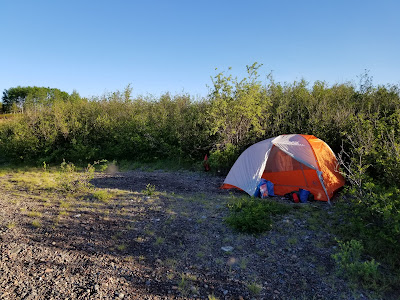 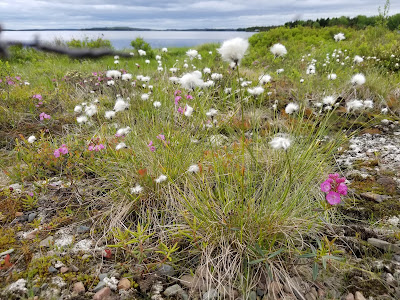 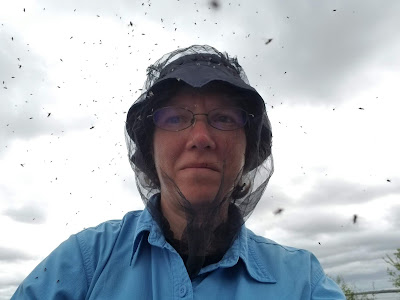 Tired and sore we decided to pitch our tent on the beach, partially sheltered from the road and houses by a row of shrubs. The spot has a beautiful view, but more blackflies than anywhere I've ever worked or camped. Either we just picked the buggiest spot in Newfoundland to camp, or this is a taste of what is to come out on the marshes tomorrow!