We woke up this morning to a nice warm cabin, made coffee and oatmeal on the wood stove, and headed out around 7:30 am. 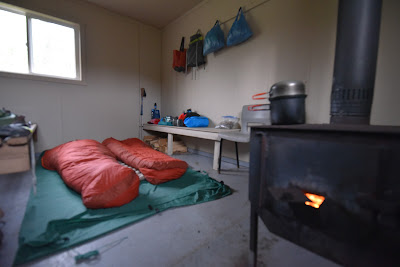 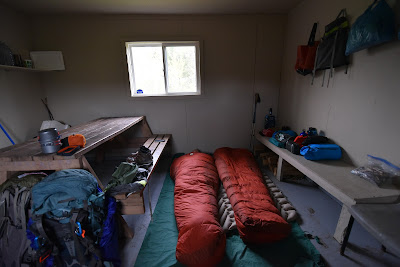 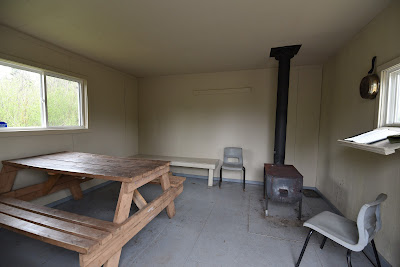 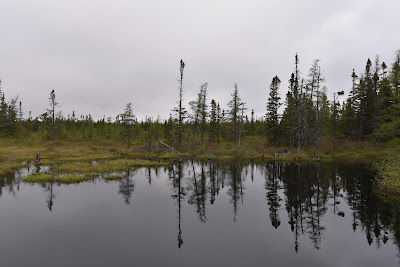 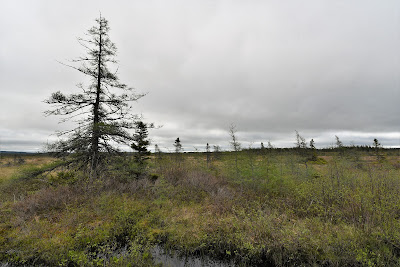 As we crossed the trestle bridge and headed down the path it was overcast and cool. This was fine by us, since it meant no blackflies! This morning we walked between two Important Bird Areas - Terra Nova and the Bay du Nord Wilderness Reserve. Terra Nova is known for Willow and Rock Ptarmigans, and the Bay du Nord wilderness Reserve is known for caribou. We spent the morning careful scanning the barrens and bogs for a sign of any of these species. We are fairly sure we saw caribou tracks and scat, but sadly no sign of the real thing. 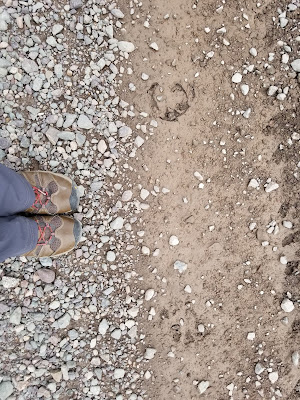 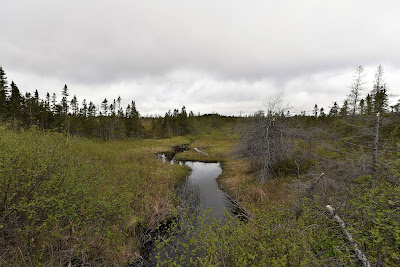 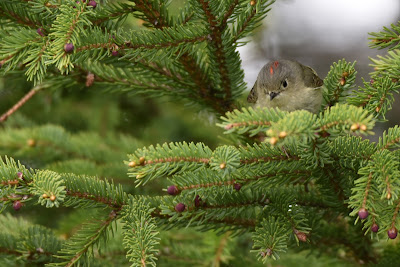 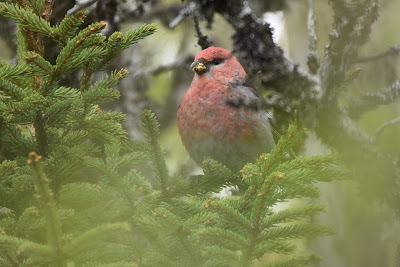 We did notice another subtle change in the landscape again today however. As we approached Terra Nova the soil became very sandy, at times with golden dunes on either side of the trail. 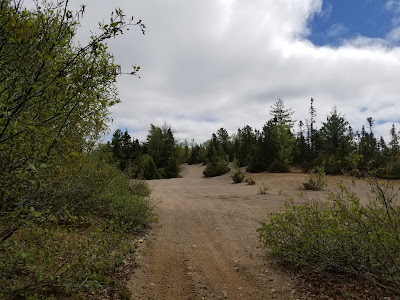 The community of Terra Nova was small but beautiful. There was a main street with a large park and camping area, and a convenience store that was right on the trail, and open! We treated ourselves to ice cream and ice tea, but unfortunately by that point the blackflies were swarming so badly it was impossible to sit still and eat or drink anything. 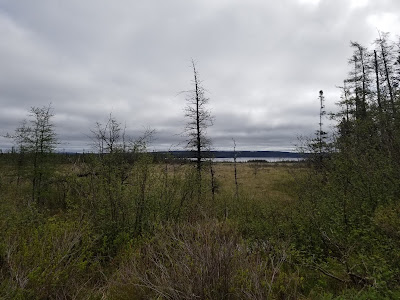 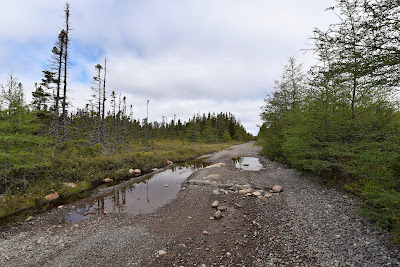 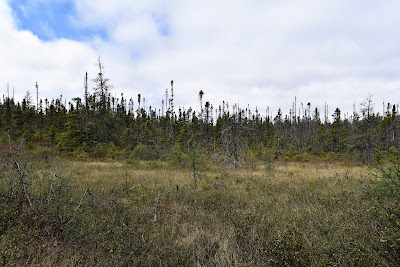 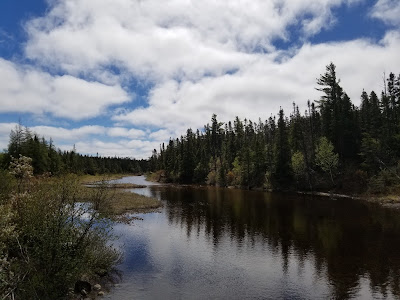 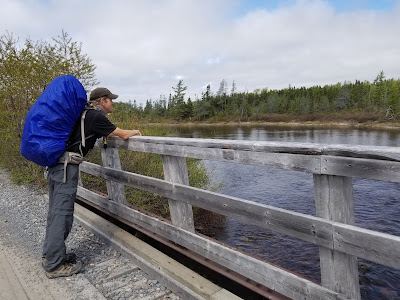 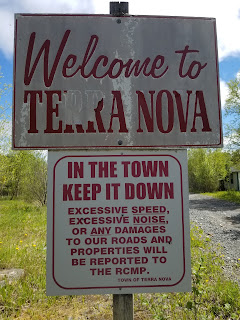 On the way out of town we crossed a beautiful covered trestle bridge over a large sandy lake. There were two guys fishing who called up to us for a chat.  Apparently the fishing was pretty good on the lake, but the flies were bad. 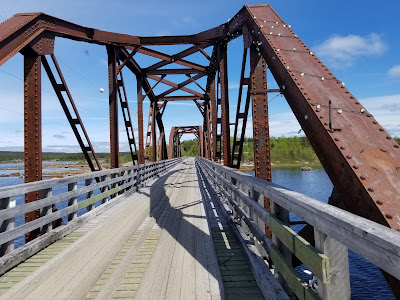 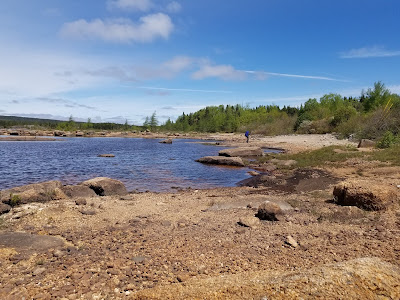 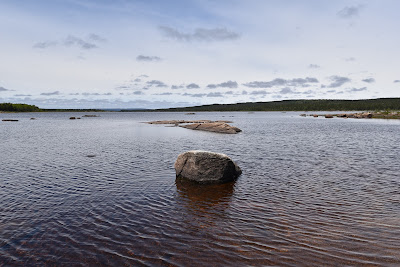 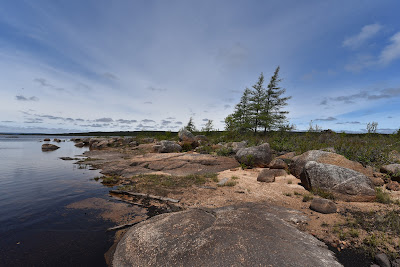 After Terra Nova we entered a landscape that looked a lot like the shield region of northern Ontario. There were large exposed granite rocks covered with large patches of deep, crunchy, light green lichen, as well as patches of flatter coloured lichens. 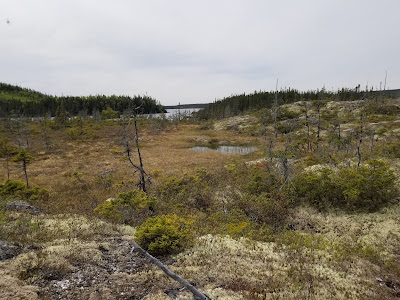 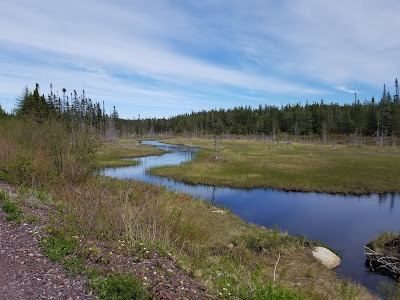 We were aiming to find somewhere to camp around 10 km after Terra Nova, but we failed to find any suitable places that had both a flat place to pitch the tent and available water. We continued walking until we came to a sign suggesting there was another warm-up shack 5 km down the trail. Dreaming of a second night of warmth and coziness we perked up and made a final push. 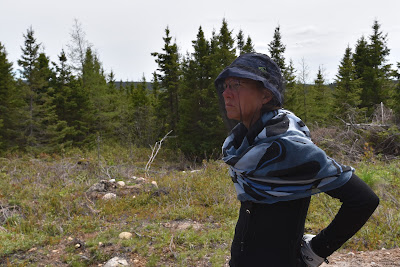 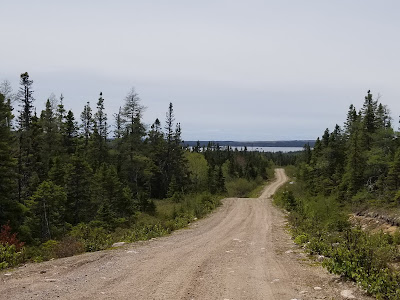 Sure enough, 32.5 km from where we started this morning we found another warm-up shack. This one had been destroyed. The smell of rotting garbage from an overflowing bin beside the door permeated the shack, a step was missing, there was a smashed up picnic table outside, and there was broken glass on the floor inside.  We were shocked by the difference, and suddenly very appreciative of the tireless efforts of the volunteers who take care of these shelters, maintain them, clean them, and make sure they accessible to everyone, despite the senseless and pointless destruction others leave behind.

Very disappointed we decided to continue on. 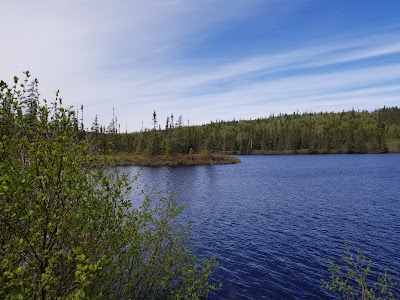 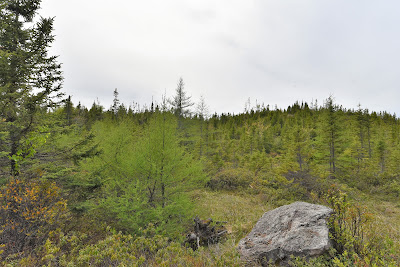 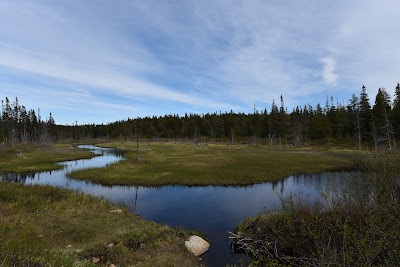 Not too far beyond the shack we spotted an ATV trail leading off into the bush, and followed it up to a hydro corridor. There was flat ground, so we decided to pitch the tent in order to escape the bugs. We could see a small lake from the tent, so I bush-wacked down to fill the bucket with water. Anyone who has bushwacked through dense, shrubby spruce bog can appreciate what that was like. 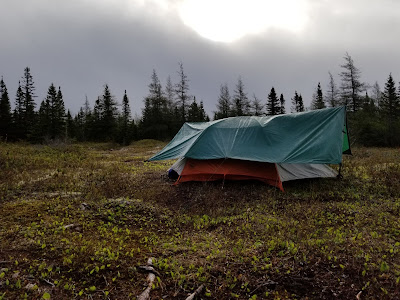 Once the water issue was sort-of fixed we settled down to make dinner. As we did so a pair of curious Canada Jays stopped by, and one was cheeky enough to come right up to the tent, hopping on my backpack to see if there was food, and eventually taking some nuts from my hand.

The sun is setting in a beautiful sky, the moon is already up, and the temperature has fallen enough for the bugs to retire for the night. It was a very, very long day, but it ended well enough.
Posted by Sonya and Sean at 7:49 PM