When we opened the tent door and looked out at 6:30 am we were surprised to find the hilltop on which we camped swathed in fog. As I crawled out of the tent in the crisp morning air to get the stove going for coffee, there was suddenly a lot of calling and screaming in the trees beside our campsite, and seconds later a Bald Eagle flew out of the trees carrying a madly flapping bird in its talons. This was an unexpected bit of drama before breakfast. 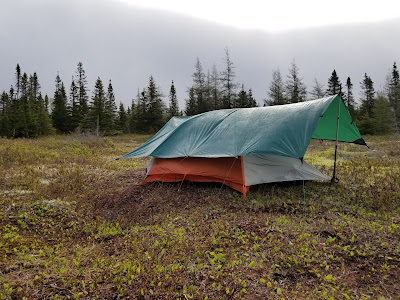 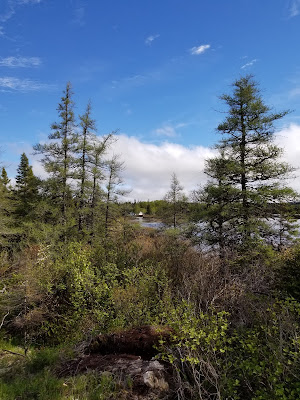 By the time we had everything packed and cleaned up the sun had burned off the mist, and was beginning to warm everything up. As we rounded a bend in the trail and came upon the second arm of Maccles Lake, which was stunningly beautiful, the sun made a breif appearance. 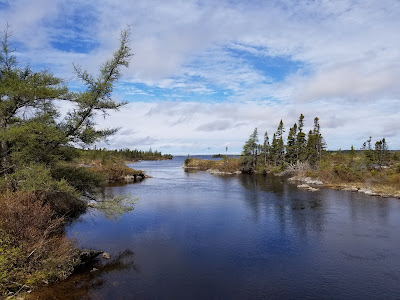 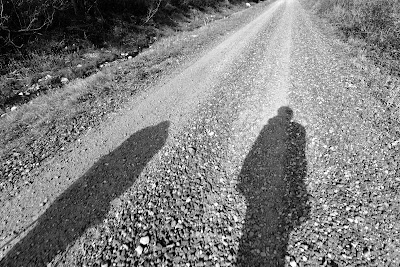 At this point we crossed the Dover Fault, which runs between the branches of Maccles Lake. This is the point where two continents, Laurentia and Gondwana joined and stuck together, meaning that one part of the province is historically related to Africa, while the other part derives from the Canadian Shield. 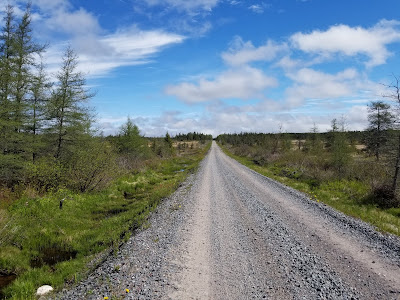 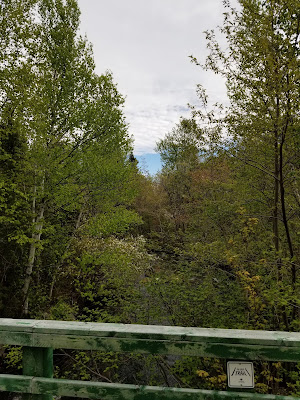 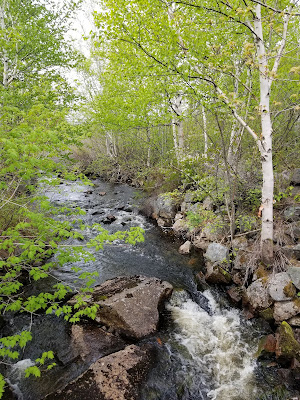 From there it was a relatively short walk to Alexander Junction, which was a cross-roads offering the option to go to Glovertown (the entrance to Terra Nova National Park) or continue to Gambo.  Although we would have loved to visit Terra Nova it would have involved quite a bit of road walking, and it seemed like the Visitor's Center, bird sanctuary, bird observatory, and some campgrounds may or may not be closed, so we decided to continue on to Gambo. 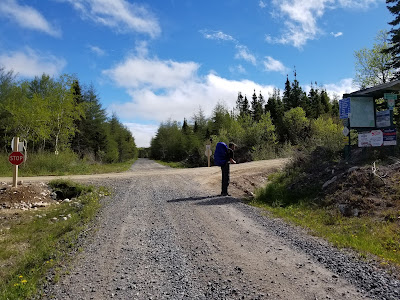 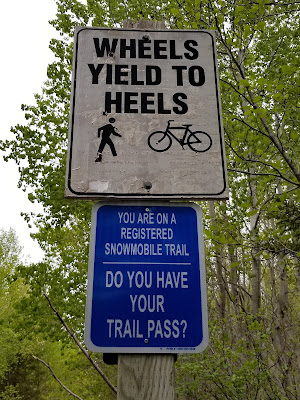 Just before we reached Alexander Bay, which was a community of very nice cottages on a gorgeous lake that could have come straight out of the shield region of Ontario, we were offered a lift by two retired gentlemen in an ATV. We politely declined. When we reached Alexander Bay we found them on a pull-off with a broken axle. It was the first time they had taken their new ATV out for a spin. Rotten luck. 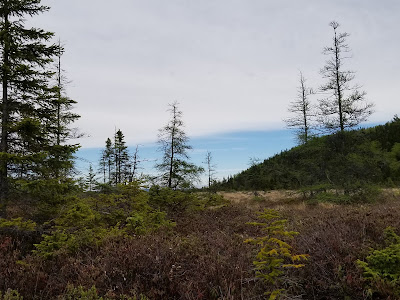 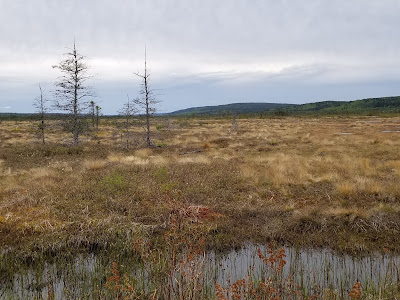 Around noon we came to a very beautiful stretch of trail bordered by a stand of white birch trees. The understory of slower growing balsam fir and spruce was well established, providing a textbook example of forest succession in the Boreal. When naturally occurring wind storms or fires clear large areas of coniferous forest, fast growing deciduous trees such as birch and aspen will quickly colonize the site. Once a shaded overstory is established the slower growing, shade tolerant conifers will start to grow. Eventually the faster growing, shorter lived deciduous trees will be outcompeted and the conifers will prevail. 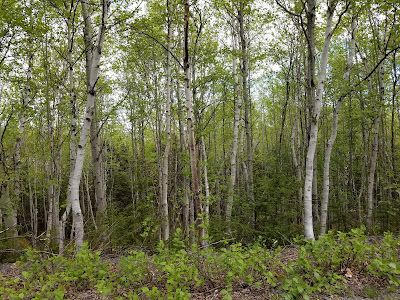 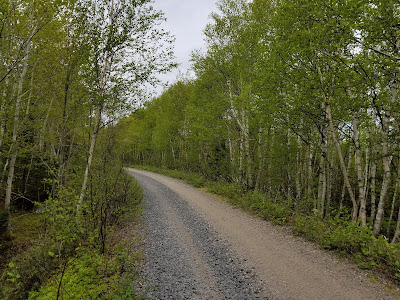 The birds we heard in the birch stand included American Robins, Wood Thrush, Ovenbirds, American Redstarts, and Black-throated Green Warblers. These are all species that are familiar residents of the Great Lakes - St Lawrence and other deciduous forests farther south. They have a special place in my heart, because I did my MSc research on their nest survival in forest stands in Ontario.  It is also a powerful reminder that many of the birds we see and hear in the southern portions of Canada can also be found in the Boreal.

Just before we reached Gambo we emerged from the forest into an open bog area. The yellow and red grasses were dotted with tiny white flowers and clumps of dark green conifers, and the clear blue of the sky was reflected in the small lakes. 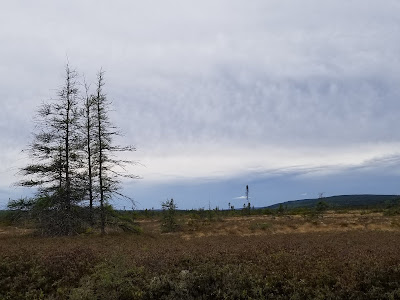 One of these small lakes had decided to inhabit the middle of the trail. It extended into the marsh on either side for quite a long way, so the only option was to remove our hiking boots, put on sandals, and wade on through. 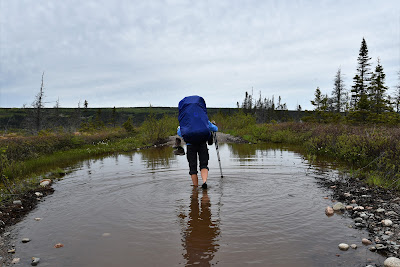 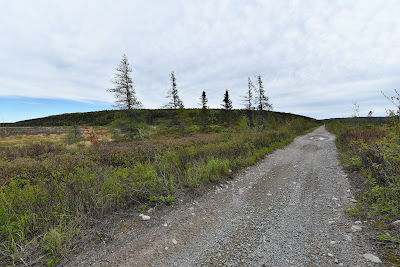 
The approach into Gambo was over a trestle bridge and around a small tidal flat. The tide was partially out and we could smell the salty ocean in the breeze. There were two families of Black Ducks and a family of Canada Geese paddling around in the shallows as we walked by. 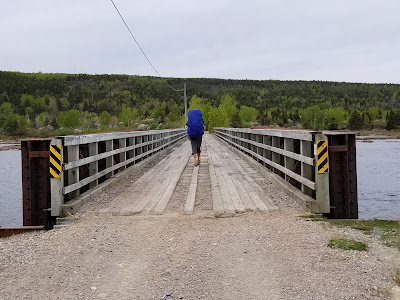 Just on the edge of town we found a wonderful little place called Cashin's Chestnut Tree Cafe and Grocery. From the outside it looked like an unassuming little place on the side of the Great Trail. Inside it was warm, cozy, and filled with the smells of breakfast cooking. The warm wood interior was filled with local art, crafts, books, and candles, as well as a small grocery with basic supplies. We both ordered coffee and the regular breakfast, and what arrived seemed like heaven on a plate! It was warm cinnamon toast dripping with butter, yogurt with fresh strawberries, bananas, eggs, and ham, all covered with maple syrup. Food tastes better when you're hiking, but this was made by a kind, friendly, talented cook who sang as he worked, and it was truly wonderful. 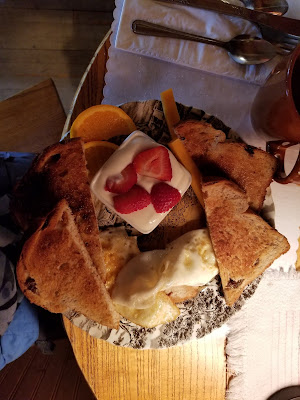 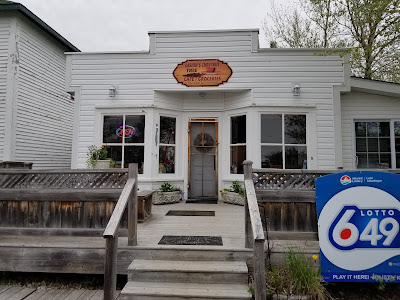 After our scrumptious meal we headed up through town to the David Smallwood RV Park. This private campground was a former provincial park, and offers secluded, wooded sites, walking trails to a waterful, and best of all - laundry facilities and showers! 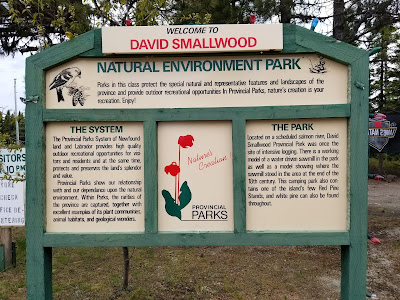 We got in, set up, and as we headed to the showers it started to rain. As we waited for our laundry at the comfort station we listened to live music being played and smelled moose stew cooking for the Father's Day celebration. 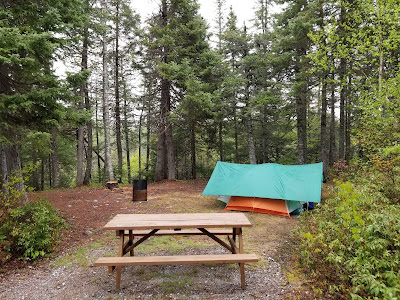 As I lay here in the tent listening to rain still falling heavily on the tent, I can't help but be amazed by the beauty that can be found in Canada's wilderness.