Birding the Great Trail from Clarenville to Grand Falls - Windsor

For the first part of our hike, from St. John's to Clarenville, we had a chance to see many different sea birds, gulls, and songbirds associated with coniferous Boreal habitat. To read about these opportunities please click here.

Northwest of Clarenville the composition of the Boreal forest changed slightly to include more deciduous tree species, such as white birch, trembling aspen, alder, and a few maples in addition to the white and black spruce, balsam fir, and tamarack. This shift brought a corresponding change in the bird species we observed. We still saw quite a few White-throated Sparrows, Dark-eyed Juncos, Yellow-rumped Warblers, and Black-capped Chickadees. However, species like Black-throated Green Warblers, Yellow Warblers, Wood Thrush, Ovenbirds, American Redstarts, and American Robins, which typically occur in deciduous or mixed forests began to dominate. We also spotted six Ruffed Grouse in this stretch.
As the trail skirts around the western edge of Terra Nova National Park, which is also an Important Bird Area, there is a very exciting opportunity to spot Willow and Rock Ptarmigan, two birds of the Arctic Tundra. 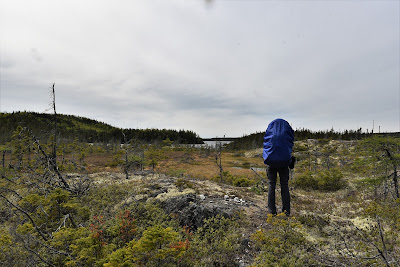 One of the highlights of this portion of the trek came near the community of Port Blandford. We spent one night in a small warm-up shelter for snowmobilers that was located on the edge of a large river and waterfall. As we fell asleep beside the wood burning stove we heard the repeated calls of a Great Horned Owl! 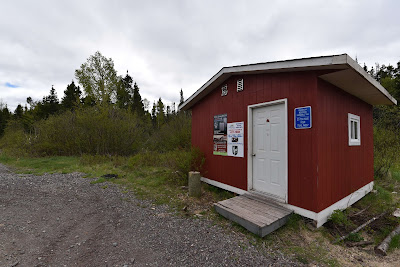 The trail then passed quite a few lakes with cottages and cabins lining their shores. Almost every single one of these lakes was occupied by a pair of Common Loons, and we spent many happy nights falling asleep to their haunting calls on the nearby lakes. We've also seen small groups of Ring-necked Ducks on many of less developed lakes. 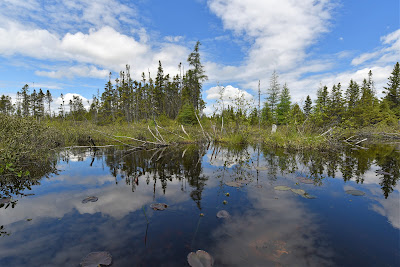 As we approached the communities of Gambo and Gander we passed quite a few open barrens and bogs. The winnowing of Wilson's Snipes was a frequent sound in the evenings, although we rarely caught sight of the individuals who were responsible. In this area we also spotted quite a few Ring-necked Ducks diving for food in the small Boreal lakes.

In the area around Norris Arm and Bishop's Falls Bald Eagles became a common sight perched on the edges of lakes and rivers. One memorable morning I watched as an immature Bald Eagle caught a Canada Jay in the trees beside our tent and carried it off as I was boiling water for coffee. Perhaps the presence of the mighty Exploits River, the longest river on the island, and the biggest Salmon river in the world, helps support the Eagle population in this area.

As we approached Bishop's Falls we also began to see an increase in the number gulls flying past overhead. Norris Arm is on a deep branch of the Atlantic, so we got to enjoy a glimpse of Ring-billed Gulls, Herring Gulls, and other species flying over.

Other birding highlights for us in this section included getting a close-up view of a Hairy Woodpecker, and spotting two pairs of Greater Yellowlegs perching atop trestles as they attempted to protect their nests from potential predators.

As we set off into the wild, remote centre of the province we can expect another shift in the landscape which will undoubtedly bring exciting new bird species with it.