This morning arrived rather too soon, but a look outside showed a bright, sunny day, even at 6:30 am! It took us a while to get everything organized, but we found ourselves standing beside the official zero kilometer marker at the eastern terminus of the Great Trail by around 9:30 am. After so many months of preparation and hard work it was quite surreal to find ourselves standing there, and suddenly the magnitude of what we are embarking on felt very real. 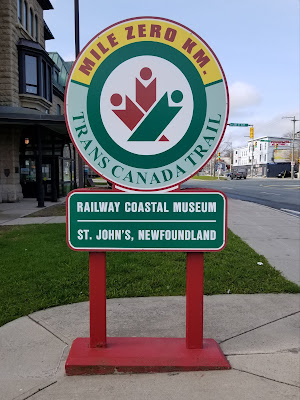 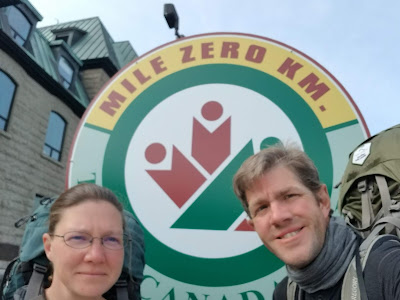 The official eastern terminus of the trail is located in front of the Railway Coastal Museum. This is a fantastic place to visit if you are in the St. John's area. It has very creative and displays that tell the story of the railway in Newfoundland, how it shaped the island's history, and the role it played in confederation. Well worth a visit. 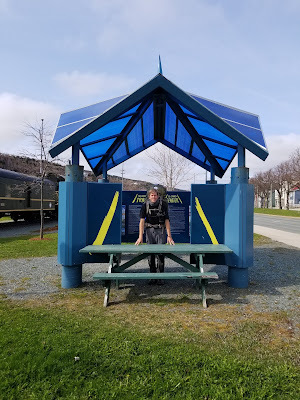 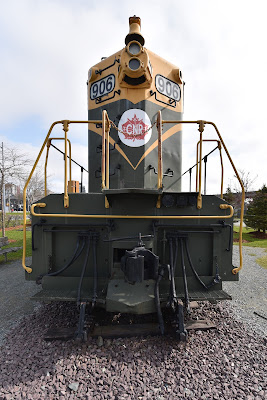 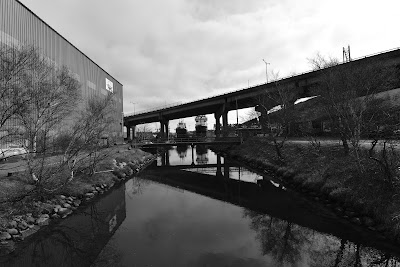 As we started down the wide, gravel path we were impressed to discover a series of interpretive signs describing the wildlife, trees and plants that can be found along the Great Trail. Half the signs were about birds! 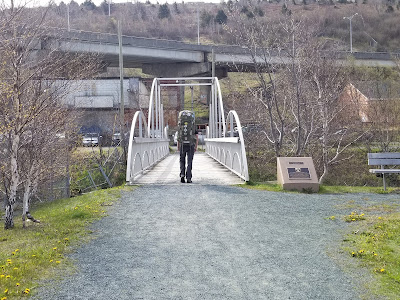 Our entire day was spent walking on the Grand Concourse, which is a wide, flat, multi-use trail that wends it's way through suburban neighbourhoods, urban parks and recreational areas, and some wilder natural areas. It was mostly lined with Boreal trees - lots of balsam for and birch, which provided wonderful shade for much of the walk, and lent a faint aroma of Christmas trees to the air. 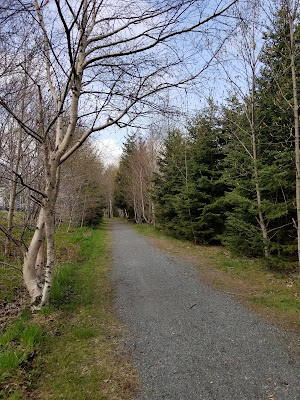 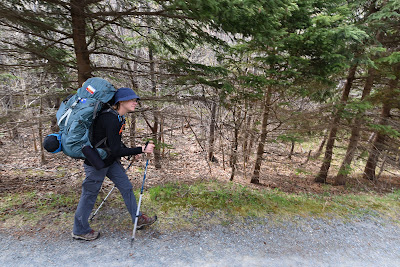 It was a warm sunny day, and as we made our way out of St. John's and into Mount Pearl we encountered many people out enjoying a Sunday morning jog, bike ride, or stroll with their children or dogs. Everyone was very friendly, stopping to say hello as we passed, and at least a dozen people asked us where we were hiking to. The reactions to our explanation ranged from complete denial that it was possible to walk across Canada (one lady), to an exclamation of "that's the coolest thing I've heard all week!", to many many good wishes. 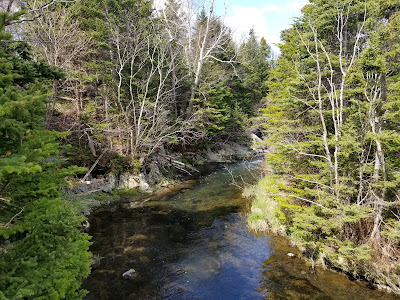 When we reached Paradise we stopped for a quick coffee break at a fortuitously placed Tim Hortons, and then took a moment to rest at a very nice pond occupied by several Mallards, a group of Black Ducks, and a few Ring-billed gulls. When we stopped to think about it, we realized that two weeks ago we walked along the coast of death to the end of the world, yesterday we began our journey at the Cape of Hope, and today we walked through Paradise. Hmmm. 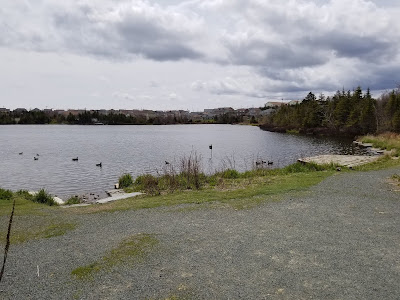 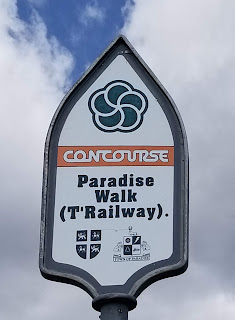 After Paradise the trail turned into a somewhat less developed railbed, with much larger, purplish gravel. Although it was still flat and relatively easy going, this trail bed was oddly painful to walk on, and we suddenly understood the warnings and comments of those who have come before us. 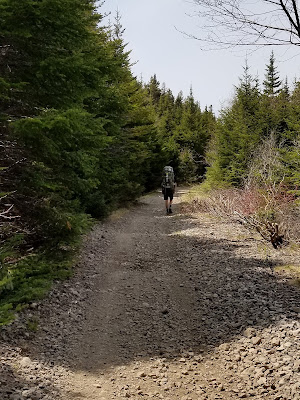 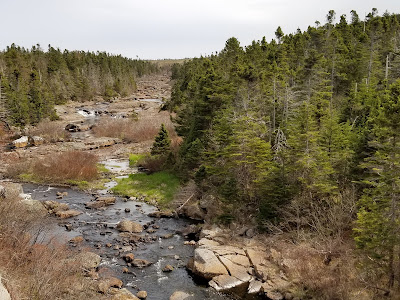 This quieter stretch of trail gave us some pretty exciting bird highlights - including close up views of two Ruffed Grouse and one Black-and-White Warbler! For much of the morning we had mostly seen familiar birds from urban areas across eastern North America, such as American Robins, American Crows, European Starlings, American Goldfinches, and a Tree Swallow. By far the most prevalent species we saw darting across the trail and singing in the trail-side shrubs and bushes was the Dark-eyed Junco. This little grey and white songbird is a familiar winter visitor to bird feeders across Easter North America, but many of them migrate north to breed in the Boreal forest during the summer months. They are an important reminder that we need to help protect the Boreal if we want to continue enjoying their presence farther south. 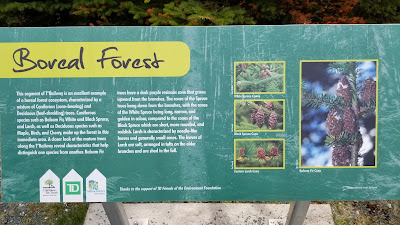 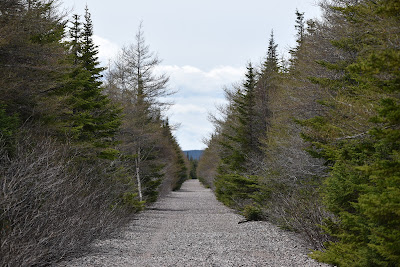 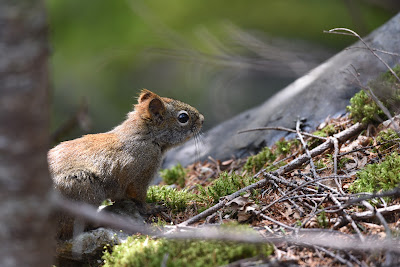 We were surprised and delighted to emerge onto a road and find Berg's Famous Ice cream shop. There was a large line of happy looking people waiting outside, and a huge crowd out back, so we decided it wasn't a piece of local culture we should skip :) Besides, with around 21 km behind us, we were ready for a break. 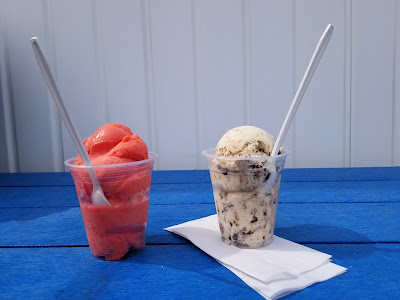 As we entered Conception Bay South the trail became much more developed again, and there was a corresponding increase in people out enjoying it. As we trekked along the tree-lined trail we were stunned to peak through the trees and get a crystal clear view of Bell Island out in the Bay. We had made it across the Avalon Peninsula! 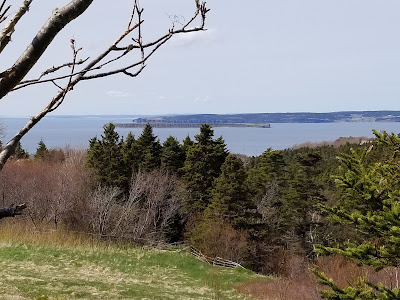 One of the highlights of the afternoon was crossing the Manuels River. We crossed a bridge over a deep canyon, which gave a wonderful view of a waterfall down the shallow, rocky, river bed. The rocks in the riverbed far below apparently hold an abundance of trilobite fossils, but we didn't investigate ourselves. We were very encouraged to see lots of children playing and exploring in the water far below. 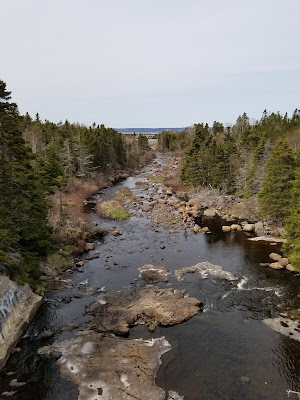 Eventually the trail turned and brought us out onto the shores of Conception Bay. Here we were in for another treat. In addition to a spectacular view of Bell Island, there were not one but two icebergs floating in the bay! We stopped for a break on the shore, and spent a few minutes enjoying the view, finding cool natural patterns on the beach, and dipping our fingers in the Atlantic. 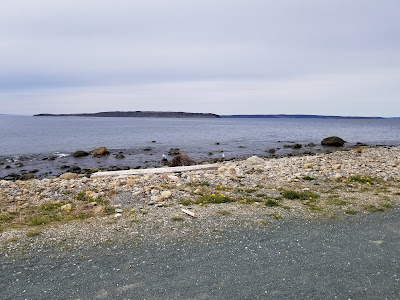 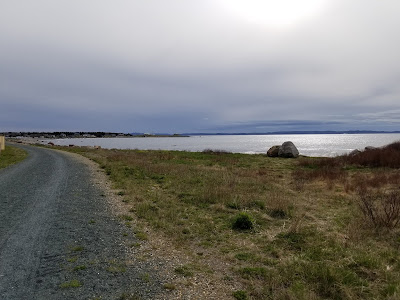 By this point we had walked nearly 30 km and it was going on 5 PM, so we decided to turn our thoughts towards finding a spot to stop for the night. It was a glorious first day on the trail, and we feel extremely lucky! 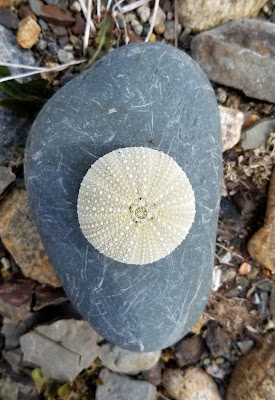 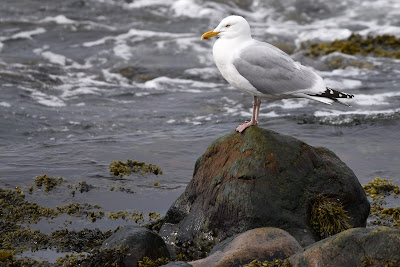 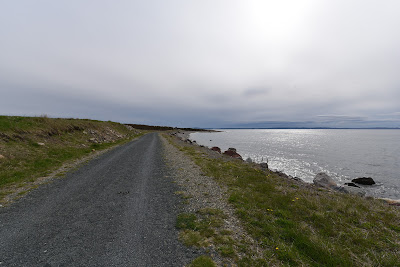 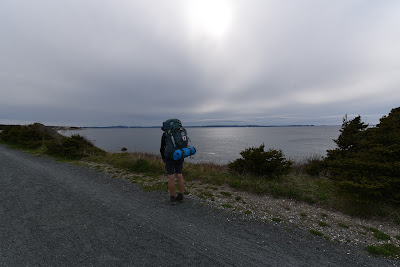