** We apologize for the delay in getting some of these daily journals and content up.  Please note that we have now uploaded notes and pictures from June 12th on wards until this entry, and so if you are interested in reading about our whole adventure  there may still be entries which you have not seen!  Be sure to check them out at Come Walk With Us! **


We woke up this morning to the sounds of the Trans Canada highway and a chorus of bird song. I counted 15 species as I lay there putting off getting up out of my warm cozy sleeping bag to make the coffee.

We had a leisurely morning knowing that we had a short day a head of us, and so set off down the trail around 8:30 am. We were on a beautiful stretch of trail, surrounded by beautiful barrens and bogs. 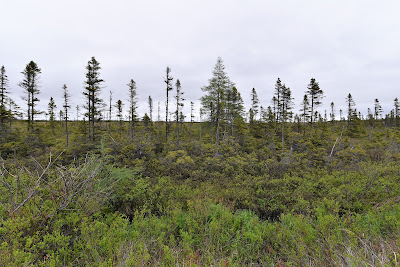 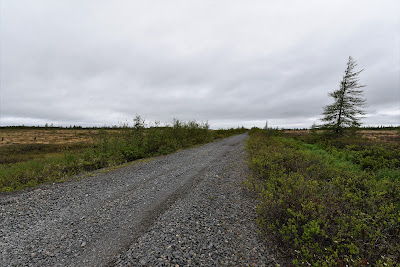 There was quite a lot of ATV traffic on the trail yesterday afternoon and this morning, making us glad that the people who live here take full advantage of the beauty and nature that exists just 15 km outside of town. Once again, we were very grateful to the ATV drivers for slowing down as they passed us, and for stopping with good natured questions like "Where are you and the missus leggin' it to?" 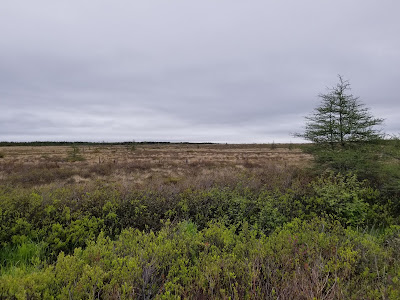 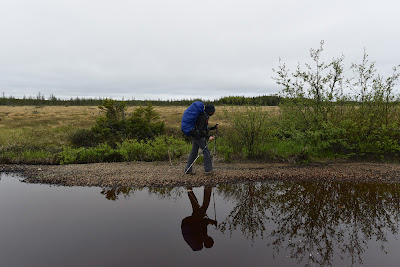 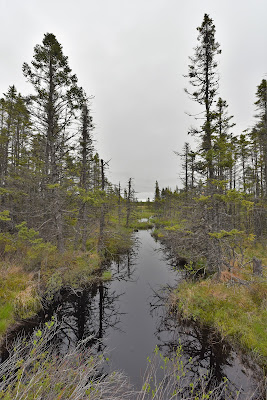 The blackflies weren't too bad this morning, so we made a few stops in order to photograph Yellow Warblers in the act of nest building. 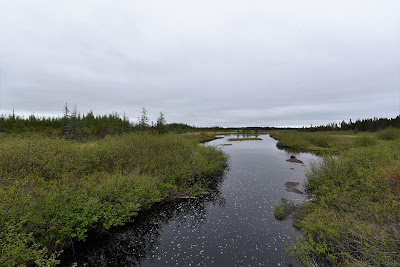 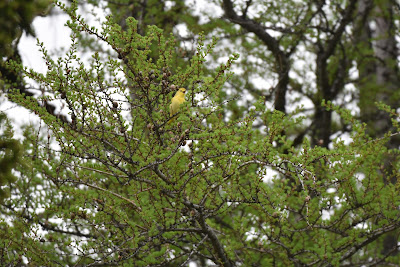 We saw several pairs in the dense shrubs on the edges of rivers, which is perfect nesting habitat for this species.   It was one of those days where there was just no photo love though. We did however enjoy the sights and sounds of several very beautiful rivers. 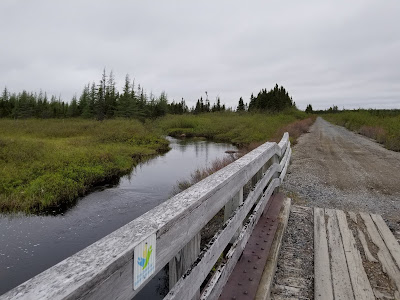 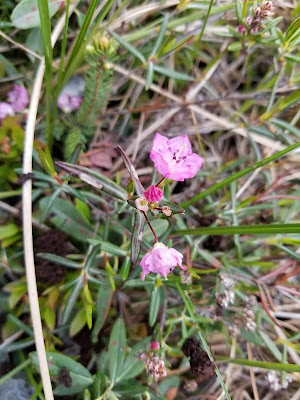 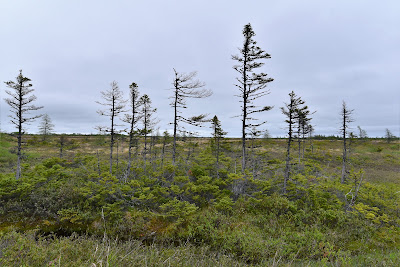 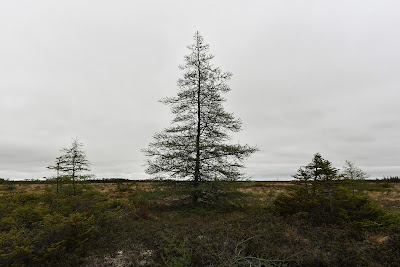 A few kilometres outside of town we passed a memorial to the people who died, survived, and helped out in the Czechoslovakian Airline crash in 1967 that happened at that spot. At first it seemed out of place to see a historical plaque seemingly on the middle of the barrens, but when we stopped to read what it was for, it was a powerful and thought provoking reminder. 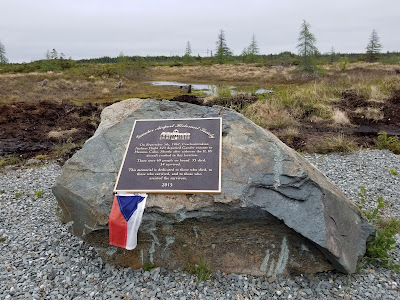 The town of Gander, NL has definitely been shaped by aviation. We saw further signs of this as we walked through 'Old Gander', which is an abandoned town and historical site located beside the Gander International Airport. Between 1934 and 1954 Gander went from being an empty barrens to one of the largest and busiest aerodromes in North America. Flights ran between the US, Europe, and the Middle East, bringing the world to Gander. The people who built the airport and town were ordinary Newfoundlanders, and many of them lived in Hatties Camp, or Old Gander. Today you can walk through the remains of this community, look at the foundations, and read about the people who lived there, where they worked, and what life was like. 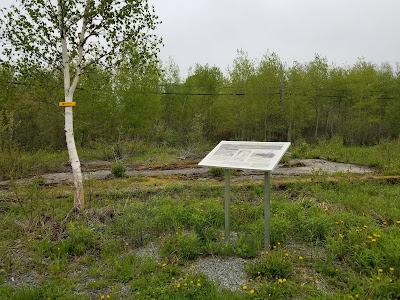 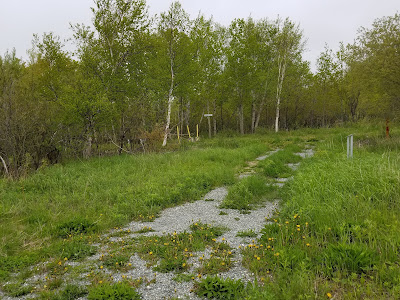 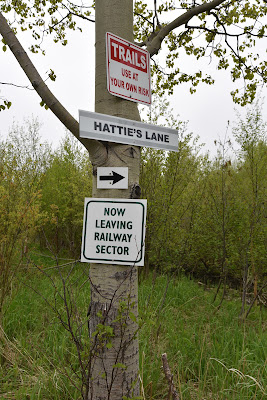 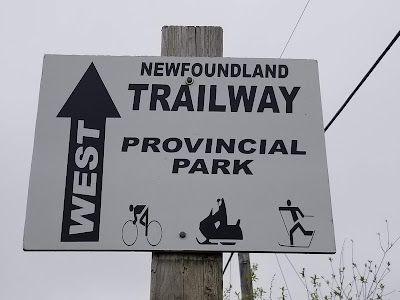 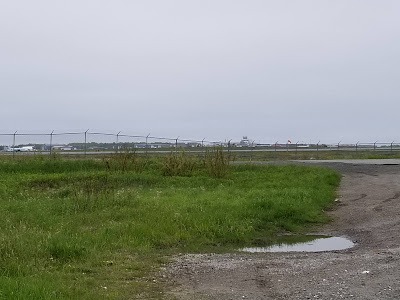 On the outskirts of town we were delighted to find Rosie's Cafe and Restaurant, which was located right on the side of the Great Trail. This was a busy place with a bakery filled with cookies, pies, squares, and bread at the front and a restaurant at the back. On the wall of the restaurant, which was filled with locals having lunch, we saw a poster for the film "Come From Away", about the role Newfoundland families in Gander and the surrounding communities played in helping passengers stranded during the 9-11 attacks in the US. The people of this province have strong traditions of self reliance and community spirit, and their capacity for kindness never fails to surprise and humble.

At Rosie's we treated ourselves to a small tray of Partidgeberry squares. Partidgeberries (internationally known as Lingonberries) are native to the Boreal and Arctic Tundra, and are used in pies, jams, scones, and other baked goods across Newfoundland and Labrador. Their taste is reminiscent of cranberries, and they are delicious! 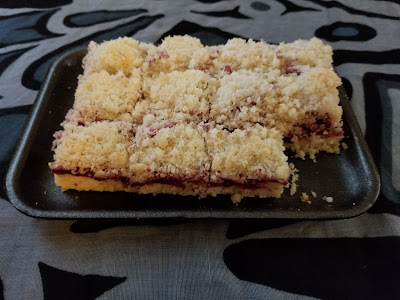 It was a short walk in to town today, but we are spending some time here to resupply, repair, wash and dry our things out. We are both ready for the break, and excited to see what we will find in this interesting town where avian  history and the T'Railway Trail seem to play such an important role.