When I opened the tent this morning my first thought was, gross everything is absolutely soaking wet from the dew. As I looked up, my second thought was, Oh wow! The sun was up and creating perfect reflections on the river beside our tent, and a little farther down, where the river rounded a bend, it was lighting up a golden mist. As I sat on a rock heating the water for our morning coffee and oatmeal I couldn't think of a better place to be at that moment. 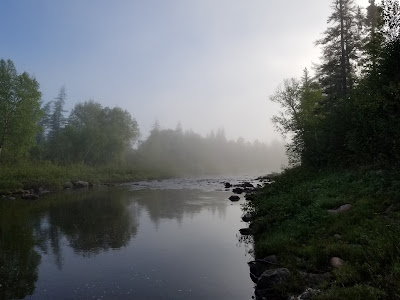 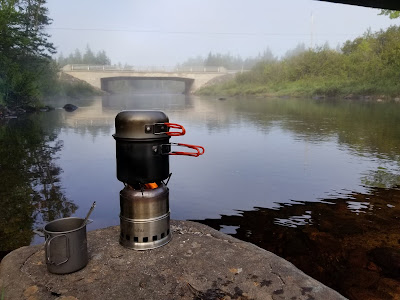 We had a bit of a slow start, because we tried to dry out tent and tarp a little in the morning sunshine before heading out. When we finally go going we were lucky enough to have a fantastic wildlife day! 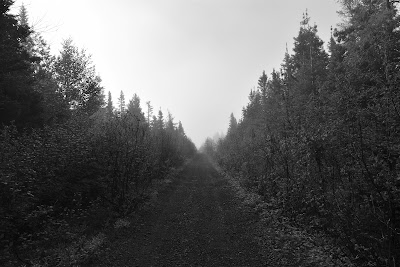 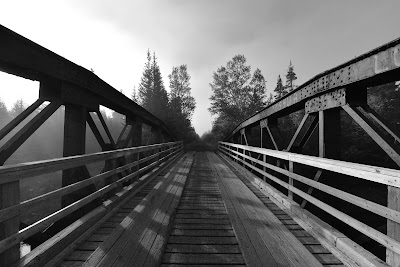 It began about 3 km down the trail, when we rounded a bend to hear two pairs of Greater Yellowlegs yelling and screaming from the treetops on either side of the trail. The path ran between two small lakes, and there seemed to Yellowlegs everywhere! We were astonished to see these long-legged shorebirds perched on top of the spruce trees. 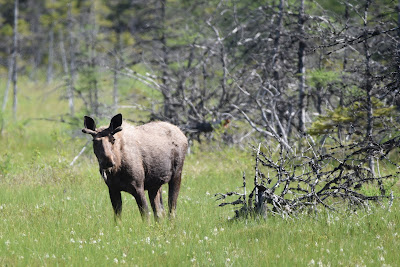 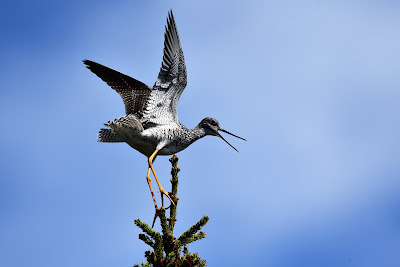 As we were investigating what all the fuss was about, Sean looked over and saw a moose!!! It was s very healthy, handsome looking male, hanging around in the swamp munching on vegetation. We watched it for a while until he decided to saunter off onto the trees. What an exciting moment! 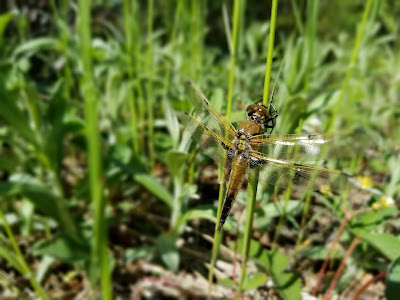 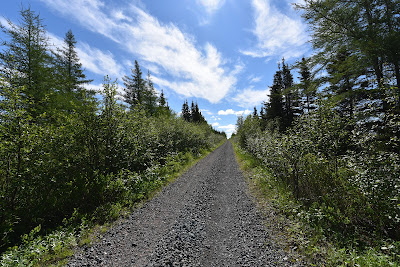 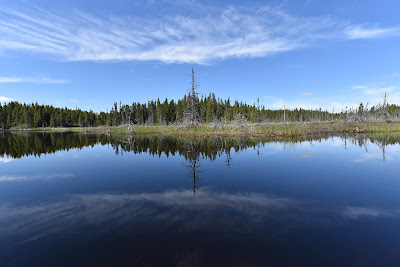 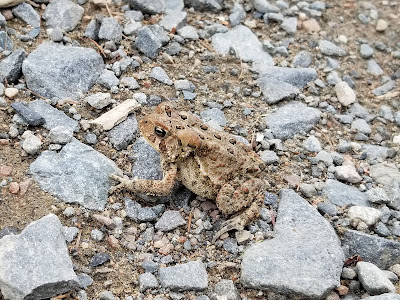 Apart from that we saw many different kinds of dragonflies, and an American toad. 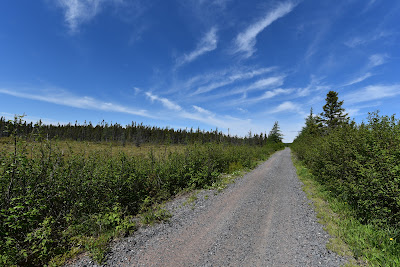 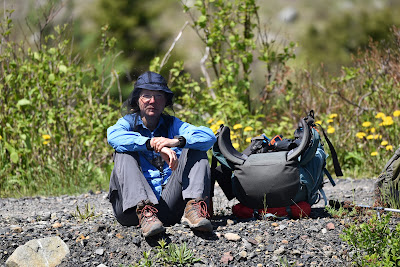 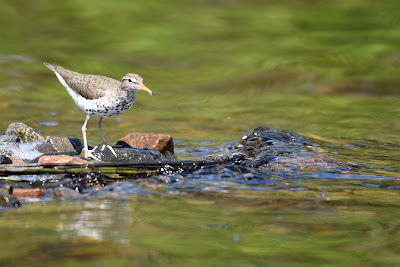 While taking a short break we also found thousands of tiny black tadpoles swimming about in the shallows of a lake, and were lucky enough to watch a Spotted Sandpiper picking its way along the rocky shore and doing its signature tail wag. 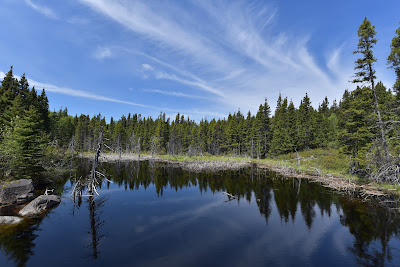 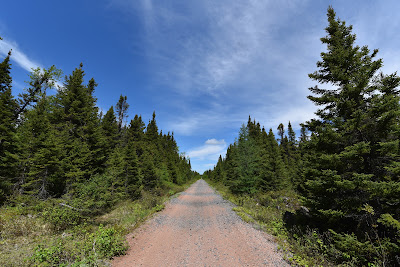 We passed several lakes with cottages, and were passed by a number of ATV riders. A few stopped to chat and ask us how far we were walking. When we got to Indian Arm we found a fun surprise - a new kind of frog, called the Indian Arm Frog! 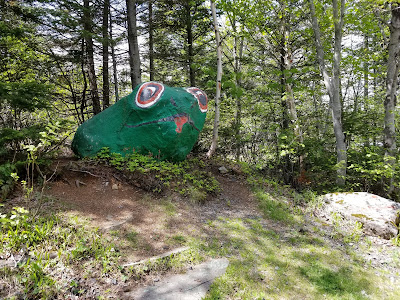 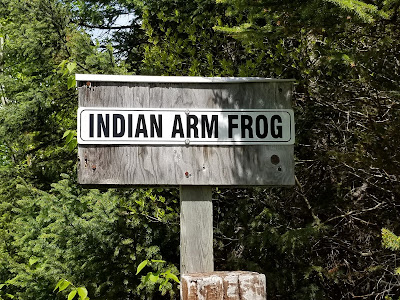 During the late morning we reached Notre Dame Junction, which was a community of cottages and RV's. The signs at the junction suggested every amenity possible was available 12 km down the trail in Lewisporte. Sadly, we were not going to Lewisport, and we hadn't covered enough distance to stop in the clean, well-maintained, and very appealing looking warm-up shack. 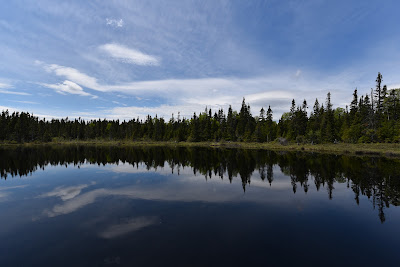 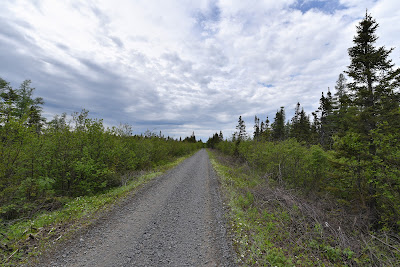 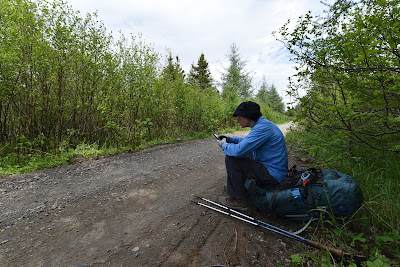 On the way out of Notre Dame Junction we passed through a community of RVs, collected on the side of the trail. Just after this we crossed a busy road and found ourselves walking out of the forest and into a stretch of wide open barrens. It still amazes us how quickly the landscape here can change. 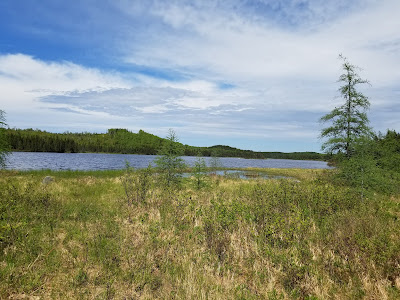 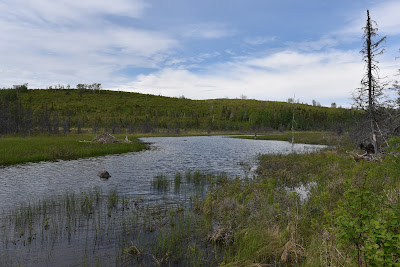 The afternoon was sunny and very hot, so we decided to look for a spot to camp before reaching Norris Arm lake. This lake is very long, and we anticipate a lot of cottages and few camping spots. We found a perfect little grassy spot tucked off the side of the trail near a lake. There are three beaver day on the lake, so we decided to filter our water, put an Aqua tab in it, and boil it just to be on the safe side. 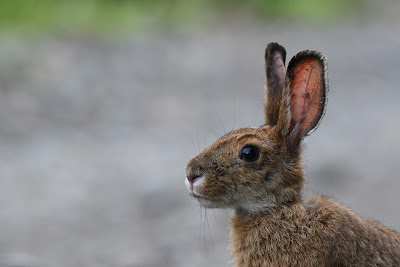 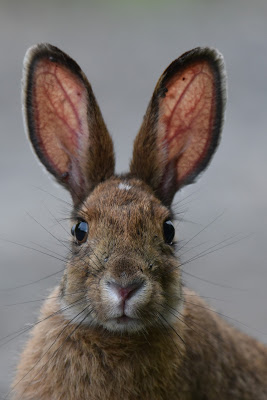 After dinner, while cleaning up we were fortunate to be visited by a family of rabbits hoping down the trail  - unfortunately several of them had a number of ticks.

As the daylight fades, and the night sets in we are laying here listening to the winnowing of Wilson's Snipes, the haunting calls of Common Loons, and a seemingly endless variety of different sounds produced by a pair of Common Ravens.