For most of last night there was a torrential downpour, and it continued until around 9 AM. We made breakfast and packed up inside the tent, but waited until the worst was past before taking down the tent and setting out. 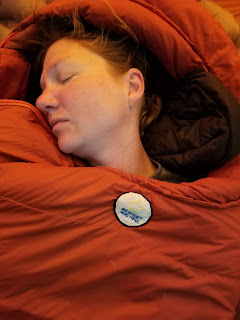 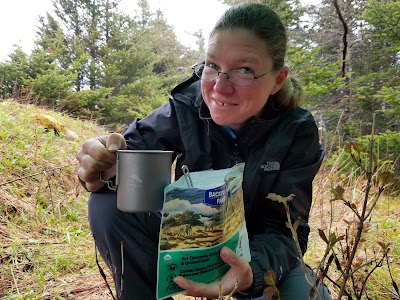 When we stepped onto the trail we saw a forested world shrouded in mist that could have been the backdrop of Bilbo Baggin's adventures in Middle Earth. It was magical, and only the first of many scenes that prompted an "Oh, wow!" 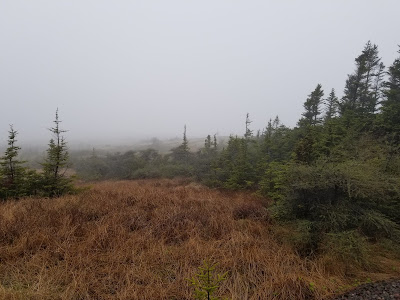 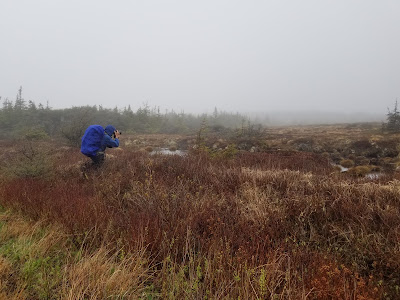 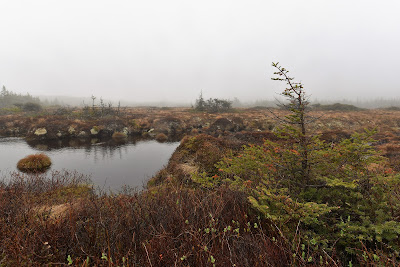 Today we began heading up north, along the isthmus between the Avalon Peninsula and the main part of "The Rock." As we set out, the landscape changed almost immediately. We entered rolling hills covered in heath and grasses, and interspersed with large rocky crags and small stands of conifers. In the background were tall "mountains," and in the foreground winding rivers and small lakes. The landscape could have come out of a Group of Seven painting. 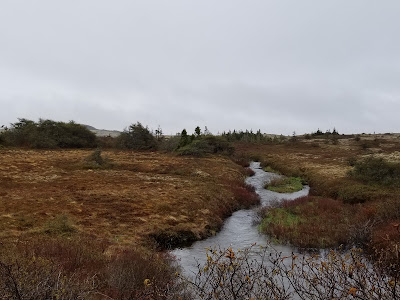 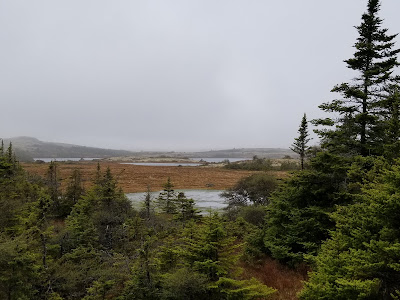 With the change in landscape came a change in the variety of birds we saw. We heard lots of Wood Thrush, which for someone used to seeing this species in the hardwood forests of Ontario seemed strangely out of place. We also saw nearly ten Canada Jays, many Wilson Warblers, a Pine Grosbeak, lots of American Robins, and four Scaup. 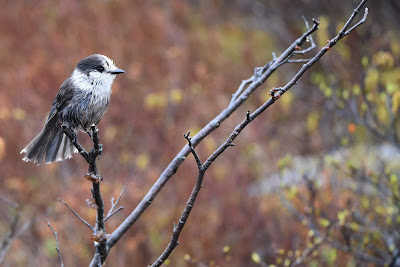 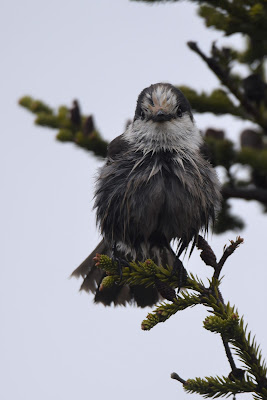 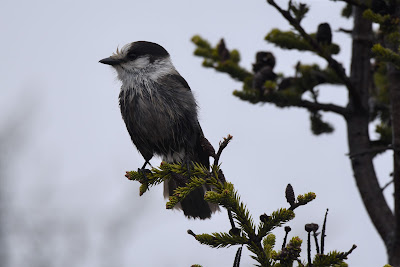 In addition, we were continually surprised by quite a few large brown rabbits running across the trail and then pretending to be invisible, which was quite entertaining. 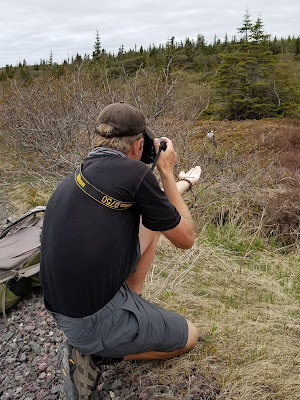 During the first part of our hike we passed quite a few cabins. Some of these were wooden cabins, some were high end RVs, some were shacks in various stages of decay, and many were old school buses. Some of the school buses had additions attached, others were brightly coloured, and a few were quite creepy.

For the second part of the day we were alone in the beautiful landscape. This was a first on this trip. Up until now there has usually been cabins on quite a few of the lakes we walk by, we are typically passed by quite a few ATVs, and we have mostly been within earshot of the Trans Canada Highway. Today there was a long stretch when birds and the crunching of our footsteps on the gravel were the only sounds we could hear.  At one point a flock of Canada Geese flew over, and the sound of their honking seemed to echoed across the whole landscape. 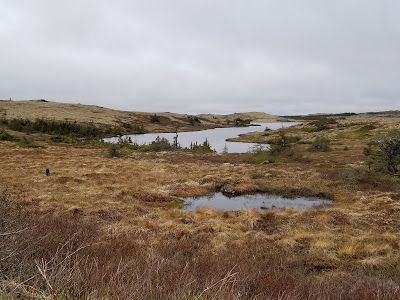 All day Sean attempted to photograph the various birds we saw, but due to the rain his lenses were packed away and difficult to extract, so he had limited success. At one point we stopped for a break at a picaresque and bird filled spot and the sun came out, hot and strong. Unfortunately so did the blackflies, but it gave us a nice chance to dry our things out on the side of the trail. 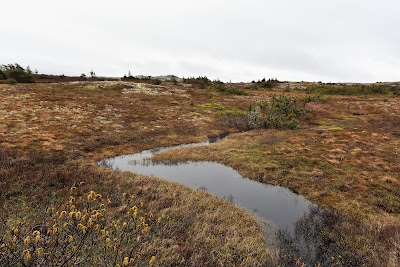 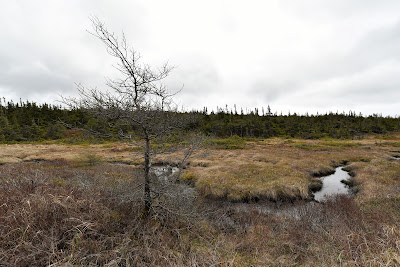 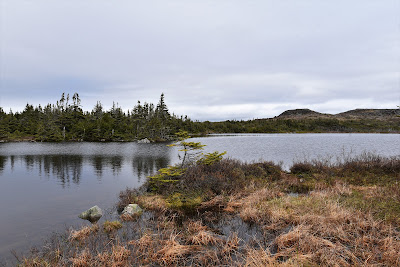 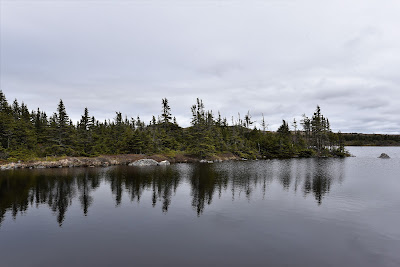 By early afternoon the trail began to climb gradually, and it was easy to imagine the trains of old chugging up and around the gentle curves. We still find quite a few railway spikes on the rail bed as a reminder of the history of this trail. Eventually we found ourselves quite high up, looking down on a panoramic view of Big Gull Lake below us. 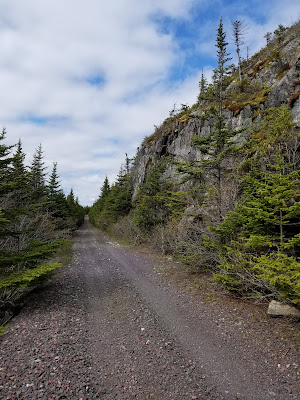 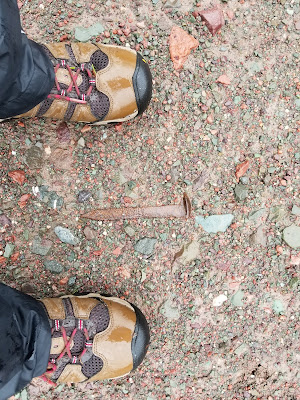 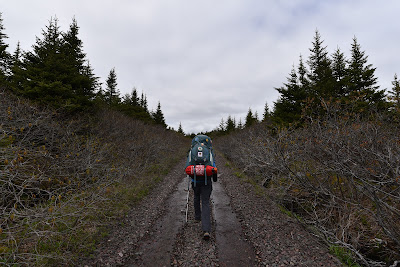 We found a small trail leading down to the lake, and found a wonderful spot on the shore to set up camp. The ground wasn't too level, but we had a million dollar view from our tent. As I write this post I can hear a Wilson's Snipe winnowing above, and a pair of Common Loons dueting on the lake. While could ask for more? 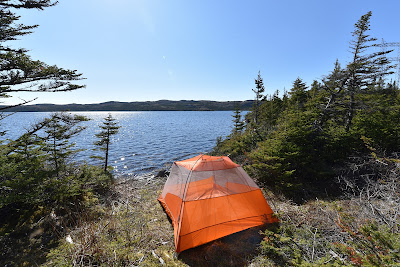 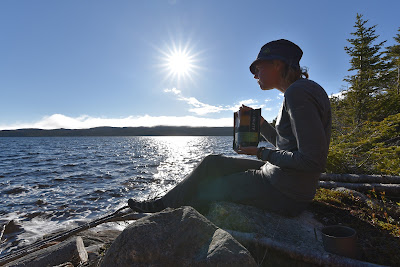 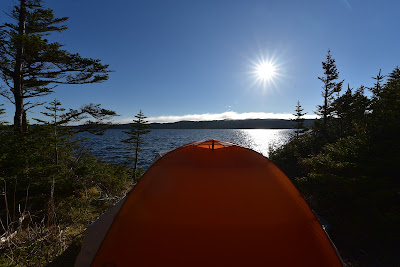