This morning was cold and very wet, but when we opened the tent door around 6:30 am we were greeted with a picture perfect scene. The lake was smooth as glass, providing a mirror image of the hills on the opposite shore, which were aglow with early morning light. The surface was broken by three Common Loons, and a few seconds later their eerie calls echoed across the lake. As we were heating water for our morning coffee and oatmeal a canoe silently appeared around the spit. It was a glorious morning, and very hard to leave our campsite behind. 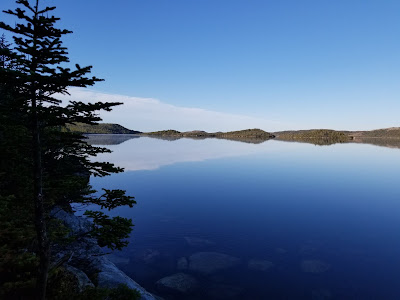 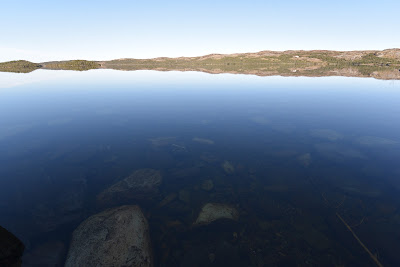 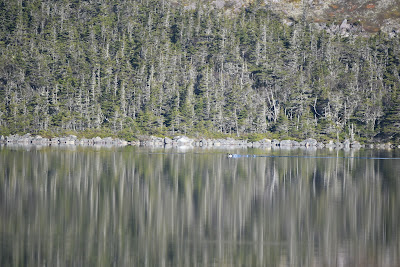 Much of the morning was spent wending between picaresque lakes, open areas, and patches of conifers. 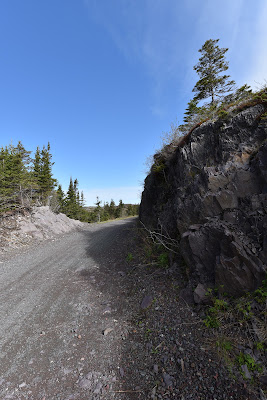 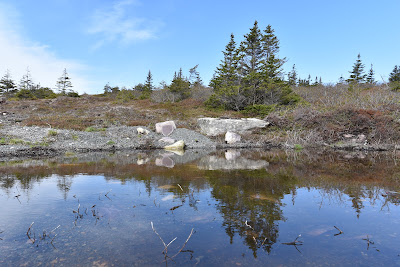 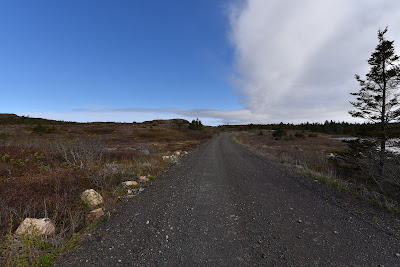 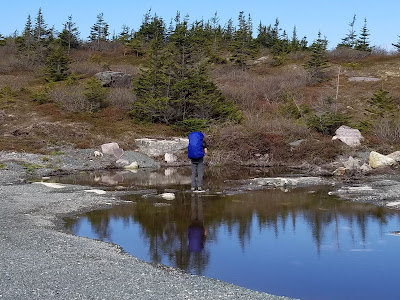 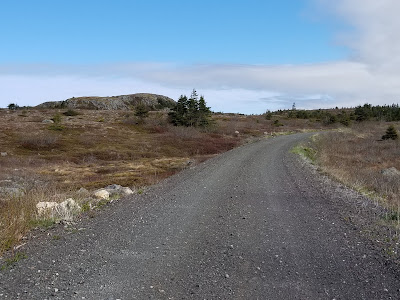 With the return of a more forested landscape in the afternoon, the Yellow-rumped Warblers once again became one of the most abundant species we heard and saw. There was a lot of warbler activity, with high speed chases involving several males and one female going on. 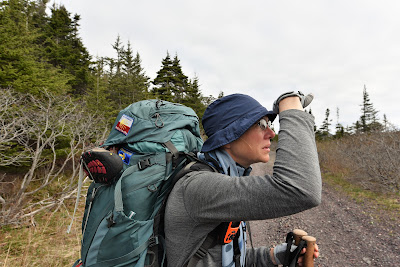 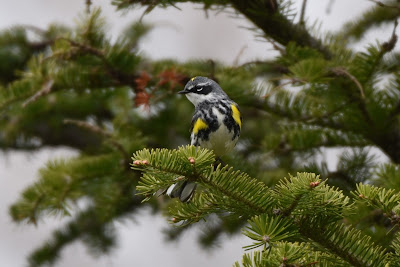 Birding highlights included a close-up view of a Wilson's Warbler pair building a nest in a balsam fir sapling (typically they nest on the ground in the east), watching a group of Yellow-rumped Warblers flying out over a pond to snatch insects off the surface, and a glimpse of a low-flying Bald Eagle that streaked across the trail above us. 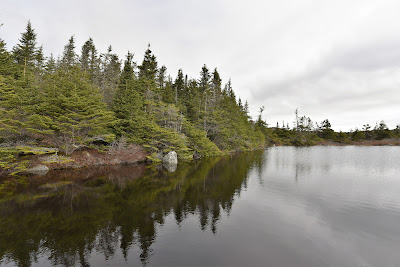 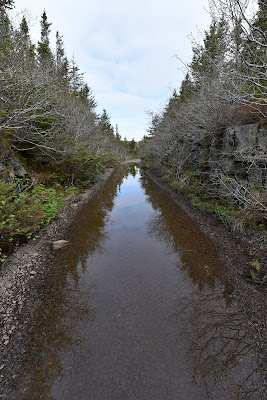 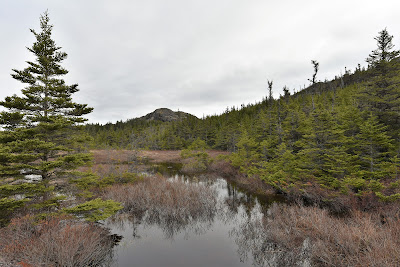 By the afternoon it had become sunny and very warm. We were passed by about 12 ATVs today, all of which slowed down for us and were very nice and friendly. We also walked relatively close to the Trans Canada Highway, so the sights and sounds of civilization were much closer by today. 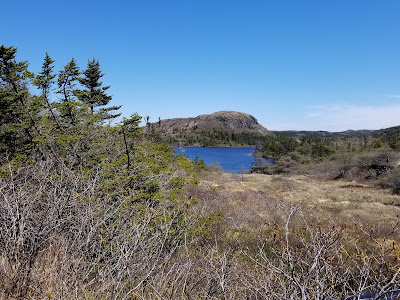 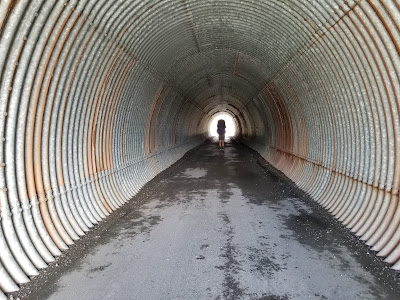 In the afternoon we began climbing again, which provided panoramic views down mist filled valleys. We soon found a number of birds including a Wilson's Warbler, Grey Jay or Canada Jay, Ruby Crowned Kinglet, more Yellow Rumped Warblers and a Grouse on the Trail! 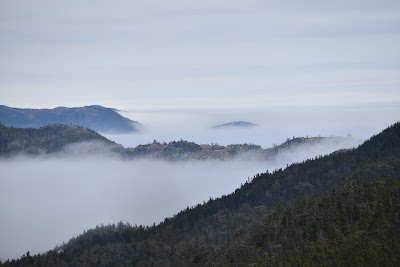 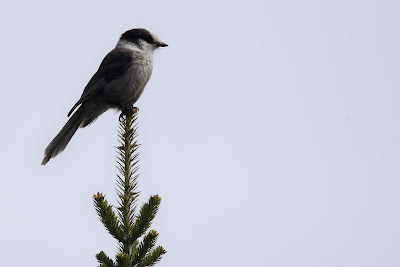 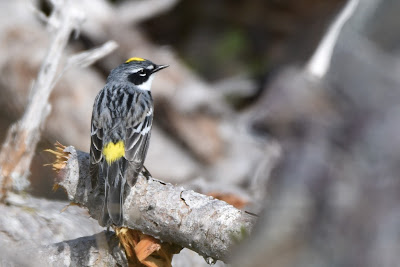 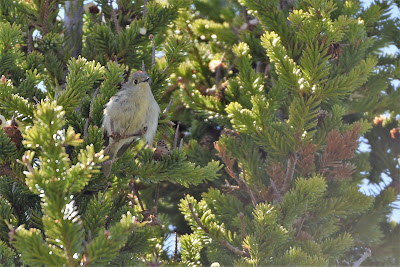 Since we missed resupplying in Whitbourne, we haven't had much food the last few days. As a result we headed off the trail and into the town of Arnold's Cove to visit the Foodland there. 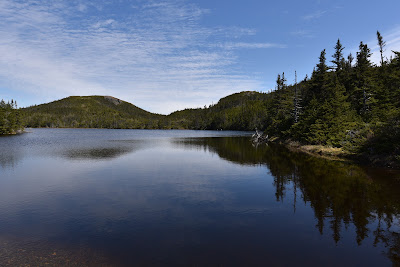 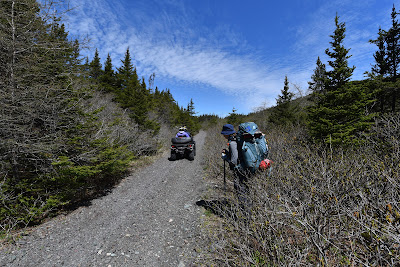 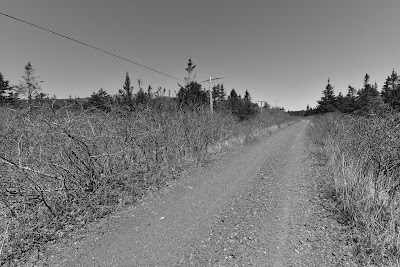 Just outside of town we came to a gravel pit where a group of about 20 young adults was racing ATVs through puddles. They looked like they were having fun, and they were having no detrimental effect on the wetlands, which was nice to see. 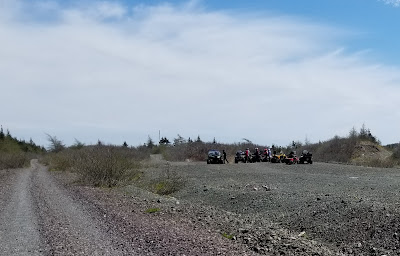 When we got to town we stopped for a much appreciated coffee and sandwich at Robin's outside town. 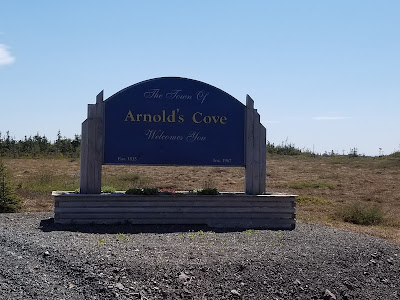 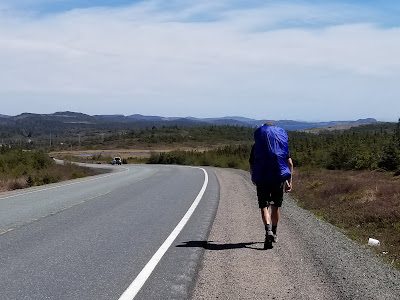 Sean was then offered a lift to the Foodland by very friendly and helpful local, who said he had walked the Trans Canada Highway (HWY 1) to Clarenville in the 1970's to raise money for a liver transplant for someone. Ever since he has been offering hikers rides whenever he sees a lost soul wandering around wondering where the grocery store is.  As a result he also got a tour of the beautiful Arnold's Cove harbour and Bird Sanctuary.  A wonderful Canino-like moment on the Great Trail, and a heartwarming ending to another beautiful day.
Posted by Sonya and Sean at 6:25 AM