We headed out of Gander around 8:30 am in a cool, overcast morning. As we reached the edge of town we passed a memorial to the soldiers of Newfoundland who fell in the World Wars and the Korean Conflict, as well as several parks with sculptures of small aircraft. Further reminders of the military history of this town, and the importance of aviation. 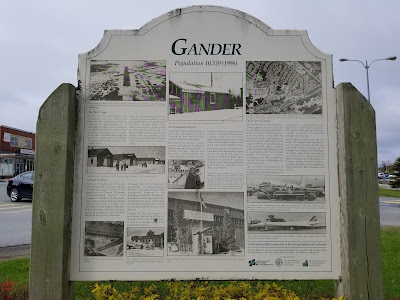 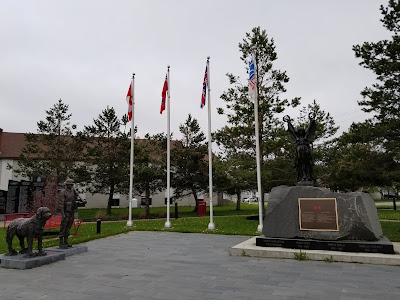 As the trail left the town site we passed through a small park with a sign for the Trans Canada Trail, as well as informational plaques on the various plants and animals we could expect to find along it. The list now includes bears! 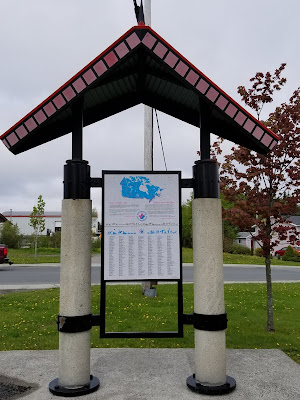 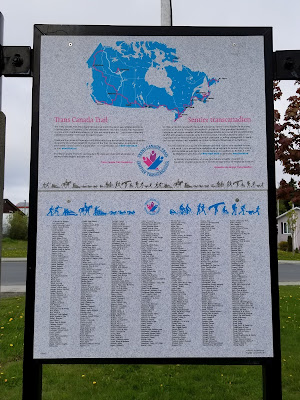 Next we came to a series of trails and boardwalks through Cobb's Pond Rotary Park. This was a gorgeous place, and as we took a detour down to the lake we came across a family of Canada Geese, the babies struggling and peeping in the heath as they made a mad dash to escape, as well as a pair of Ring-billed Ducks out on the pond. 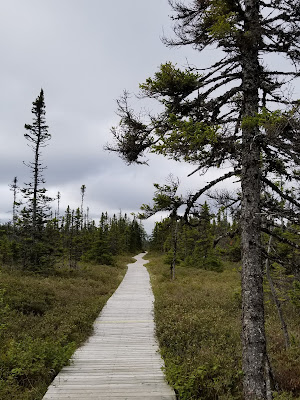 Just minutes from the houses and park we found ourselves back out on the wild Boreal barrens, surrounded by open bog, interspersed with small clumps of trees and small lakes. It once again amazed us that so much beauty could exist so close to town! 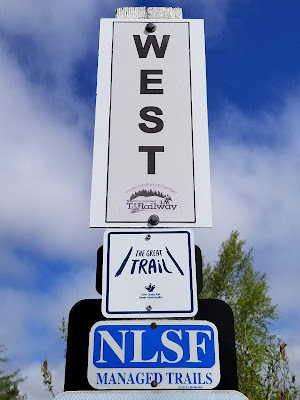 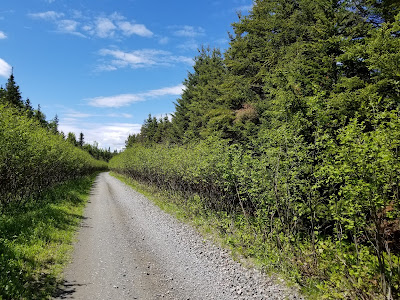 For most of the morning after that we walked through forest that was six of white and black spruce, tamarack, birch, and alder. There were lots of American Robins, Ruby-crowned Kinglets, Black-throated Green Warblers, American Redstarts, and Black-capped Chickadees. A particular highlight was a Yellow-bellied Sapsucker that was hanging out in a stand of young alder only a few feet from the trail. Sadly he scarpered before we could capture an image of his handsome black and white plumage, and his bright red bib and cap.

Another highlight of this morning was hearing the call of a Northern Leopard Frog. Until the past few days we haven't seen or heard many amphibians, but on the way in to Gander we noted 14 dead frogs and toads on the trail, and today we saw a staggering 26 flattened amphibians. It was very nice to hear a live one! 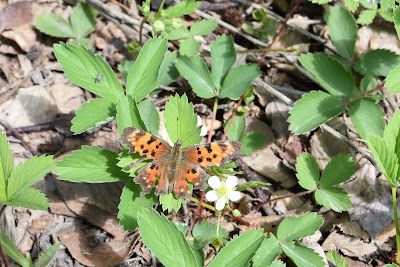 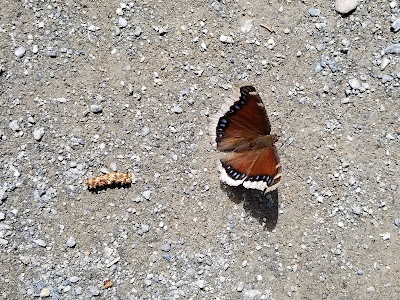 As the sun came out we also started to notice an abundance of butterflies on the trail - especially Canadian Tiger Swallowtails, small blue ones, and a medium sized orange and black variety. Their presence was very cheerful. 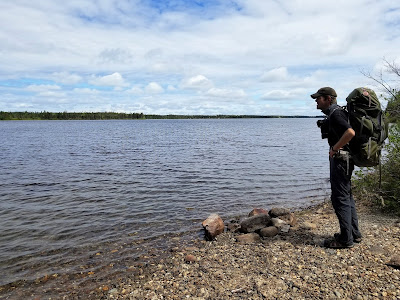 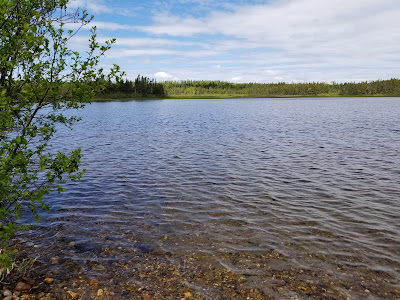 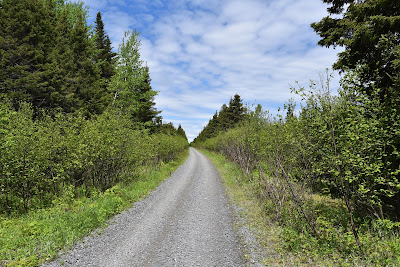 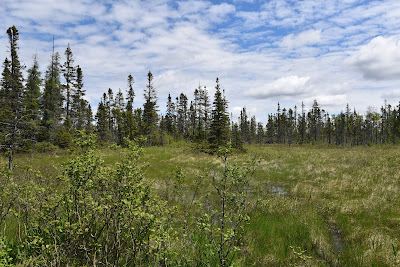 Around noon we came to another warm-up shack for snowmobilers. This one was in fair condition, although it was missing some of the siding and the front door knob, and the walls were beginning to get used for graffiti. We were left grateful and humbled by the dedication and hardworking of volunteers who maintain these places year after year, knowing they will be vandalized, and continually fixing up them regardless. Thank you! 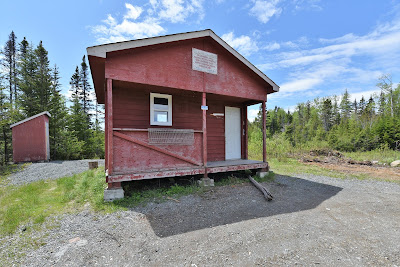 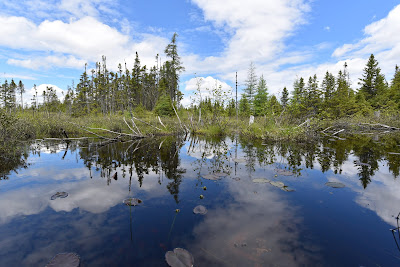 A little farther on we entered the small and prosperous looking community of Appleton. On the trail was evidence of pride in the railway heritage of this town. It was wonderful to see the display, and gave us hope that Newfoundland's history and traditions will get passed on to future generations. 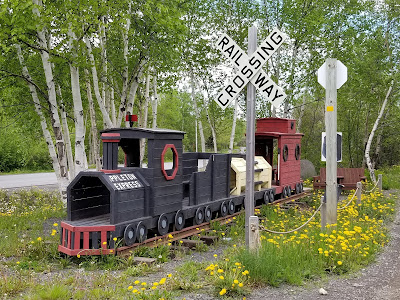 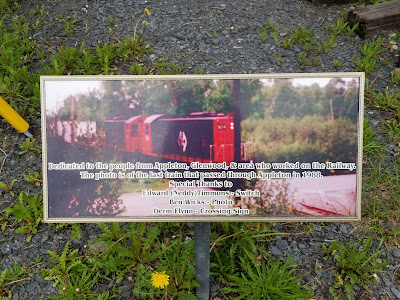 Adjacent to Appleton was the community of Glenwood, where were excited to find Johnny's Convenience Store, which was not only located right on the Great Trail and open, but also offered 24 flavors of soft-serve ice cream! We've seen this offered in a few places across Newfoundland, and have decided that this is a tradition we can get behind :) 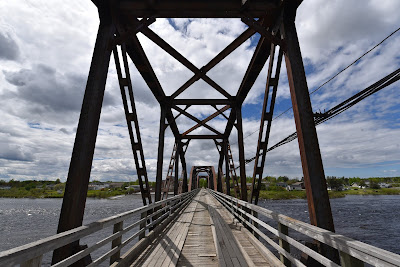 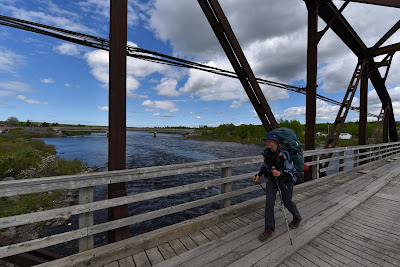 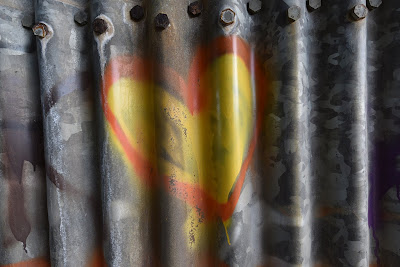 After a short break in Glenwood we continued on around Salmon Pond, which is large enough to count as a lake in my opinion. The blue sky and clear reflections in the rocky lake were very beautiful. 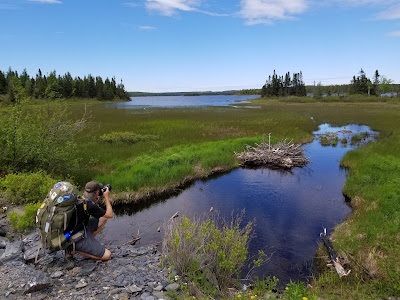 On the far side of the lake, just as the Trail approached the Trans Canada Highway again we came to a trestle bridge over the wide, flat Salmon River. On the side was an old cable car, which must have been used at one time to cross the river. We paused to enjoy the moment of history, and then, because we had walked 28.8 km and didn't see any likely sources of water in the next stretch of trail, we decided to stop for the night. The traffic is loud, but the river is peaceful, and the sun is still shining...and I think I see a geocache in the tree nearby! 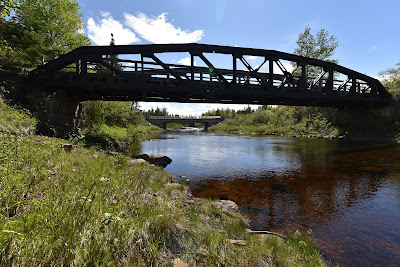 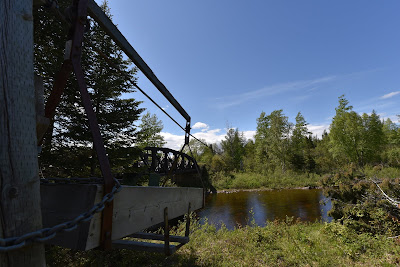 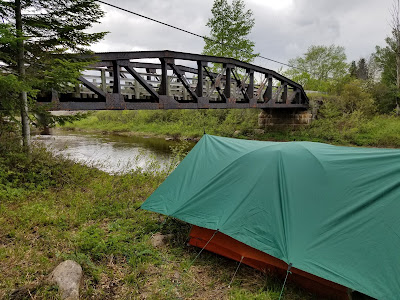 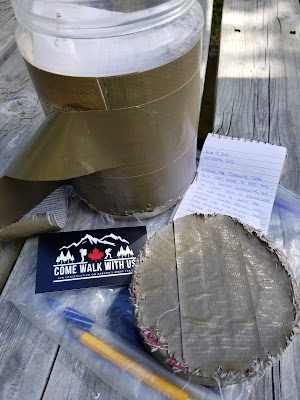