Today arrived amid a mild rain shower, although this didn't seem to dampen the spirits of the Black-throated Green and White-throated Sparrows singing outside the tent, or the Common Loons dueting on the lake.

As we left our campsite behind and crossed under the Trans Canada Highway, the wind died down a bit and the blackflies came out with a vengeance. Although we are doing this hike for birds, and blackflies are an important food source for many insectivores, being food for the bird food isn't a service we necessarily enjoy providing. Taking breaks today was almost impossible, as every time we stopped we were swarmed. 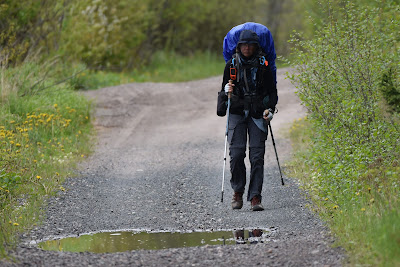 Most of the day we spent walking along the gravel track of the Great Trail, surrounded by trees on both sides. However, today was also a day of waterfalls! The first one we passed was partially hidden by trees, and consisted of a wide, thin, flat sheet of water cascading delicately down the rock.


The second waterfall we passed was much larger, with torrents of water rushing down among the sharp teeth of the shield. 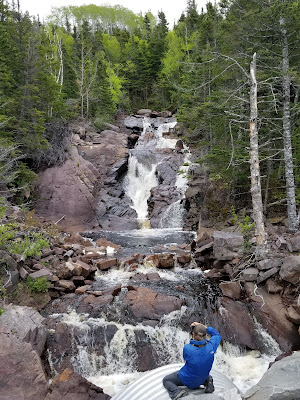 After the second impressive waterfall we walked into Port Blandford. The community began slowly, as a group of large, modern, and well-maintained cottages around a lake. 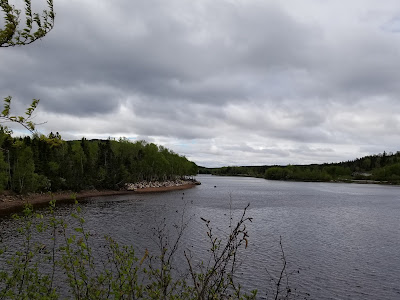 We then crossed a trestle bridge with the old iron sides, and found ourselves in a small picnic area. From there the trail followed along beside the road, through a picaresque community with quite a few houses, a post office, and supposedly a general store (now permanently closed). 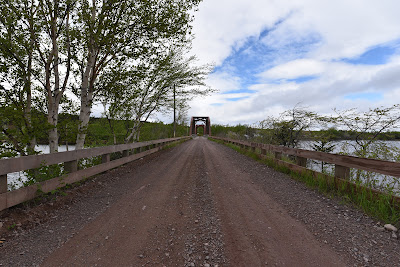 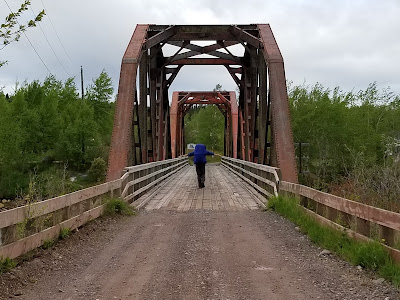 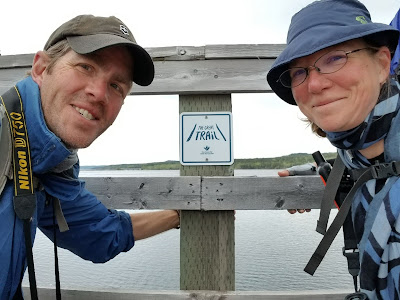 At the far side of town we passed by the site of the old train station. The station burned down in 1978, and the railway in Newfoundland was officially abandoned in 1988 with the construction of the Trans Canada Highway. However, the stations we've passed through in Avondale, Whitbourne, and Port Blandford can still be visited and are kept in pristine condition. This has to be a testament to the importance of the railway in this area, and to the building of Canada. 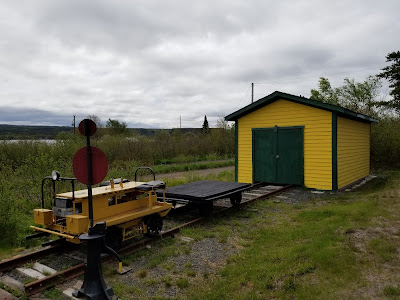 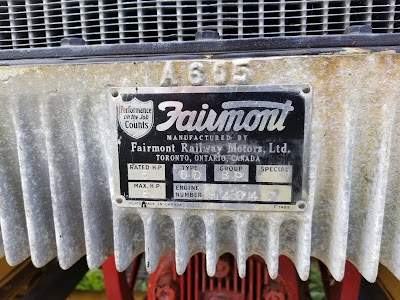 Once out of the main part of town we followed the trail around the lake, enjoying beautiful views of Terra Nova National Park on the other side. As we hiked the shore a pair of immature Bald Eagles swooped low over the trail, circling the lake and making a second pass over us, just above the treetops. 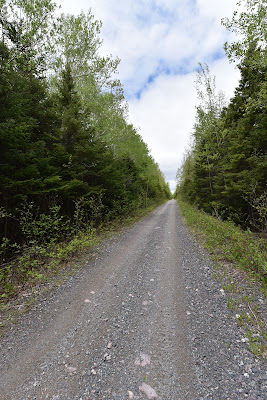 We were also startled by a Spotted Sandpiper as it erupted out of the grasses on the side of the trail and ran down the trail at great speed dragging one wing behind and screaming incessantly. This was a very energetic example of a broken wing display - a tactic used by many ground nesting birds to lure potential predators away from their nests or babies by providing an easy "injured" target. 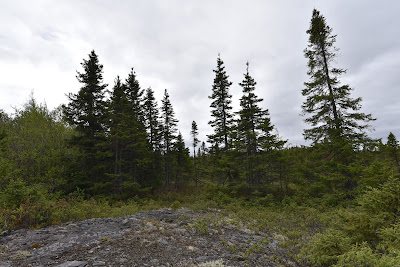 As we headed out of Port Blandford the wind really picked up and the temperatures started to plummet. A quick check of the weather forecast said it would be 2°C tonight with high winds but no rain (apparently we were just imagining the drops falling on us). When we came across a warm-up shack for snowmobilers and ATVers, complete with a picnic table and small woodstove inside it was too much to resist. 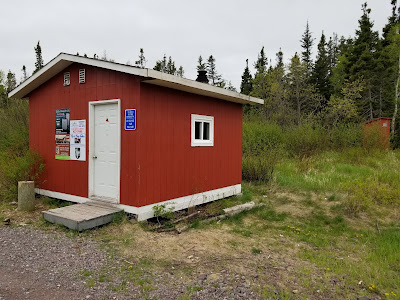 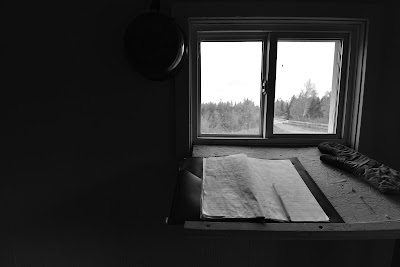 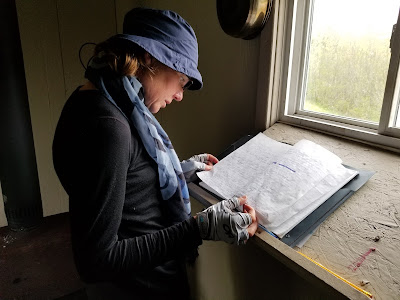 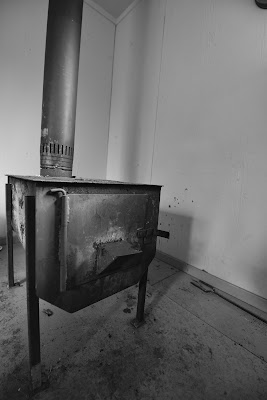 Outside the cabin was our third waterfall of the day - the biggest one yet. Best of all, it gave us access to water. Although we only made it 19 km today, another 6-7 would put us in the middle of Terra Nova, which we think might make wild camping difficult. This opportunity seemed too good to pass up, so we decided to stay. 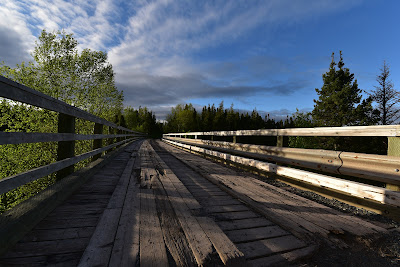 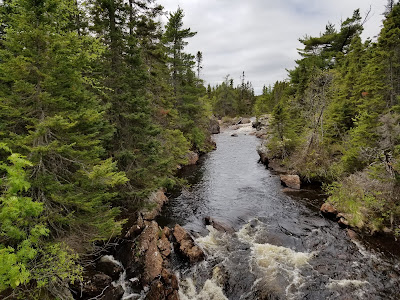 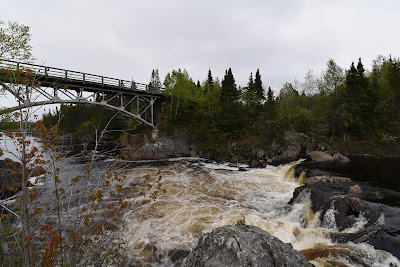 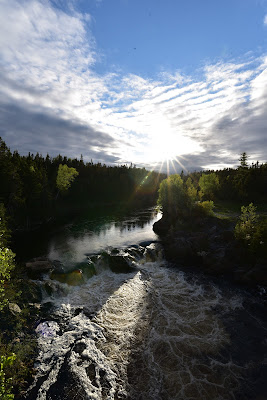 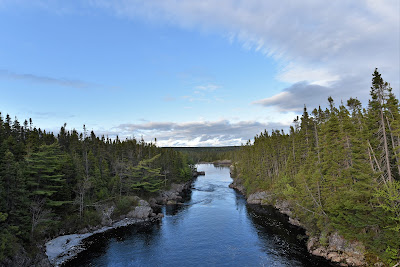 We fell asleep with a very bright quarter moon shining in the cabin window, listening to the crackle of a log in the stove and the quiet, repeated hooting of a Great-horned Owl outside.