Today we reached an exciting milestone - having walked 437.5 km we officially passed the halfway point in our first province. Also, we had a resupply box waiting for us in Grand Falls - Windsor, which makes today feel a little Christmas :)

The day began in a similar manner as much of last night - with torrential rains. We were told that more than 50 mm fell last night, and the swollen streams and rivers, abundant puddles, and general sogginess of ourselves and our belongings today attested to that. We waited out what we hoped was the worst of the inclement weather until around 10 am this morning, but soon discovered there was more in store. Ah well. 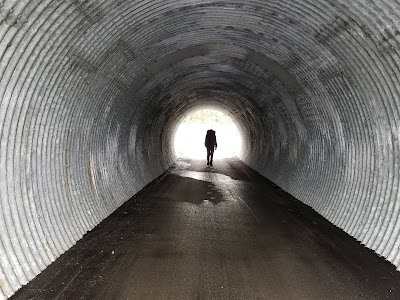 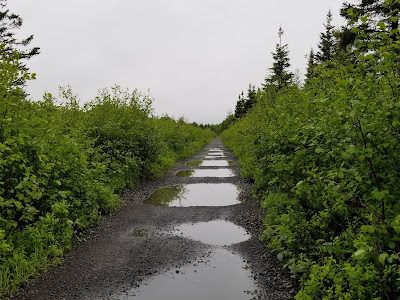 We stopped last night about 9 km outside of downtown Bishop's Falls, so it was a relatively short walk into town, down a puddle strewn trail. 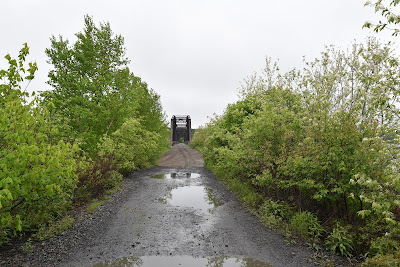 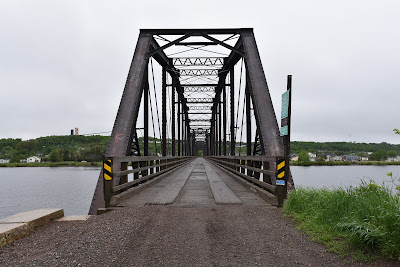 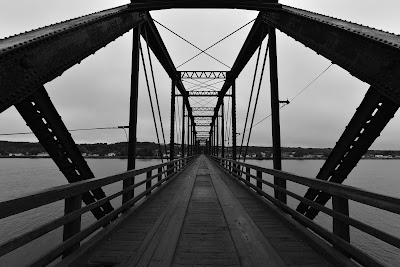 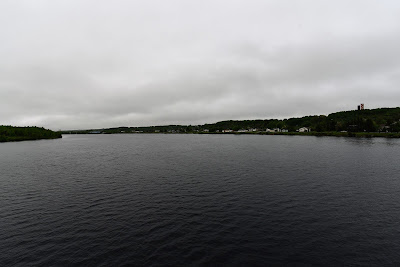 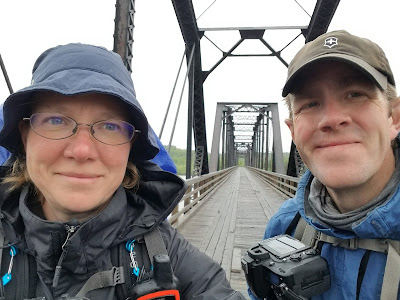 As we approached the town crossed the mighty Exploits River, which is the longest river on the island, and according to local wisdom is the biggest Salmon spawning river in the world. It is spanned by the longest trestle bridge in Newfoundland, which is almost 300 m across. As we stopped to admire the view, the bridge, and the river a friendly local passed us and stopped for a chat. 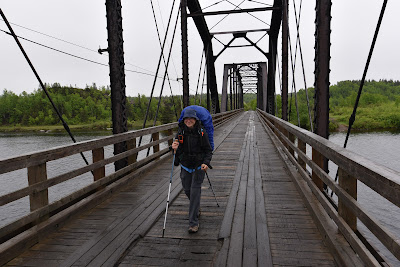 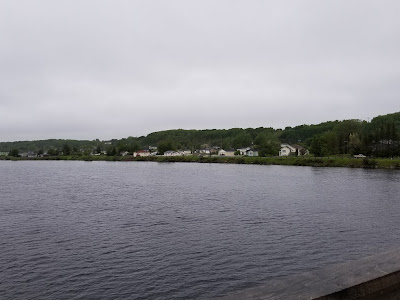 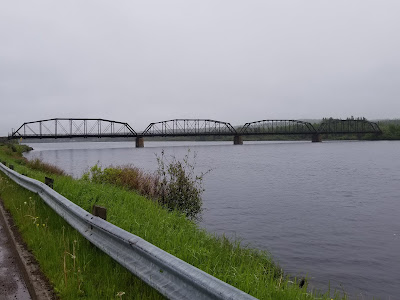 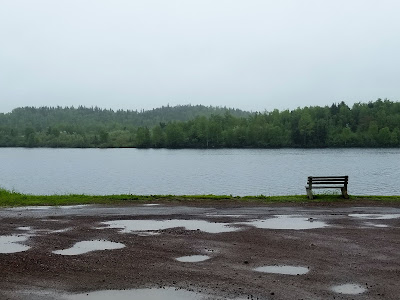 On the far side of the bridge the trail took along the waterfront, past a row of houses which had a fantastic view of the bridge. At one place a man was out landscaping his yard, and he mentioned that at times the bridge was lit up with over 10,000 lights. That would be quite a sight! 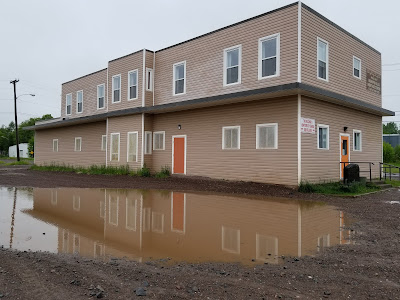 At the far end of town we passed by the old CN rail station. Although the station itself looked like it might have seen better days, it was still easy to imagine trains arriving and people getting on and off. The railway cars out front were a colourful reminder of how important the railway once was to this town. 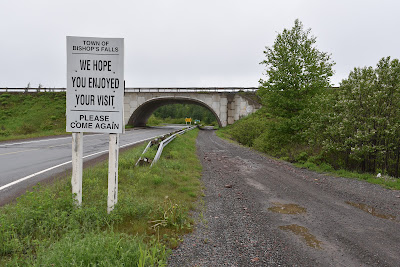 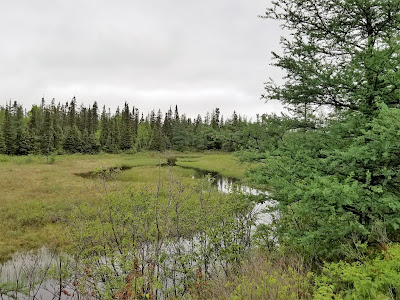 After Bishop's Falls the trail widened out, as though it might have been a rail yard with multiple tracks. Although we were never far from the road or town, the trail stayed a green bordered corridor, and we passed some beautiful small ponds and lakes, which were surrounded by blooming pink Rhoda bushes, and presented almost perfect reflections in the still air. 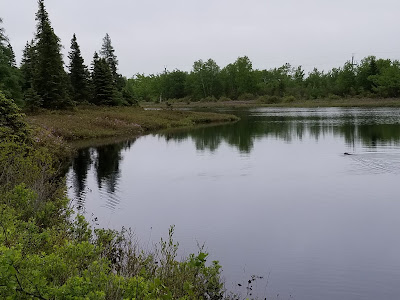 At one such pond we came across a beaver, busily swimming along. He came right up to the edge of the trail to check us out before heading off along the shore. 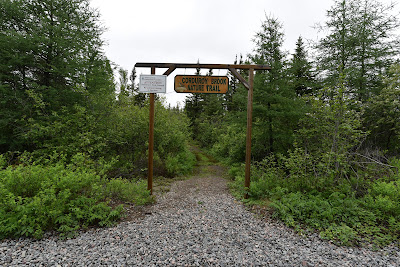 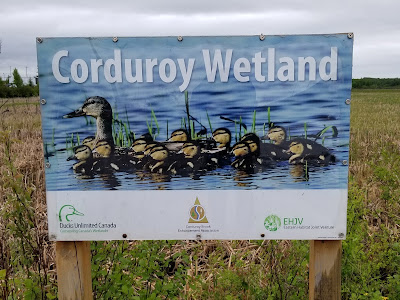 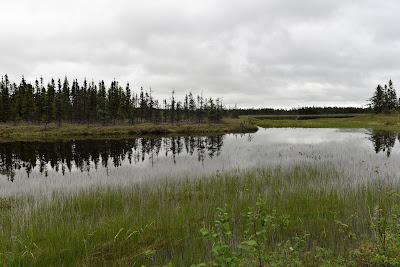 As we approached the outskirts of Grand Falls - Windsor we came upon the Corduroy Nature Trail system. The gateways to the various trails looked very inviting, like adventure was calling just around the corner. This trail system also featured a beautiful boardwalk and viewing platform out in a marsh. As we passed by we saw four Ring-billed Ducks diving in the still water. 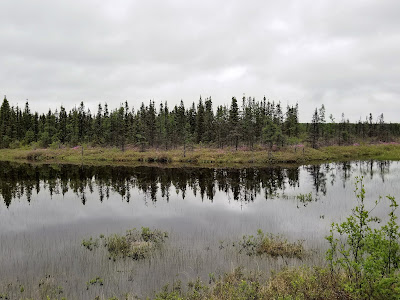 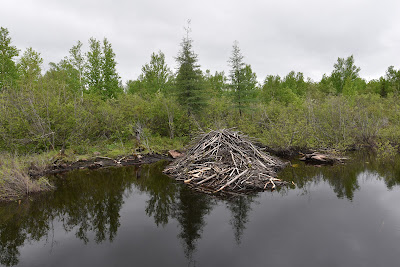 Just as we reached the edge of town it began to rain, and as though St. Roch was looking out for us, Sean looked up and recognized the back of a drive-thru for Tim Horton's just off the side of the trail. We gratefully ducked inside for a coffee just as the heavens opened up and the world turned white with falling water. Phew.


As we waited out the deluge, a man sitting at an adjacent table asked us where we were going. When we explained our story, he mentioned that he had walked a section of the Great Trail with John Davidson a few years ago. John walked across Canada to raise money to start a medical clinic for Duchene Muscular Dystrophy, which his son died of, and he managed to raise $2 million, which is now a $10 million endowment. It was very encouraging to hear about the impact one person could have by making a journey like ours. Food for thought and something to strive for. 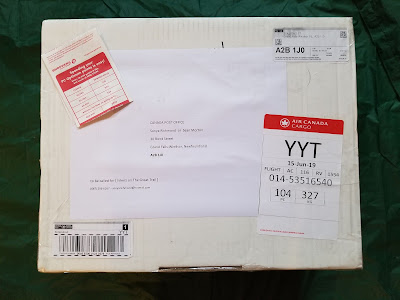 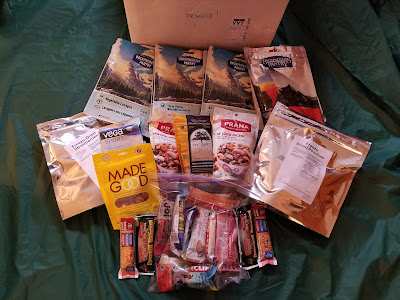 When we got in to town we headed straight for the post office to pick up a much anticipated resupply box. We also took the opportunity to pick up a few additional supplies, as this is the last large town we pass through before heading into a 106 km stretch in the center of the province with no resupply points. Opening the box felt like Christmas! My parents generously donated a good supply of Backpacker's Pantry meals, which are a nice change from rice and beans. There was also a very generous supply of trail mix and a variety of granola bars to change up our usual flavors. Such goodies - we are blessed!

This afternoon the rain has continued, but overall we count it a good day.  After all it wouldn't be any fun if the sun shined every day...