Millertown Junction to Quarry and our approach to the Topsails!

As we were packing up this morning, we watched as two beavers swam along the shore, leaving a soft rippling wake in the smooth, glass-like surface of the lake. The sun was up in a bright blue sky, and the perfect tranquility of the morning was broken only by close to one billion black-flies. If nothing else, they certainly sped up our departure. 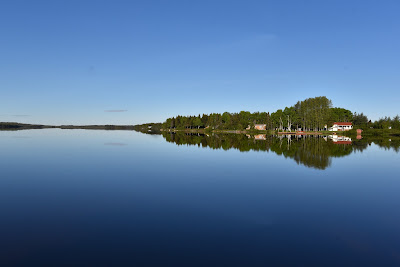 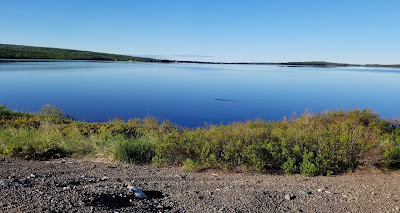 Luckily, as we headed down the trail we seemed to leave some of the swarms behind, and to our delight the trail conditions today were much friendlier to hikers! 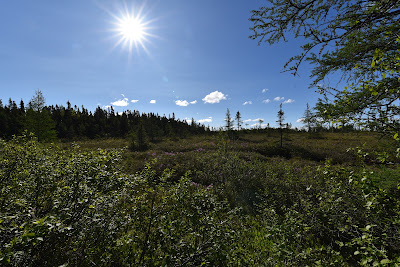 Today we are heading into one of the most remote and wild sections of trail in Newfoundland noted for its landscape as well as it variety of wildlife. The trail leaves the Trans Canada Highway, and doesn't visit any major settlements for the next 80 km. It is possible to see moose, caribou, and black bears on the open landscape. As we cross we will pass several geological formations known as 'the sails' or 'the topsails' which jut up out of the landscape. This stretch is also considered to be one of the most beautiful landscapes along The Great Trail and includes the highest point on the historical train line and now T'Railway Trail in Newfoundland!  It is a great irony - given that the construction of the trail line throughout this stretch was considered a mistake which would come to define much of the province's railway history - that it has now enabled people to access this beautiful and remote landscape.

Almost immediately after leaving Millertown Junction we found ourselves in a different and stunningly beautiful landscape. On either side of the trail the view opened up to show expansive wet meadows and marshes interspersed with small ponds and rivers and dotted with light colored erratic. Today was sunny and warm with no breeze, so the pools of water reflected the sky, trees, rocks, and marsh grasses back perfectly. 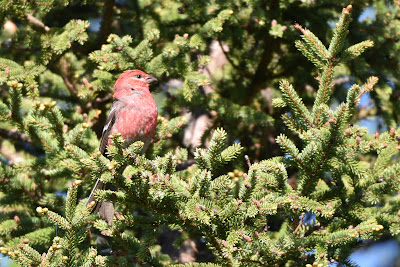 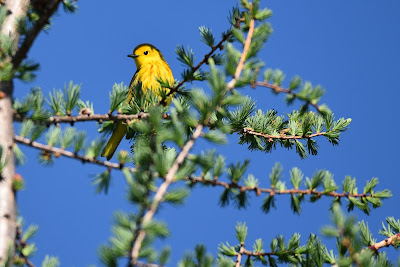 As we hiked we kept our eyes open for caribou, and we certainly saw lots of tracks and scat. Around 5 km into the day we stopped to watch as two Greater Yellowlegs erupted out of a marsh, screaming and heading for the treetops to mount a fierce nest defence. Below them a family of Ring-necked Ducks scurried across the trail and disappeared into the grass. Suddenly a Northern Harrier swooped down out of a nearby tamarack and gave chase to the Yellowlegs. As we watched in amazement, following the Harrier with our eyes, we noticed a group of nine adult caribou and seven babies!!! They were some distance away, but these were the first real live caribou I've ever seen, and watching them run across the open meadow was super exciting!

It was a good day for birds as well. We enjoyed the songs of Black-capped Chickadees, White-throated Sparrows, Wood Thrush, Yellow-rumped Warblers, Yellow Warblers, and Ruby-crowned Kinglets. A definite highlight was getting a really close-up view of two Pine Grosbeaks and a Yellow Warbler. 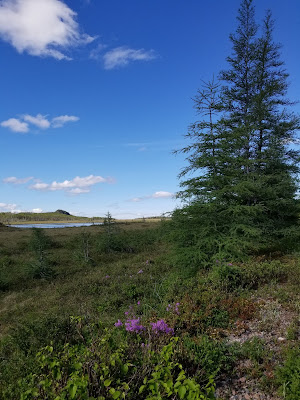 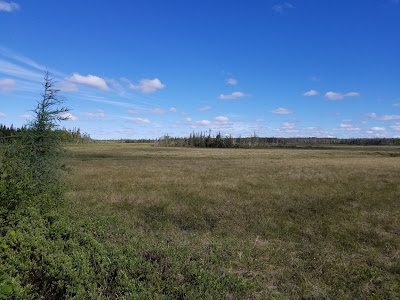 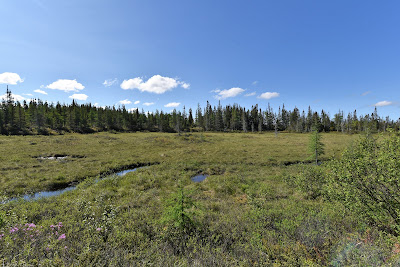 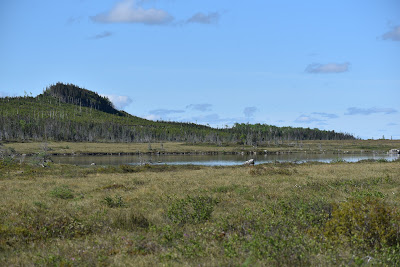 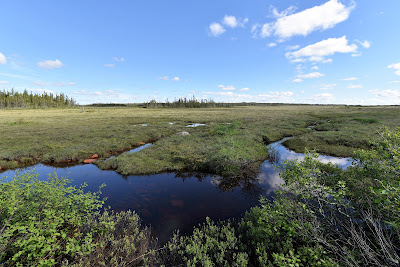 Our progress was slow through this stunningly beautiful landscape, as we paused frequently to admire the colourful rocks, perfect reflections, and interesting hills jutting up in the background. 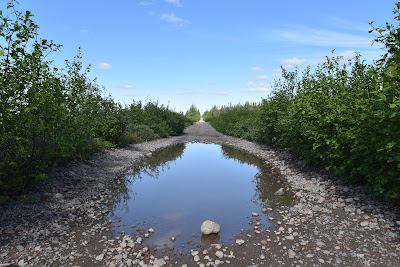 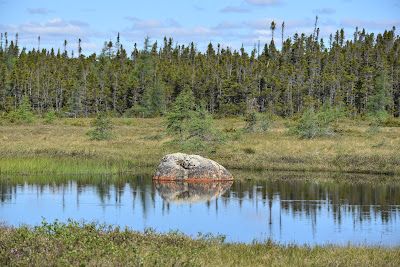 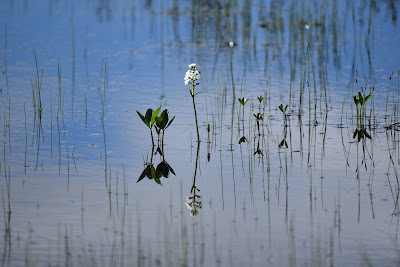 Late in the morning, as we were walking through a wooded stretch we slowed to look at the remains of an old abandoned cabin at the side of the trail. As we stopped a young male caribou popped out of the bushes a few meters ahead of us. He trotted off down the trail, pausing every now again to look back at us. His antlers were just beginning to grow, and it looked like he might have been moulting into darker fur around his head and neck. 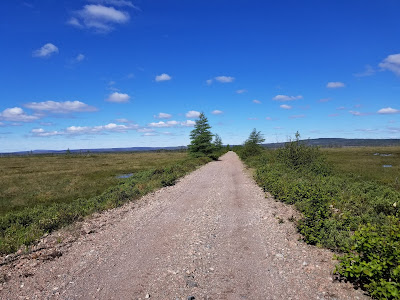 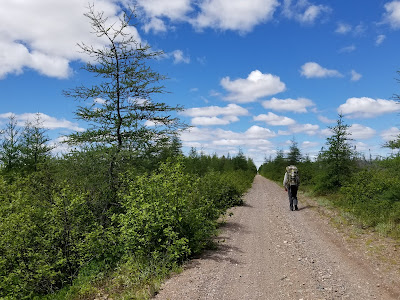 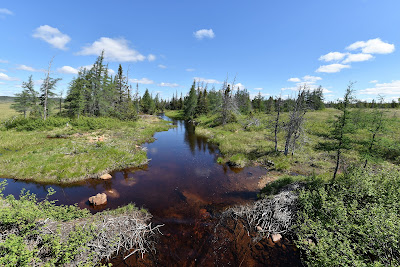 As we began to follow slowly behind the retreating caribou we heard some loud crashing in the bushes beside us. Sean turned to see the rump of a black bear retreating into the forest! 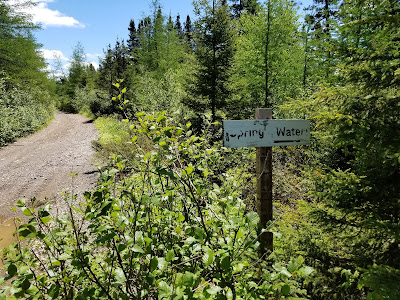 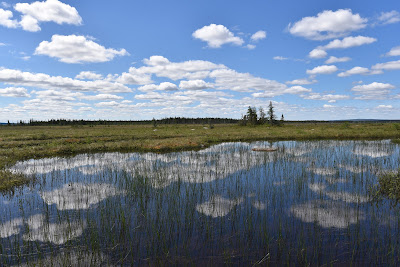 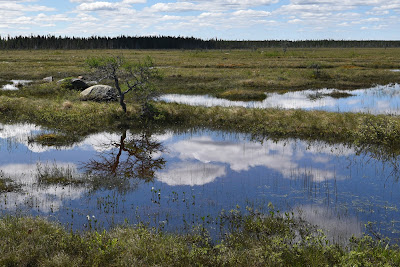 A little farther along in the forested stretch we came across a flat grassy campsite beside a worn sign that read 'spring water'. Being curious, we went to investigate, and sure enough, at the end of a small trail there was a little pipe with ice cold running water flowing out of it! Someone had even provided two mugs for drinking, but we settled for filling our containers and filtering it just to be safe. The cold water was very refreshing. 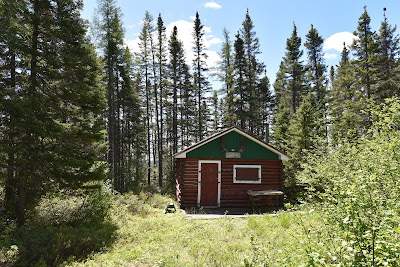 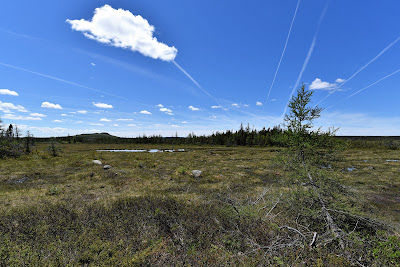 The abandoned cabin wasn't the only settlement we passed today, or the only sign of life. We passed at least half a dozen isolated cabins, some very nice indeed. We were also passed by a group of three cyclists, going toward Millertown Junction in the morning, and then passing us again in the afternoon. Shortly after the cyclists rode by, a group of eight ATVs passed us, each with a retired couple inside. They stopped to chat and make sure we were okay before continuing on their way. 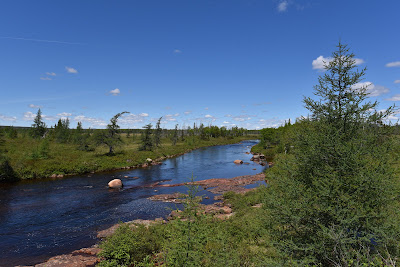 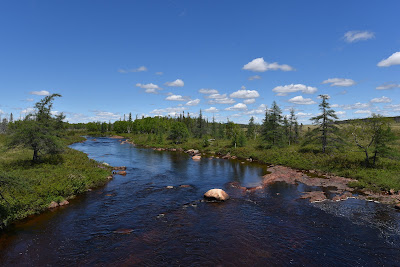 Although we were not alone our here, we definitely had the sense of remoteness, isolation, and wildness that is becoming increasingly rare in our ever fuller and more developed world. This is a stunningly beautiful and very special place, and we feel very lucky to be here! 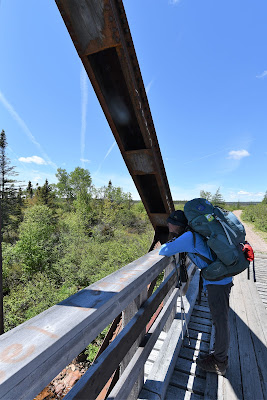 By early afternoon we made it to Mary Marsh, which turned out to be a large trestle bridge over a wide, fast-moving river. The cool breeze from the water was very refreshing, and the rusty red of the rocks under the blue sky made for a beautiful scene. It was hard to keep moving forward, and not just stay at that lovely spot. 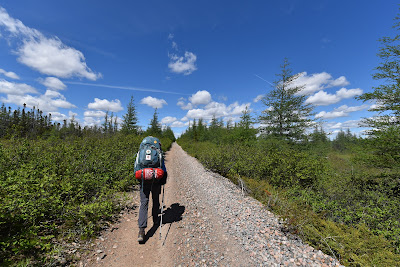 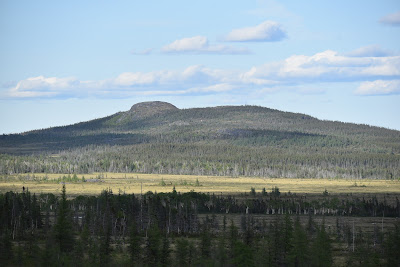 We continued on for another few kilometers and then decided to stop in a nice shady spot on the side of the trail beside a babbling brook. As we set up the tent a family on two ATVs stopped to chat, and give us some advice. When they returned again a few hours later they warned us that they had a spotted another black bear a couple kilometers down the trail.

As the sun is setting over the distant hills, and we hear only the running water and the song of a White-throated Sparrow, it couldn't be any more peaceful.