Beyond Big Cooks Pond to Gallants

Last night we were serenaded by the constant winnowing of a Wilson's Snipe. For hours. Also, it rained! When the sun set there was nothing more than a few fluffy, puffball clouds in the sky, yet somehow we had several hours of rain during the night. Luckily our tent was tucked into a nice stand of spruce, and we managed to stay dry. An added benefit was that I had the company of a very nice, large, grey American Toad as I made the breakfast. 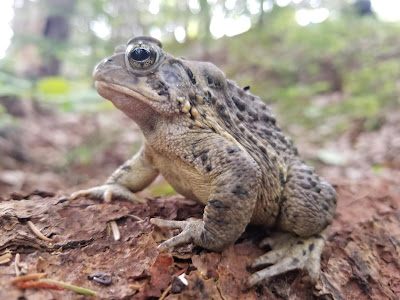 Today's walk was beautiful, as so many of our days here in Newfoundland have been. We began by climbing and following a winding course that curved around the sides of steep, mossy, treed mountains. At several points we had spectacular views down long, treed valleys. 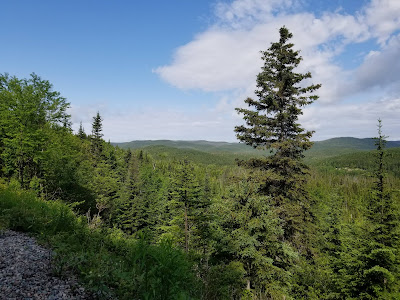 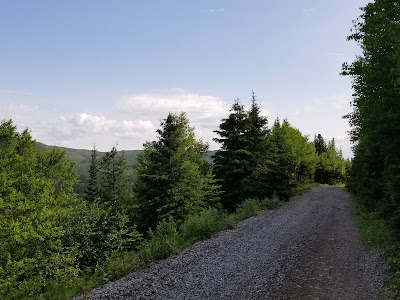 Five kilometers into the day we came to two small lakes. They had cottages along both sides, and it looked like there was quite a bit of logging in the hills behind them. Just as we hiked past the second lake we were unexpectedly hit by a scattered shower. We ducked off the trail to shelter under a stand of spruce, and when the sun came out a few minutes later we were treated to a wonderful view of sparkling raindrops hanging from each leaf and needle. 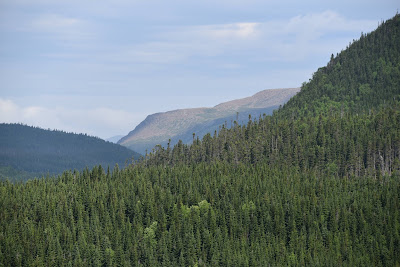 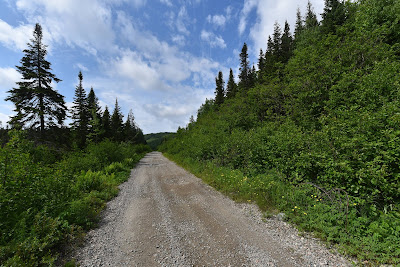 As we waited out the shower we were surrounded by active, singing birds. Today we saw and heard a lot of finches in particular. At one point we stopped to watch a White-winged Crossbill eat grit from the trailbed. We also heard quite a few Red-breasted Nuthatches, White-throated Sparrows, and Black-capped Chickadees. We were also entertained by flocks of different birds eating dandelion seeds at the side of the trail. 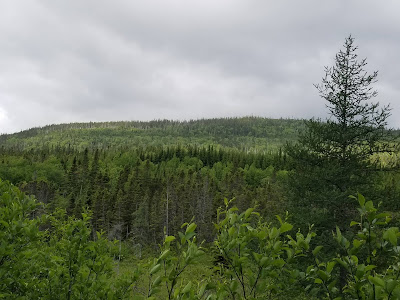 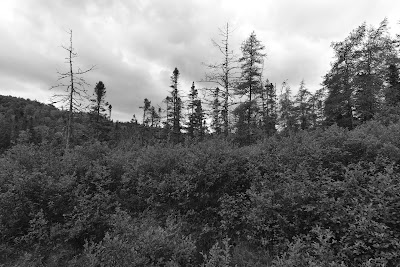 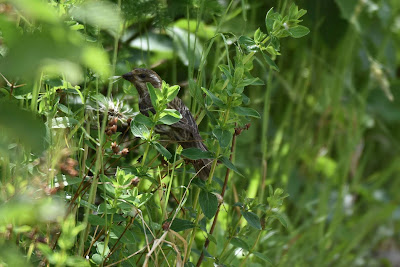 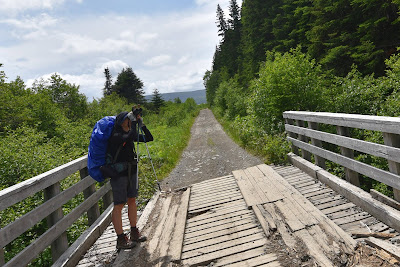 When we came to George's Lake, we discovered it was a very big lake, which we walked beside for about 10 km. It was beautiful, with small islands in the middle, and a shore broken up into long fingers that seemed to recede into the mist. The wind was blowing quite strongly against us as we skirted the edge of the lake, which made the going energy intensive. Looking down the length of it reminded us of the Sechelt Inlet in BC. Some of the similarities we've been seeing during the past couple days between the east and west coasts of Canada have surprised us. 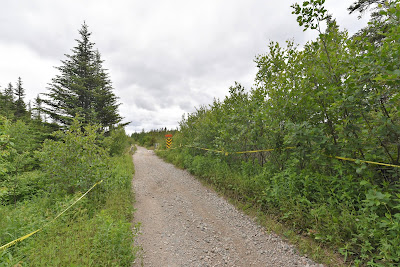 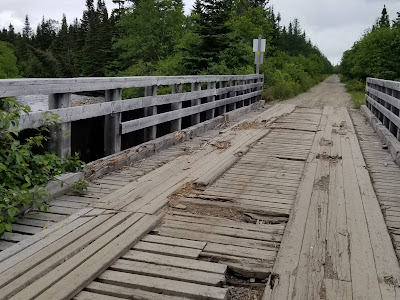 One thing we noticed in the stretch of trail west of Corner Brook is that many of the trestle bridges are in a state of disrepair. It is clear that east of here the Great Trail and the snowmobile associations have put in a huge amount of work to upgrade to the trail and its bridges, but it seems they haven't gotten this far yet. This is surprising, because the homes and cottages in this region are very modern, large, and prosperous looking. 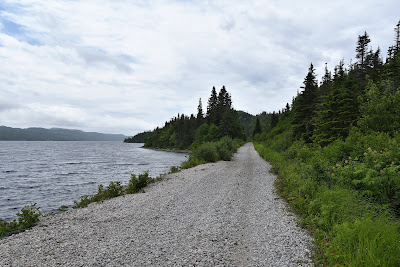 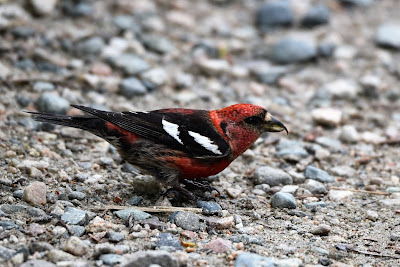 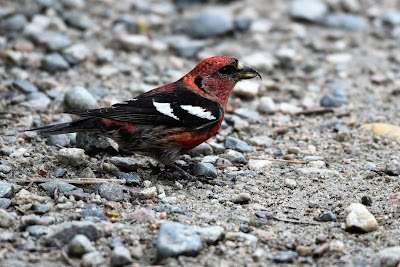 Around 2:30 PM we reached the small community of Gallants, after following a beautiful stretch of river for several kilometers. Gallants is a small collection of houses with a church and community lounge at the center. We walked up to the Camp 7 Lounge hoping we could get a cell signal, but no luck. 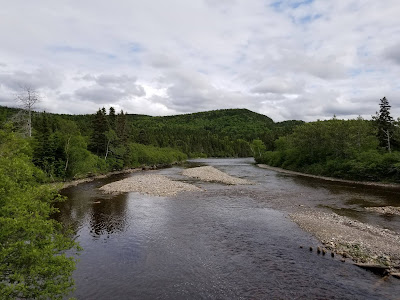 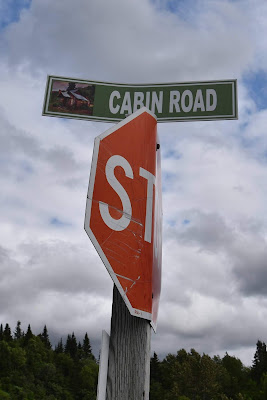 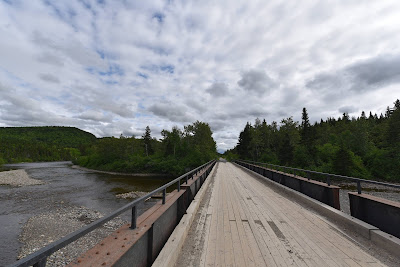 We stepped inside for a snack, and the very kind bar tender let us use the phone. We were able to reach the Callahans, who had very generously offered us the use of their cabin whenever we passed through.  We spoke breifly, and learned we had a place to sleep tonight! Very exciting!! 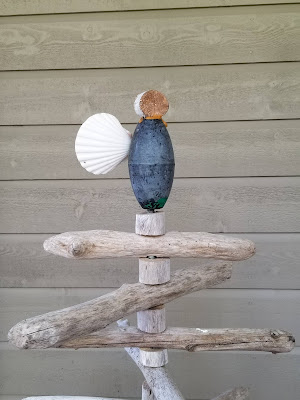 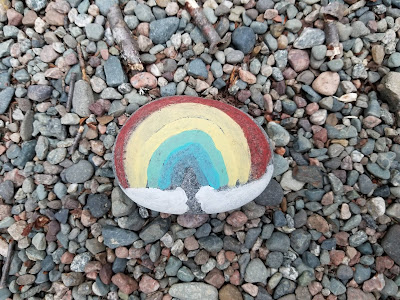 We hiked a few kilometers past Gallants, and using a set of coordinates, found the cabin. It is absolutely amazing, with a wonderful view of the fast, rushing river flowing past, a fireplace, and poems, sayings, maps, and fish carved into the wooden walls. We sat on the covered porch and enjoyed the view, finding peace in this beautiful spot. We once again end the day feeling extremely lucky and blessed.