This morning dawned sunny and already hot at 6 am in our little mossy clearing at the side of the river. As we set off down the trail, we found a boat launch and Great Trail picnic shelter about half a kilometer past where stopped. It certainly would have made getting water easier! Oh well, our little mossy glade was peaceful and cozy. 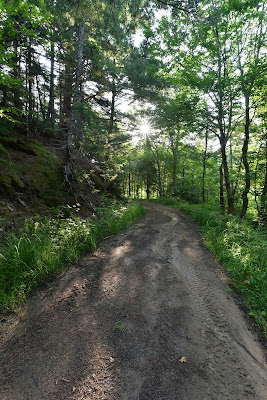 We walked a nice gravel road for a bit and then began to climb, and climb, and climb. Luckily we were on a shady wooded track for most of the first hill, but it was quite an effort. We were rewarded at the top by a nice view back down the valley. 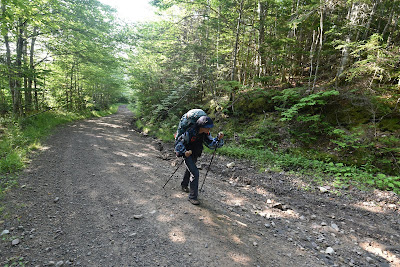 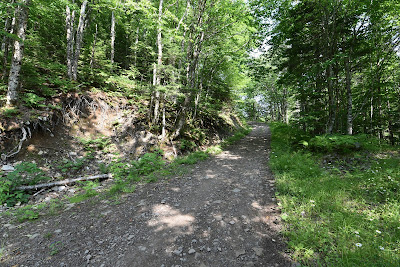 After that the day continued in much the same way. A very steep climb up a hill, a few meters of flat ground at the top, and then a very steep descent down to a river with a small trestle bridge over it. Repeat. It was a beautiful landscape, with some fantastic views over the island, but it left us wondering who would have built such a road? In what industry can it possibly make sense to go over ridges instead of following along the top or traversing the valley? The trails and bridges are well signed and maintained by the snowmobile associations, and some sections are clearly used for logging, but the grades seemed almost too steep for motorized vehicles. 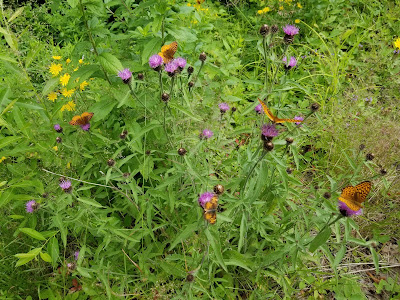 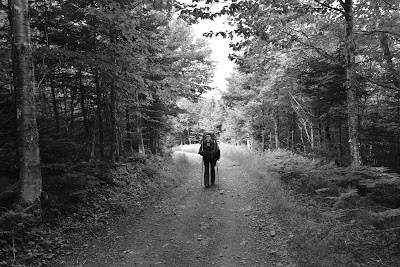 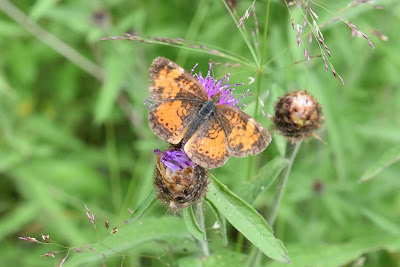 There were some wildlife highlights for today, to be sure. The first was nearly stumbling over a Wood Thrush fledgling that was standing in the middle of the trail. It had a very short tail, and could only manage to get a few inches off the ground as it frantically ran and bounced along the trail. 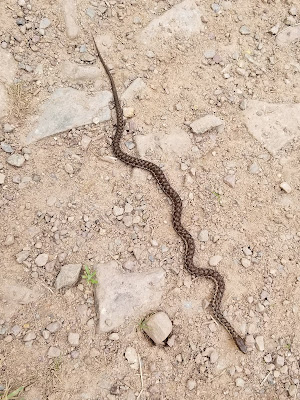 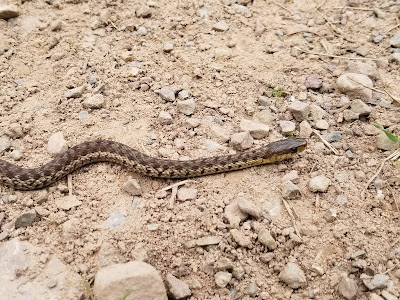 A few kilometers later, as we were enjoying an open stretch of trail with lots of pink, yellow, and purple wildflowers, we came upon a small Western Terrestrial Garter Snake. He was small and brown, and lacked the bolder yellow and black stripes we are used to seeing on garters. 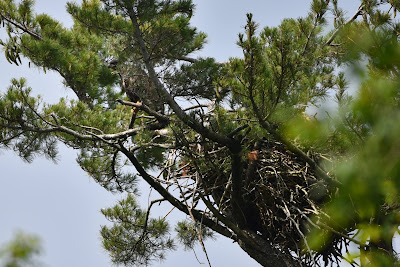 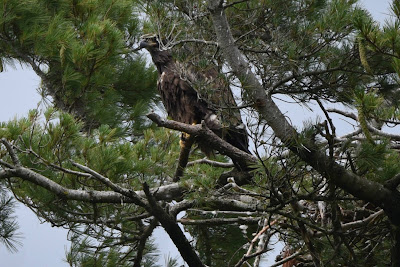 As we were crossing a trestle bridge at the bottom of a particularly long and steep ascent we heard a loud high-pitched call from way up high on the hill. Looking up, Sean spotted a giant stick nest in the top of a super canopy pine tree. When we looked up we saw a giant Bald Eagle nestling in the nest! We waited for a bit to see if the adults would return to the nest, but no one came. 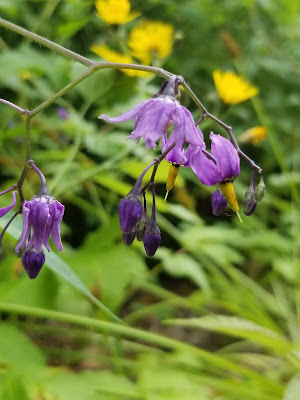 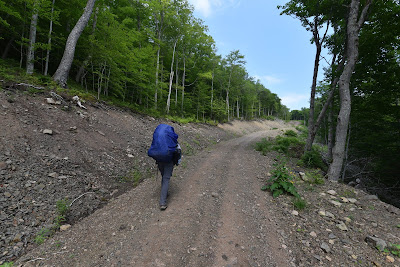 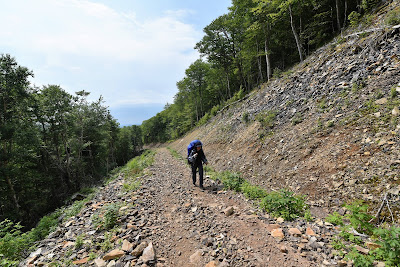 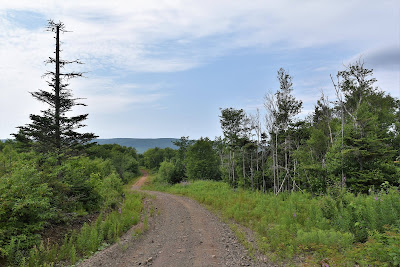 Towards the end of the day we had a long steep descent which gave us a panoramic view of the ocean and the town of Inverness. The cooling breeze coming in off the ocean felt like a God-sent in the 33°C temperatures! 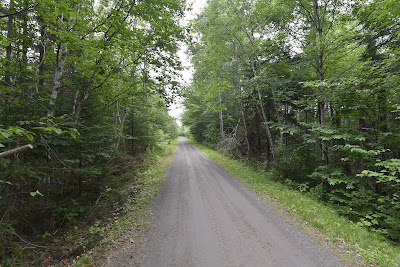 At the bottom of the hill we had another treat. As we turned onto the trail into Inverness we found a wide, smooth, trail covered in pea gravel, without even a single pothole or small hill. It was like heaven. We were passed by a group of people on road bikes, and then by a group of ATVs. These were the first people we've seen on the trail in two days, which is a big change from Newfoundland, where people passed us every day. 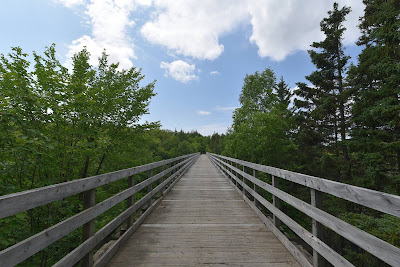 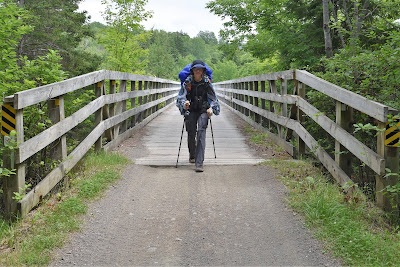 Just before we got to the edge of Inverness, we crossed the Deepdale trestle bridge. This is probably the tallest trestle bridge we've crossed so far, and it spanned over a clear, shallow, fast flowing, rocky river far below. The bridge was built in 1901, connecting a train line from Port Hastings to Broad Cove. 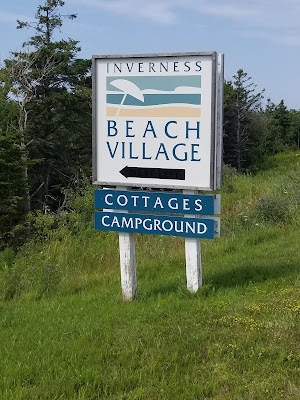 As we walked through Inverness to the Inverness Beach Cottages and Campground, where we are camping tonight, we stopped for a resupply. This was the main reason we hiked the trail branch that dead ends in Inverness. Tomorrow we will have to backtrack over 4 km to begin heading south again towards Mabou.


Inverness seems like a nice little town, located right on the coast. It has a large golf course with holes right on the cliff tops adjacent to the sea. There is also an outfitter offering kayaks and bikes for rent, as well as various boat excursions. The town's slogan is 'Come to Play' and it seems the affluent do just that. 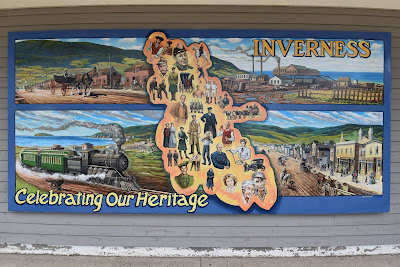 As we entered this tourist town we passed a house with a man playing a tin whistle on his porch. He was playing Celtic music, and very talented. It seemed like a nice introduction to the 'music coast.'

The campground is beautiful - located on top of the cliffs, overlooking the ocean. We met a lovely lady who runs the place, who says she is an artist and painter who likes to notice the typically overlooked things, and see the world in a different way. It seemed like the best way to describe what we hope to do on the trail. We set up the tent, had an ice cold shower, and did laundry. It seemed heavenly. Then we walked back in to town, down the boardwalk to the ocean. It was very beautiful walking through the sand dunes and highly fragrant wild rose bushes. 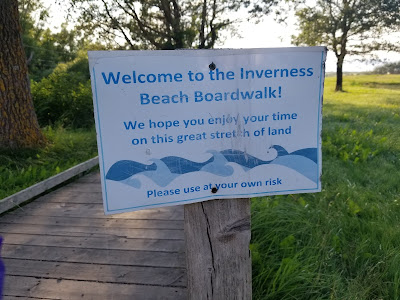 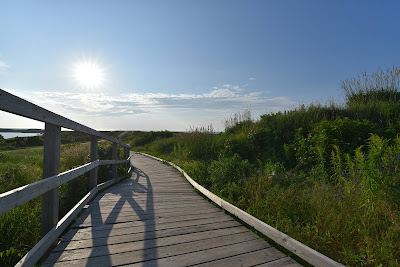 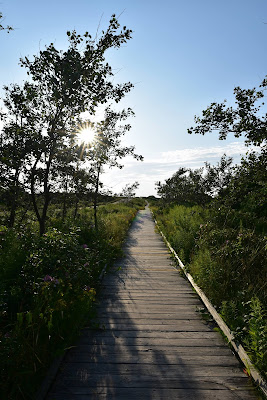 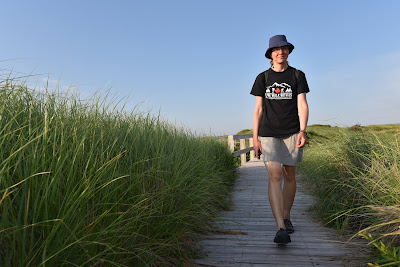 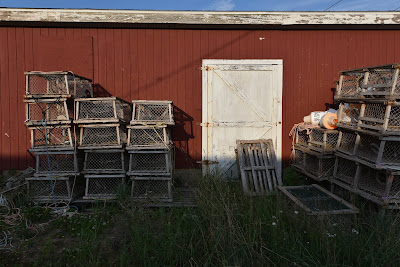 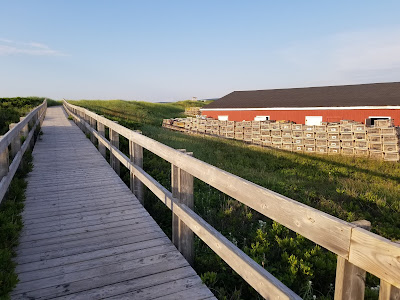 We stopped on the way home to watch the sun set in the Atlantic. It put on quite a show. It is a truly beautiful night on Celtic shores of Cape Breton Island.  As we fall asleep in the  campground, atop the cliffs on the edge of the Atlantic, we can hear the crackle of campfires and the sounds of live fiddle music from a few sites over, and we can see more stars in the clear night sky than we knew were possible. 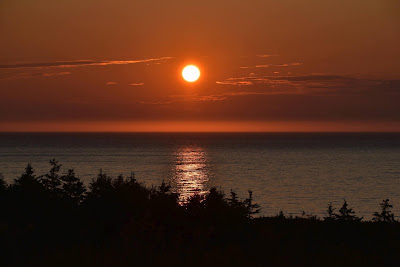 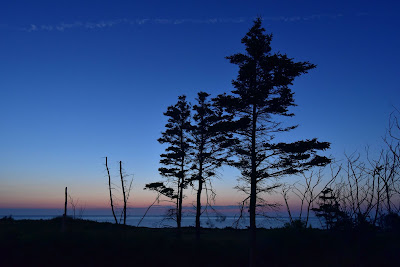