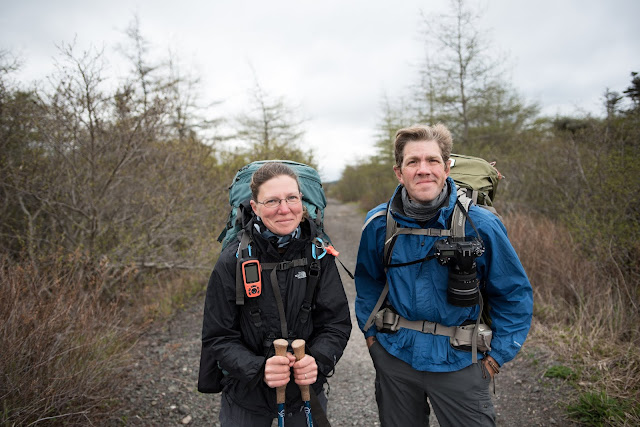 Sonya Richmond and Sean Morton of Simcoe have completed the first province of their cross-Canada hike. (DANIEL BAYLIS/CONTRIBUTED PHOTO)

A Simcoe couple that is hiking across Canada has completed the first province in their journey.
Sonya Richmond and Sean Morton are on a three-year trek across the country, travelling along Canada’s 24,000-kilometre Great Trail. Called Come Walk With Us, the trek is meant to inspire people to get outdoors, connect with nature and give birding a try.

They held a kickoff event in Newfoundland during the last week of May, and took their first steps of the journey on June 1.

Nature Newfoundland set up a talk at Memorial University of Newfoundland to mark the beginning of the couple’s adventure. About 20 people walked the first five kilometres with Richmond and Morton.

They were in Newfoundland for 49 days, of which 39 were spent hiking. So far, they have covered 890 kilometres of the trail.

Richmond and Morton are behind their schedule.

“I think that’s mostly because we’ve been stopping, which has been good,” Richmond said in a phone call this week. “We have no regrets but we’re about two weeks behind.”

He said the couple has mean at lot of ATV riders.

“They were really nice to us,” said Richmond.

“A lot of them checked on us to make sure we were OK; they were offering us food and water.”

Newfoundland provided a lot of diversity for the couple. On the province’s east coast where they began, they were walking along the Atlantic and saw many seabirds and some icebergs. The centre of the province featured wetlands, small lakes and then a vast open landscape. And the west coast presented a collection of mountains and sandy beaches.

One thing they have learned along the way is that the local residents are more reliable than following directions on their cellphones, said Richmond.

“A lot of the information online was outdated or not very accurate,” she said. “We learned pretty early that asking local people where the next spot to get groceries was is much more reliable.”
Richmond said she and Morton are looking forward to next hiking across Nova Scotia.
The trip can be followed online on the Come Walk With Us website and social media pages.

Donations can be made on the couple’s website or directly to Bird Studies Canada.

They plan to return to Norfolk for a Christmas visit.