Today there was a lot of climbing, exciting bird moments, and map challenges.

As we made breakfast and packed up we were serenaded by the same enthusiastic Winter Wren that sang us to sleep. It was very peaceful at the bottom of the river valley, and as the sun came up over the edge and bathed the forest in golden light it felt very magical. 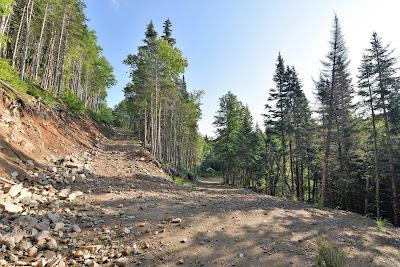 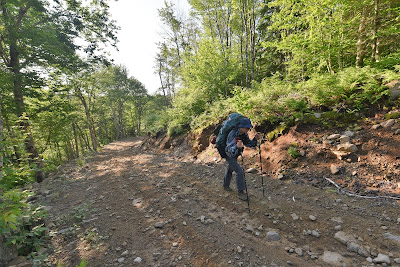 We began with an incredibly steep switchbacked climb out of the valley. At the top we walked through a stretch of newly regenerating forest. It wasn't too clear whether the forest had been logged, or if it was recovering from being farmed. Either way, the area was lively with birds, including lots of very active Dark-eyed Juncos, American Robins, Chipping Sparrows, and Song Sparrows. 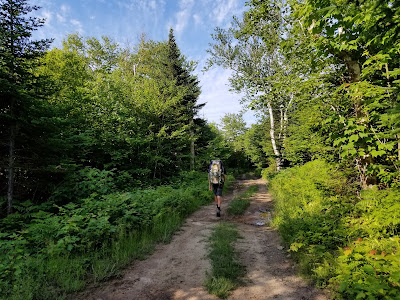 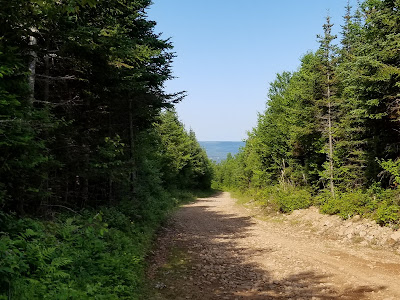 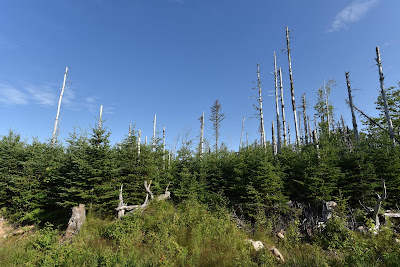 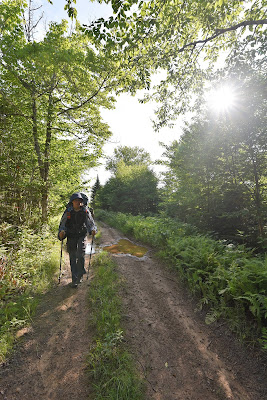 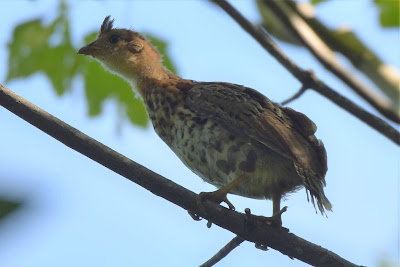 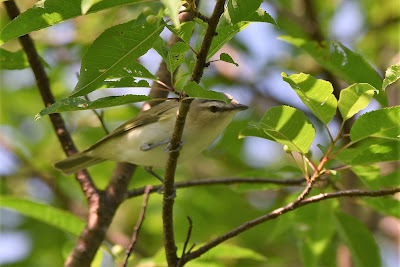 A few kilometers in we came to Verna's View, which was a lovely lookout over Ainslie Lake, Cape Breton's largest freshwater lake. As we stood enjoying the cool breeze and the view, we watched a pair of Red-eyed Vireo collecting food for their offspring, and listened to a pair of highly vocal Wood Thrush alarm calling and frantically warbling. 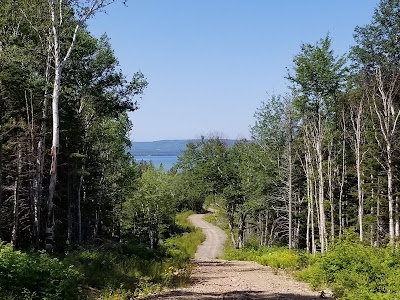 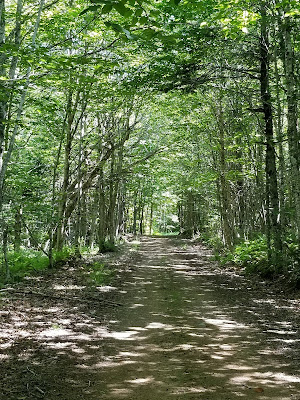 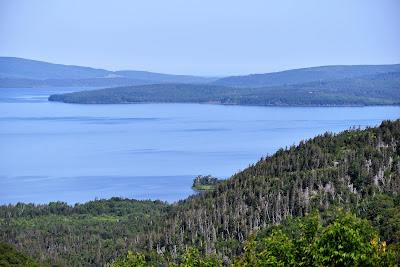 As we continued along the trail, which was now thankfully a lovely shaded track, we got another surprise. This one was in the form of six Ruffed Grouse fledglings erupting out of the greenery at the side of the trail like popcorn and clumsily flying up into the trees. The adult paced back and forth in the shrubs, making its distinctive whining alarm call. After we recovered from our heart attacks we enjoyed the cute Grouse babies. 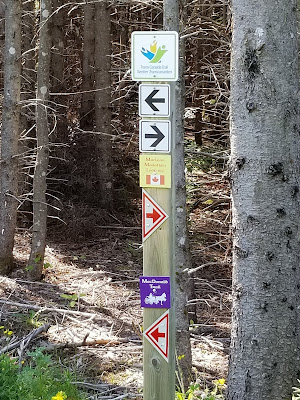 After the lovely viewpoint we had a very steep descent down to the road. We had been under the misconception that we would be walking the edge of the lake, but we weren't really anywhere near it. Fortunately, there was a new section of trail that took us off the highway, although it took us a while to realize it.

Along this stretch we saw an osprey nest perched atop a communications tower. The adult was perched on the edge of the nest, but we didn't get a peek at the nestlings.

The stretch of trail beside the road was hot and shadeless, but lined with beautiful yellow, purple, and pink wildflowers, as well as lots of blooming wild roses, which gave the hit afternoon air a very strong fragrance. 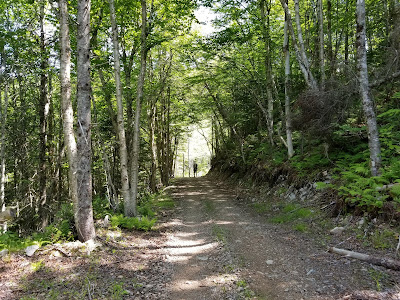 We took a break in the shade just before the trail climbed back up into the woods, and as we sat among the flowers a pair of Bald Eagles swooped low over us before soaring up to circle above us. We felt honoured to see such majestic birds.

As the trail climbed we found ourselves in a lovely, shaded, green tunnel. The forest was a mix of balsam fir, spruce, sugar maple, yellow birch, and other deciduous species, and it had some incredible mosses and lichens. As we huffed and puffed up one of the hills we were amazed to see a large silver fox standing on the trail in front of us. Its body was mostly grey, with a reddish tinge to the tail fur, and black front legs. It stood there silently for a few moments, and then disappeared into the ferns on the edge of the trail. A magical moment! 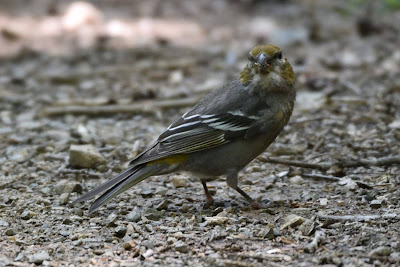 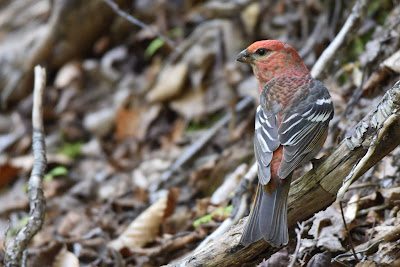 Not too long after this we had another surprising wildlife moment. We came upon a pair of Pine Grosbeaks foraging in a wet patch on the edge of the trail, and above them was a pair of Boreal Chickadees. Although I knew there was both Boreal and Acadian forest on Cape Breton, I didn't expect to see either of those species where they were. 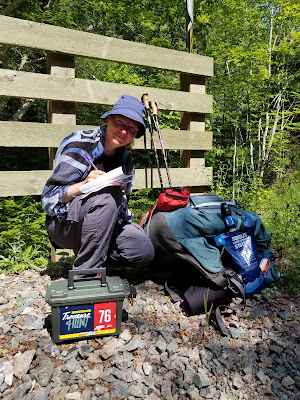 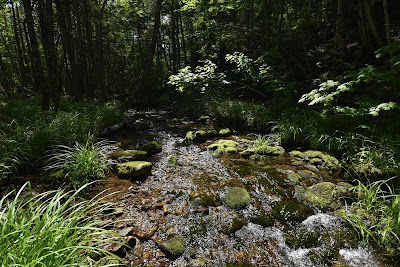 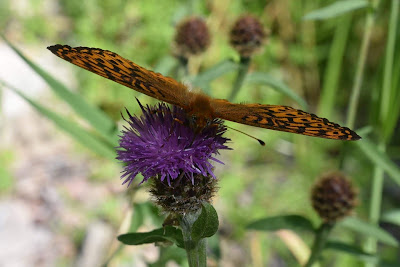 After another few climbs and descents we came to a trestle bridge over a lovely, burbling, mossy brook. Sean went down to photograph the water, and I figured I would go refill our water bottles while I had the chance. I grabbed the water filter and headed down the opposite side of the bridge .... only to discover Box 76 in the Great Trail Treasure Hunt! We had the coordinates, but thought we were still about 600 m away at that point. What good fortune!

As I was messing about below the bridge with the water filter, Sean climbed back up and suddenly I heard the screaming cry of a Red-tailed Hawk! One had swooped low over the bridge, wanting to land on a trembling aspen nearby, but had gotten surprised by our presence. The amount of whitewash below the tree made it look like the hawk hung out there frequently. 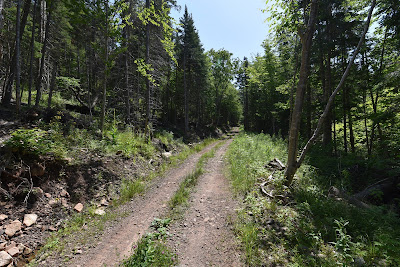 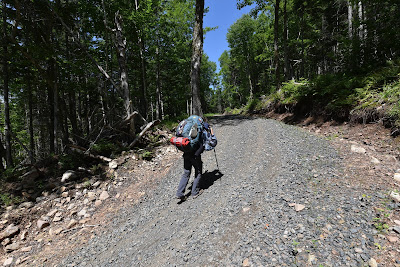 After our successful treasure hunting, we ran into a bit of a snag. We came to a fork in the trail, and although it had a Trans Canada Trail marker with an arrow, the arrow and sign appeared to us to be pointing straight between the forks in the trail. We pulled out the Great Trail App and took a look. It said to take the right-hand fork, and we thought there were more ATV tracks that way, so we set out. Around 1.5 km later the road came to a dead end. There was nothing for it but to backtrack to the fork and take the other branch. We were pretty hot, tired, and frustrated by that point. 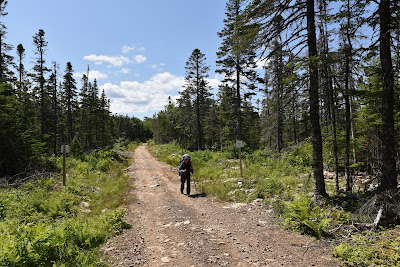 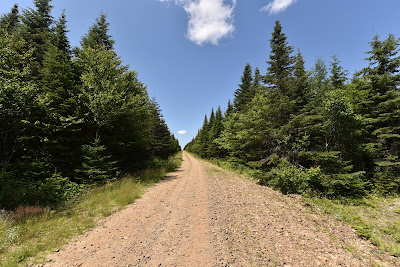 The correct fork in the trail, which was well signed for snowmobiles, took us through a forested section, and then out into an abandoned quarry. The quarry was recovering, with open fields, wildflowers, and newly regenerating forest giving it the feel of a conservation area. The path got slightly confusing when it turned to field, and then skirted a gigantic gravel pile, but we stuck with it and soon found ourselves back in the woods.

Our next surprise was finding ourselves in another area that was actively being logged. This time the road was so steep it was nearly impossible to walk down it. There were no switchbacks, just gentle turns on an otherwise straight run. We have no idea how a loaded logging truck could possibly have driven down it, or how a snowmobile could get up it! 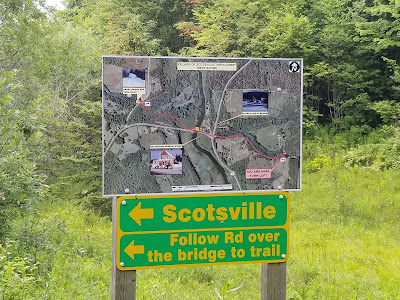 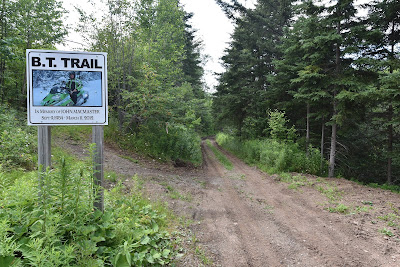 Since we were no longer on the Great Trail at this point, but following a snowmobile route, we continued along it until we got to Scotsville. We had hoped that the General Store there would have something cold to drink, but no such luck - it closed at 3 PM on Sundays.

We continued past the store and over the large trestle bridge that spans the Southwest Margaree River,which is a Canadian Heritage River. It was wide and slow moving, and we hoped to camp somewhere along it tonight. 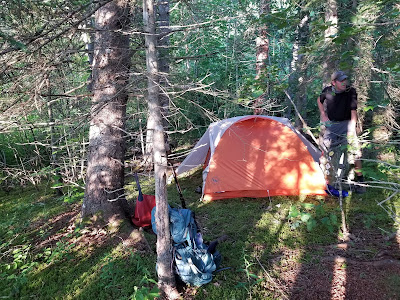 We continued down a road, actively looking for a campsite. Unfortunately the whole area was swampy and extremely buggy. We looked at a few spots, feeling hot, tired, and a little desperate. Finally we spotted a nice mossy patch of forest, and upon exploration discovered it was just possible to wedge through the cattails to the river to get to water. Home for the night!