This morning began early with a much appreciated act of kindness from Tina. She picked us up at MUN Grenfell Campus, where we spent yesterday cleaning up, and drove us down to Valley Mall for an interview with CBC Corner Brook. Tina gave us many offers of help while we were in Corner Brook, and when she left us she even gave us a bit of trail magic in the form of homemade date cocoa balls. When we stopped for our break we discovered they were super delicious! There is no denying that it is these wonderful acts of kindness which on challenging days give you the strength to keep going. 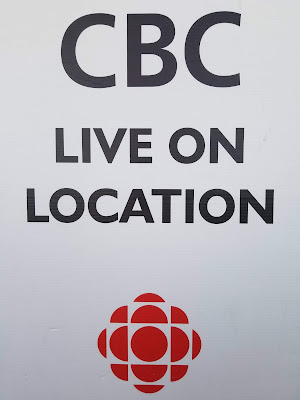 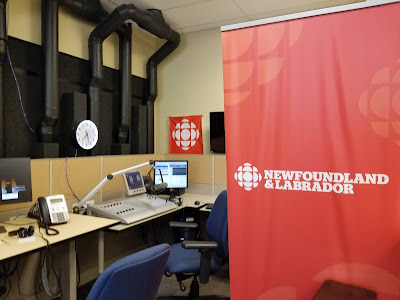 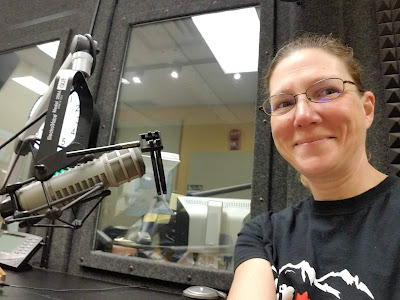 The interview seemed to go well, and we'd like to thank the amazing people at CBC Corner Brook for giving us the opportunity to talk about our hike, and our goal of getting people to connect with nature through birding. It was very interesting talking to them, and they made the interview a pleasure.

After the interview we stopped for a coffee at Tim Hortons, and then headed down towards the harbour and the Great Trail. On the way we passed a very large and fully functional pulp and paper mill. Curiously, unlike the mills we've seen in BC, there didn't seem to be a smell produced by this one. 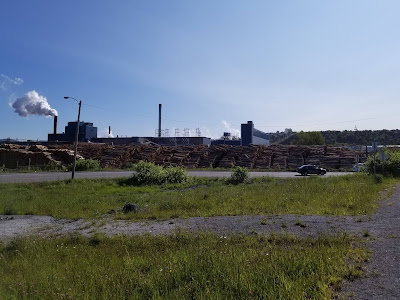 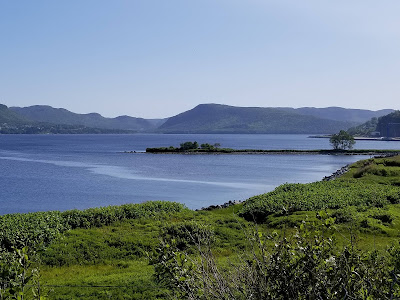 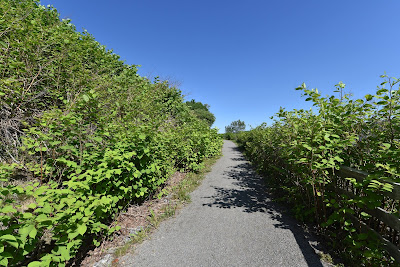 When we reached the water we found a nice, shaded gravel path that wound through neighborhoods along the harbour. There were quite a few people out walking and jogging on it, and it offered beautiful views back down the harbour.

As we walked this section we spotted a pair of Cedar Waxwings, several American Goldfinches, American Robins, and a Song Sparrow. Below in the harbour we recognized Double-crested Cormorants, Greater Black-backed Gulls, Herring Gulls, and Ring-billed Gulls. 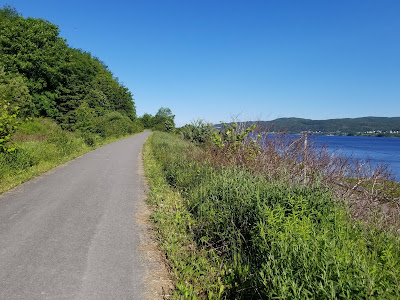 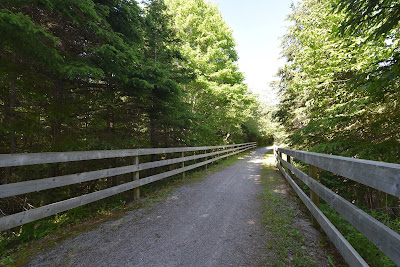 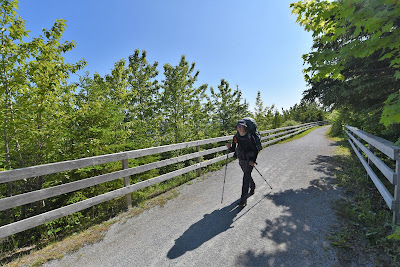 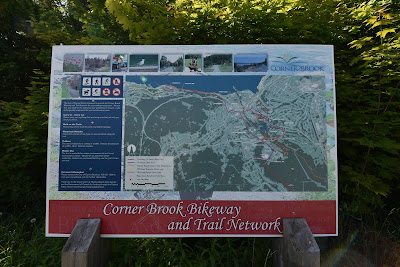 As we made our way along the harbour we eventually came to signs directing ATV traffic up the hill. We followed the signs up through a neighborhood, and eventually joined the Great Trail once again. It continued as a wide, treed track, first through neighborhoods and then up, up, up into the forested mountains. 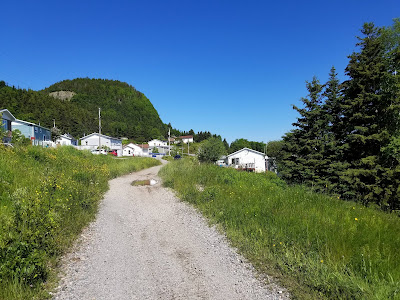 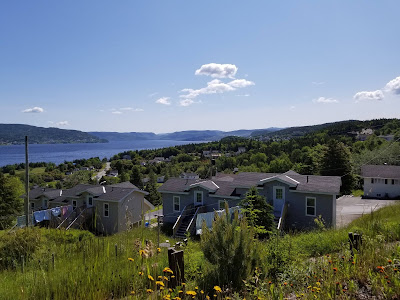 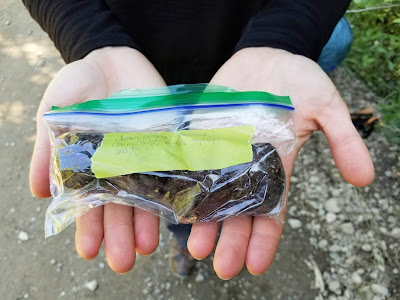 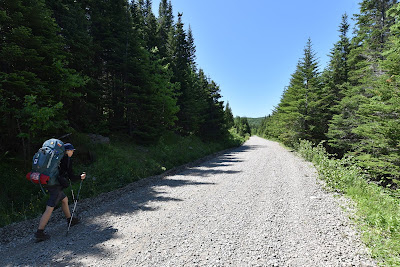 As we took a break to enjoy the fabulous cocoa balls Tina generously gave us, we spotted a Pine Grosbeak feeding on some dandelion seeds in the shrubs at the side of the trail. It was quite interesting to watch him consume the seeds without consuming the fluff.

It was a nice climb on a clear sunny day with a good strong breeze to cool us off. We stopped at a clear, fast running stream for some photos and to refill our water bottles. 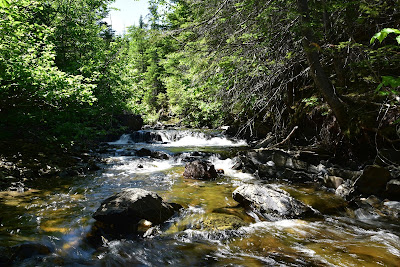 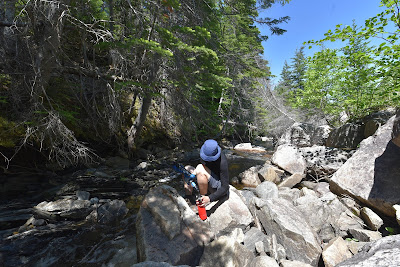 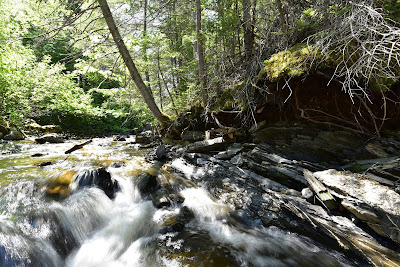 The Great Trail in this section was more of a road than a track, and there was a lot of vehicle traffic on it, both from ATVs and vehicles. One person stopped to make sure we were okay, and a few slowed down, but many just sped by at full speed. 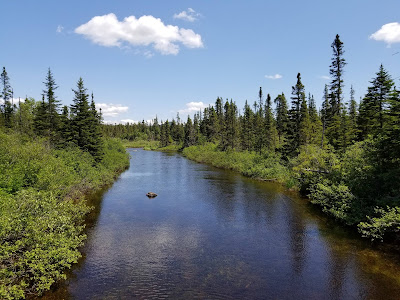 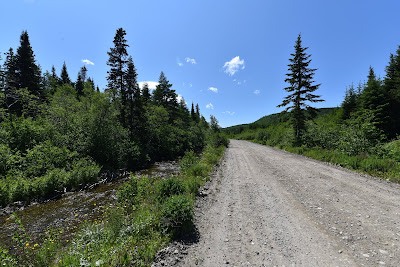 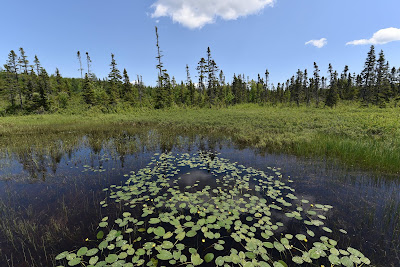 By noon we reached a small lake with a few cottages on it. We stopped to explore an access point that led down to the water and found a bench and small campsite. Some places are just meant for taking a break! 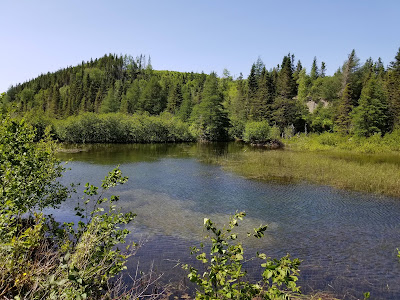 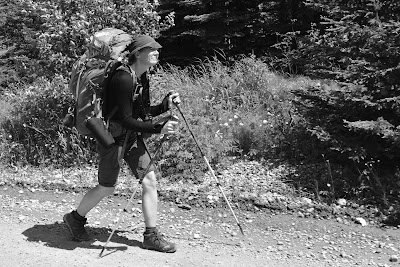 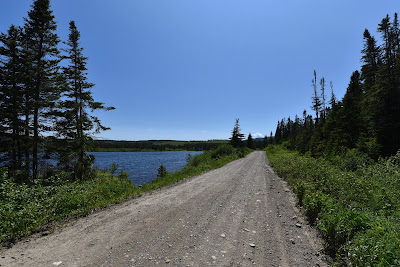 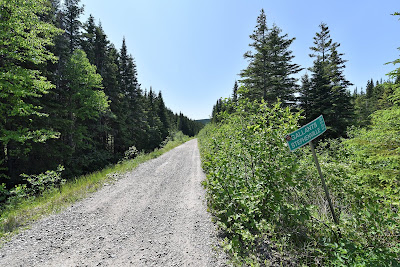 We decided to continue on, and soon came to Big Cooks Pond. This was a very beautiful lake, again with cottages on one end. As we walked along we heard the unmistakable sounds of Common Loons calling. 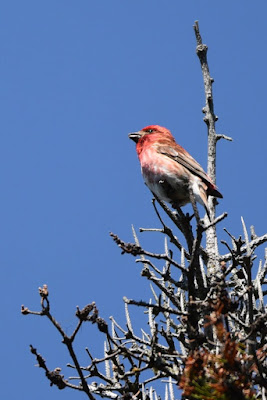 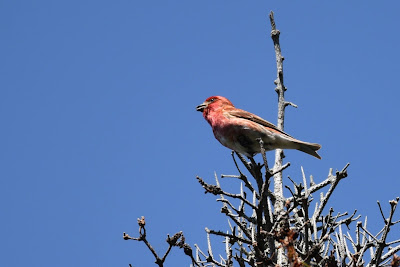 We decided to keep going, and soon found ourselves climbing again. As we did we got a great view of a Purple Finch perched atop a white spruce. It was singing its heart out, which was quite a joyous sound. 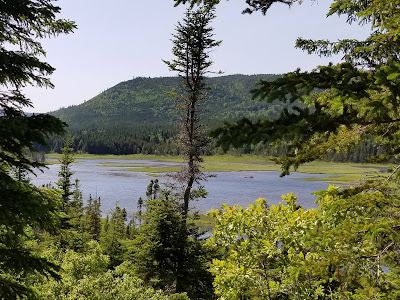 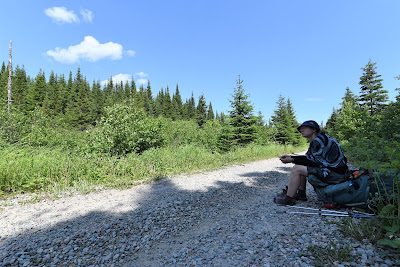 As we looked down into a lake far below us, we were amused to watch a group of ten Canada Geese chase each other around and make large splashes on the surface of the marsh below. We also paused to enjoy watching the wind playing on the surface of the water, creating waves that seemed to continue on in the marsh grasses. There were also three Tree Swallows catching insects in the breeze above the water. 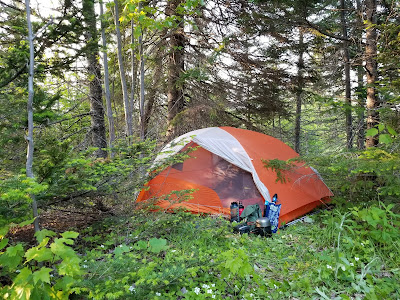 Eventually we found a nice treed spot to pitch the tent a few meters off the trail, partially obscured by trees and sheltered from the wind. There was a nice stream nearby for getting water, and we spent a peaceful evening enjoying the wonderful mountain air. As we fall asleep we can hear the sweet song of a Swainson's Thrush, the short calls of a Boreal Chickadee, the warbles of a Golden-crowned Kinglet, the toy-horn beeping of a Red-breasted Nuthatch, the familiar song of the White-throated Sparrow, the persistent winnowing of a Wilson's Snipe, and the calls of something that sounds like texting. It's a mystery.