Today was a day of trestle bridges. It began as a dark, windy, overcast morning, which did not inspire us to get up and get going. We lazed about until 7:30 or so, and then somewhat grumpily made our oatmeal and coffee. The highlight was having a picnic table to eat it on. Things took a decided turn for the better when the campground restaurant unexpectedly opened at 9:30 am. Deciding this was too good an opportunity to miss we headed inside for a coffee and second breakfast of omelette, toast, and hash browns. We were joined by Neil, and I think the interesting conversation we had about mental health, career changes, fossil hunting, and the scientific community was probably the reason we were meant to end up at that campground and have the slow morning we did. Lots to think about.


The owner of the campground showed us how to access the trail from the back of the park, which was a much shorter and nicer walk than the one down the road that we did yesterday. The path out past the chalets took us to a beautiful, wide, shallow river. It was the first river of many today, and we crossed it on the first of many trestle bridges. Each bridge we crossed made us think of Dana Meise who had to ford these rivers without the benefit of bridges, or find an alternative route around them, on his trek across the country. We were very grateful for the bridges! 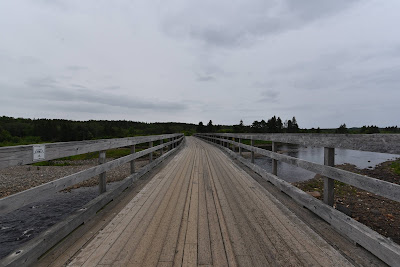 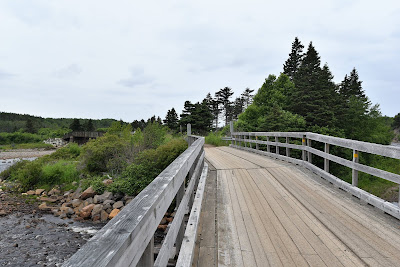 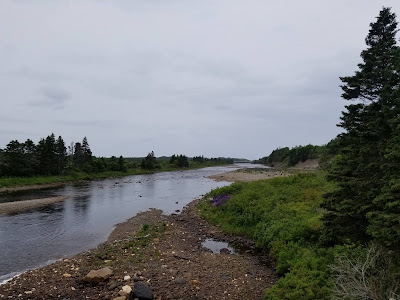 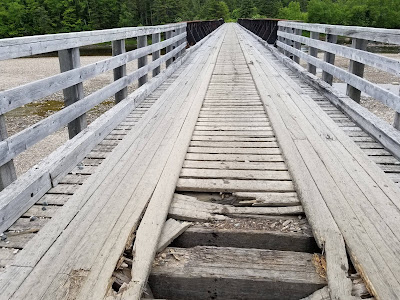 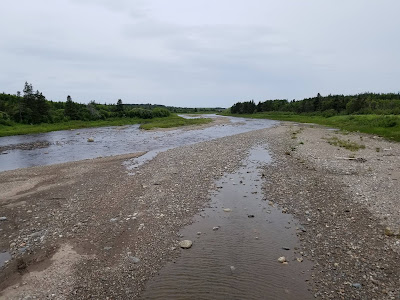 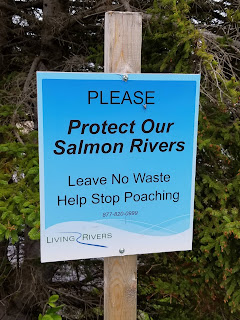 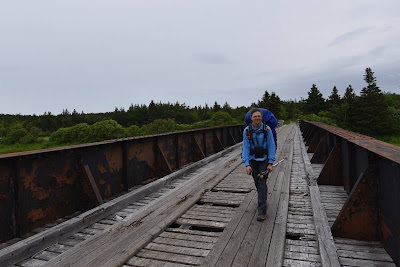 Today's section of trail took us parallel to the coast, repeatedly crossing roads to coastal communities and rivers that headed out to the ocean. When we reached the road to St Fintans we were pleasantly surprised to find a convenience store/liquor store/post office/gas station. Over the past few days we've become insatiably hungry, so we splurged on some homemade oatmeal raisin cookies and gingerbread squares. It was a welcome treat. 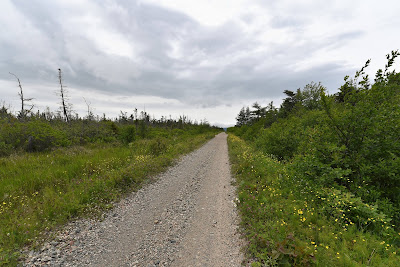 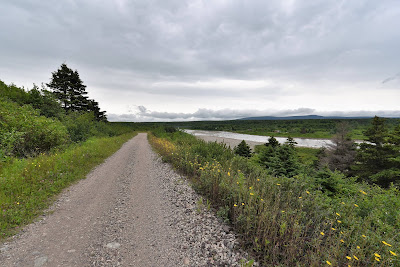 
At one such vantage point we paused to watch a Spotted Sandpiper picking it's way along a rocky island in the middle of a river. At another we watched the aerial acrobatics of a group of Tree Swallows foraging for insects above the water. There were many active Yellow Warblers, Yellow-rumped Warblers, Black-and-white Warblers, American Redstarts, and American Robins feeding young in the shrubs along the rivers. 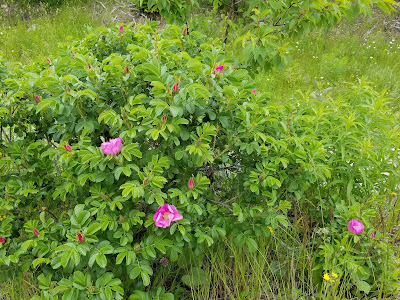 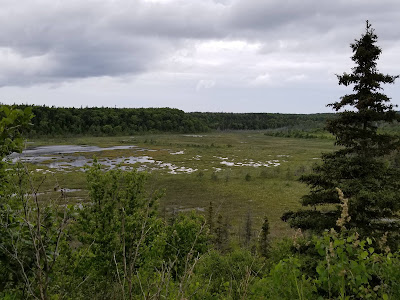 As we climbed we noticed a shift toward more cattails marshes. This is something we didn't see a lot of in eastern or central Newfoundland. In one such marsh we spotted a pair of Common Mergansers, which is a first for us on this hike. 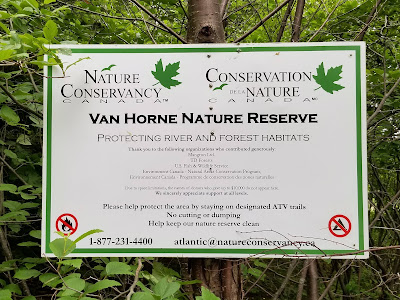 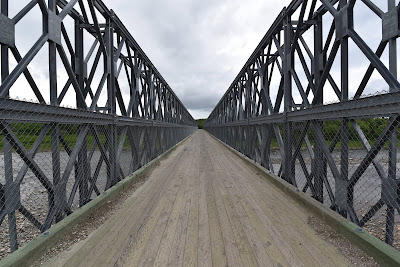 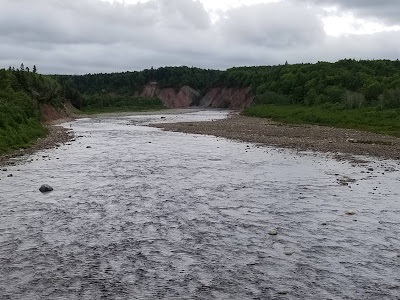 Just before we crossed the Crabbes River we passed a sign for the Van Horne Nature Reserve. This reserve is a 606 ha property managed by the Nature Conservancy of Canada to protect the white spruce and balsam fir riparian forest habitat, several species of rare plants found along the Crabbes River, and the river itself, which is a salmon river.  It also has an interesting history that is tied to the railway. It was first owned by Robert Reid, and later sold to Sir William Van Horne who helped CPR build the railway into the prairies, founded the C hotels, and the started the Empire steamship line. 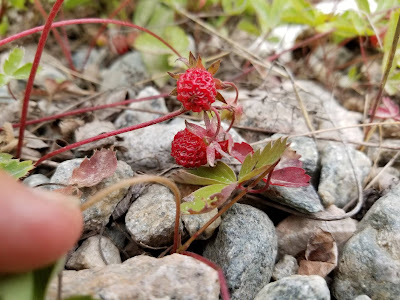 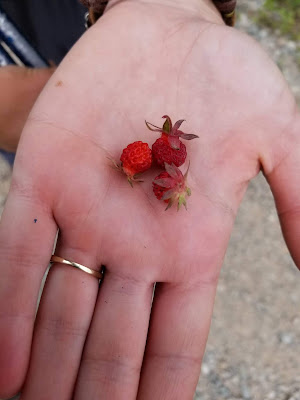 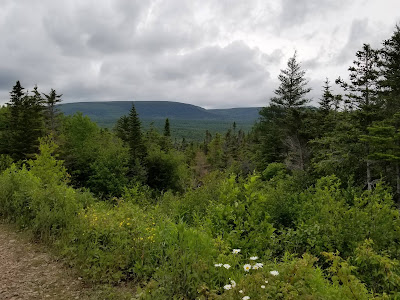 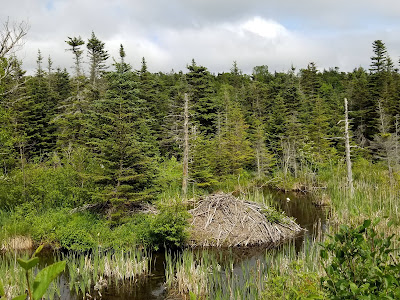 Because we had a late start we decided to find a place to camp after around 20 km. We stopped beside a small lake and found a secluded spot tucked into the trees to pitch our tent. The lake is beautiful, but it has a beaver dam on it that looks like it could house a beaver the size of a black bear. 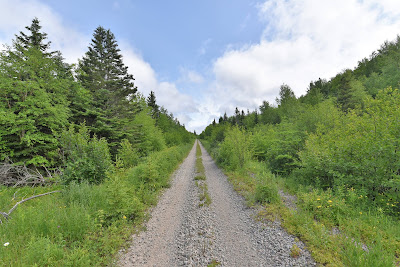 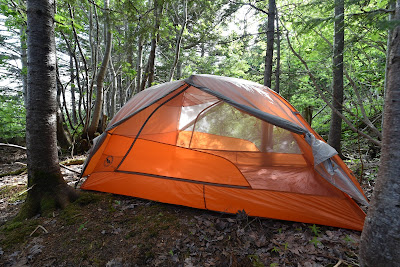 As we fall asleep we can hear the sounds of the Trans Canada Highway, a red squirrel telling us off, green frogs calling in the pond below, a Swainson's Thrush, an American Robin, and a White-throated Sparrow singing, and a pack of coyotes yipping fairly close by.  Just as we began to doze off we heard a Boreal Owl pass by, right above our tent!!