The Great Trail in Newfoundland

It has taken us just over 40 days to cross Canada's most easterly Atlantic province - Newfoundland.  Amid our trek we have hiked across The East Coast Trail, the Grand Concourse, and The Great Trail.  After over 1200 km of hiking we have come to the end of our first province in this 3 year, 24,000 km venture from coast to coast to coast.  To read about the beginnings of our hike in Newfoundland check out our article on The Trek The Great Trail – The first 225 km of a 24,000 km trail!  and to learn about our venture as we entered the centre of the province check out our second article The Great Trail – Halfway Through Our First Province at 450 km of a 24,000 km Trail

Over a month after starting, it is difficult to summarize what our #hike4birds along the Great Trail has been like in the western half of Newfoundland. Words that come to mind include diverse, wild, rugged, remote, vast, and beautiful, but none of those descriptors even comes close to capturing what the experience has been like. 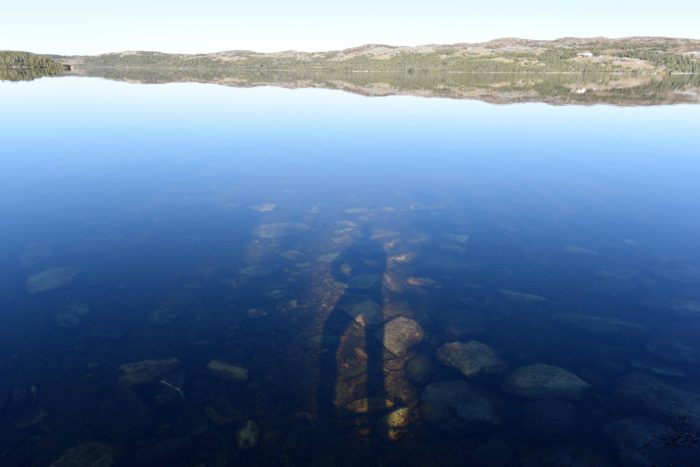 After leaving Badger, the Great Trail took us up into the Topsails region of Newfoundland. This 100 km stretch of trail climbed into a vast, open landscape dotted with tiny lakes and large tolts, which are steep rocky formations jutting out of the landscape. A few scattered cabins and lodges can be found in this stretch, but human development was largely absent. The sense of remoteness, isolation, and wilderness was very strong, and most days the only sounds were frogs calling, birds singing, and the crunching of our own boots on the gravel railbed. 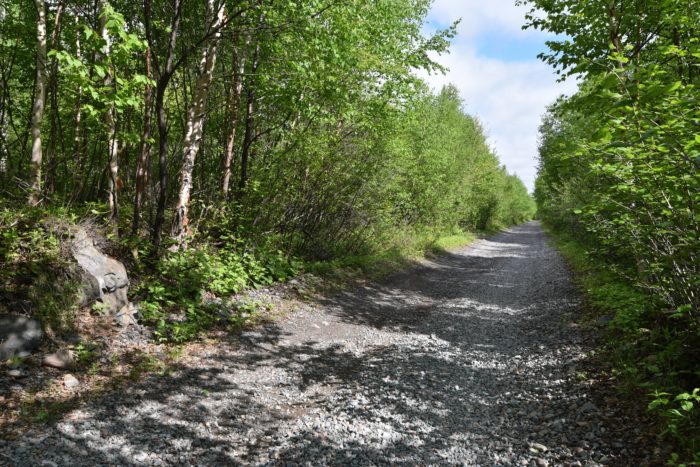 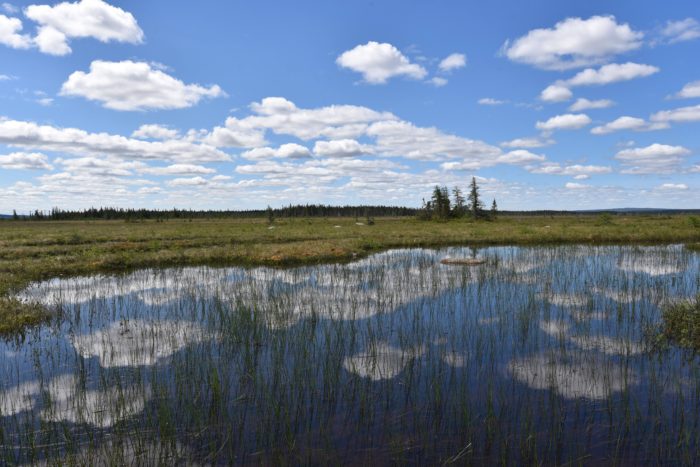 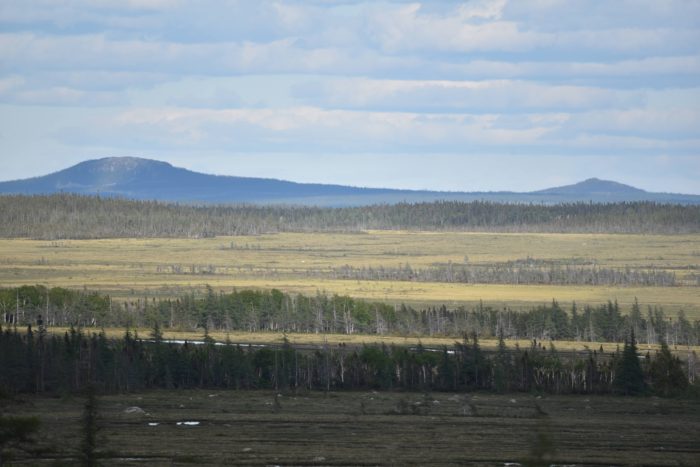 The ecology of this area is similar to that of the sub-Arctic Tundra, so there is a chance to see Rock and Willow Ptarmigan there. We were fortunate to see a herd of nine adult Woodland Caribou with seven babies, two Moose, and four Black Bears! One of the bears appeared beside the tent as we were making breakfast, but it mostly just seemed curious. The other caused a bit of excitement when it came galloping at full speed down the trail straight towards us. It finally noticed us when it got within a few meters, stopped, perked up its ears, and dove into the bushes. 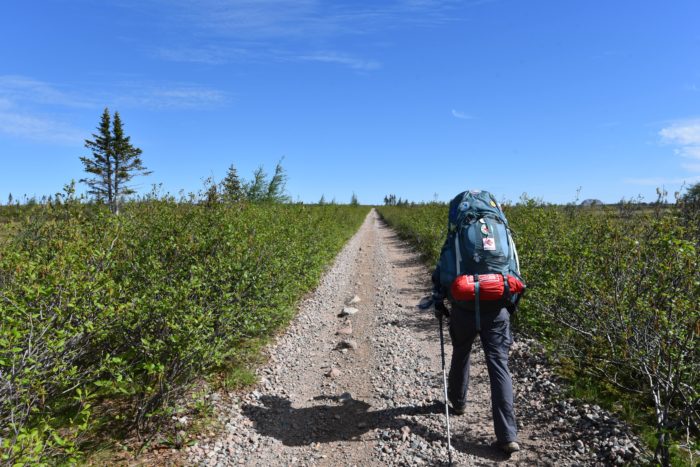 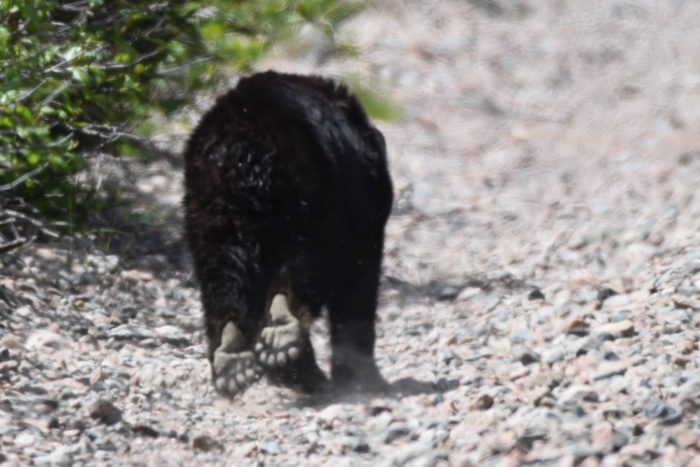 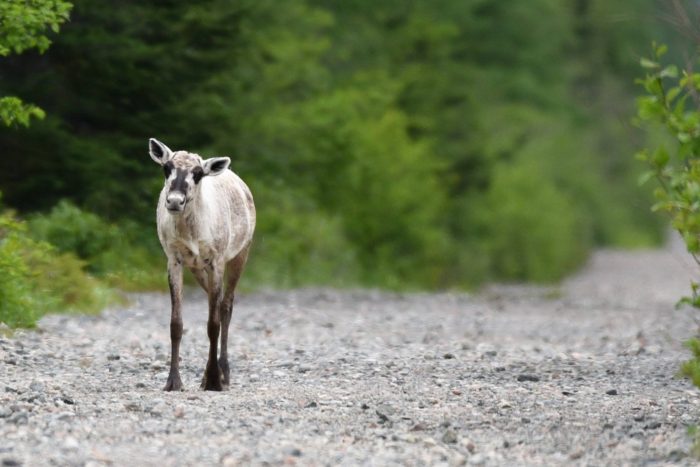 After crossing the Topsails we arrived in Howley, a small community in central Newfoundland which is known as the location where moose were successfully introduced to the island in 1904. The stretch of trail from there to Deer Lake was forested, and followed many lakes and rivers, which provided nice easy camping, great views, and lots of opportunities to see waterfowl, such as Common Loons and Red-breasted Mergansers and shorebirds. 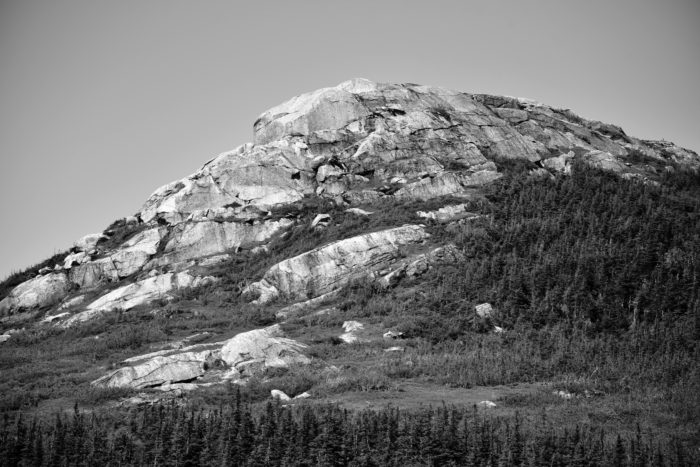 From Deer Lake we took a detour up to Gros Morne National Park, which was designated as a UNESCO World Heritage Site in 1987, and is also an Important Bird Area. It is internationally known for its stunning scenery, unique and fascinating geology, rich cultural history, wildlife viewing opportunities, and world class hiking trails. Our stay was cold and rainy, but we managed to hike the beautiful Baker's Brook Trail to a waterfall, give a talk at the Visitors Center on connecting youth to nature through birding, and to add a few species to our bird list, including the Black-backed Woodpecker. 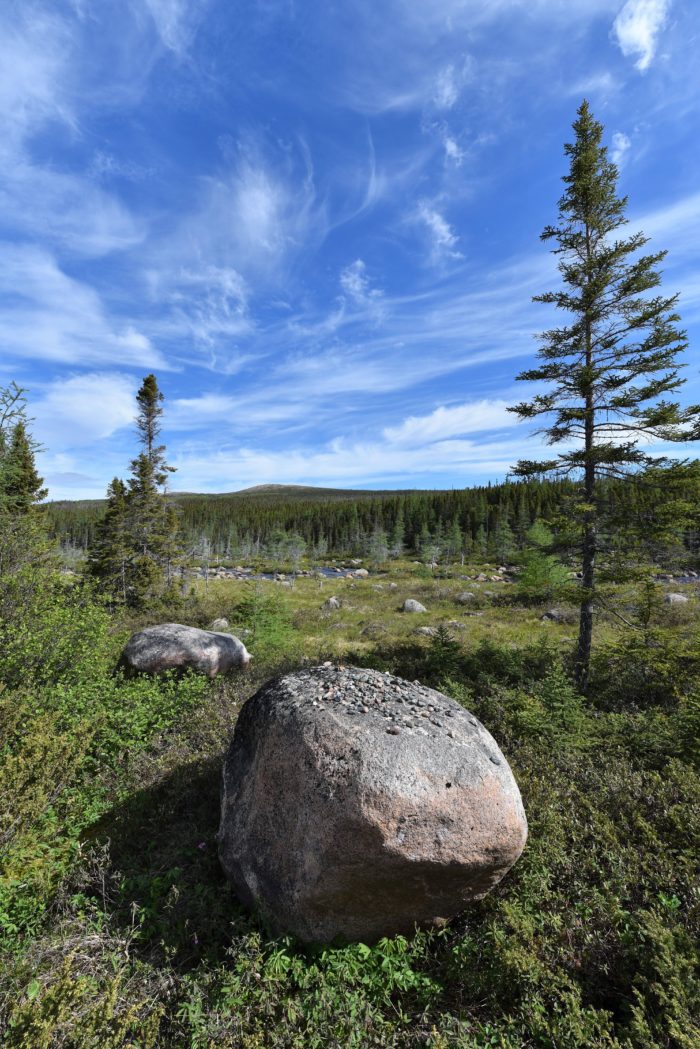 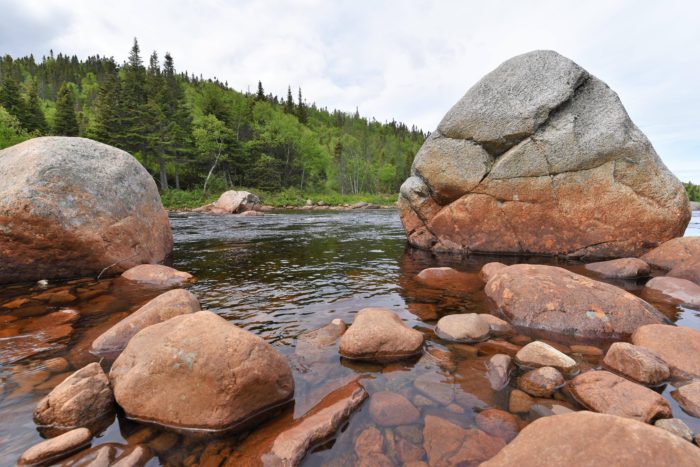 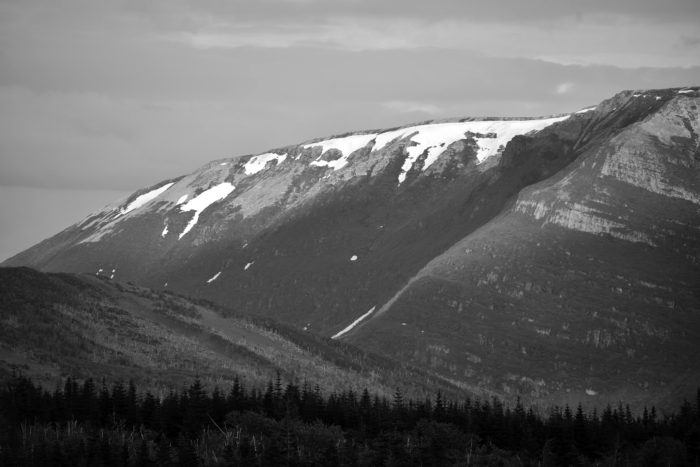 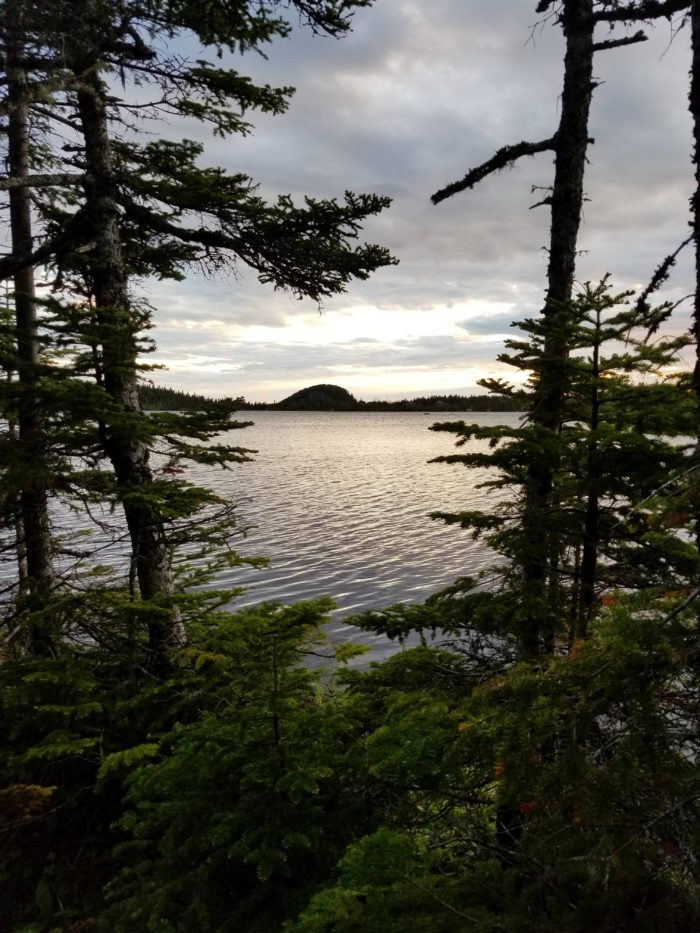 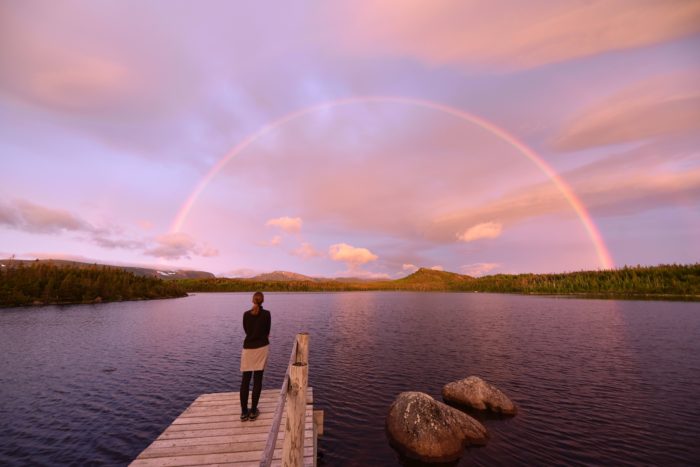 From Deer Lake to Corner Brook the Great Trail skirted the edge of the very large and long Deer Lake, and then followed the Humber River for much of the hike. The forested walk along the lake offered beautiful views of crystal blue water with tall green mountains in the background. There were also many warblers, sparrows, and finches in this stretch. Birding highlights included seeing White-winged Crossbills, Pine Grosbeaks, Ruby-crowned Kinglets, and Black-throatted Green, Black-and-white, and Yellow Warblers. 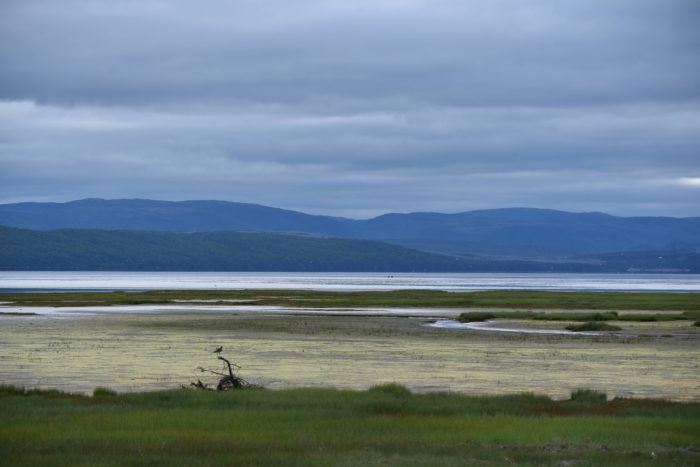 At the west end of Deer Lake the trail brought us to the resort town of Steadybrook, which is located at the foot of the Marble Mountain Ski Resort. We enjoyed seeing the Newfoundland Heritage Tree, which is a totem pole that depicts the history of Newfoundland and Labrador. It was carved from a giant Cedar tree that was brought from Canada's West Coast, and is symbolic of how this country is connected. 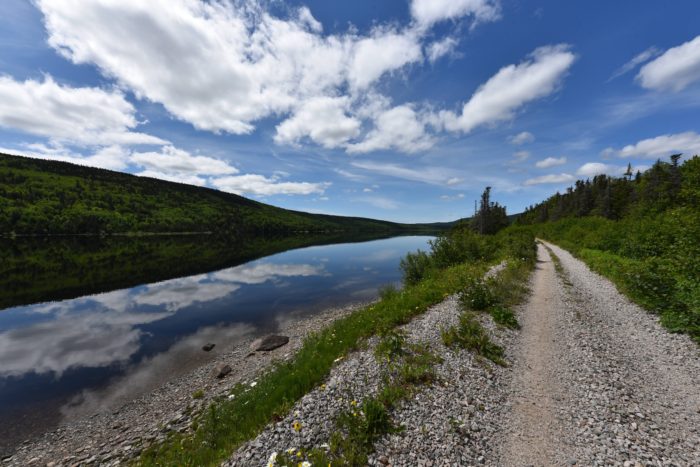 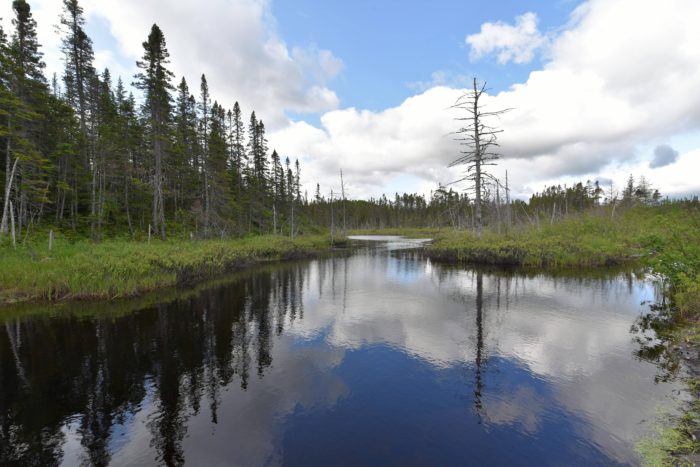 Corner Brook is the largest town on the west coast of Newfoundland, and it is located in the hills around a large harbour. The trail skirts the harbour, offering beautiful views of mountains, ocean, and city that are similar to what might be expected in Vancouver, BC. 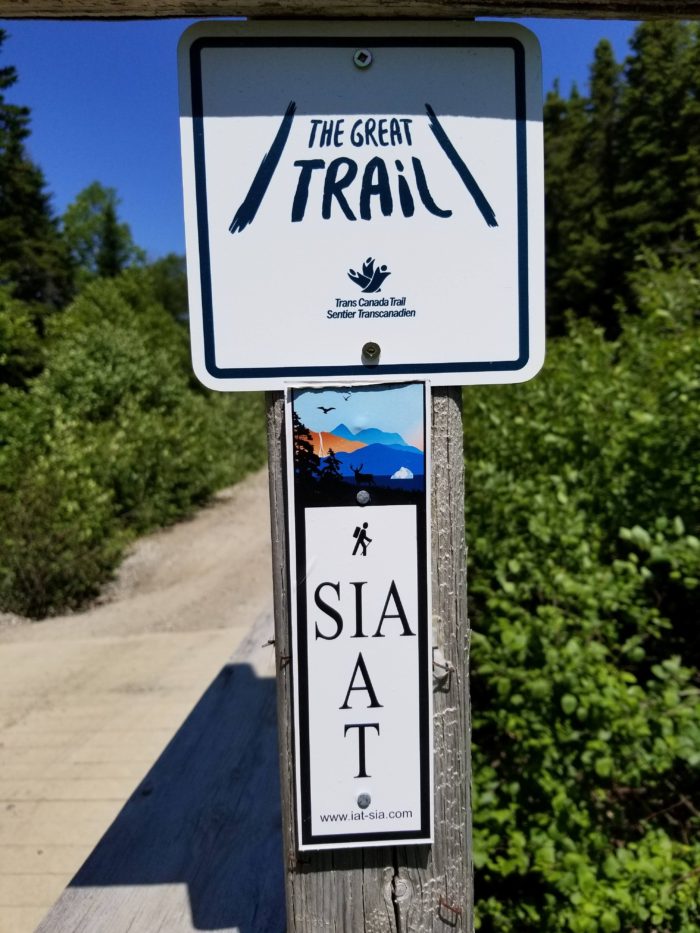 After Corner Brook the trail climbed up into the Appalachian Mountains, and joined a section of the International Appalachian Trail. The forested mountains, small lakes, and panoramic views down steep river valleys were amazing, and unlike anything we'd walked through on the island. 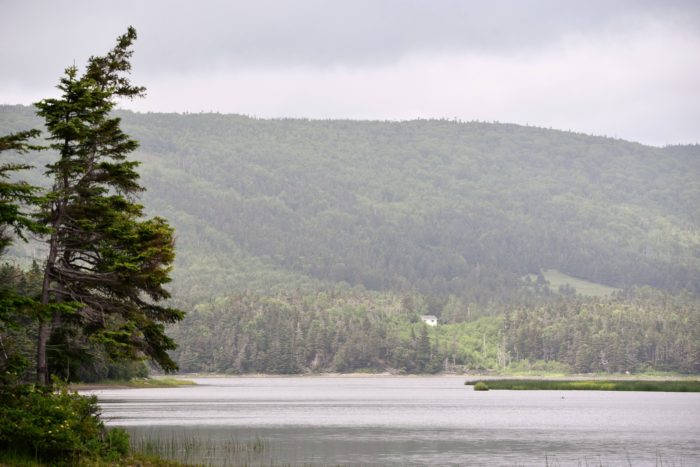 Coming down out of the mountains, we found ourselves in the coastal community of Stephenville Crossing. There the trail took us through an estuary, where we had a close-up view of a Common Loon fishing a few feet off shore, and saw a pair of Willets. On the ocean side we found ourselves beside tall, golden sand dunes. 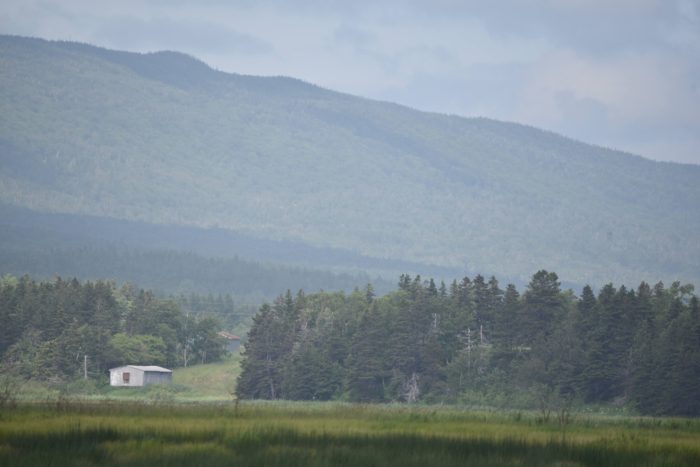 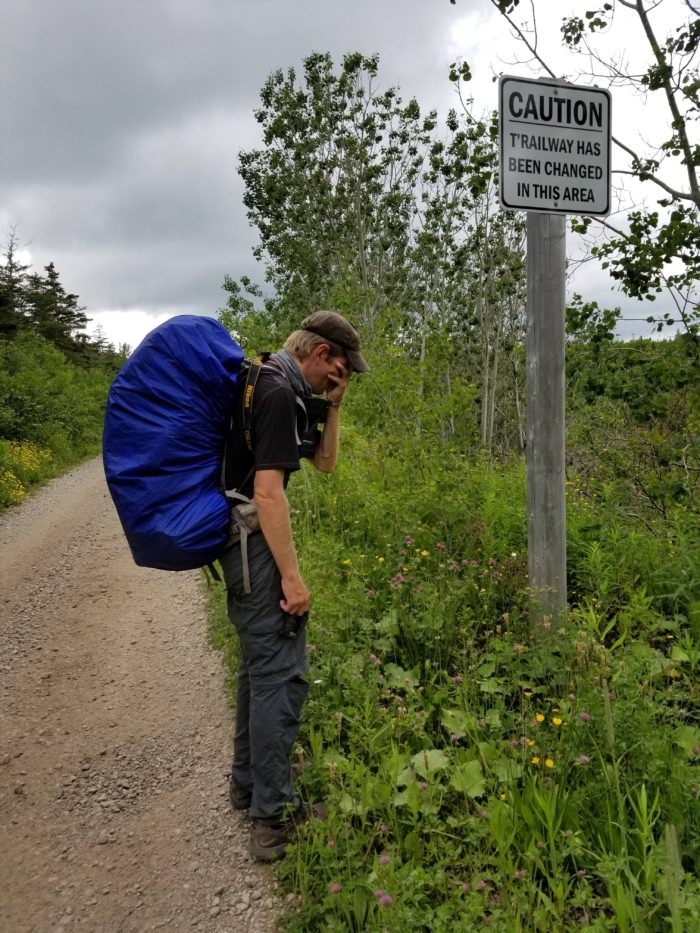 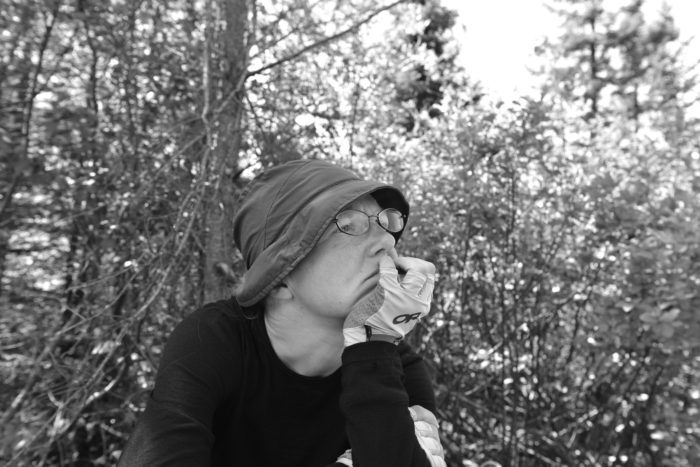 The next few hundred kilometers of trail took us through forested country, often alongside wide, flat, rocky rivers which provided habitat for salmon, brook trout, and other important game fish. We saw many fly fishermen in this stretch, practising their art. 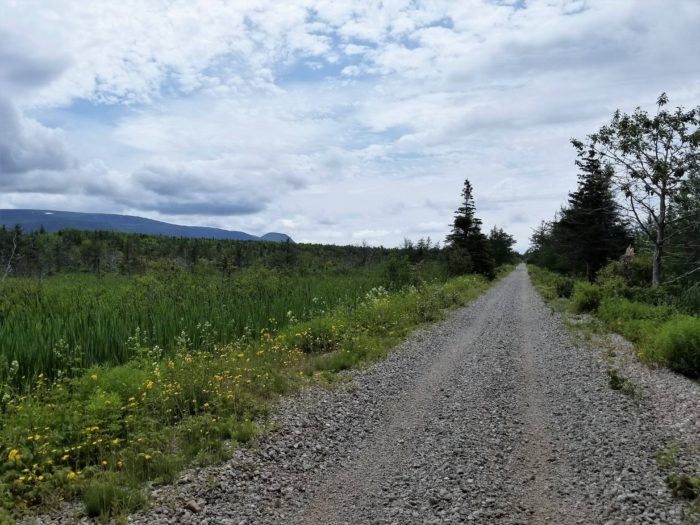 Around Doyles the trail took us through the Codroy Valley, which offers world class birding opportunities for both waterfowl and forest birds, as well as several hiking trails, fishing excursions, and other recreational opportunities. While in this area we visited the Codroy Valley Estuary and Codroy Valley Important Bird Areas, both of which we interesting, beautiful, and well worth a visit. 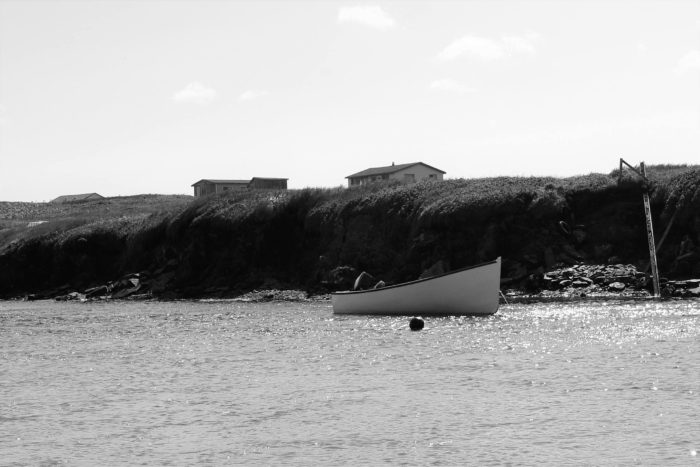 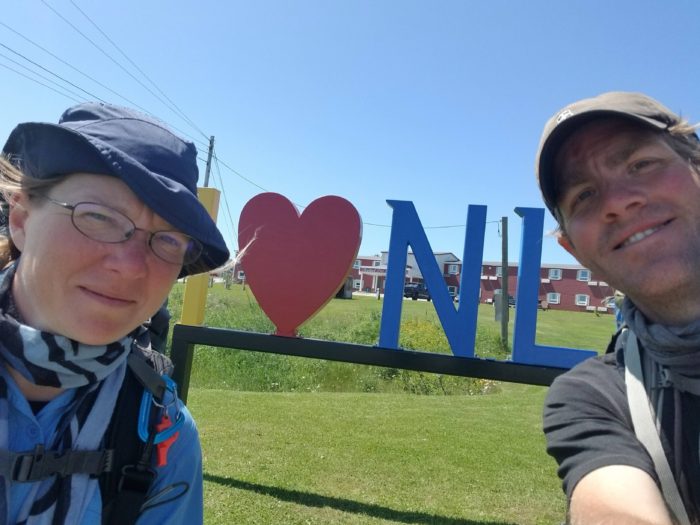 The last stretch of the Great Trail took us right along the coast. We hiked the windy, exposed, cliff tops around 'The Wreckhouse', where the wind is famous for derailing the trains that used to go through this there, and today presents a danger to RVs, trucks, and other rall vehicles during bad weather. We then walked along miles of sandy beaches, and beside inland tidal pools and estuaries, through a landscape of tall grasses that waved in the wind, short s ruby shrubs, and wind-whipped, sturdy, tuckamores.

Having walked 300+ km along the East Coast Trail and now 890 km across Newfoundland from Cape Spear to Port aux Basque, at the end of the trail is the Ferry Terminal for North Sydney, Nova Scotia - our second province!
Posted by Sonya and Sean at 7:37 AM