This morning arrived dew-free and sunny, although we could tell it was going to be a hot day. As we packed up, we noticed that the bird-scape here is different. There were at least three American Robins singing, a Red-eyed Vireo, a Wood Thrush, and a Dark-eyed Junco around our campsite. Most of those species are typically associated with deciduous forests, and not the Boreal. 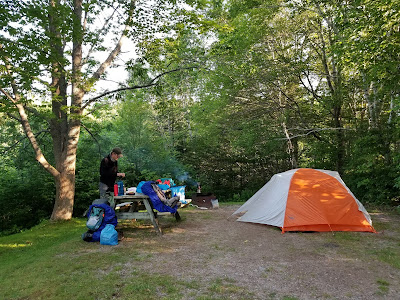 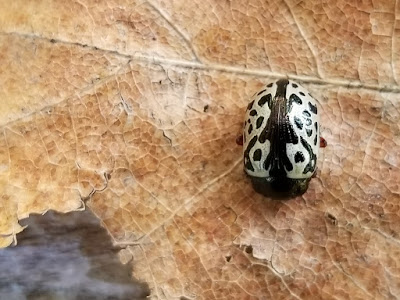 As we left the campground I had a moment of extreme sadness. My Komperdell walking sticks, which have travelled 3,500 km of trail with me, had to be laid to rest and left behind. When we walked along the coast on our last day in Newfoundland they got covered in salt. Since then they have gotten more and more difficult to adjust, and then they seized up, unfortunately at different heights. We tried washing them with water, and soap, and oiling them (we didn't have vinegar). Nothing worked, so with much sadness I had to bid them farewell. 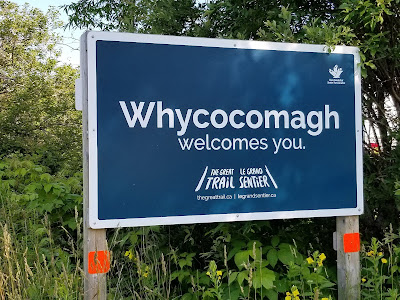 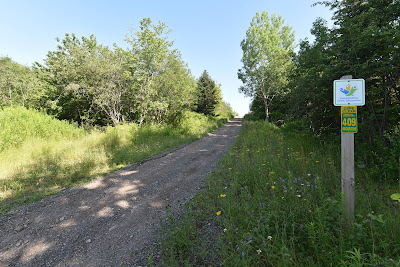 When we reached the turnoff from the highway onto the trail we had a moment of confusion. We were looking at the App, which suggests there should be a turnoff from the highway just west of Johnson Lane. We looked, but only saw two driveways, and didn't recognize any obvious alternatives. As we wandered around in confusion a car pulled over and a man very helpfully told us to head about 20 m down Johnson Lane and then we would see the track. It turned out he was right, and we silently thanked St. Roch for once again providing help. 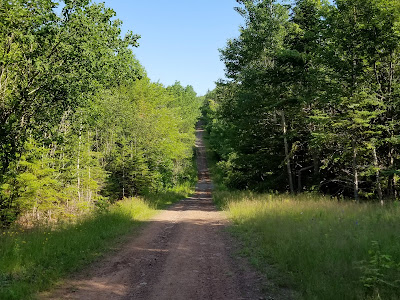 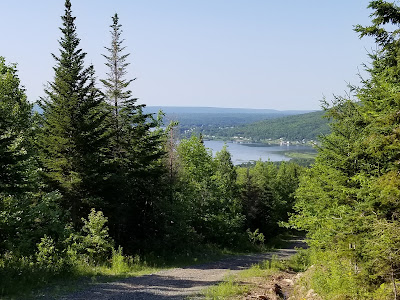 Almost immediately we could tell that walking this trail would be a vastly different experience. There was a big sign for the Great Trail at the beginning, and a metal gate. We were delighted to find that the trail itself was a wide, perfectly graded gravel road. It was fine, hard packed gravel, which made walking on it easy. As the day progressed we passed many Trans Canada Trail markers, all with arrows! They were located on small metal posts every 1-2 km, and at every intersection, along with signs that included distances to the various destinations. We felt positively spoiled! 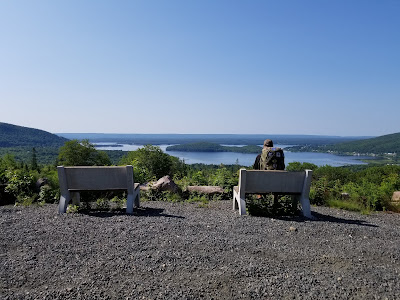 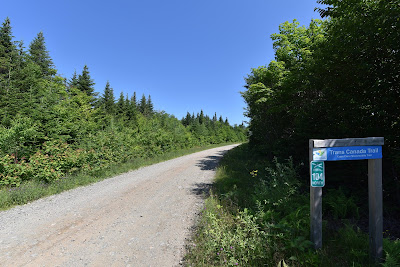 Our first five kilometers involved an elevation gain of 350 m. Although we aren't used to climbing that steeply, it wasn't too bad, and about half way up we found two benches with a fantastic view out over Bras d'Or Lake. The rest of the day was very hilly as well, which was another change from our hike across Newfoundland. 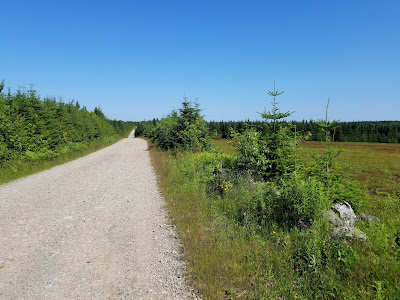 Once we reached the top of the climb we found ourselves surrounded by deciduous forest that seemed to be a mix of yellow birch, sugar maple, white birch and balsam fir. We did walk through sections that had been cleared at some point in the recent past, and to our surprise we passed quite a few blueberry farms! We also saw an abundance of Snowshoe Hares.

As we got back into the more forested section we heard American Robins, Blue Jays, Black-capped Chickadees, Wood Thrushes, Red-breasted Nuthatches, Dark-eyed Juncoes, American Goldfinches, Red-eyed Vireos, Ovenbirds, a family of Hairy Woodpeckers, and White-throated Sparrows. Although a few of these species were present in Newfoundland, the sound of the trail here is definitely different than it was. 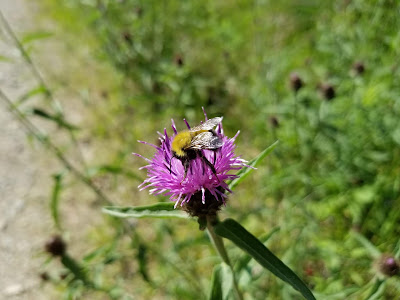 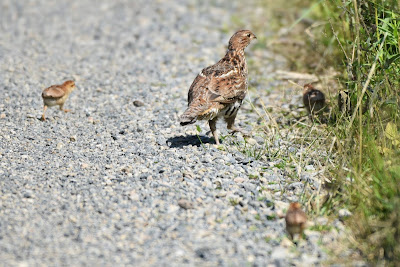 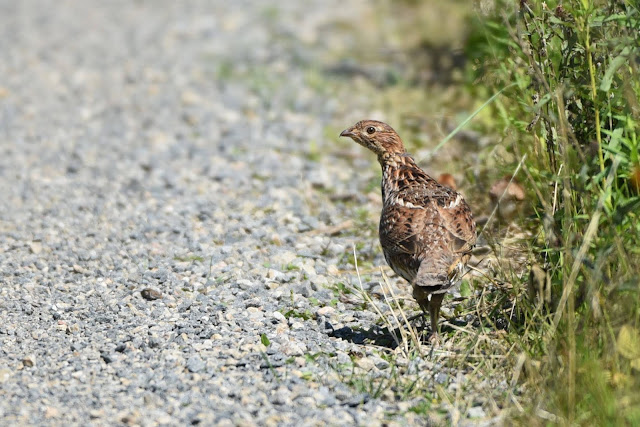 One of the birding highlights of today was spotting a Ruffed Grouse walking slowly across the trail about 50 m in front of us. As we got closer we watched carefully, and soon a tiny puff-ball baby came scurrying as fast as it could across the trail. Zoom! Another one soon followed, and then another. It was very cute! 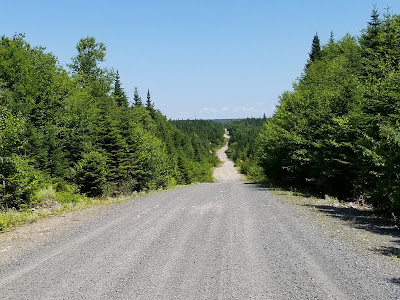 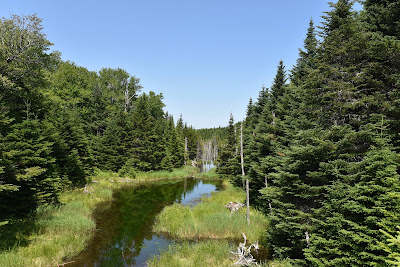 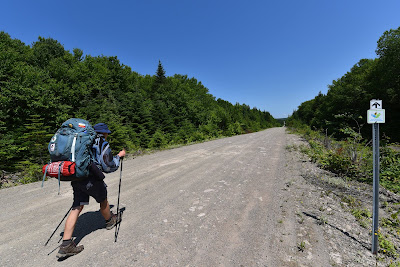 As the day progressed we found ourselves in a logged area. The predominantly balsam fir forest had been logged in long strips, about half as wide as the canopy height. It looked like the forestry company had done a good job, removing the felled trees without damaging the standing ones. However, the trees on the edges of the strips had mostly died, likely as a result of shock from the sudden increase in heat and light. This method of logging is supposed to be less environmentally damaging than clear cutting, and it seems to be. As we looked down the trail we felt like we were in a forested landscape, and we could still hear Red-eyed Vireos, American Robins, and Wood Thrush singing. However, looking at a satellite image of the area we hiked through shows how much change has occurred there, and the amount of brush on the forest floor looked like it could lead to a pretty big forest fire. 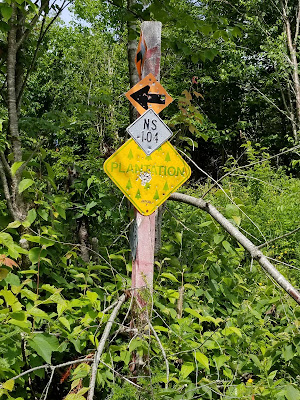 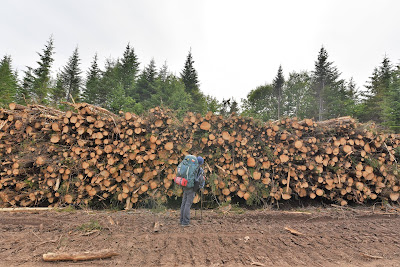 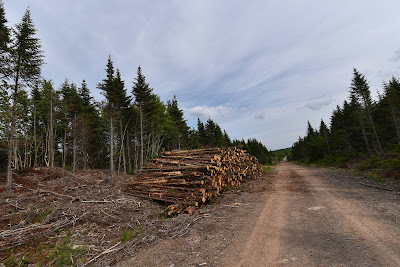 As we continued to hike through the hot sunny afternoon we began to get a little worried about our water supply. We passed a lot of dry streambeds, many of which had moose tracks along them. It seems that other animals were also feeling the shortage.

Finally we came to an area that was actively being logged. The piles of logs were stacked on the side of the trail, the trailbed was ripped up, and the huge skidders and other machines were parked in a clearing nearby. The smell of freshly cut forest, which isn't entirely pleasant, filled the area.

Beside the newly cut area was a small stream of fast-running water in the ditch. We stopped to filter some of it, drank quite a lot of it, and generally got ourselves wet in a fit of silliness. It was so hot it felt great to find water.

Not too long after the logged section we turned onto what looked like a much older logging road. It was narrower, less recently graded, and rather steep and winding. It was a nice change, and the mossy forest on either side, which was lit up by beams of sunlight, was very beautiful. We wound our way steeply down into a deep valley, and at the bottom found a trestle bridge over Trout Brook. 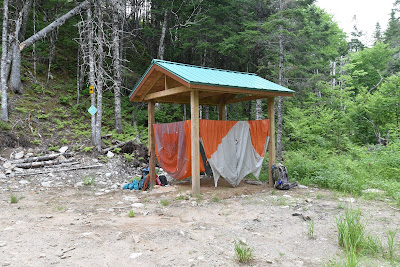 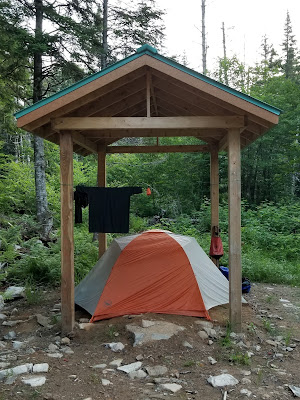 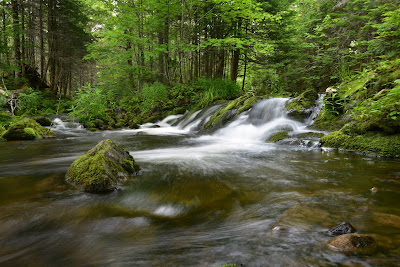 Trout Brook is a small but deep and fast flowing brook. To our surprise we found a small shelter on the far side of the bridge. We hung our tent up to dry under the roof and went for a small dip in the brook. It was freezing, but it felt so nice! We then did laundry, and finally made dinner. It is a lovely spot to camp.

It was a lovely day, during which we saw only three people on the trail - a friendly blueberry farmer in a car who stopped to chat, and a pair of guys who sped past on ATVs in a cloud of dust. As we go to sleep we hear the bubbly, happy song of a Winter Wren. This is my favorite bird, because it is a tiny ball with a perky stick of a tail and yet it can sing so loudly, happily, and long. It is very cheerful sounding. It is a good feeling to be back on the trail!