Today we began our approach to the Codroy Valley region, which offers world class birding. We weren't disappointed! While we were making breakfast, we saw a Swainson's Thrush, a Red-breasted Nuthatch, a pair of Black-and-white Warblers, a White-throated Sparrows, an American Robin, a Ruby-crowned Kinglet, a Yellow Warbler, and an American Redstart. We also heard Common Loons calling on the lake opposite our campsite. We almost decided to stay put and just see what else showed up at the campsite! 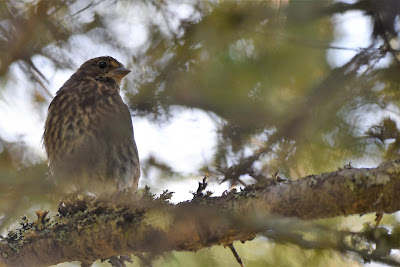 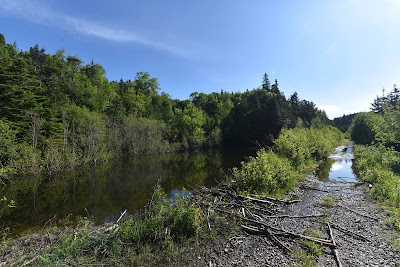 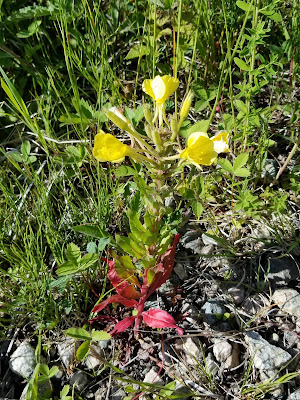 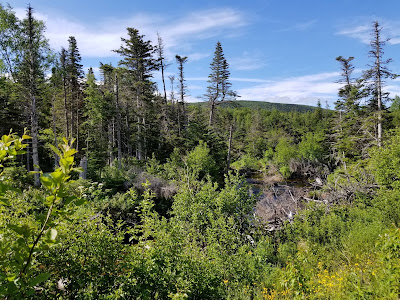 Reluctantly we headed out, and almost immediately began to climb again. The trail followed beside a beautiful rushing river that we caught glimpses of far below us through the conifers. The shafts of morning sunlight coming through the trees were magical, but sadly the day was rapidly getting hot. 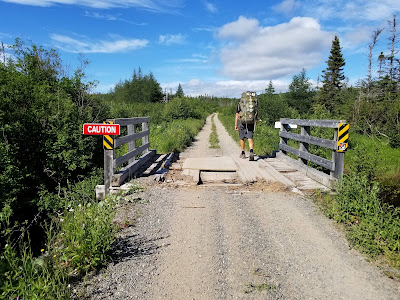 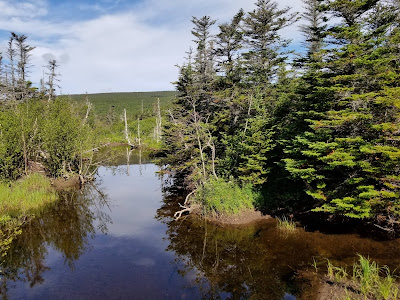 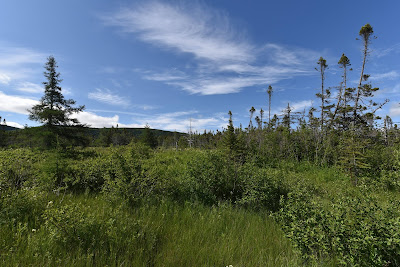 About 4 km into our hike we came to a small lake, and were delighted to find a whole assortment of warblers and other birds foraging in a stand of white spruce and tamarack. Among the highlights were pairs of Balck-throated Green Warblers, Magnolia Warblers, and Black-and-white Warblers, a Ruby-crowned Kinglet, a White-throated Sparrow, a Wilson's Warbler, and a Lincoln's Sparrow. A group of three Cedar Waxwings also flew over as we watched. We greatly enjoyed this spot, and spent quite a long time there happily birding in the hot morning sun. 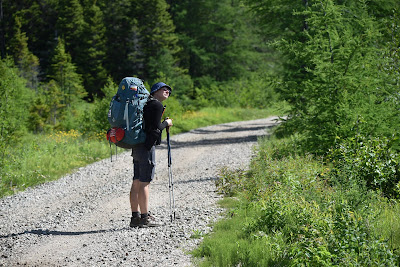 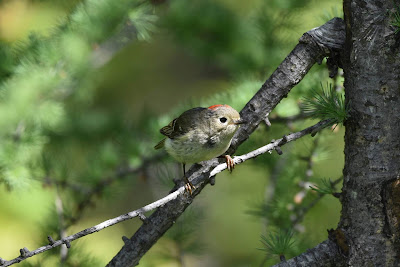 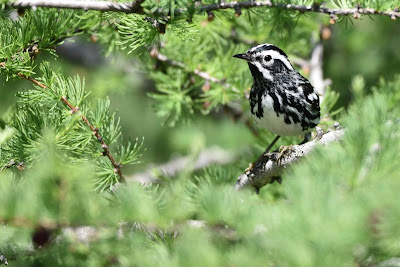 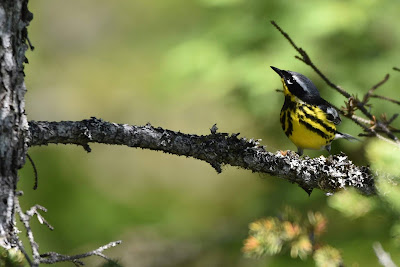 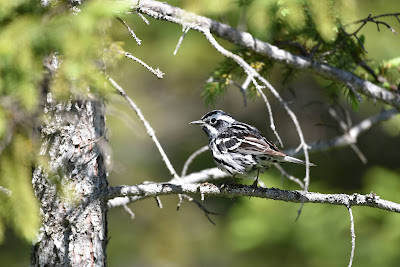 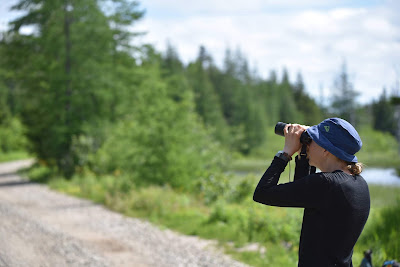 When we set off again we crossed under the Trans Canada Highway, and found ourselves passing a group of cabins before coming to Codroy Pond. This was a long, deep, black pond which gave stunning reflections of the treed mountains on the opposite shore. It was very beautiful, but the flies were thick - blackflies, mosquitos, and deer flies! 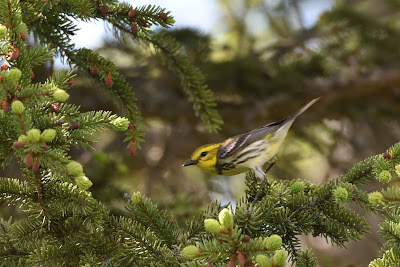 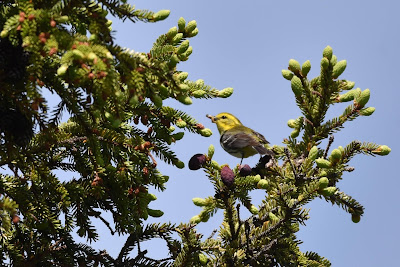 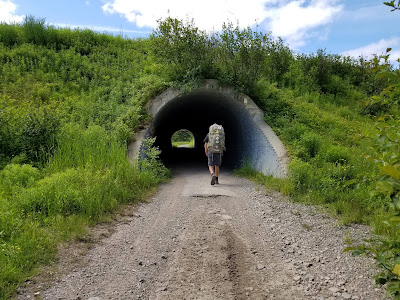 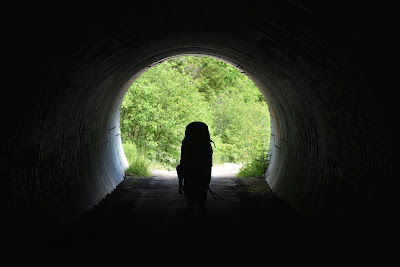 We paused to watch a Common Loon fishing in the still water, and marvel at the distances it could cover under water without coming up for air. We were also delighted to see an adult Spotted Sandpiper feeding two chicks on the shore. We only caught a glimpse of the chicks, but they were very fuzzy and cute. 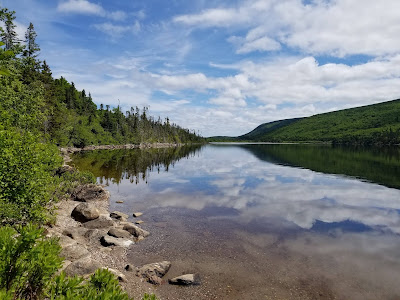 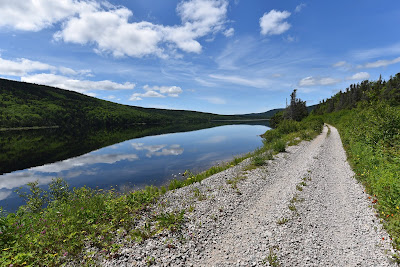 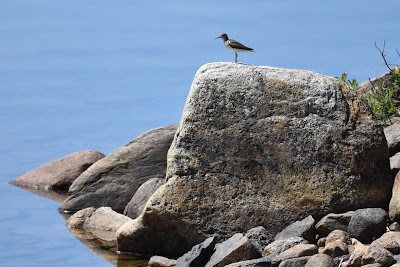 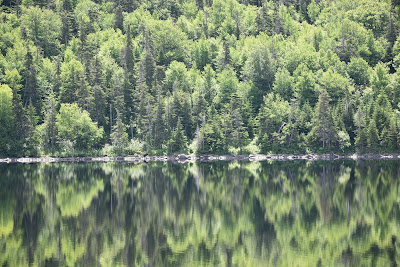 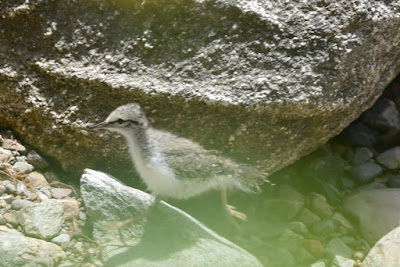 After passing Codroy Pond we had a long, hot, shade-less walk for another 15 km or so. Many of the bridges we passed in this section were in need of some TLC, but curiously there was official signage recognizing the need for repairs.  I guess the TLC has been a while in coming. 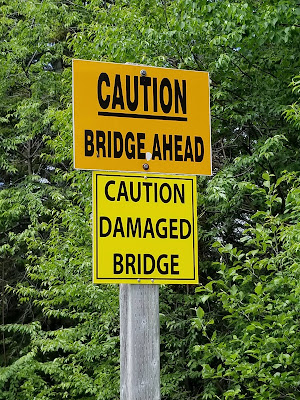 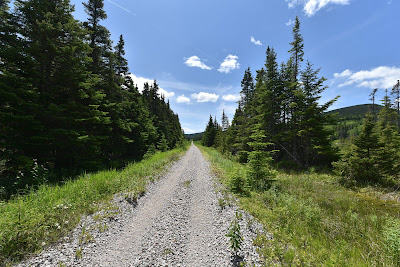 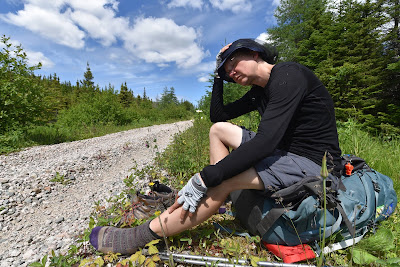 When we came to the second highway crossing of the day we had a surprise. The trail had been re-routed, and we didn't know why until we reached the highway. A beaver had flooded the underpass with about 4 ft of water! We would have had to swim. Luckily, just as we were wondering whether we needed to scale a steep embankment on the other side of the highway (and lake) to regain the trail we saw two ATVs pop out onto the highway a ways down the road. We walked up the shoulder of the highway and were soon on our way once again. 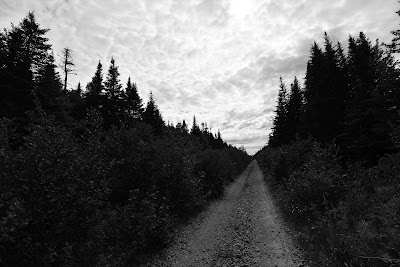 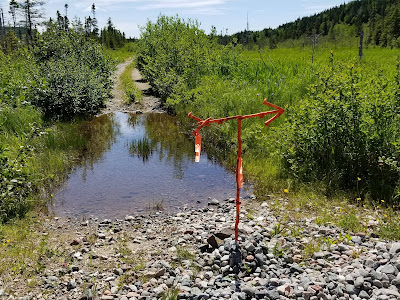 After the highway crossing we again found ourselves walking beside a wide, rushing river, but since we were climbing still, it was far below us. Eventually we crossed a bridge, beside which was a nice looking campsite, but there were four fly fishermen on it. They called up a greeting to us, mentioning that there were salmon below the bridge. 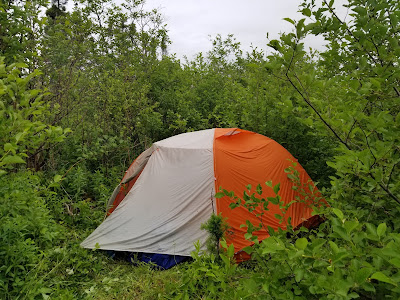 The last few hot kilometers were tough going, but eventually we made it to a small pond and found a very small thicket of shrubs to pitch the tent in. We were both pretty tired, but we are glad to have found water at last and a place to rest. The calls of the green frogs in the pond beside us are very loud as we fall asleep, and for the second night in a row we can hear the calls of not one but two Boreal owls!
Posted by Sonya and Sean at 4:51 PM