We headed out of Stephenville Crossing around 8:30 am, but almost immediately got distracted by birds. The trail out of town follows the light yellow sand dunes of the coast. On one side is the Atlantic Ocean and the Trans Canada Highway, and on the other is an estuary. 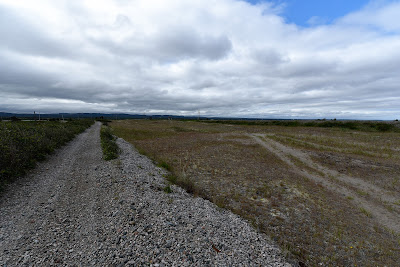 This morning the estuary was full of interesting birds, and we spent quite a while enjoying them. Among the highlights were two families of American Wigeons, a Common Loon fishing a few meters off shore, two Bald Eagles sitting on a sandbar, a pair of Willets, an Arctic Tern, and a colony of gulls.  All in all we saw 21 species in our short visit to the marsh. 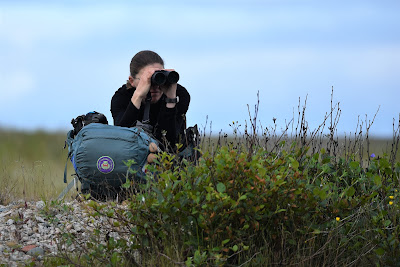 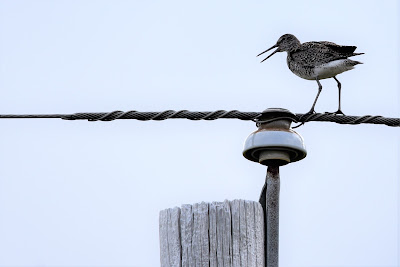 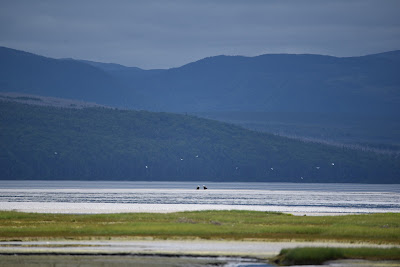 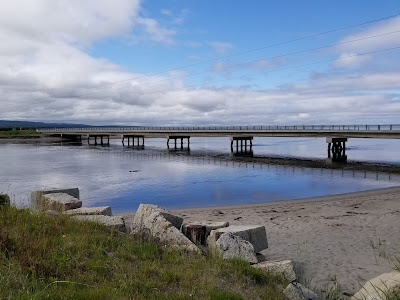 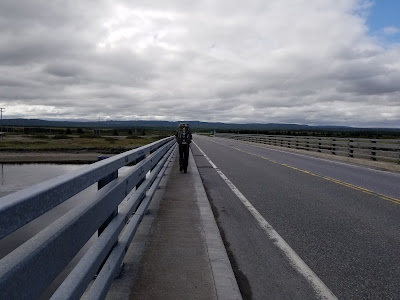 After the estuary we crossed a bridge, and then followed the trail down the coast. The trail was a treed track which every now and again offered views across the sand dunes to the bright blue ocean beyond. It was a warm sunny day, so the cool breeze coming in off the water was very welcome. 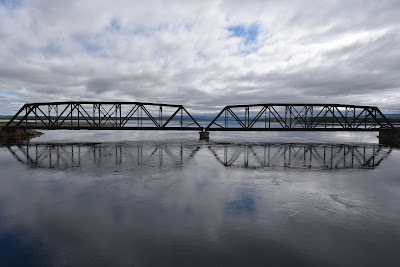 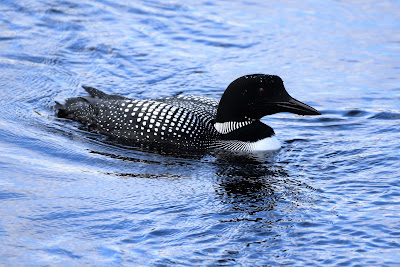 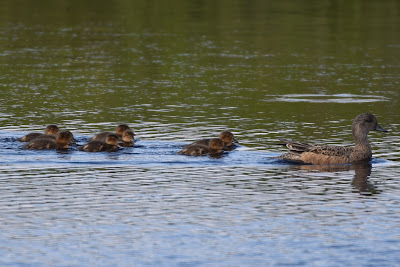 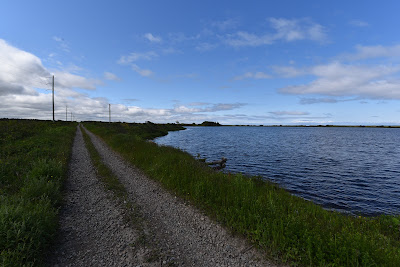 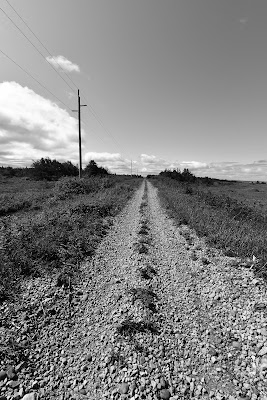 As we walked around the outskirts of town we passed a stretch of houses along the trail that each had one or two large dogs chained up outside. The atmosphere in this stretch was one of suspicion and protection, which wasn't too welcoming. We have received several warnings about the unfriendly behaviour in the area. So far we haven't experienced anything directly untoward ourselves, but for the first time on the island the culture seems less welcoming. 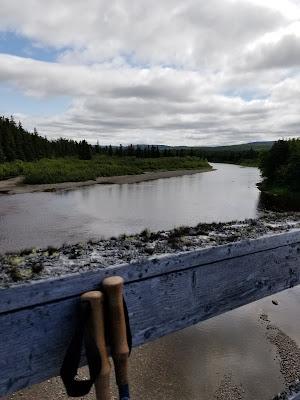 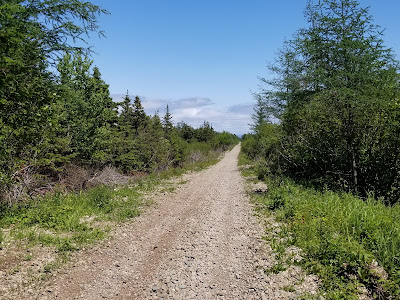 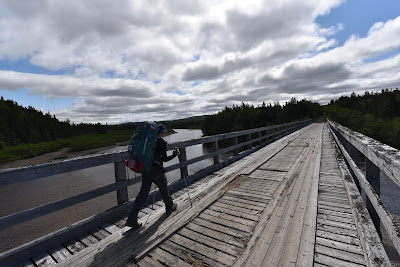 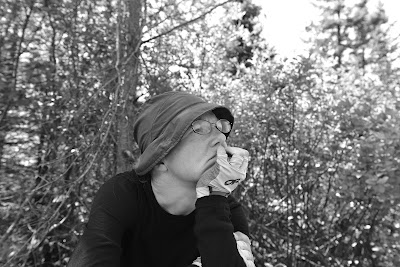 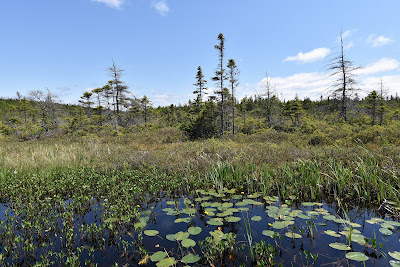 For the rest of the day we walked between open wet meadows and small lakes. We passed the community of St. George, and crossed two long trestle bridges over wide, shallow rivers. The second river was posted as important fish habitat, and there was a fly fisherman at work down in the water.

Just before we reached Flat Bay we found a small pond at the side of the road that was full of frogs! We paused to take photos and enjoy their calls. 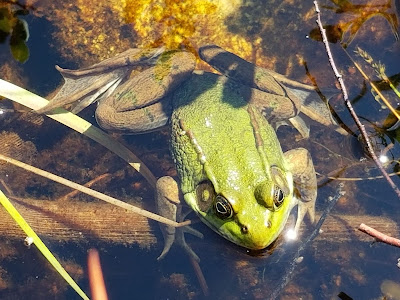 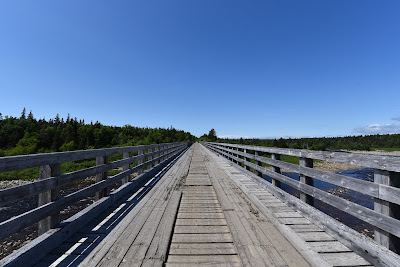 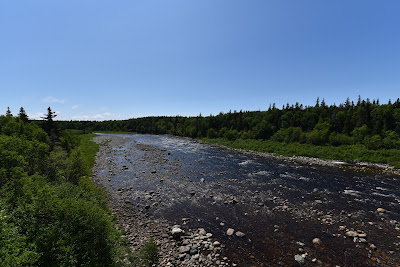 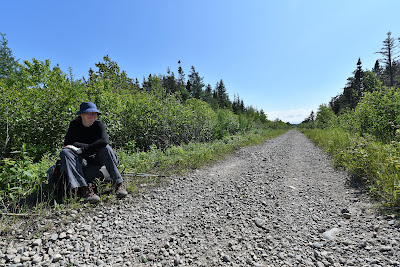 In the late afternoon we came to a series of three small lakes. As we walked we were passed by a convoy of ATVs, and we decided to look for a secluded spot to pitch our tent. We found a clearing a few meters off the trail, and soon had camp set up. As I went to get water I scared a female Ruffed Grouse who was protecting a family of young, and then caused a whole pile of baby ducklings to flush from the edge of the lake. When I returned to the tent to cook dinner I found a Swainson's Thrush nest in the shrubs not far from the tent. Today has definitely been a good birding  day! 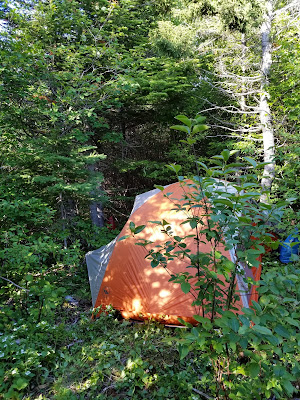 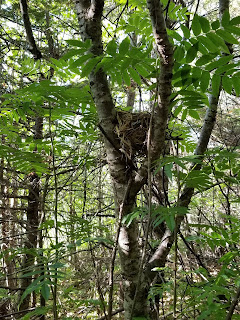 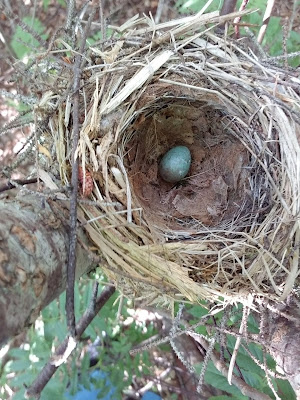